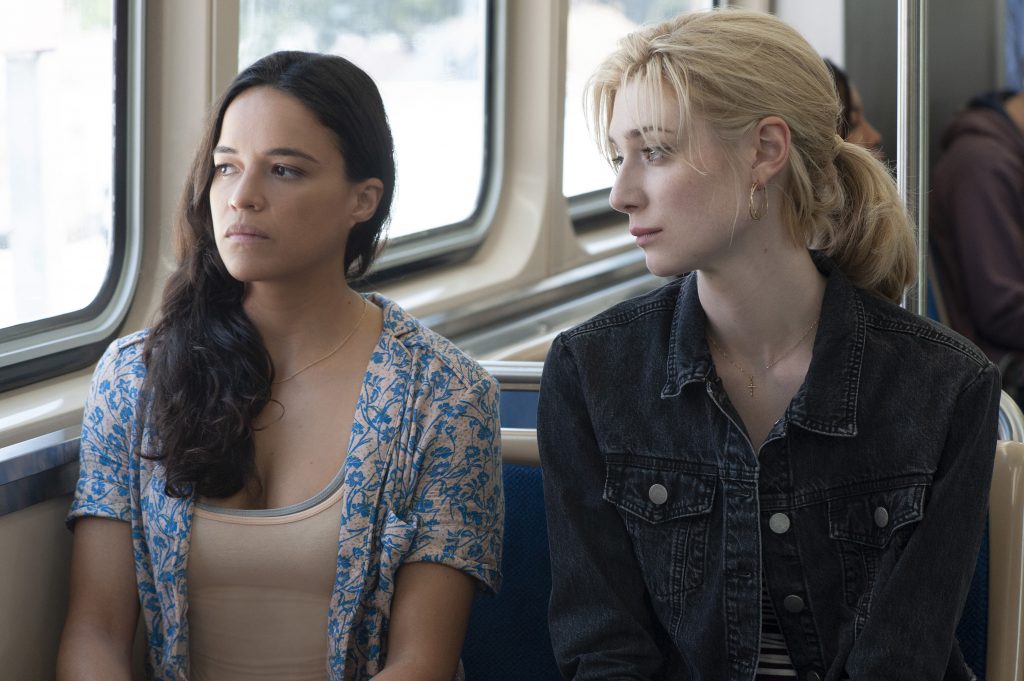 (Plot details key to the concept of “Widows” are mentioned.)

A heist goes wrong. An elderly Chicago alderman at the end of his career (Robert Duvall) backs his son (Colin Farrell, whose Irish accent impishly tweaks through at times) to retain his seat in a redrawn ward, but the change in voter demographics tempt a local crime chieftain (Brian Tyree Henry) with a hair-trigger younger brother (Daniel Kaluuya). Against this canvas, a heist of several million dollars, led by one Harry Rawlings (Liam Neeson) goes south and the crew dies.


This foreknowledge makes the opening sequence—a succession of what will be farewell kisses with their women intercut with the increasing panic of the botched robbery—superbly galvanic, exhilarating while also doomily portentous. The men, whose money was taken, want that money back, and threaten the women left behind if they don’t come up with the millions in a month. Harry’s widow, Veronica (Viola Davis), who works for the teacher’s union, is the reluctant leader of the freshly fashioned crew (testy, tactile Michelle Rodriguez, Cynthia Erivo and Elizabeth Debicki) on a robbery that Harry had outlined but not committed. (It’s big; even grandiose.)

Racial inequity, class disparity, abrupt violence, reigning greed: the layered themes are as Chicago as they come. “What’s so powerful for me is that these four women from different racial, social and financial backgrounds came together to achieve their common goal,” Steve McQueen writes of the adaptation he wrote with Gillian Flynn (“Gone Girl”) of the 1983-1985 British ITV series by Lynda La Plante (“Prime Suspect”). “They understood that by working together they were capable of anything.” (Flynn says of her “dirty valentine” to Chicago, “I wanted that feeling that you could live in a city your entire life and never meet anyone who wasn’t like you.”)

McQueen’s sleek professionalism is reflected in the work of production designer Adam Stockhausen, and especially McQueen’s regular cinematographer Sean Bobbitt: on a formal level, this is late-twentieth-century-style studio filmmaking of high caliber. Performances snap, dialogue crackles. Davis’ delivery of a telling line about guns is amazing, as is her “What makes you think I care about your wants?” McQueen also proves to be a keen student of car crashes and explosions, even working one of them into a deadly plot twist.

And there are so many details that populate but don’t overwhelm the frames: Farrell’s Sean Hannity-purple wash in his gleaming hair. An apartment eyehole at the height of Harry, not Veronica. Understated but integral use of locations, including Fireside Bowl. The most artful-arty shot: a leisurely sequence shot around a car as Farrell and his wife argue inside, unseen, the Midwestern blue summer sky and white clouds obscuring all. Their shelter; their sheltered life: the eight blocks traversed begin at poverty and end at wealth. And McQueen’s love of faces: taut, tight close-ups of many of the actors, but especially Debicki, who delivers a stunning performance that evolves from scene to scene.

My biggest complaint was that, despite being 2:10, it felt rushed. The script was both incredibly in-depth and yet just skimmed the surface. I’d watch a movie of the same time period focused on the Mannings, another of the Mulligans, another of WTF was going on w/ Carrie Coon.

All the actresses are powerful, but Debicki’s transformation as her character gains confidence is at the top of performances I’ve seen this year (including Viola Davis’). With Lukas Haas, Garret Dillahunt, Carrie Coon, Jacki Weaver, Jon Bernthal and Chicago actor Stephen Walker as a weary reporter named “McRoberts.” 129m. Widescreen. (Ray Pride)