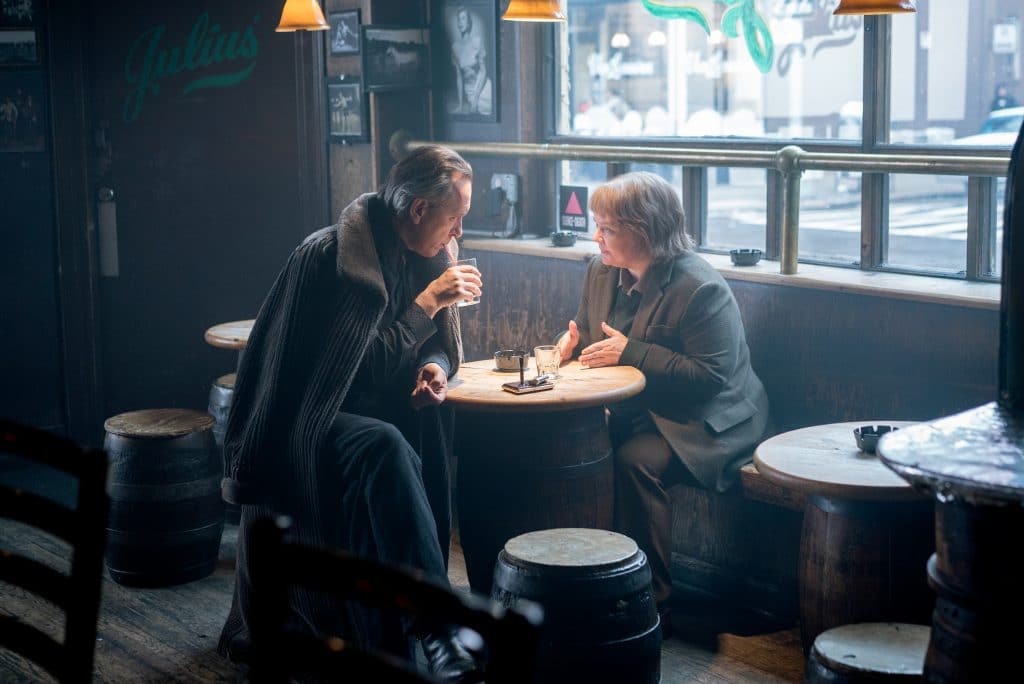 The marvel Richard E. Grant, the master of the impecunious drunkard wastrel, has never laid waste to so much as a drop of tipple. (Grant is alcohol-intolerant.) But movie screens! He devours them avidly and makes a match nonpareil to Melissa McCarthy in the splendidly sulfurous 1990s period piece, “Can You Ever Forgive Me?” Their shared air of bristling odium and the vaudeville of dipsomania supply two of the most memorable malcontents in an age. McCarthy plays Lee Israel, a celebrity biographer who wrote New York Times-bestselling books and articles about such women as Katharine Hepburn, Tallulah Bankhead, Estee Lauder and Dorothy Kilgallen, as a vivid, ribald antihero. Publishers turn away from her work, seen as passé, which urges her toward deceit via one-of-a-kind literary forgeries, with the eager collaboration of her fizzy friend Jack Hock (Richard E. Grant). Adapting a memoir by Israel, screenwriters Nicole Holofcener (“Enough Said,” “Please Give”) and Jeff Whitty (Broadway’s “Avenue Q,” “Head Over Heels”) handed a bravura portrait of a determined woman to director Marielle Heller (“Diary of a Teenager Girl”). Lee is a shit, and the writers and director glory in it. McCarthy? She knows a gift. The portrait of the love between Lee and Jack in their caustic element is scabrous yet ultimately humane. Loneliness and hints of mental illness are momentarily held at bay in moments of gleeful treachery and shared calumnies. The 1990s New York period setting is impeccable, at the corner of money and want. And as a portrait of the precariousness of the writer’s life, “Can You Ever Forgive Me?” is demonically apt. With Dolly Wells, Jane Curtin, Ben Falcone, Anna Deavere Smith, Stephen Spinella. 106m. (Ray Pride)

“Can You Ever Forgive Me?” is now playing at River East, Century Evanston, Renaissance Place and outlying theaters.