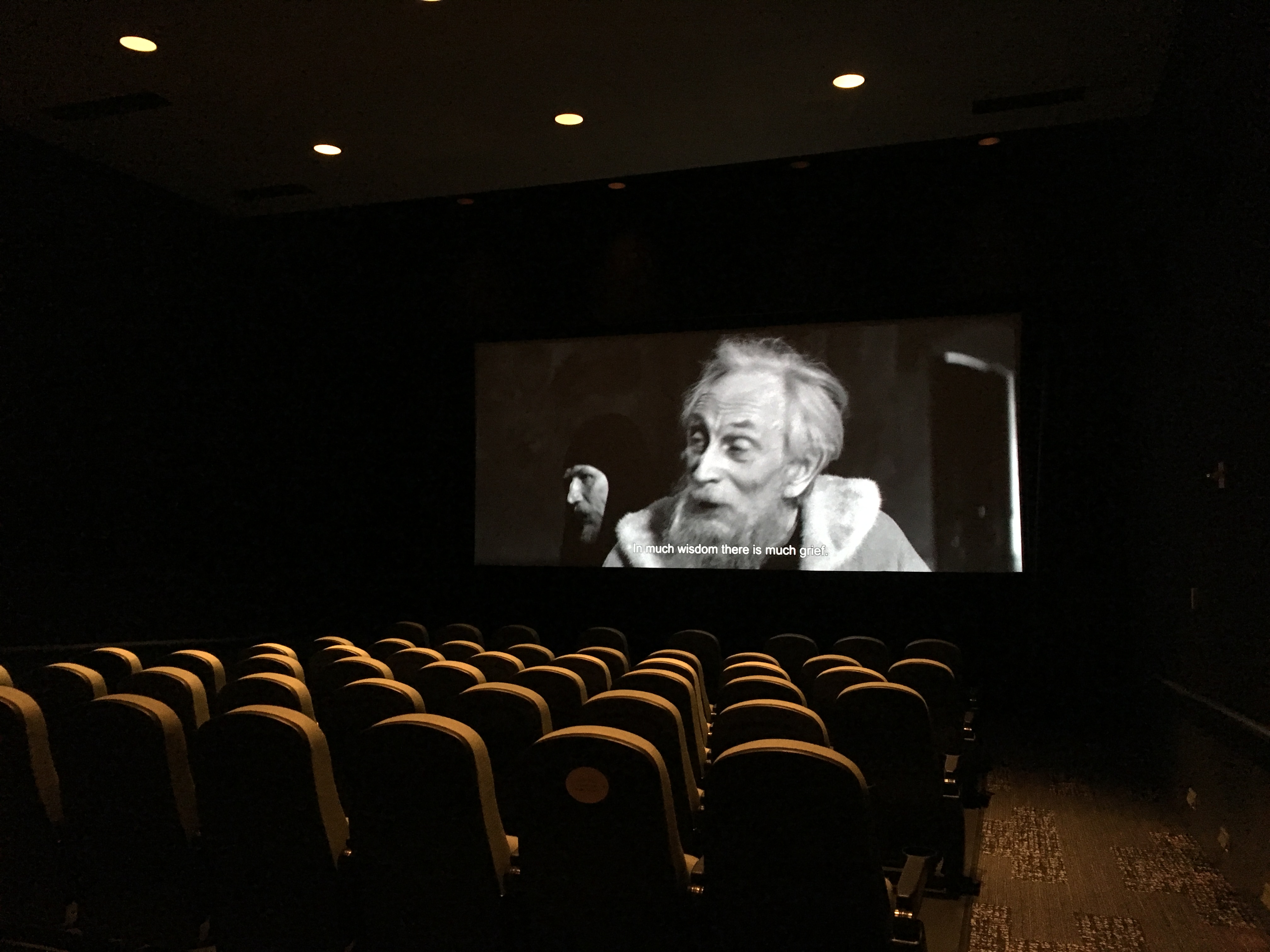 “In Much Wisdom There Is Much Grief”: Frame from “Andrei Rublev,” Siskel Film Center/Photo: Ray Pride

What’s the saying, you can never step into the same stream twice?

Recent movie outings, both fantastic and unpardonable, prompted long (if simple) thoughts on the contrast between how nowadays feature films are consumed, received, remembered, forgotten.

There’s a recurrent, iconic image from the first century of feature exhibition, in film noir-styled black-and-white, of a carbon arc beam of brightest light high above moviegoers’ heads, cigarette smoke coiled in dance, frozen in the frame, an image that contains both the evanescence of light and the corporeality of smoke.

The light that’s not the sky above but dream to come: the 1920s-crafted ceiling of the Music Box captures that, too, like a Greek or Balkan or any Mediterranean open-air theater under the stars: one dream scenario yoked to another.

Most movies I’ve seen projected in a cinema, whether remembered clearly or perhaps, as often, imperfectly—and there are a couple of decades of them—are usually less clear than memories of the room where they were shown, a weathered curtain; an odd doorway; the sense of the room with the lights down and the movie reflected over faces and figures and irregular surfaces. It’s a stern contrast with “content” “consumed” via streaming, the packet of pixels pushed along the internet from an AWS server leased by Netflix or Hulu or whomever.

The movie is a memory, but it’s a dream and a space in a place at a moment in time. The algorithm-driven thicket of menus on a streaming service?

Stories are stories and storytelling is storytelling, filmmakers who are recent beneficiaries of streaming service largess take pains to remind. But wasn’t it a time, when the presentation of a motion picture flourished with ephemera? Lurid movie posters. Earnest, bright lights under sad, tilting marquees. Stale but buttery popcorn. That one man with two Treasure Island sacks, laughing so generously but never at the right time. The click-clacketing of sprockets and gears from 16mm projectors, the mysterium of the mechanics, the inner-thingamajigs of projector systems. The lore and texture and certainly, scent, of celluloid emulsion. Concrete details, fragrant evocation. Physical sensations, all.

To recline, divine, into that bright dream, asleep within, between the every-ten-minute circle-punched reel change reminders in the upper left corner.

Not so much nostalgia for lost things as for the things that surround: The memories a matrix, like a real-life deluxe Criterion edition, but comprised of experiences with the viewing of that particular motion picture.

Are such sights necessarily site-specific? Are “movies” not movies without tangibility, without so much as a DVD case with diffident art and a small silver disk to slide into a tray? Did all these bits of scuff and touch and slide and whir enhance the experience? Or is that weave actually the experience entire?

A list I made of theaters and experiences in college film society days and nights in Chicago dollar houses and calendar houses became a chart and then a cork board, then two, and now an outline for a future narrative within narratives far longer than this pair of pages.

Some nest and nestle and brush up against each other, and others stand, stark and bold. A 70mm print of Terrence Malick’s golden-hour-borne “Days of Heaven” in Lincoln Park, dusk, July 30, 1989, presented by James Bond and Randolph Street Gallery. The amber apex of Nestor Almendros and Haskell Wexler’s cinematography as Chicago summer blue fell upon the Lake and night fell and the movie played and ended with the singular moment when Linda Manz muses, “Maybe she’d meet up with a character. I was hoping things would work out for her. She was a good friend of mine” as a lattice, a ladder of railway tracks extended upward to the vanishing point, the frame, the sky, Lake Michigan lakefront ever northward. Imagine seeing that movie opening day at the Brotman & Sherman Carnegie Theatre on Rush Street, no clue what would issue through a pristine 70mm print: an experience surely akin to seeing it at Ebertfest with Haskell Wexler presenting the movie many years later.

A story about a memory of a movie and a disaster that didn’t become a tragedy, and a Blu-ray: When I was small, in Kentucky, I was regularly dispatched to chaperone double-dates that my seventeen-year-old aunt and her best friend would go on, to the Corner Sundry or Blue’s Café, or the Broadview or the Webster Drive-in. I held a memory from childhood of a single image of a well-known comedy actress. I remember her climbing in or out of a bedroom window, a Jerry Lewis-wide comic expression on her face. That image rested in memory because on that night, a tornado rumbled through the nearby cornfields and suddenly upon the Webster, where the projected image dueled with the pressure growing in my ears and among those in the twenty or so other cars and the top of the concession stand blew and the not-so-tall screen arced lazily for only an instant and suddenly backwards onto the verge, the brilliant projector light splayed across 109 to the WW II cannon in front of the American Legion Post. All around, things tumbled and spun and then it was done.

A few weeks ago, I got the Blu-ray of that movie and image-scanned in search of the hard false memory from the intensity of being within the locomotive and atom bomb of the small but serious funnel cloud and my thumb slipped and the image paused and unholy-holy-shit, her face in that wide-eyed comic rictus of feigned surprise, flat and still and precisely as my nine-year-old retina had etched it. I stared a good long while, then put the disc back in its case.