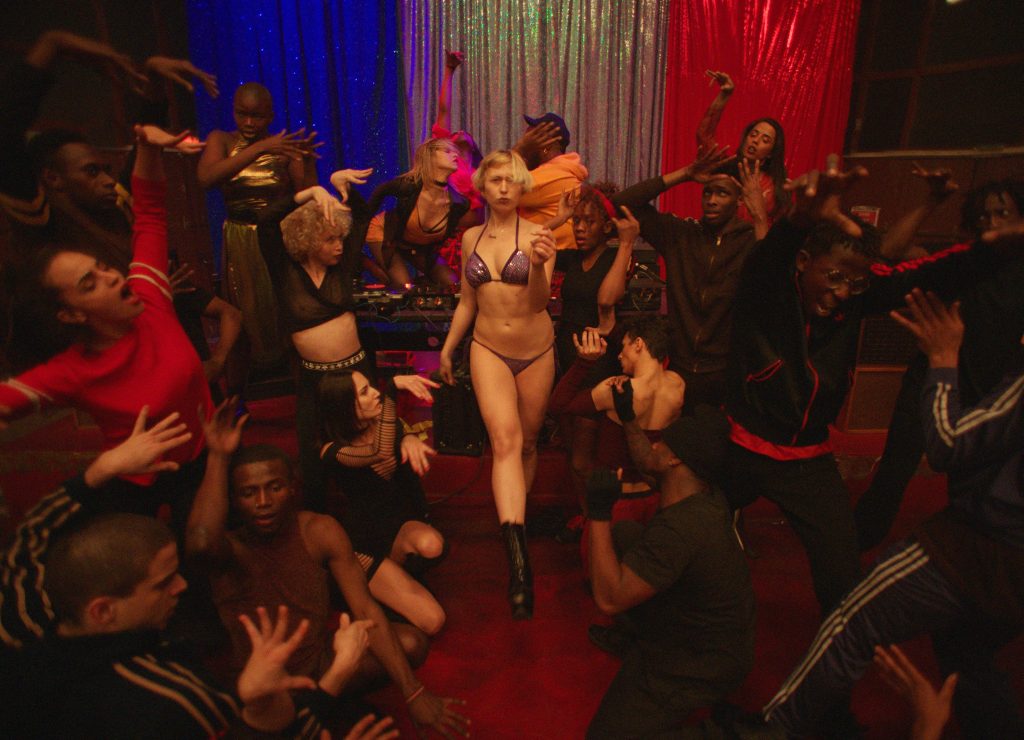 Gaspar Noé’s “Climax” is a rude, refined, gyroscopic, hurtling mash-up, as the Argentine-French filmmaker has put it, of heaven and hell, smack in “the heart of winter 1996” in a remote schoolhouse where a mass of young dancers celebrate before an American tour. But someone spikes the sangria (or is it merely mass hysteria?) and celebration spirals into suffering. “Heaven” includes a bravura dance number with a ravishing range of bodies in orchestrations of sensual motion and the camera brandishing its lavish mobility for moments on end; “Hell” is palpitating paranoia, mental and physical, of the sort Noé has trafficked before (as in 2009’s “Enter the Void”). Noé spoke on the phone the morning before the Chicago opening.

I love your heaven, but I fear your hell.
Yeah! Heaven is more fun!


The protagonist of your short “Carne” and its expansion as your debut feature “I Stand Alone” couldn’t stop violent thoughts in his head; you referred to his stream-of-consciousness as an “infernal radio.” I thought of that watching the moods of “Climax,” the ninety-plus minutes of it has this sweet, sustained, dark DJ track of songs, a heartbeat of music that many of us know as well. Without that beat, “Climax” could not be the same film, yet it stands alone as a mix.
Even finishing the movie, without the music playing, the film seems very much longer. For example, the opening scene in the snow, without music it feels two minutes longer! But once you put on a good track, the perception of time is reduced; I dunno why melodies change your perception of time. I think of songs that start, that are almost like sculpture, that start one way, then lead to sounds that are both sweet and dark, tracks that make you think of a better world than the one you perceive through your eyes.

It isn’t nostalgia per se, but we know the songs, we can’t but bring memories along. The movie is richer for this musical pulse.
When you hear again a track that you’ve listened to many times in your life, in many ways, you feel at home, especially if you like the track. When I hear “Born to Be Alive” [by Patrick Hernandez], I count on that song so much, it puts you already in a good mood. When I hear Aphex Twin or Daft Punk, I dance, those tracks release some kind of endorphin inside of the brain. At the end of the movie, when you leave with the experimental version of “Angie” by the Rolling Stones, it brings you back to memories. Girls from your secondary school, having an erection, that sort of thing. Some tracks can turn melancholic, also. Some tracks can excite you because you dance to them every time. I look for those songs, that my body remembers, because it excites my brain. 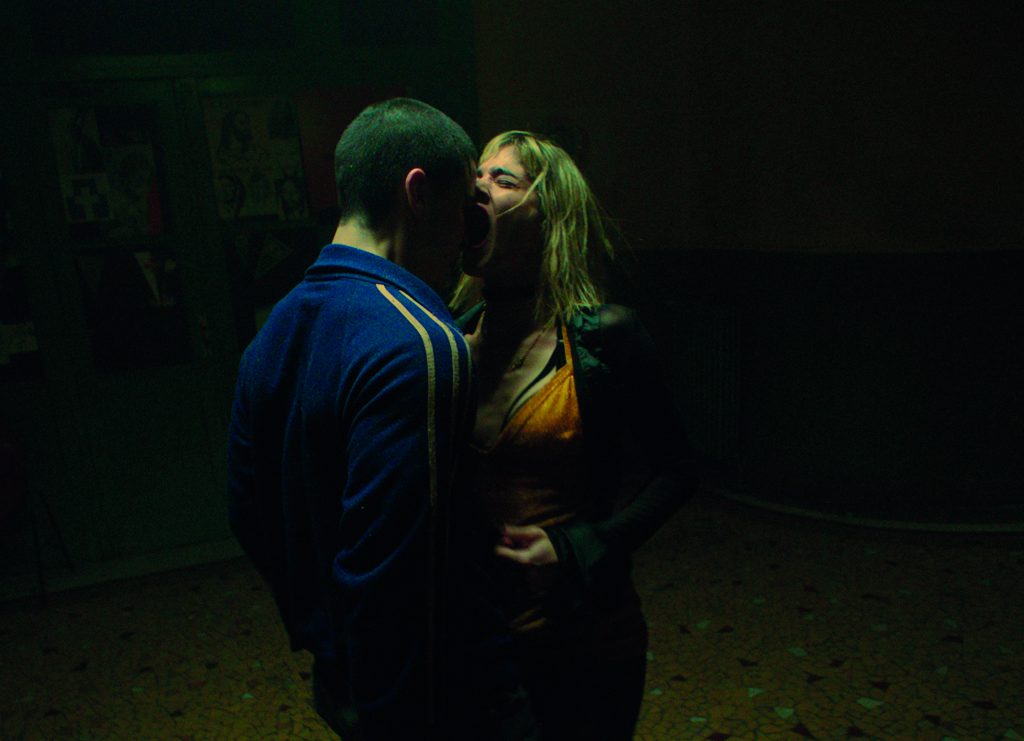 How much of the playlist did you have in mind shooting this very quick production, or were there happy discoveries in the edit?
I have a music supervisor who found things I didn’t know, like Giorgio Moroder’s “From Here To Eternity.” Or songs that I had forgot! There were these danceable tracks from the eighties that I did not know. Sixty percent of the tracks in the movie came from my own collection. Ones that I listen to often. There was another forty percent that were recommended.

How long is the bravura, early dance scene, the unbroken shot where the camera is ravished by the dancers?
The first long take is thirteen or fourteen minutes long, and in the second half of the movie [after the acid kicks in and the characters sprawl through the building], is forty-two minutes long! But most people when they say, “your long master shot,” they’re talking about that first shot, because the second one, they are so stressed in the second half of the movie, they don’t pay attention to whether there are any cuts! People only notice the first, shorter one, while this one is almost four times longer!

At that point, you abandon the formal character of the sequences that came before, with camera and cutting following rigorous patterns, a basic formalism. Now the camera moves freely, as hysterical as the twenty-two bodies onscreen. Apparent naturalism, the unmoored camera signifying that this is “naturalistic.”
When people first saw long takes that were four or ten minutes long, in movies from the fifties and sixties, like Orson Welles’ opening of “Touch of Evil,” people were impressed, oh, look at this! Now there are so many people making films that are even in a single long take, that no one is impressed anymore. The problem is, how to make it new again? There is a movie called “Victoria,” with many locations and actors and no cuts for two hours and twenty minutes of real time. What matters when I am not editing the film is that once you put the people in front of the camera, you can create a mood. If you do many takes, the start of the shot might be better and number seven and the last part at take number five, but I like instead creating a precious thing where you don’t cut it. The act of not cutting makes you sharper in focus, you are in a real tunnel, in real life, there are no edits, the only edit you perceive is when you go to sleep, you close your eyes. The language of cinema is so artificial in general, you know. Why would you cut, go to one face, then go to the other person, then back to another close-up. It is very far from human perception. While we are living? We never cut the camera. 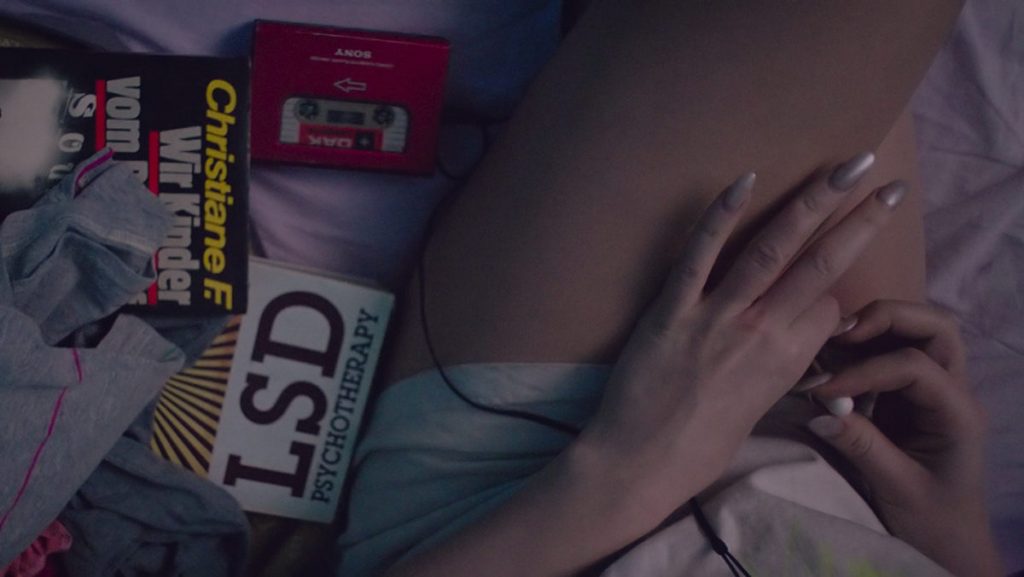 Both of the unbroken takes are sustained ecstasies: the dance is euphoric; the wanderings through the castle are nightmare the characters don’t wake from.
The second part, the camera is always at the level of the characters’ eyes. It is much more spectacular at the beginning of the movie when the choreography starts, and the camera on the crane is like an angel. But the point-of-view of the angel becomes human again at ground level, more like the reality you’re used to in real life.

So there are twenty-two dancers and one other character? Twenty-three total?
It’s a magic number! I know many people obsessed with the number twenty-three. When I was doing a list of characters, I made sure there were twenty-three. Twenty-two, they asked me? Twenty-four? No, no, twenty-three is good.

Why squash all your dancers in their VHS interviews between the stacks of books and VHS tapes? “Don’t look for influences, here they are”? [The wall includes a euthanasia manual, books on Fritz Lang and hippies and VHS cartons of Jean Eustache’s “La Maman et la Putain,” Andrzej Zulawski’s “Possession,” Pier Paolo Pasolini’s “Salò, or the 120 Days of Sodom,” Luis Buñuel’s “Un Chien Andalou,” Dario Argento’s “Suspiria,” Rainer Werner Fassbinder’s “Querelle,” and Kenneth Anger’s “The Inauguration of the Pleasure Dome.”]
There is a title in the end credits in French, “A ceux qui nous ont faits et qui ne sont plus pas,” which is, “To those who made us and who are no longer with us.” We are the creation of our parents and our grandparents, but we are also the creation of those books and movies we watch. So, yeah, instead of dedicating the movie to each one of them or putting up special thanks, I had this last-moment idea of putting all the books and VHS that in one way or another inspire me for “Climax,” but also in one way or another were forms of art that were much more common in the 1970s and 1980s.

Since you choose not to judge your characters, even when things go very wrong, when you also don’t protect them, I’ve always thought they share the motto, “Goodness had nothing to do with it.”
You have good and you have evil. That’s what I like about going to Japan: they don’t believe in good and evil, just the heart.