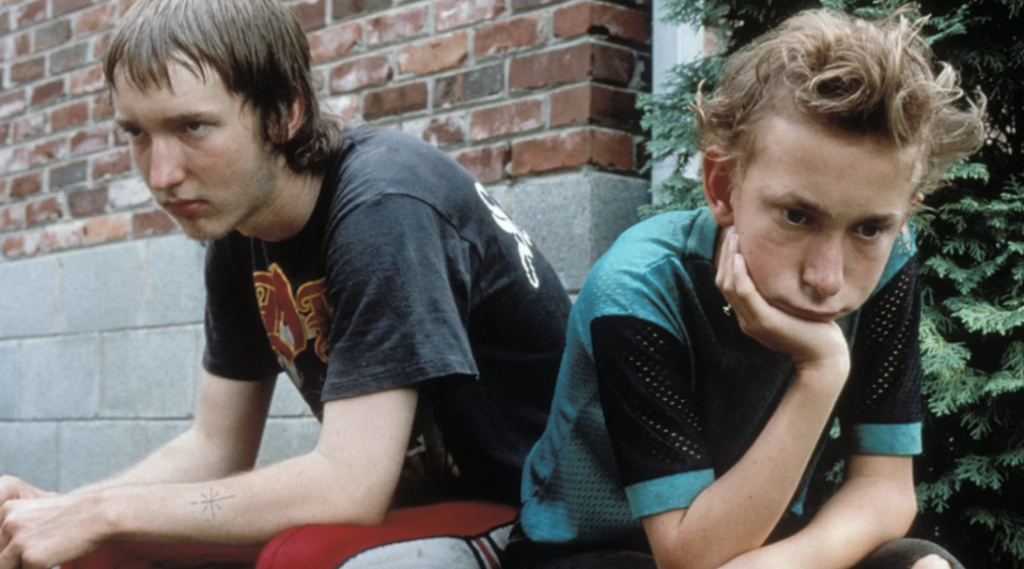 “All I want to see is pieces of fried bacon taped on walls, because most films just don’t do that.”

Harmony Korine has said a lot of things like that in a career of over twenty years. (He said that in 1999 to fast friend Werner Herzog at the Telluride Film Festival.) Plus, one of his most indelible inventions was in “Gummo,” his directorial debut, in which a kid savors a plate of spaghetti in the bathtub. I met Korine around the time that movie was released, and had the briefest of food moments, standing in a hotel hallway as he chased a journalist from the room rented for the day by “Fine Line Features: A Time Warner Company” by hailing a plate with a cold hamburger, and then the single-serving Heinz ketchup at the back of the door. As the older journalist scurried away, the twenty-three or -four or -five-year-old filmmaker greeted me with a grin: “I’m Harmony, I hear you’re from the South, too.”

“Gummo” is so Southern, I said. “Oh, it’s completely Southern, it’s totally, one-hundred percent Southern. I’m a Southern boy so how would it not be? I’d say ‘Gummo’ is an American film; it’s Southern, but it’s strange. But it’s a genre-fuck. I love the South, love it. I didn’t leave until I was eighteen. I had to move out to understand it. I couldn’t have made that film if I hadn’t left Tennessee for those four or five years.” (And with “Spring Breakers” and “The Beach Bum,” Miami is about as far South as you can go.)

He is not a “kid” anymore, hardly enfant, sometimes terrible. Now he is just-turned forty-six. A man who in middle age got his best reviews in 2017, for his offhanded yet precise performance as a middle-aged pepper-and-salt-bearded john in “The Girlfriend Experience.” (“I really want to touch you” comes off as needy but also keenly manipulative in Korine’s mouth.)

What is “Harmony Korine”?

A fierce and devoted lover of the Marx Brothers, not limited to on-camera Zeppo and off-camera Gummo.

A connoisseur and bravura practitioner of deceptive advertising.

A confectioner of faux-biography, sugared anew at each and every publicity opportunity.

A collector of bad notices: in New York magazine, David Denby called “Gummo” “Beyond redemption… An instructive artifact of the late twentieth century, an example of extreme disgust with the media that expresses itself in the media.”

A film inhaler (always studious, never a student). For instance, among all the things that could be culled from the neon delirium of “Spring Breakers,” Korine was working his way through his feelings for John Cassavetes’ crime film “Killing of a Chinese Bookie,” Britney Spears’ “Everytime” and the dramas of little-known English filmmaker Alan Clarke, with movies like “Christine” and “Elephant.”

A crack-up, a cut-up, a pastiche artist. A hodge-podger. A maker of media “combines,” to use the word the way Robert Rauschenberg did to describe some of his key visual experiments. A sprawl of lists of influence could be compiled, lists of lists, even. Books could be written, not all illustrated by Harmony. (One of the best is “Harmony Korine: Interviews,” edited by Eric Kohn, which I contributed to.)

An eye-opener to successive waves of young artists into the twenty-first century, art-school artists or not; hate or love, “Gummo” is a succession of WTF moments that say: you, too, can frag your fragmented, media-infused consciousness. (Even at the time of its release, Korine was fully invested in the elemental cliché of Andy Warhol’s lasting musical mash-up: “Velvet Underground put out their first album, and almost nobody bought it, but everyone who did started a band that sounded just like them.”)

A sum of other artists, but not their artistry: the form of his films remains a collation of parts, not a pre-fashioned fabric. Even the seductive surfaces of “Spring Breakers” gain power from fugue-like repetition, as if we were watching a video loop from a gallery installation, repeated, repeated.

A maker of lists.

A maker of lists, sparsely decorated, which have sold in galleries for substantial sums.

A filmmaker who understood what he was up to from the get-go. From our 1997 conversation: “The most subversive thing you can do with this kind of work, the most radical kind of work, is to place it in the most commercial venue. When Godard did ‘Breathless,’ the reason it became influential and changed the cinematic vernacular is that it came out in a commercial context. I only think things change when they’re put out to the masses, regardless if somebody dislikes them.”

Writer-director of “The Beach Bum,” his first feature since “Spring Breakers,” after other productions collapsed, which debuts at South by Southwest this month.

The Music Box will show Harmony Korine’s “Gummo,” “Julien Donkey-Boy,” “Mister Lonely,” “Trash Humpers” and “Spring Breakers” on 35mm, March 15-21, along with a DCP preview of “The Beach Bum.”