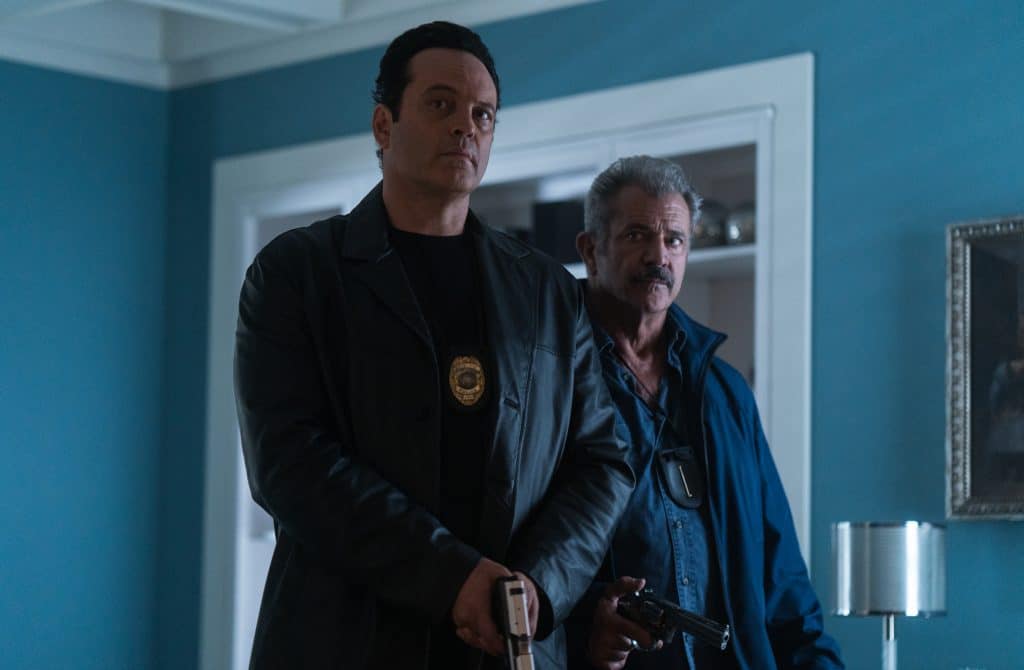 A video of an assault on a suspect committed by two police detectives—Mel Gibson, Vince Vaughn—leads to a six-week suspension and pushes the dead-broke, increasingly desperate duo into the criminal underworld. It’s a violent place, where words and guns alike have sudden impact. They cross lines, repeatedly.

Like his brutal but shapely earlier features—“Bone Tomahawk” (2015) and “Brawl in Cell Block 99” (2017)— writer-director S. Craig Zahler’s “Dragged Across Concrete” is a poised, assured demonstration of filmmaking craft and idiosyncratic storytelling of decidedly personal contours. His characters are not kindly or likable as they struggle to escape their waking nightmare—they’re vicious rogues. Zahler’s dramatization of the acts of bad men draws from the likes of Michael Mann’s “Heat” and even Sam Peckinpah’s “The Wild Bunch,” but there is architecture of plain ice to the methodical unraveling. And Zahler’s films, stuffed with brute action and bold words by characters that do detestable things, are not apolitical. The interpretation of said politics? Another matter.

Chris Vognar of the Dallas News profiled Texas-based Cinestate, lead producer of “Dragged Across Concrete” and other distinctive, eccentric films. Cinestate CEO Dallas Sonnier outlined a violent personal tragedy that set him on a new path. “I have developed a healthy obsession with dark cinema,” Sonnier told Vognar. “It takes a lot for me to experience feelings and emotions because of what I’ve been through. I am always attracted to extremes.” Does Cinestate or its filmmakers have an agenda? “If we have an agenda, it’s that when people say ‘You can’t do that,’ we like to do it,” he said.

Zahler’s director’s statement defines his interest in “making rich genre fiction that has multiple viewpoints, complex characters, scenes that breathe, and moments of drama, comedy and surprise.” He cites ensemble dramas like “Prince Of The City,” “Taxi Driver,” “Dog Day Afternoon” and “The Sweet Smell Of Success” as exemplars for “Dragged Across Concrete,” but also expresses devotion toward a rash of daddies, including “Hana Bi (Fireworks)” “The Cook, The Thief, His Wife, And Her Lover,” “The Killing,” “Heat,” “Bridge On The River Kwai,” “Nashville,” “Gun Crazy” and, yes, “The Wild Bunch.”

An older generation of cinephiles, who would have worked in the 1970s era of the stripe of rich, bravura low-budget action pictures, is torn. Two citations: While reformed film critic Dave Kehr writes that “it’s an excellent film,” one “far more humane than most contemporary action movies in that the deaths aren’t played for giggles but have actual impact and moral import. To me, something like ‘Deadpool’ is far more sickening.” But former MoMA film curator Laurence Kardish differs: “’Dragged through Concrete’ is [twice] the length of a Rohmer film but has [five times] the dialogue—hectoring, heavy, and worst of all, explicatory. I found it a bore except for the ugly thrills that come with the easy violence, just like Christchurch. Bam, you’re dead. I was not entertained.”

“Dragged Across Concrete” is at Arclight Chicago and on demand.