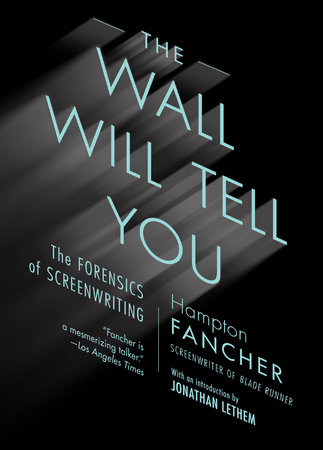 Hampton Fancher’s name appears on but a fistful of produced screenplays—including “Blade Runner,” “The Minus Man,” “Blade Runner 2049”— but his legendary life is rich, captured in part in “Escapes” (2017), Michael Almereyda’s captivating experimental interview documentary. Fancher, garrulous, greedy for experience, is, among so many things, a flamenco dancer-turned-actor-turned-screenwriter, an all-round beast of curiosity.

I first met Fancher when he was a hale sixty-one years old, and had made his directorial debut with “Minus Man.” Here’s a sample of that exchange before whiffing his carborundum-strength dream prose and scheme advice. “Scripts I’ve written? Lots of ’em. I’m not prolific. There are some I own, but studios own most of them. My most promising things, I can’t get. Too much money has been spent on them already. Warner Bros. has a pretty interesting story of mine, but they have a policy of not putting a script into turnaround. You can’t get those things away.”

Making your directorial debut at Sundance at the age of sixty-one is unusual enough, I observed. But it sounds like you’ve had a good life, nothing to regret. “I know what it must look like out there! ‘What have you been doing all this time?’ There’s a seventeenth-century writer who said ‘They who would be young when they are old must be old when they are young.’ I was pretending to be old all my life until I got to be about thirty. I don’t feel old exactly. I know I have only a few years left, but the challenges and the rewards are still the same. I was probably a fanatic when I made my first short at twenty, an asshole probably. There is something that comes with age about humility and not being threatened by being wrong. When people would tell me something was wrong, ‘Fuck you! Get out of here!’ So who would want to tell me? How could I learn anything? That’s a good part of age. The confidence that allows one to make mistakes.”

Drawing from courses he taught at NYU and Columbia, Fancher’s “The Wall Will Tell You: The Forensics of Screenwriting” (Melville House, 80 pages, $15) is a punchy pamphlet introduced by Jonathan Lethem and packed with incantatory aphorisms about screenwriting, process and result, that slip-slide from poetry to passion, from carpentry to fever dream. “I’ve learned a lot from Hampton over the years,” Lethem writes, “and most of all when what he had to teach me came in the form of a baffled admission that he had no fucking idea what to do from one moment to the next except live, write, exist and love. ”

A pungent parallel to Robert Bresson’s spare “Notes on the Cinematographer” (out-of-print but readily available online), fumes of Fancher passion rise like cool, perfumed wine. Translated Bresson includes “Make visible what, without you, might perhaps never have been seen,” and “The most ordinary word, when put into place, suddenly acquires brilliance. That is the brilliance with which your images must shine.”

Fancher’s words read instead like those of a man who acted in “Gunsmoke” and “Bonanza” and beat down the 1960s and tore up the 1970s and kept it going into a new century and was Jim Morrison’s next-door neighbor in the Hollywood Hills once upon a tale. They’re not koans, nor “Oblique Strategies” in the style of Brian Eno and Peter Schmidt, but they’re worthy rabbit punches of experience, both practical and philosophical: “Music, painting, acting, architecture, fucking pottery, even screenplay writing; in all art, an element of surprise is essential.”

“Above all, don’t fucking digress into anything intellectual. It’s action you want. It’s a pinprick, even. Keep it simple, keep it felt. Language is secondary. But it also isn’t—don’t be stupid, write sharp.”

“What you are trying to learn cannot be taught. What you learn is by teaching yourselves through trying. You have to become better than your teachers or your teachers are shit.”

And, yes, of course, “A screenplay is the bones of a poem and the poem is a movie and the movie is a dream.” (Ray Pride)