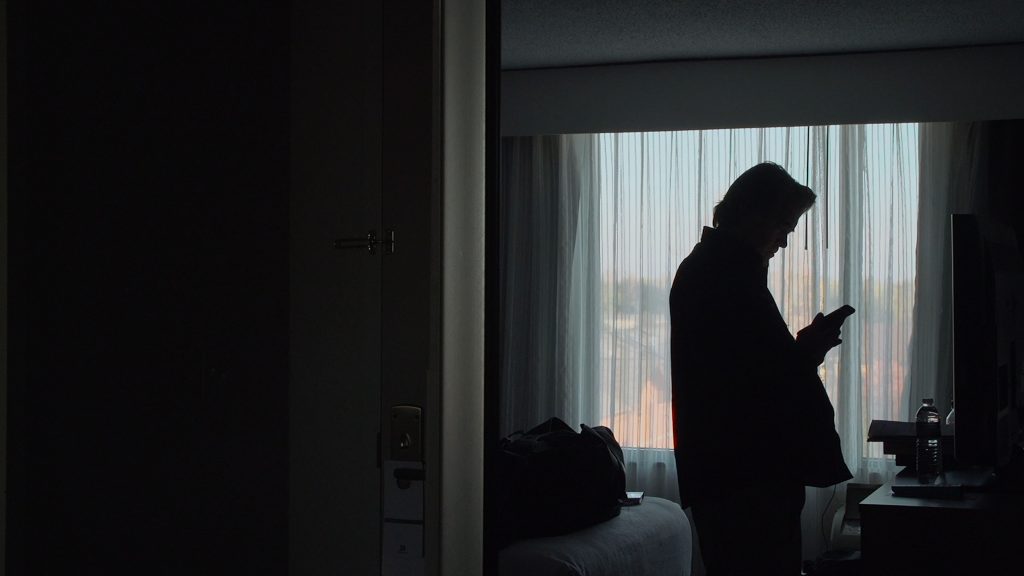 Alison Klayman’s “The Brink,” an avatar of cinema-vérité observation, arrives in a hush and escalates with precision. Klayman records political consultant and purported intellectual powerhouse Stephen K. “Steve” Bannon after his dismissal from the arms of Trump power, and the rich result, captured by a filmmaker-cinematographer-sound recordist on their own, all on their own, is edited to a fierce ninety-minute form from day-after-day of close observation of a year in a life of wheeling and huffing and dealing and puffing.

“Facts, just factoids, right now,” Bannon demands in a darkened, shabby room, cracking open another Red Bull, tousling the hair that had once stranded atop a young, somewhat handsome face. He’s trying to lose thirty-five pounds, he says. After leaving the Trump-o-sphere, he says he read articles, looked into the comment section, where, he says, he was called “this gross-looking, Jabba the Hutt drunk.” He looked “scary,” he agrees.

In “The Brink,” Bannon is sometimes a sea lion in autumn; sometimes a protean smudge. Klayman is a good in-betweener from even the first shots, capturing images of subjects at rest, all potential, ready to burst, Bannon bustling out the door in his all-forgiving barn jacket, thumbing a couple of phones into the autumn afternoon. Klayman captures Bannon’s jocularity, the middle-aged humor of deferring in paid picture sessions to women as “roses” and himself and other men as “thorns,” calling a protestor his ex-wife, calling after her, “You’re a good girl, you got the right for free speech—outside.” Lots of joshing—man-joshing, put-you-in-your-place joshing. Even when he is alongside detestable men like Piers Morgan and Erik Prince (billionaire founder of Blackwater and brother to Education Secretary Betsy DeVos) and Nigel Farage, he is jocular while the camera captures the elemental smugness of the other men.

“It’s a global revolt,” Bannon says to Farage, who rocks and agrees. “It’s a zeit-geeest,” he says, mispronouncing the word. For an educated man, he slurs words and mispronounces them, more like a self-made autodidact than a Harvard Business School attendee. When Farage is gone, Bannon cuts him: “Nigel’s got the same problem, all the British guys, they just want to fuck off all the time” instead of do the work of fomenting “The Movement.” All the clockwork feels banal and wearying, but then instants, moments, erupt, such as where Bannon is in European hotel rooms, plotting political dissent with ranks of emerging European rightists who somehow forget there is a camera, a filmmaker, at the end of the table.

“The Brink” is a distinctive and great film, a collaboration between producer and director that sings. Klayman “shot the entire film alone, save for a few scenes of B-roll,” relates producer Marie Therese Guirgis, whose past work with Bannon at film distributor Wellspring inspired this final-cut portrait. “She did sound, she carried her equipment everywhere. She was a one-woman crew for a year. She put herself in literal harm’s way, traveling with a person against whom there were legitimate active assassination threats at times during our filming. Alison courageously embedded herself with people whose ideology and actions are not just abhorrent to her but also deeply psychologically demoralizing.”

Klayman’s camera also follows behind Bannon—angel on the shoulder, devil on the shoulder?—as he’s spirited through corridors and hotel kitchens into the small-town lights to speak of “economic nationalism” and support candidates like Alabama’s disgraced Roy Moore. He also peddles a brassy hour-long video, “Trump @War,” which he shows to a pair of Politico reporters, who challenge its intent. “C’mon, that would mean like it’s propaganda.” Bannon subtly puts quotes around his next words: “What would Leni Riefenstahl do, how would she cut, how should… how would, how would Leni cut that scene…” He drifts off. Later, he says, “It’s not a persuasion film, it’s a piece of propaganda, I consider it propaganda,” and grins slyly.

One of the most chilling encounters is with a Bannon colleague, former Goldman Sachs president John Thornton, who assures him, “I’d like to see you increasingly seen as the intellectual horsepower leading the movement.” Thornton shares strategy in a post-event Toronto green room to Bannon on capturing “the Sanders people, the blacks, the Hispanics.” At this moment, Klayman’s Bannon is practically a Dashiell Hammett character, embraced by the quieter, darker forces of a frontier town.

Klayman spends election night 2018 with Bannon. The passage is quick and sure: he does not have a good night in yet another darkened small room. A coda is literally at the brink of what will become of Bannon and his proclaimed life’s work of The Movement: in motion, in plane, car and through the streets of a European city, grafting old definitions onto words like “populism.” He is tired. Daylight, even Mediterranean glow, does not flatter the sixty-five-year-old Bannon. 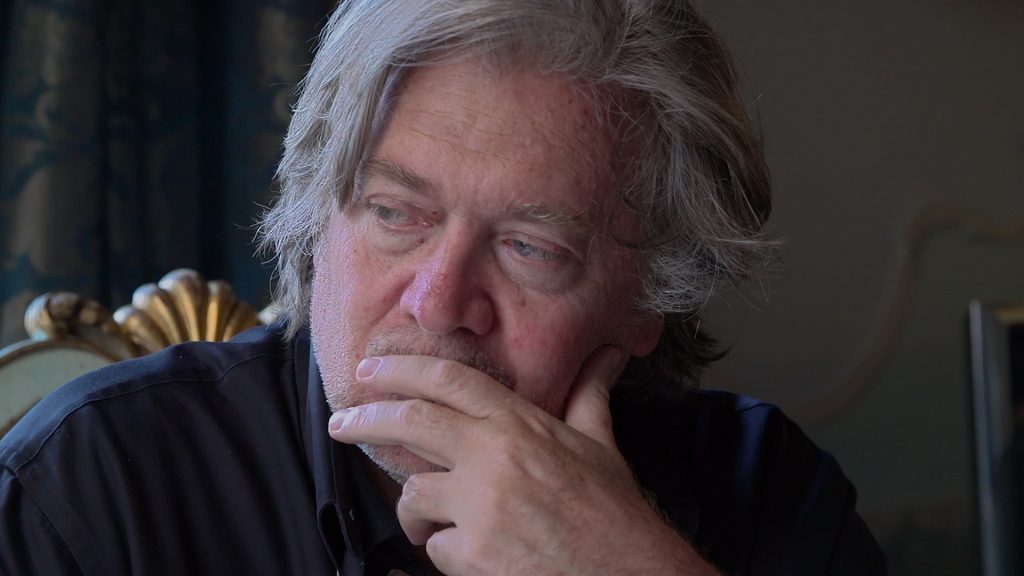 Near the opening, Bannon, eyes agleam, relates a story he had been told about the difference between the Dachau and Birkenau death camps: Dachau had been converted from barracks stock; Birkenau was “precision-engineer[ed] to the Nth degree.” He marvels at the “German industrial design,” holding up a forefinger for emphasis as he explains these campuses, these machines for death, built by “Humans that are not devils, right, humans that are just humans.” The enthusiasm jars, but the end of the telling runs over plainly beautiful shots of Washington by night underneath Bannon’s telling. The camera skims D. C., the Capitol, the White House… “Humans that are just humans.”

Klayman returns to the banal brass of that visual imagery in the penultimate scene, before the spent Bannon soldiers on. It’s a montage, a worthy parallel to the straightforward yet iconic imagery that suffuses Alan Pakula and Gordon Willis’ “All The President’s Men.” Klayman arrays low aerial shots of the beauty of lit-monument, taillight-and-headlight jam-in-rain Washington D.C., and atop it, that election night, voices. Voices rise: rise in triumph. Women’s voices. Forceful voices above the night shimmer, the townie glitter. These are voices of hope, raised high and bright, they are new voices, the new voices of D. C., stitched together as chorus, not as identified names, but they are now identifiable voices. They are the victory speeches of freshly elected members of congress, elected to change, to transform, not only this night-dark touristic landscape we see, but the world at large. In Klayman’s constellation, they are chorus. The moment is wholly cinematic, restrained, pungent, heartfelt, tear-tugging. I’m crying again. “The Brink” is essential. 90m. (Ray Pride)