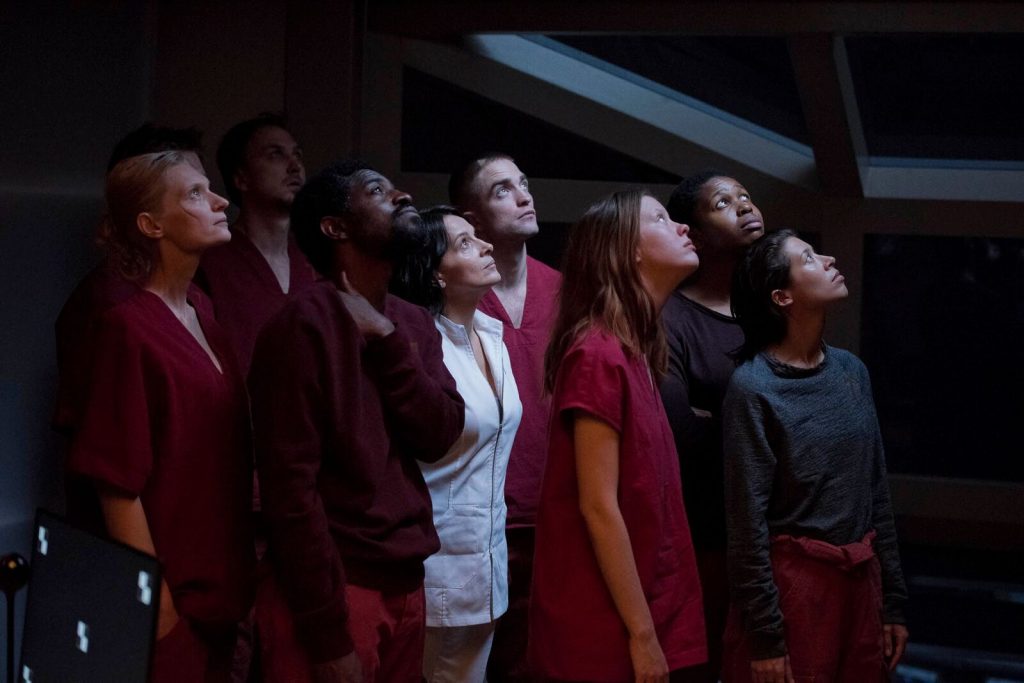 Claire Denis’ “High Life” is measured out in parcels of time: past, present, later, before. (And maybe even a little bit of “never.”) A crew of men and women convicts has been rocketed into space, toward the certain death of a black hole and its gravitational crush to conduct experiments rather than die on earth. Their small ship, “7,” is designed like a prison crafted from freight containers with compartments segmented off of a harsh corridor. Juliette Binoche, as “Dr. Dibs,” is clandestinely conducting her own experiments with human life, violating her charges to create life high in space while the human body is bombarded with the menacing effects of space travel, including radiation. We meet Monte (Robert Pattinson) and a baby girl named Willow, and then the events among the crew that led to these last two humans alive.

Before the chronology comes clear, we see Monte tending to the child, wondrously resistant to his attentions. Monte checks machines that recycle the waste of the crew. “Don’t drink your own piss, and don’t eat your own shit,” Pattinson patters, “That’s what we call a taboo.” The child squeals and he offers a further chant of “tab-boo, tab-boo” in response. (Tests of taboos ensue in many, many ways.)

“High Life” is tactile, tensile, terrifying: knowing of fluids, fearless about intimacy. The ominous breadth of the story is constructed through immersion: its prison-scaled spaceship is like a mind buzzing with the great mortal fears. The prisoner-astronauts are medicated, and find release in a room-sized device they dub “the Fuckbox.” “High Life” begins to roar after a scene where Dr. Dibs releases her demons within and Denis shows us only Binoche’s bare back, switched with Dibs’ improbably long hair. Stuart A. Staples’ score and sound design growl to her motions, captured in a painterly mass of murk and sinew, as if the Saturn of Goya were consuming himself instead of his son. “All of her strength is in her back,” Denis says, “which I filmed like an odalisque, with the beautiful lines of the hips and rear.” This demonic investiture is the most explicit passage of the movie. In the press kit by European co-producer Wild Bunch, Denis said “For me, the most erotic scene in the film is when a young inmate masturbates while staring at Juliette drying her hair in front of a ventilation shaft. ‘High Life’ speaks only of desire and of fluids.” 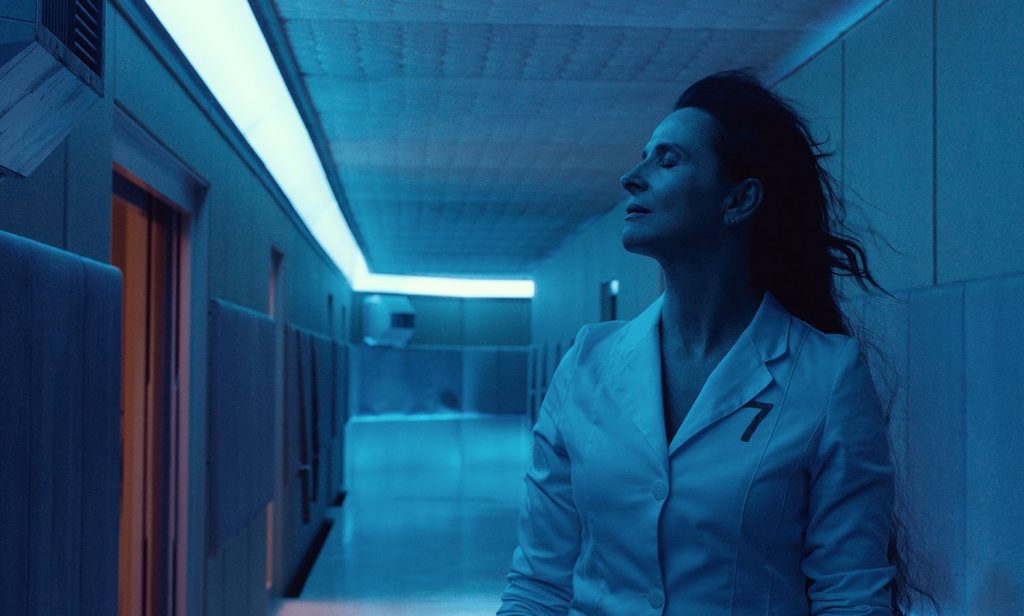 The seventy-three-year-old French master filmmaker and I spoke on a brilliant Chicago midday the day before the Event Horizon Telescope released the constructed image of a black hole. (Denis’ black hole looks very much the same, augmented by a transformation designed by the Icelandic artist Olafur Eliasson.) [Possible spoilers.]

Denis considers “High Life” a work of realism. “It is very much realism!” she chided a questioner the night before in front of a packed house of students at Doc Films. “You have heard of jail? It is violent, and it is also frustrating. You have this big smile as if you are discovering the world, yes? You are a big boy now, you should know about life!”

Making her films, she said, was “not tricky, it’s work, it’s feelings,” which is reflected in showing “how fragile and full of emotions we are. This intimacy. It is why their world is still a jail, and there is violence because the intimacy is forced.” Of the film’s restrained camerawork, Denis added, “A camera movement doesn’t need to be beautiful, it needs to be necessary, which is where you get the feeling.”

The astronauts aren’t alienated, she continued, with their “vague hope something might happen,” they are just “separate from Earth, yes. Alienation… It’s a word I’m afraid of. It’s a concept. I don’t work with conceits. I would never think I am doing a film ‘about alienation,’ I would have nothing to say then. Concepts are difficult to me.”

Your films are concrete; objects in characters’ lives are very defined, yet within the editing, the narrative, they hold mystery or fragrance. And the films leave a different tang seen at different times. With “High Life,” it took me about three days, what have I taken from this film, what has it given? And then it came down to, and even more so seeing it a second time last night, it came down to the fluids.
I took it from Kubrick! You know, the beginning of “Dr. Strangelove”? The crazy general says, “Ohhhh, preserve your fluids!”

“Deny them your essence, Mandrake!”
I kept that in mind all the time, you know!

The human body is sixty percent water and the intimacy here seems incredibly tied up in human fluids. I tried to make a comprehensive list, the piss and shit and blood and cum and milk and the white fluid around the “Fuckbox” like at a sex shop and IV bags and injections and the mist in the garden—
And this is a soapy product to clean it! And the milk from the breast, yes, sure, yeah… And tears. And tears. The little baby girl Willow, she’s doing this [with her hand], and she has a real tear. That’s the moment where there is tears. 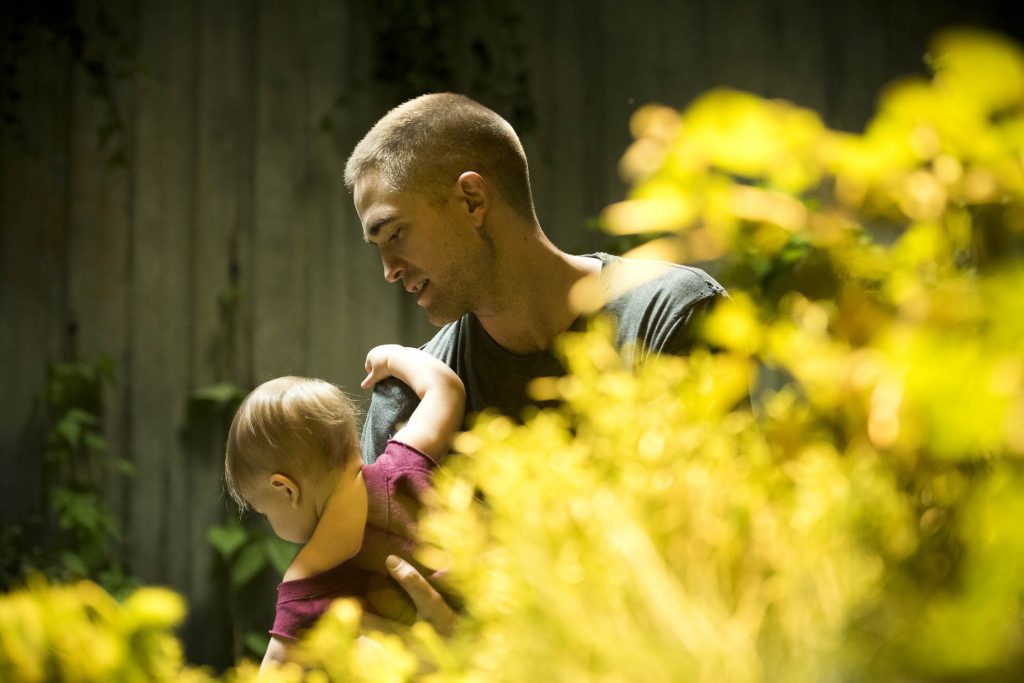 You have bodies meeting, there’s a dance in your films, choreography of meeting. The proximity of bodies, the yearning for intimacy. “High Life” felt withholding at first, but the dance comes closer, it’s in the blood and then the violence, and the violations.
To explain why it’s difficult for me, it’s probably how I felt cinema was so great when I first saw films, you know? I immediately realized the kind of emotion I had, which was so physical, how can I… And maybe also, as I was getting older, I realized it never changed, it’s still there. The other day, I was asked by someone, what is a film I remember immediately, just without thinking? And I said, “Suddenly, Last Summer,” the Tennessee Williams play adapted for cinema by Mankiewicz. I was underage when I saw the film, I lied on my age and I remember… I was not sure I understood what the character, Elizabeth Taylor, was doing in the sea with this transparent swimming costume. And this dude, those little Mexican boys were watching her, but the fact that he is cruising, Montgomery Clift is using her as bait, it was not clear in my mind! But I still remember this like only cinema can do that without explaining. Without explaining.

Mystery coming from building blocks of physical sensation arranged in a hypnotic way.
Yeah. You know, when we were shooting in Köln, the studio was in Köln for a French-German co-production, and I loved the studios. They were old studios, small but very inspiring. They have been demolished since. I was lucky enough to realize that the agency, space agency for cosmonauts, training space, was there in Köln! So we went with the actors there and there were many machines we could try, but there was also a twenty-four-hour image from the Station, and it was explained to me why they were sleeping like that, standing, bleh-bleh-bleh. But there was this guy, always kneeling, always his back, never his face. I said, and him, what is he doing, always kneeling? And he said, oh he’s the commandant, he’s the boss and he’s the only one who knows how to repair the toilet and it’s always, the shit is always blocking the machinery! And I was there in that space program thing, you know, those people… can you imagine the beauty of it…

The panorama of the cosmos—
Yes, and the guy is fixing the toilet day-by-day. Oh c’mon, I loved that! 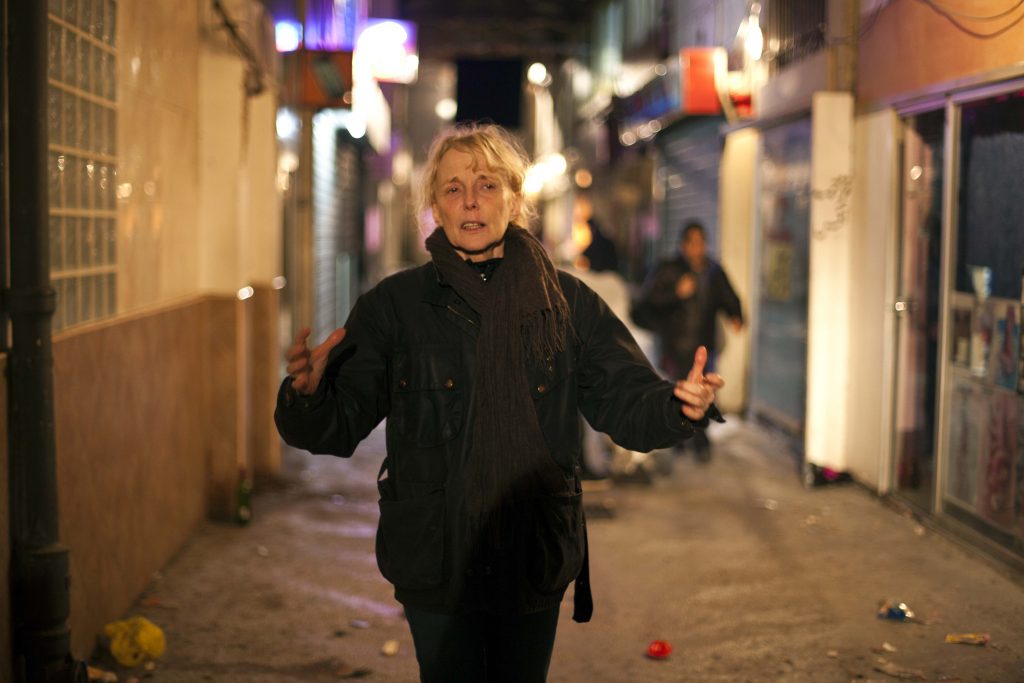 The film took a decade from idea to the screen, and I like how you’ve said that the expert on black holes was the person who finally showed you how to make the story work, the scientific accuracy also gave you truth for the story.
Yes. It’s very difficult to understand space and time. The singularity of the black hole, if someone would touch it, it would be that moment where at the end of the film where space and time dissolve: no more. Maybe a sort of eternity. But it’s so hard to understand that this is not a dream, this is astrophysics, you know? The black hole thing is so weeeeeeirrrd and great. Today I was reading, having breakfast, the New York Times, in the hotel. And there are two articles. One is a scientist from Boston explaining that there is an image of a black hole [about to be released] and in the science part of the newspaper was an explanation of the singularity. Ten years ago, black holes were maybe… Nobody was so sure about them. Now, it’s… the proof is made that they do exist! That this energy is probably… this strong… masterpiece. I don’t know how to express the thing, but when I went to class to listen to Aurélien [French physicist-philosopher Aurélien Barrau, credited as “Cosmic Companion”], because he’s a great teacher, I thought I was understanding… maybe it was not true, but I was understanding a little bit, and it’s so… beautiful. I told him, to be an astrophysician, it, it’s even better than to be a mathematician, because mathematics, everything stays abstract. In astrophysique, you work with mathematics and then suddenly, it exists, it’s materialized! How amazing.

Finally, your characters come to the edge and face it.
Yeah.

Like Jean-Pierre Melville’s novelist character says at the airport in Godard’s “Breathless” that his greatest ambition is to become immortal, then die?
Yeah, exactly, exactly. Reaching this thing called singularity is so great, it means, it means many things, but it means also that Einstein was right! His formula is still working. Now! You know? Even with quantum mathematics… I think a mind could foresee something and this something is relativity. It’s weird!

And then to make that part of the mechanism of the movie…
Learning from them makes everything even more fantastique, you know?

“High Life” is at the Music Box, River East and Century Evanston.