“I can’t point to any movie, recent or otherwise,” writer-director Alex Ross Perry has noted of his intently, intensely ambitious sixth feature, “that combines the two things I wanted to explore in ‘Her Smell’: lowbrow popular music and highbrow theatrical productions going back to Shakespeare’s five-act tragedies.” In 2015, Perry reports, he watched a raft of plays in a rash of theatergoing in New York City, including productions of “Hamlet” and “The Merchant of Venice,” and lots of Broadway musicals, particularly “Les Misérables,” soaking instead of eking. 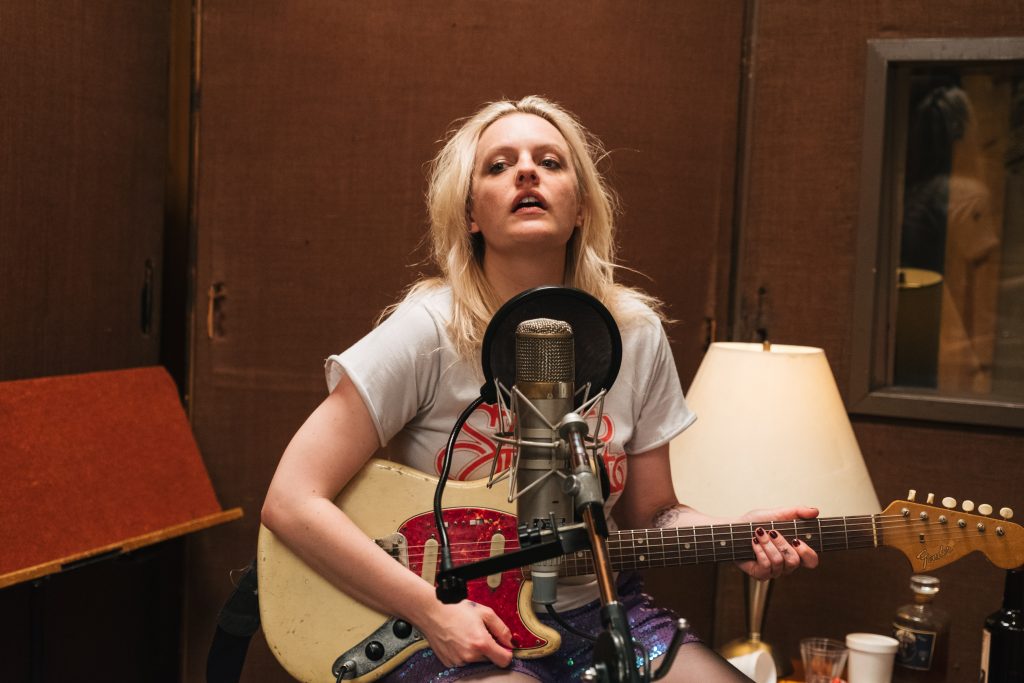 That immersion led to “Her Smell,” with a volcanic Elisabeth Moss as a nineties punk-rock star who could fill large venues once upon a century with her all-female group “Something She.” Excesses are succeeded by a modicum of calm as she attempts to gain control of her life after a careening career. Moss’ Becky Something contains multitudes. Courtney Love. Axl Rose. The ensemble of L7. Gena Rowlands’ long-asimmer crackerjack alacrity. She’s a phantom of the opera. Incandescent, incendiary. Energy, tantrum and tumult.

In Danny Boyle’s “Steve Jobs,” Aaron Sorkin reduced Jobs’ life to three pivotal scenes in two hours; Perry’s fictional musician gets five real-time tableaux across 135 minutes. (Maybe there’s even a hint of Paul Schrader’s unproduced screenplay, “Eight Scenes From the LIfe of Hank Williams.”)  The New Yorker’s Emily Nussbaum liked Moss on Twitter: “Wild, punishing, humane movie with a truly mind-blowing performance by Elisabeth Moss. The only time I’ve ever seen an actor play a rock star and actually exude rock star charisma.” Part of that affect is the verbal dexterity and headlong energy of dialogue that nears monologue: words, words, words, as narcotic as any beat. Sounds, not just songs, pour from her: popping off and pain and poetry. At Vulture, Perry cited forebears Sorkin, David Mamet and Matt Weiner, “who are such incredible talents, they’re always writing about people who have it together. So by using that style of writing—which I’m hugely influenced by—but doing it with someone who’s just off the rails, writing it in that kind of theatrical rhythm … it’s a combination that I don’t really see that often. That’s what was exciting about the writing—doing a kind of Sorkin idea, but not about the smartest guy in the room.”

The vigor of cinematographer Sean Price Williams’ widescreen compositions, their intent curiosity, matches the swirl of lashing, livid acting across a career, careening. A scene that plays out in a recording studio is lavish with multi-plane reflections, creating individual spaces, or fiefdoms, for each character as what seemed the worst worsens, and the slow glide of focal lengths lends an Altman-like vibe more sinister than silken to the passage. It is but one temper in Perry’s cathartic, foul humours that rise far above mere blood, yellow bile, black bile melancholy and phlegm.

Further Perry verbiage in the wild includes a vision of low-budget movie distribution at apocalypse, outlined in a signed piece at Talkhouse. “We were ruthlessly efficient… The film did not sell for $13 million but I remain optimistic that its distribution and release in no way runs the risk of being relegated to esoteric,” Perry writes. “The next ten filmmakers who have a comparable film at a comparable budget level, I don’t think I made it any easier for you to get your script produced. We are seemingly stuck in a situation befitting classic American ideals where the rich benefit or profit the most, the poor (relatively or extremely inexpensive movies) can no longer survive or justifiably exist, and the middle class (movies like ‘Her Smell’ or ‘First Reformed’) are threatened with extinction due to being potentially unsustainable. And if we are not creating a sustainable means of production and also a marketplace for those coming up behind, then I must worry about the future as much as I fret about the present.” With Cara Delevingne, Agyness Deyn, Dan Stevens, Eric Stoltz, Dylan Gelula, Virginia Madsen. 135m. Widescreen. (Ray Pride)