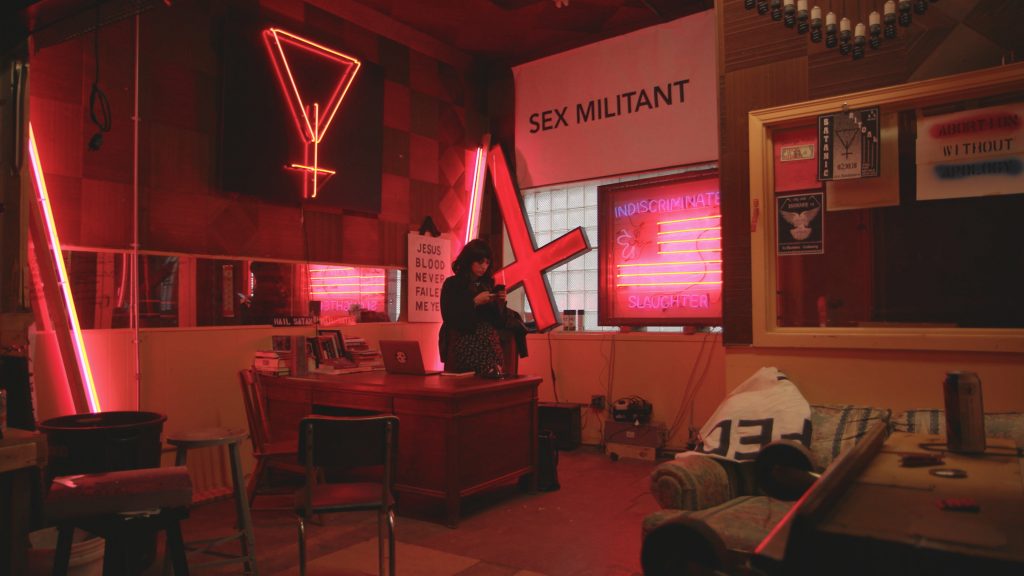 The rollicking comedic politi-doc, “Hail Satan?” from Penny Lane (“Nuts!”; “Our Nixon”) shadows the Satanic Temple (which was recognized in April by the IRS as a religion) during public actions that militate for religious freedom for all and essential First Amendment rights, and mocks reactionary churls such as the Westboro Baptist Church and former Florida Governor Rick Scott.


“Initially, it seemed like brilliant performance art that was designed to promote religious pluralism in America, which is a topic that I’ve always cared about,” Lane says in the film’s press kit. But as she delved into the work, she had a realization that mirrors what her documentary conveys so well: “I had it totally wrong. I assumed that the Satanic Temple members were not in fact Satanists, but were just pretending to be in order to make a political point. The truth was Satanism didn’t mean what I thought it meant.” That complexity arrives with a bounty of humor: the political activities Lane and her crew witnessed are hilarious and revelatory about traditional, core American values.

Most of their activities are spirited, principled stands for religious plurality and against Christianity being held high and sacrosanct above all other activities in the public sphere. The Church’s activities are less about occultism than the preservation of individuality against oppression of any form. Their ripe grassroots activism and media manipulation makes Goth pranksterism one with the great absurdist activists, not limited to the Church of the SubGenius and the Yes Men. Penny Lane’s light-hearted, levelheaded look inspires on multiple levels. 95m. (Ray Pride)

“Hail Satan?” opens Friday, May 3 at the Music Box.