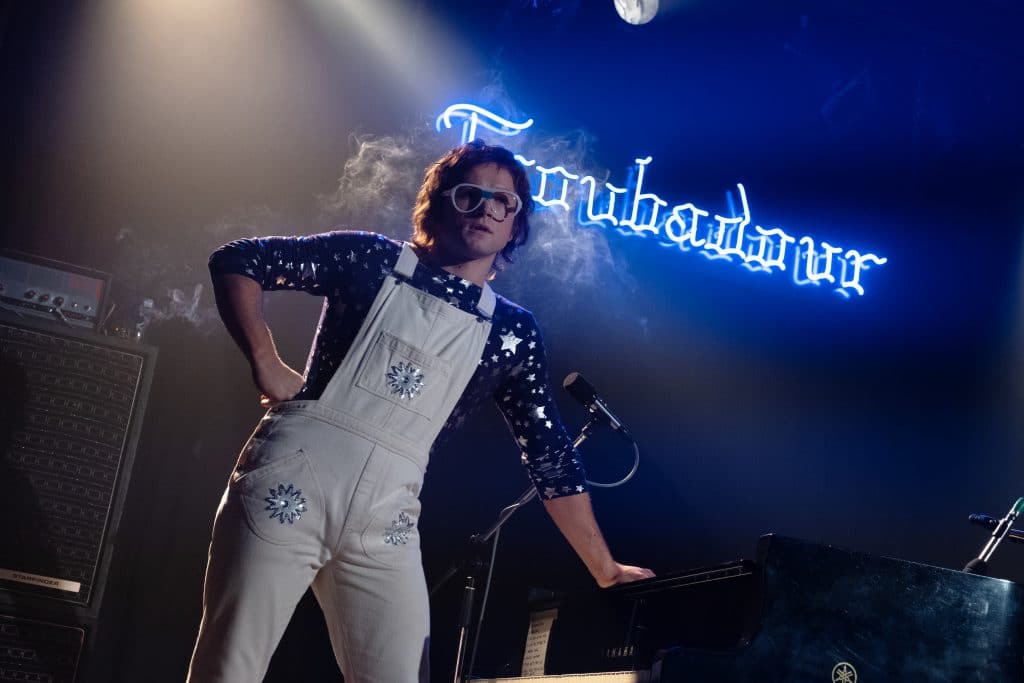 “Rocketman,” the biopic-jukebox musical strung upon the outpouring of songs written by Elton John and Bernie Taupin, is saved from its chock-a-block narrative impatience by the pure puppy-ness of Taron Egerton’s performance as Reg Dwight grown big and awful, rocketing toward his present twenty-eight years of sobriety. Camp is indicated more than embodied: the phantasm of Elton John’s feelings, both sad and flying high, plays more as a deracinated version of a Baz Luhrmann canvas like “Moulin Rouge” than the Ken Russell bacchanal that would have incinerated the screen. (The script is by Lee Hall, who collaborated with John on the stage musical adaptation of his highly political “Billy Elliot” screenplay.)

Taking the form of full-on musical—there are club and stage performances but most songs are sung through fantasias and choreographed numbers that sometimes have only the most superficial relation to the song’s lyrics—Dexter Fletcher’s fourth feature (if you don’t count the finishing-up of $903 million-grossing “Bohemian Rhapsody” after the firing of Bryan Singer) is a pleasing pop-song medley, a simulacrum of good things from far and wide, not limited to rapid-fire resemblances to “Grease,” “Absolute Beginners,” “Distant Voices, Still Lives” and “Tommy.” (The narrative frame and time fractures offer a tincture of “All that Jazz.”) Fletcher is no Ken Russell, in terms of outrage or hallucinatory visual expressiveness, but he is keen in his own extravagant fashion: there are brushstrokes, strong for a studio release, of John’s sexuality and unapologetic ingestion of booze and narcotics and bad manners. (Yes, there are costume changes.)

Fletcher, who calls the movie “a riotous joyride,“ began as a child actor as “Baby Face” in Alan Parker’s “Bugsy Malone” and later appeared in “Caravaggio” by Derek Jarman, David Lynch’s “Elephant Man” and Guy Ritchie’s “Lock, Stock and Two Smoking Barrels.” The range of his experience suggests a source of his indefatigable eagerness to please and to deliver, right, a riotous redemption parable, right down to the fiction-reality title card montage at the very end. With the very good Jamie Bell as Taupin, Richard Madden, Gemma Jones, Bryce Dallas Howard, glimpses of sad, wan moons and a bittersweet apparition of the Twin Towers by night on a distant horizon. 121m. (Ray Pride)