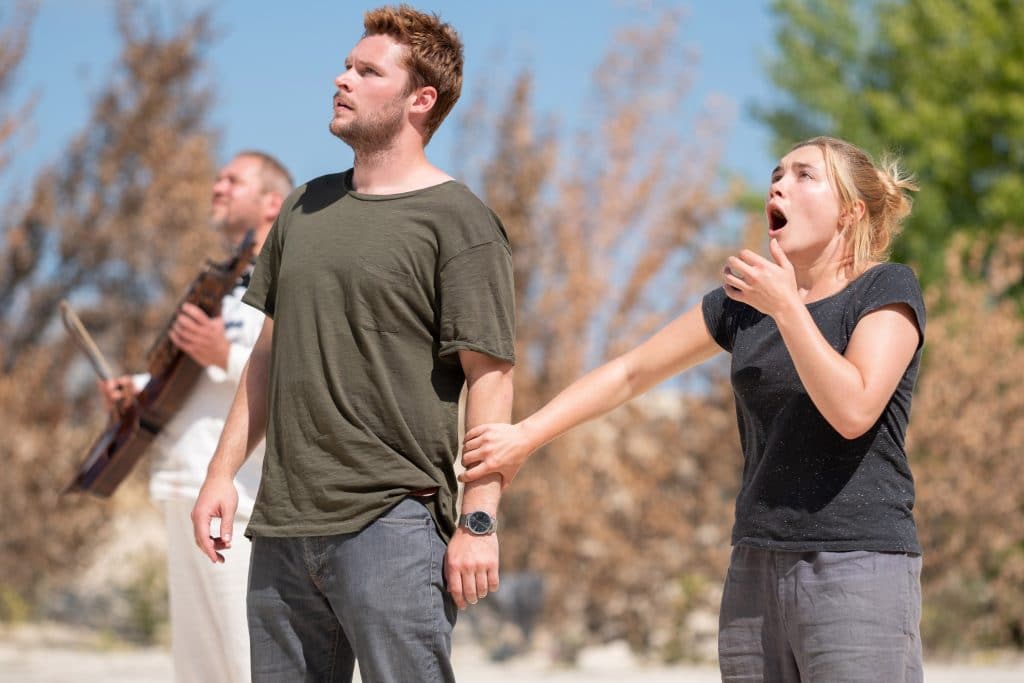 Oh, shit: shit happens. Or “Holy shit, right?” as a doofus American laughs in writer-director Ari Aster’s second feast of grief, the anthropo-horror “Midsommar,” it’s not good grief, it’s grievous goodness: pain is protracted, agony prolonged, and so much of it is a manifestation of what is simmering inside its troubled central couple. Then the unforeseen pagan mysteries revealed under the midnight sun blow it up to nightmare scale. It’s also blackly funny, down to the brutal and extravagant final shot: a perverse post-Falconetti close-up that is both magisterial and hilarious. A character arrives, is anointed: avaricious beauty and brute malice make a final floral gesture.

Aster’s detail-drenched, languorous, even ponderous follow-up to “Hereditary” is multitudes. For the want of ritual, romance has faded. There are many, many ways to look at his broad-daylight Americans-among-Scandinavian pagans picture, assigned to Aster at first as a writing assignment to put an art-house gloss on the set-up of the “Hostel” movies. As Aster started to write, he relates, a relationship blistered and burst, and something more savage got pounded out. Passing over the many plot surprises and acts not limited to head trauma, each frame is pregnant with detail. The elements hammer into place like a sledge joining stones: the work is clean without worrying with “subtlety.”

The movie’s deliberate pacing boasts bursts of nightmarish snap and vigor, leavened with humor: a huge animal in a cage is introduced incidentally within a tracking shot with an American character’s throwaway, “So we’re just gonna ignore the bear?” (“Midsommar” is also a full-length rendering of Harold Ramis’ stock answer when young men asked what advice he would give a young filmmaker: “Dump her, she’s no good for you.”)

“Midsommar,” ratcheting its tension to two hours and twenty minutes, makes room narratively as well as visually for controlling, controlled, mousetrap design. Ravishing claptrap, brute silliness, “Midsommar” is also a vehicle for the talents of the exceptional Florence Pugh as the young woman struck again and again by tragedy, left to the inattention of a disaffected boyfriend and his patch of comically lame grad-student bros. (“Kind of outrageously unsubtle,” a sacrifice-to-be offers of one more cruel turn.) Pugh starts at tactile and quietly wizens into the tectonic. She has moments—all of them. 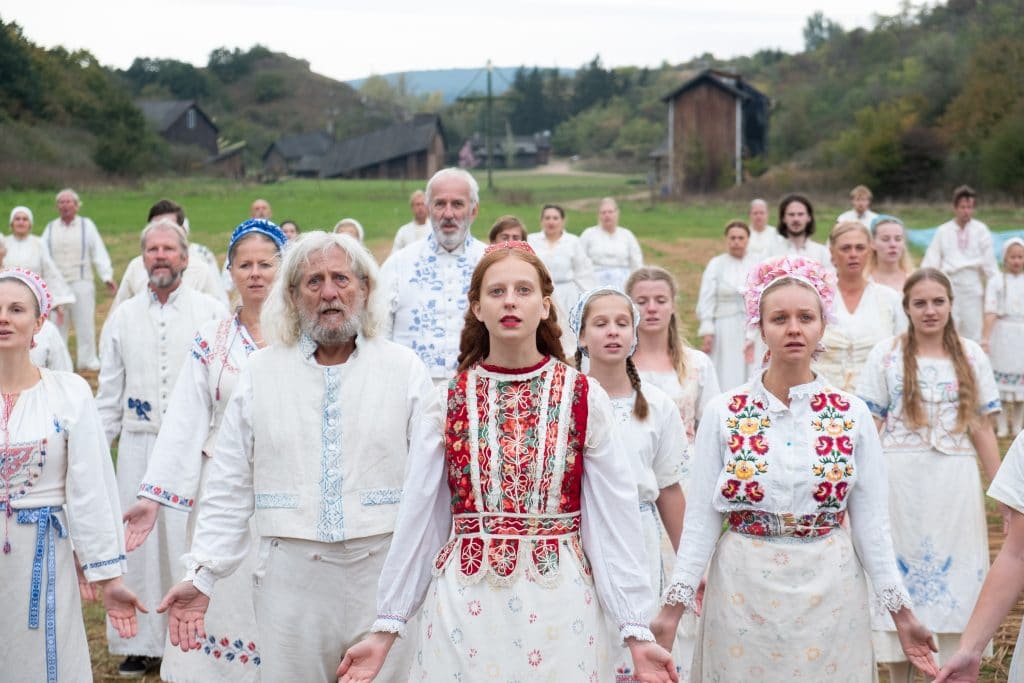 The trippy way of its pack of near-clueless Americans is darkened with plausible influences—“Wicker Man,” “Barry Lyndon,” Peter Greenaway and movies from the Weird Greek Wave like “Dogtooth” and maybe even David E. Durston’s “I Drink Your Blood” (1970).

MIDSOMMAR will be to relationships what OFFICE SPACE was to jobs.

Here’s a slice of the eclectic roll call of influences Aster cites for his piss-elegant procession: artist Joel-Peter Witkin, Ingmar Bergman’s “Scenes from a Marriage,” works by Sergei Parajanov, Lars von Trier, and Gaspar Noé and Albert Brooks’ “Modern Romance,” which Aster calls his “favorite breakup movie ever.” (The shrugged-off line by one of the grad-student jerks, “It’s cultural,” is in the Brooks zone.) I’m partial to taking “Midsommar” as “Texas Chain Saw Massacre” told in tableaux art-directed by Kinfolk magazine. 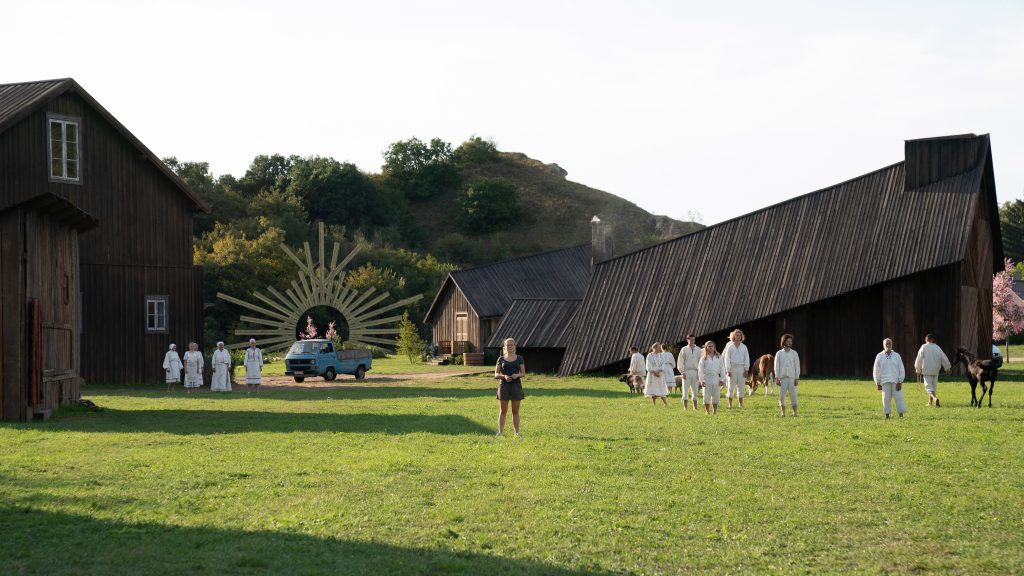 Shot on a plain in Hungary (as Sweden was too costly), where Miklos Jancso’s camera captured ritual dances to history, the village’s few buildings under the midnight sun are sweetly imagined, geometrically collapsed brutalist renditions of rural architecture. Like an elemental drawing; like a dream half-recalled.

Some very cost-effective casting – all non-speaking parts are played by Hungarians, including Florence Pugh’s parents.

But punishment comes, penance is not offered: the fates of the ugly Americans are transformed through into bold ritual, a life-and-death “Salò”-bration.

Thank you for hugging me, everyone needs a hug after watching that film. https://t.co/3M7XUPPyWQ

Is there justice? Is this justice? It’s nasty work, and that’s a good thing. 140m. (Ray Pride)