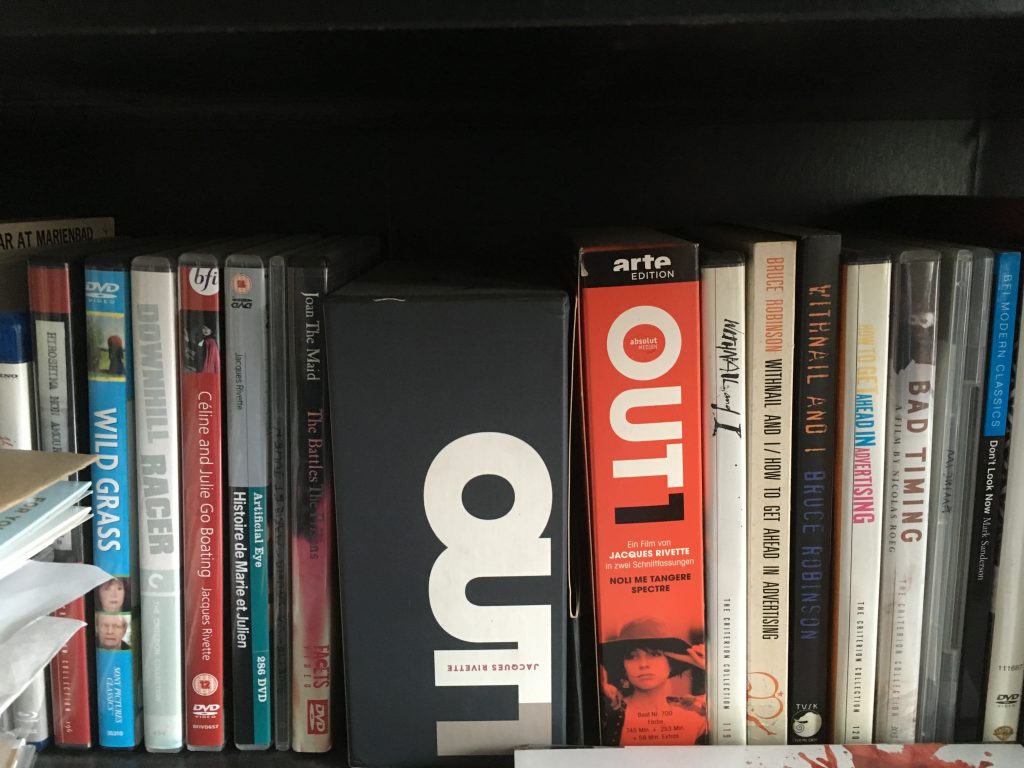 I built the wall. And the wall took nearly twenty years.

Blu-rays, consumer DVDs, preview screener DVDs, they furnish tall bookcases in my home office: the wall facing west holds a chunky mass of treasures of the past century of movies (and particularly the last fifty years) that describe the possibilities, the narrative and lyrical potential of the feature-film form as I’ve studied it. The exposed brick wall, built in 1913, peeps above the all-but-filled shelves, with two more cases on the east side of the writing room. It’s not the display that collectors of vinyl will always find room for, and then more room for. But the amount of media that can stand in that space is substantial—substantial enough I haven’t counted the number of titles, won’t count.

I stand in the middle of the space looking at the past. Why does this array seem like the future for anyone who’s film-fixated? A few reasons, among them that streaming is not what many consumers take it for. Intellectual property from decades past still must cover costs for library owners, leasing to multiple channels and services, for limited-time licensing. It’s a mirage to imagine an economy that provides any given viewer every film, everywhere, all the time. Take the time to read the EULA (end-user license agreement) that governs the “purchase” of a digital copy of a movie: boiling it down to simplest terms? You don’t own it. And you can’t transfer it, the way I hand along three movies by a relatively esoteric filmmaker that an impressionable friend down the block just discovered. Plus, reminding them there’s more where that came from if they just get them back in a reasonable time. (This is why it’s an archive, not a hoard.)

Screenwriter-producer-novelist-comics writer-compulsive, the skull-thunderingly productive Warren Ellis, sends out a Sunday newsletter, Orbital Operations, with bulletins on his output and linking to work he’s found inspiring or diverting. (Along with amusingly brittle woe-is-me plaints about mortality and art and eternity and deadline after deadline.) Ellis has been on a jag against streaming and for physical media. “I am re-building my personal media library, which involves finding CDs and DVDs that have been scattered to the four corners of my house over the years,” Ellis writes, “and buying new CDs and DVDs because I can’t keep relying on the internet (and a solid connection) or digital storage for this shit. Clearly I have problems.”

Another problem for films proper: Movies only a few decades old are in danger not only of being withheld, but disappearing altogether. And the movies that don’t make the preservation cut are either a restoration tragedy or pirating waiting to happen. YouTube has become a repository of American rarities from the 1930s and 1940s and national cinemas from around the planet even as Netflix ignores older movies.

The steady stream of rereleases and restorations of older movies continues this summer, work that embarrasses far too many Friday openings. They’re genuine gems, ones that stood the test of time but also the gauntlet of restoration finance required to make them “new” again. Hal Hartley worked his way through his 1990s comedies in Blu-ray editions, augmented by Kickstarter and Japanese collectors. The Music Box hosts John Cameron Mitchell’s “Hedwig and the Angry Inch” (2001) this month, less than twenty years on, as well as a 4K restoration of John Carpenter’s “Escape from New York” (1981). The materials that films shot on celluloid are made from are fragile, and let’s not start on the vast expense of preserving material that was born digitally. (And the end result, of course, is an upgraded version of the restoration’s physical media for those who must, must have it.)

July attractions from the indefatigable Chicago Film Society include a fine oddity: a “restoration” of a thing that never was—until now—the debut of a freshly-struck 35mm print of the best feature film of 2017, Sean Baker’s “The Florida Project.” (Baker will present the show.) Shot on film by master cinematographer Alexis Zabe, it was released theatrically in the now-standard DCP (digital cinema package) format. (CFS also was instrumental in striking new 35mm prints of Hartley’s “Trust,” which they showed in June.)

It’s warming to know that I have to step only a few steps toward that alphabetized physicality. (It’s tempting to pause, stand in front of the Bs, and slip into the exuberant ending of “The Florida Project.”) I’m pretty sure I have at least thirty of any given day’s list of fifty favorite films. That’s a lot of pretty pictures, all in their sleeves and cases. It’s dispiriting, too, this still-modest archive of features and shorts and documentaries that would take years to watch or watch again. Yet reaching toward a familiar streak of greatness, if only to watch a scene, an ending—the end of “Stalker”? Any twenty minutes of a movie by Altman, Almodóvar, P. Anderson, W. Anderson, Antonioni, Assayas and through B and beyond—is more cheering than that diminishing number of releases from the shrunken studios.

The other recurring vision is pavement covered with a slick of cracked, empty cases, crushed underfoot and under truck and car. Someone’s done their civilized thing, it would appear: the discs proper slipped into slim loose-leaf binders. (There are about forty of those in my office, too, off to the side, in a closet.) The rest of it? Ephemera be gone! Clutter no more! No sentimentality!

Ellis plainly disagrees, and I guess I do, too. “I have developed a new hobby/habit,” he elaborates in another missive, “rebuilding my media collection. CDs and DVDs and Blu-rays. I’ve mentioned why before—some things, you can’t find on streaming, or they disappear from streaming, and storage solutions for downloads fail, and one day Bandcamp will die just as eMusic did. In the course of obtaining physical copies of things I only had on digital that I feel like I need physical copies of, I fell into the collector’s-mania k-hole that is Discogs. So I may need to pick up more work just to stave off bankruptcy.” But while clinging to the bulwark of image and sounds to consult at will, Ellis shares his clear-headed variation on “does it bring joy?” “I’m also filling bags with things I don’t want any more, to take to charity shops. This is important. Because when I was young and poor, most of my books and music came from charity shops, and you have to pay that back and keep that going.”

That’s a different but no less integral aspect of the furthering of personal taste: that of the artists of the present and future, poor and hungry, not quite destitute, eager to pay next to nothing for unlikely top finds at a junk store or pawnshop, such as a Canadian first-issue DVD of Lynne Ramsay’s out-of-print psycho-surrealist marvel, “Morvern Callar,” two bucks plain. You don’t get to lick emulsion, but you can touch as well as see and hear a movie. Yes, there’s also Facets and Odd Obsession, as well as the public library, but sometimes, it’s good to hold a thing, an object, an artifact of experience. The carefully marshaled home médiathèque can be a refuge, a wall of dreams instead of physical boundaries.