“The Florida Project,” Sean Baker’s effortlessly headlong dive into a child’s imagination is a tender thunderclap, brisk, observant, funny, and built upon the writer-director’s customary attention to issues of class, and more specifically, the underclass. (It remains my choice for the best American feature film of 2017.) The Chicago Film Society hosts a premiere of a 35mm print of the movie, with Baker on hand. “Florida Project” was shot on film, but distributed in the standard DCP format. Below, Baker tells us how the print came to be. “It can break your heart all the way from here to the first and second and fourth and fifth time you remember its many loving, lovely moments,” I wrote at the time. “We’re slipped into a scrupulously observed moldering Florida during summer break. At the Magic Castle motel complex, painted purple-on-purple, on U.S. Highway 192 near Orlando, along several miles of other, equally bold pastel color schemes and knockoff tourist shops, a couple of miles from Disney World, six-year-old Moonee lives with her twenty-two-year-old mother, Halley (Bria Vinaite). Halley is strapped to find work each day, less-than-zero busted, and pays exorbitant weekly rates so they aren’t wholly homeless. Moonee (the incandescent Brooklynn Prince) is vitally, voraciously alive. Playing with friends and getting into latter-day worlds of trouble that aren’t far removed from the “Our Gang” comedies of an earlier economic depression, the world may confound her sometimes but all is a playground, an adventure. Fairytales arise for these bright, disadvantaged kids, even at small, tempting distance from the shiny, manufactured Disney false fronts. Willem Dafoe is also a marvel, understated as Bobby, the patient motel manager, a good man also challenged each day.” 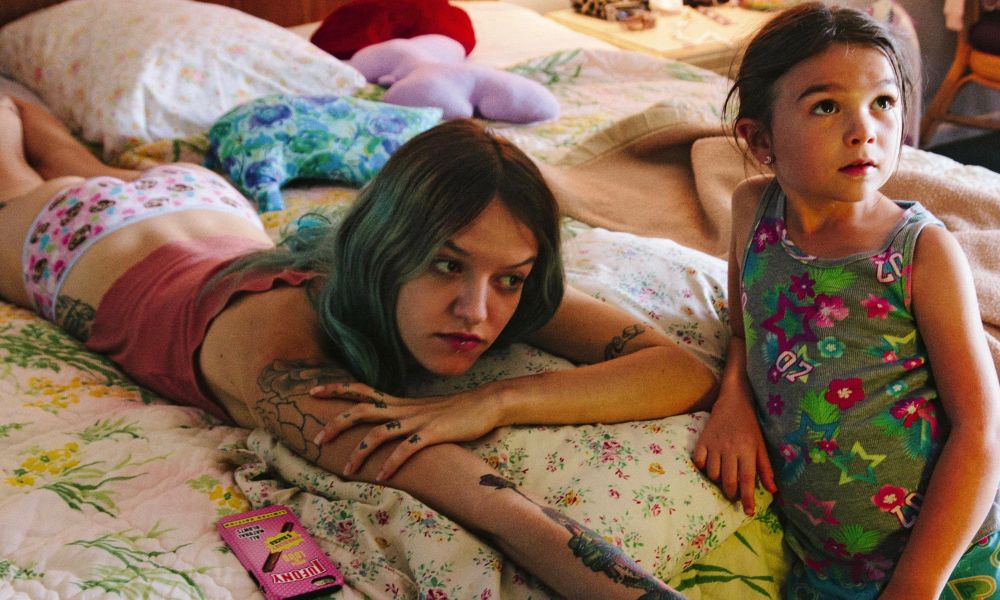 The costume design and production design should blaze on 35mm, as well as the light of cinematographer Alexis Zabe. “The reason I chose him for this, well, not chose him, the reason I asked him to do this is that he has that sensibility in which he can capture this, for lack of a better word, this ‘highbrow,’ really mature, very, I would say, just, sophisticated cinematography. But he also has this music video career in which he’s doing Die Antwoord videos and Pharrell’s ‘Happy’ video in which these colors are through the roof. I wanted him to meld those two worlds, his wonderful 35mm widescreen cinematography that he did with [Carlos Reygadas’] ‘Silent Light,’ then bringing that pop sensibility of his music videos and finding a middle ground.” [For more of the 2017 interview, go here.] “The great folks at A24 are responsible for striking the print of ‘The Florida Project,'” Baker says. “They understand the value of having one. It is not only for superior exhibition—in cinemas that still can project film!—but for longterm archival preservation of the film. A 35mm internegative is still the most secure and reliable way of archiving. The color scientists at FotoKem in Los Angeles labored over giving us a print that accurately represents the qualities of the original negative. And in my opinion, watching the film projected on 35mm is superior to watching a digital projection because it brings back the organic qualities of the medium.

“It feels more alive because the subliminal flicker is now present and the celluloid smooths out the hard digital edges,” Baker continues. “I, along with cinematographer Alexis Zabe, supervised and approved the print. I personally feel it looks gorgeous and truly shows off Zabe’s awesome talent. The print will be traveling around the United States, and I will try to attend as many screenings as possible to present the film and answer questions at Q&As. The Chicago Film Society were the first to express interest in exhibiting it and I’m ecstatic that the print is showing at the historic Music Box Theater.”

Sean Baker will present “The Florida Project” with the Chicago Film Society at the Music Box, Monday, July 22. Tickets here.