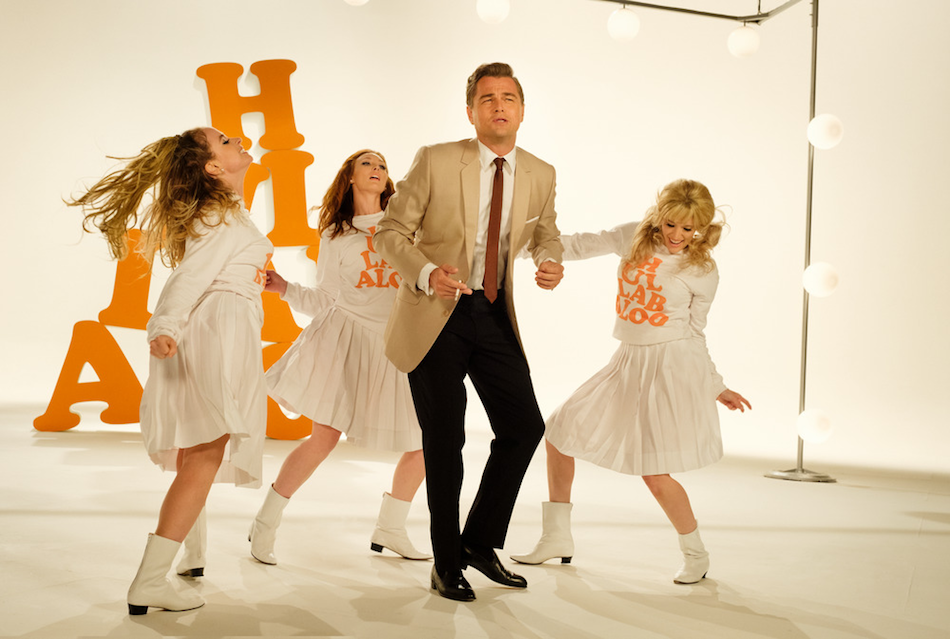 Quentin Tarantino’s melancholy pop-rocket picaresque “Once Upon a Time … in Hollywood” is the truest of true “hang-out” movies: key characters spend the greater part of their screen time getting from one place to another, jawing, wandering blissfully, even wantonly to an incessant song score, across a delirious period landscape, a wholly realized world. It’s also a Western, a war movie, and a snow globe, shaken now and again, of Tarantino’s fascination with the filmmaking process. (Is this Tarantino’s template-toss of Howard Hawks’ “Rio Bravo”?)


A swarming cast crosses the fates of three characters over three days in another time: Rick Dalton (Leonardo DiCaprio, hilarious and tragic, too), a stammering falling star with a drinking problem; his stunt double-turned-body man/dogsbody, Cliff Booth (Brad Pitt embodying epic sangfroid), who has a knack for abrupt violence—“More than a brother but less than a wife”—and Rick’s neighbor, Sharon Tate (Margot Robbie, archetypal yet human, so human), a young actress who competes unfairly with the inexorable Southern California sunshine.

Produced for over $100 million (before tax rebates) by many reports, “Once Upon a Time …” also functions as the most costly, most grandiloquent piece of installation art ever fashioned. The audience joins the characters in breezing through a hyper-real re-creation of 1969 Los Angeles, cruising to that seamless soundtrack of songs and movie trailers and television excerpts and sound cues from fifty years ago, each composition bejeweled with bold, expressive period trappings. (Welcome to my vision, please return at your leisure.)

Los Angeles artist Ed Kienholz was making sculptures in this era, constructing the notorious eatery Barney’s Beanery (1965) as well as teen lovers in “Back Seat Dodge ‘38” (1964), a pair of figures making out atop a high drive overlooking the lights of the city. (Scenes and seeing.) Tarantino’s self-proclaimed ninth feature is a worthy mod explosion of all the sorts of keyholes Kienholz might have peered through, as a grown-up in the time Tarantino was an avid six-year-old in similar bristling barrens. 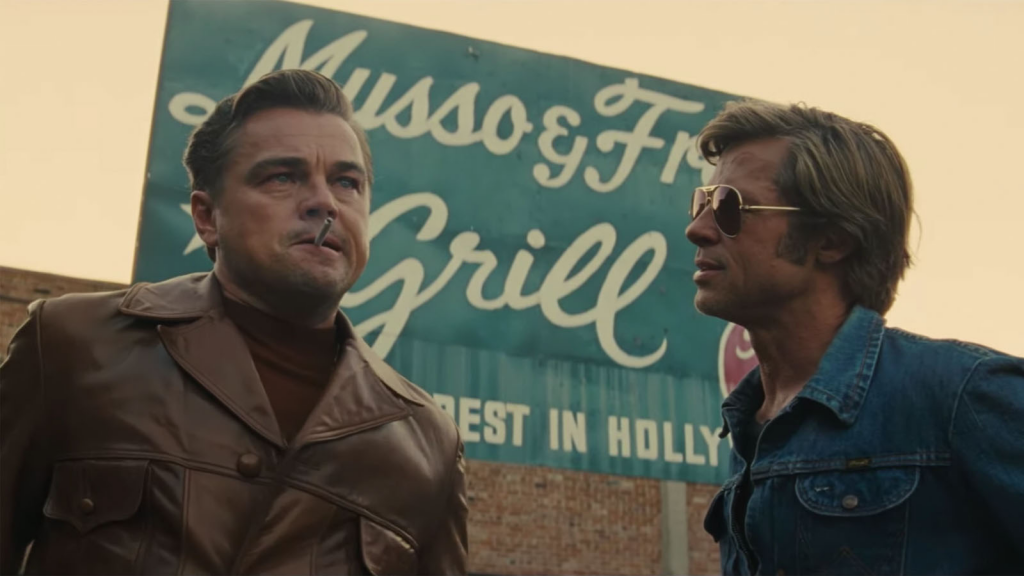 “Once Upon a Time …” is as much a bathysphere of the tactile and ear-caressing and eyeball-grabbing as any sort of narrative armature: Objects, objectified. (The tapestry of reckless riches is akin to the crazy comedy of 1941’s absurdist sketch comedy, “Hellzapoppin’”: You thought that was nuts, look what’s literally around this corner!)

“Once …” is also the fifty-six-year-old writer-director-producer’s bittersweet and self-aware comedy about the fear of failure and lasting inconsequence, the lingering fear of racketing in middle age toward indelible catastrophe, or at least, onrushing obsolescence. It’s also deeply observant of the vagaries of class strictures and male friendship and the ups and downs and very much ups of artistic exertion. (“You’re Rick Fucking Dalton, don’t fucking forget it” is Rick Fucking Dalton’s mantra.) 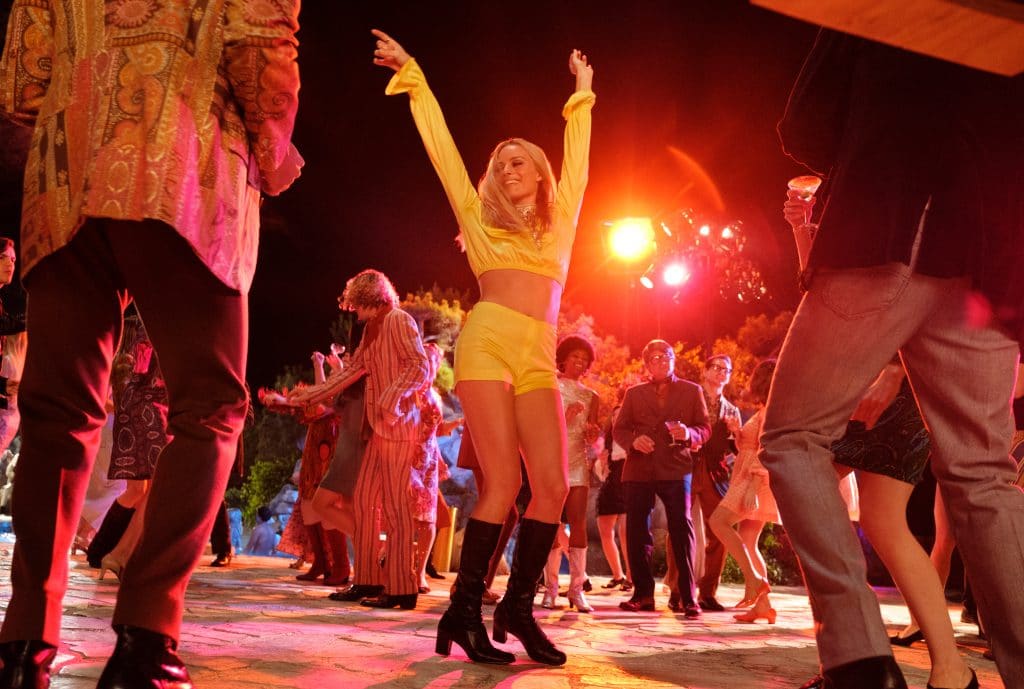 A brief flash-forward for Tarantino’s survey of women’s bare feet: by a single viewing’s count, there are twenty-four shots held on soles and toes, with at least six qualifying as “hero shots,” holding center frame, seen from behind windshields or filling the frame from dead center. The first of the displays of the lower extremity: a sleeping Sharon Tate, feet bare, legs scissored. A bus with a placard for “Combat” exits the screen, revealing young girls with their knees upraised. (A reverse angle of this shot reveals a billboard in the distance displaying a thick, huge red steak.) The most grandiose of these heroine shots comes when Sharon watches herself onscreen (actually Robbie watching the real-life Tate) in “The Wrecking Crew” at the Bruin, bare feet over a railing, glimpsed at first in shadow, partially blocking the frame, and then a reverse angle in which the light dancing over her face is like love itself, sharing the frame with Robbie’s soles, shapely, arched and definitely dirty. Young women’s feet are also plastered against windshields, seen filling the frame from the perspective of the hood of the car in fully splayed fetishistic display. (The Spahn Ranch, where the flock of Manson girls entrenched themselves, offers group shots and medium shots of feet and toes.)

ONCE UPON A TIME IN HOLLYWOOD is beautiful. If you’ve worked in your chosen field long enough and never reached the heights you hoped for, you’ll relate like hell. And you’ll know it’s all gonna be okay because the world wouldn’t be what it is without you. And that’s something.

“Once Upon A Time … “ is a manufactured continuum of lost time and lingering space. Look upon Hollywood Boulevard marquees, storefronts refashioned with Kubrickian alacrity. Logos real and false: Pan Am planes; 35mm film tins with Technicolor-logo labels; Hormel chili; Tang; Kraft dinners; a made-up dog-food brand in cans the size of a human head; Sgt. Fury comics. (Proust’s madeleine revisited as a carton of Hi Ho crackers.) Sound and self-reference: Robert Goulet singing “MacArthur Park” on a long-gone TV show; a defunct NBC network chime; that LAX corridor with pastel-color tile squares also seen in “Jackie Brown”; a sun-dappled-to-rust blue Karmann Ghia, palm-tree debris filthy and like one that had been in Tarantino’s family; the placement of the José Feliciano version of “California Dreamin’” and then “Out Of Time” under a montage of its characters in motion, on streets and freeways in falling dusk at the film’s final juncture between historic recreation and fairytale reinvention.

Sorrow steeps the loveliest montage, of the city’s vernacular neon. Rare gases spark to glory at dusk at a dozen or more locations: the Frolic Room; the Pantages; Musso & Frank; an original Taco Bell; El Coyote. Another trick of time: an extended convoluted comic-action flashback, begun when Cliff begins to light a cigarette on a roof, which then ends many minutes later with Cliff yet to light, a callback to Edgar G. Ulmer’s 1948 B-movie great “Ruthless.”

Punching a hippie is the most “noble” act any character performs until the time folds of the last scenes; the stringy men are in the company of teenagers in sandals and short skirts and tank tops who are presented as temptation incarnate: filthy dirty hippie girls hoping to force car-ride fellatio on kindly strangers. While the object of the punching is an archetypal buffoon, a literal (and levitating) depiction of “hippie punching” is presented as a bone-crunching punishment. (A comic cameo of a superb Damian Lewis as Steve McQueen includes a ration of hippie smiting but resounds within the screenplay’s offhanded yet dense dovetailing.)

Has anybody done anything yet with the fact that the Spahn girls in ONCE UPON A TIME IN HOLLYWOOD are mostly either child stars or children of prominent parents? Even Kevin Smith’s daughter is in the mix back there, plus your Maya Hawke, Margaret Qualley, Lena Dunham counts… pic.twitter.com/CsqlpIwRVa

But Sharon Tate and the bright rotten gorgeous landscape through which Sharon bobs gaily and fancy-free: it is not objectification of Sharon or of Margot, but a spirited, touching consideration of the character of innocence, of character and life and potential and possibility that can be stemmed or stopped at any time in our journey. 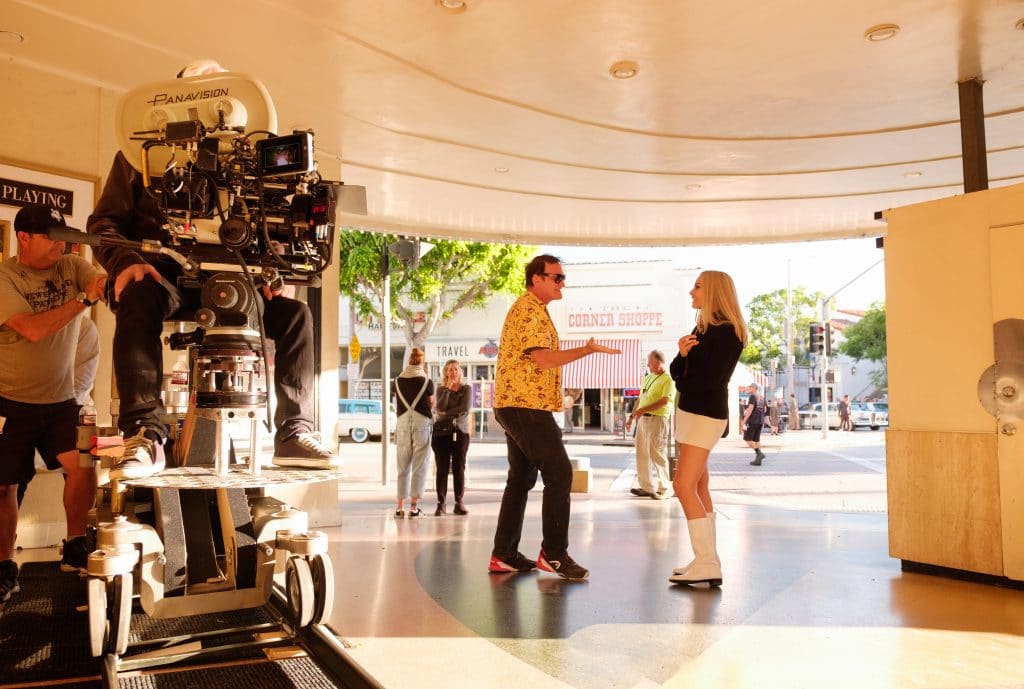 Sharon picks up a female hitchhiker on a specific corner of Wilshire Boulevard and the establishing shot is notably long, offering, before a guileless journey across town accompanied gaily by a pop song, the most arcane conceivable reference to Billy Wilder: the high-rise that Wilder and his modern art collection lived in for decades stands starkly in the center of the frame! As Sharon wanders into a Westwood book shop, “Once Upon a Time … “ invokes at least three movies, two made and one that will be realized in the far future: “The Big Sleep,” “The Maltese Falcon” and “Tess.”

She floats. When she sees herself, even only on lobby cards in a theater foyer, she is delighted and abashed.

Robbie is magnificent, and two other actors are as luminous: Julia Butters, child star godhead, and the electric, ferocious presence of Margaret Qualley. You’ll know them. 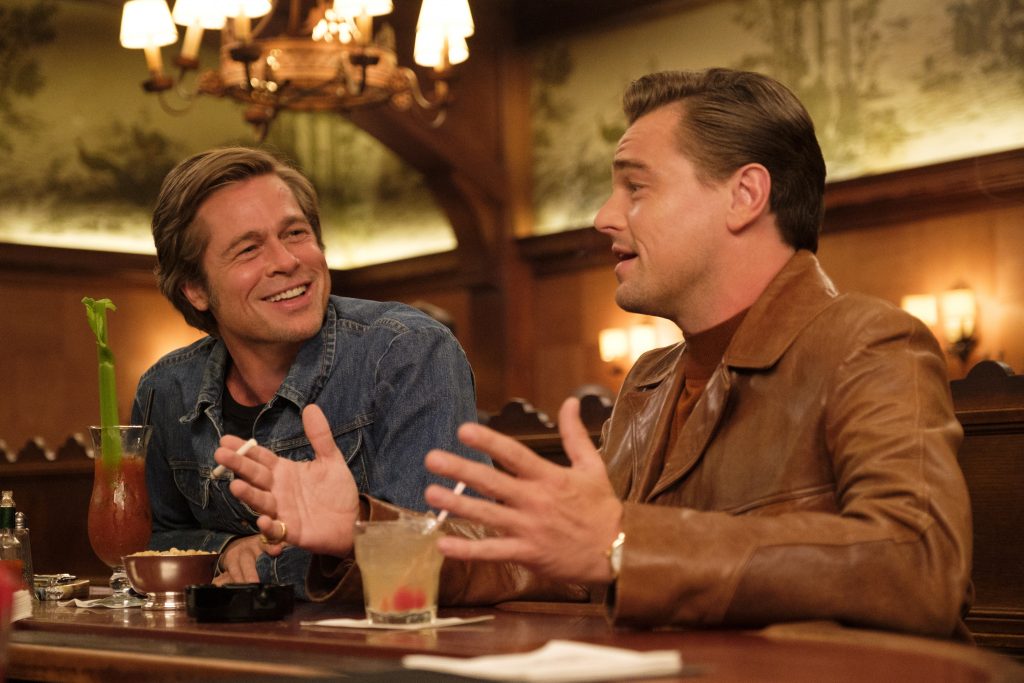 The final shot is exquisite; a crane shot that begins with a geometric composition of calm and simplicity, an infinitesimal yet blooming suggestion of all the patterns, figurative and literal, which preceded it. The shot fills with laughter and then ghosts move into the night, and the camera rises into the innocent rustle of the leaves in the trees on Cielo Drive and the canyons beyond. The shot is nearly nothing, but it is everything in Tarantino’s tumultuous fairytale. Grids are finite yet mutable. Chance occurs. Fate is the word for what happens once opportunity is spent.

Key inspirations cited by Tarantino are listed here. A glimpse of the making of the re-creation of Hollywood Boulevard is here. Early writing I recommend includes Dana Stevens at Slate and A. O. Scott in the New York Times. Bruce Lee’s family responds to Tarantino’s portrayal of the man to L. A. Times’ Jen Yamato.

One of five U.S. 70mm engagements of “Once Upon A Time … in Hollywood” is at the Music Box. Other engagements are in 35mm or standard DCP; check listings. 165m. Widescreen. Reviewed in 35mm.