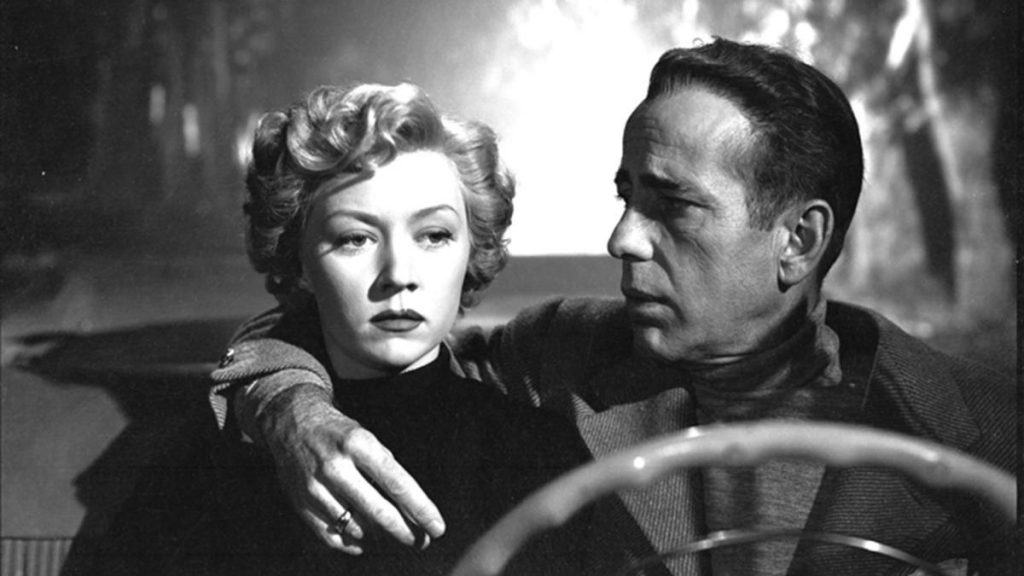 “In a Lonely Place”

“I was born when she kissed me. I died when she left me. I lived a few weeks while she loved me.”

In Nick Ray’s beautiful, quietly savage “In A Lonely Place” (1950), Humphrey Bogart plays a violence-prone screenwriter named “Dix Steele.” His neighbor, Laurel Gray (Gloria Grahame, wife of the director, secretly breaking up with him during the shooting of the film) is involved with Steele, whose intense murder scenarios may have crossed over into real life.

As in the finest exemplars of film noir, the screenplay is a fated funhouse of crisscrossing intentions: not only does Ray burrow into the subtext with his own romantic struggles, he describes how to make movies like the one we’re watching. Steele is articulate about how movies turn emotions into clockwork, how character is revealed: “That’s because they’re not always telling each other how much in love they are,” Dix tells Laurel. “A good love scene should be about something else besides love. For instance, this one: me fixing grapefruit, you sitting over there, dopey, half-asleep. Anyone looking at us could tell we were in love.”

Most of the brute rubies glittering through the Eleventh Annual Noir City Chicago, drawn from the 1950s, are movies that I discovered my sophomore summer at school, where the university film society had access to dozens of 16mm prints, even beyond the ones we rented to show under the season’s “The Summer Dark & Screwy” umbrella. For several months, a few members took full advantage of triple or quadruple features in a small, provisional screening room, with dust in the carpet, motes adrift in the projector beam. I think of noir, I think of dust and ashes and gloom and often doom, largely because of that godsend summer of total immersion that was akin to how, I would learn, the young-and-not-so-young French cineastes, Godard, Truffaut, Rohmer, Rivette, Melville and Chabrol, the “Hitchcocko-Hawksians,” gorged after World War II when the American films we were watching in a tiny cloister on campus had flooded into Parisian cinemas, the MacMahon, the cine-clubs, the Cinémathèque Française. 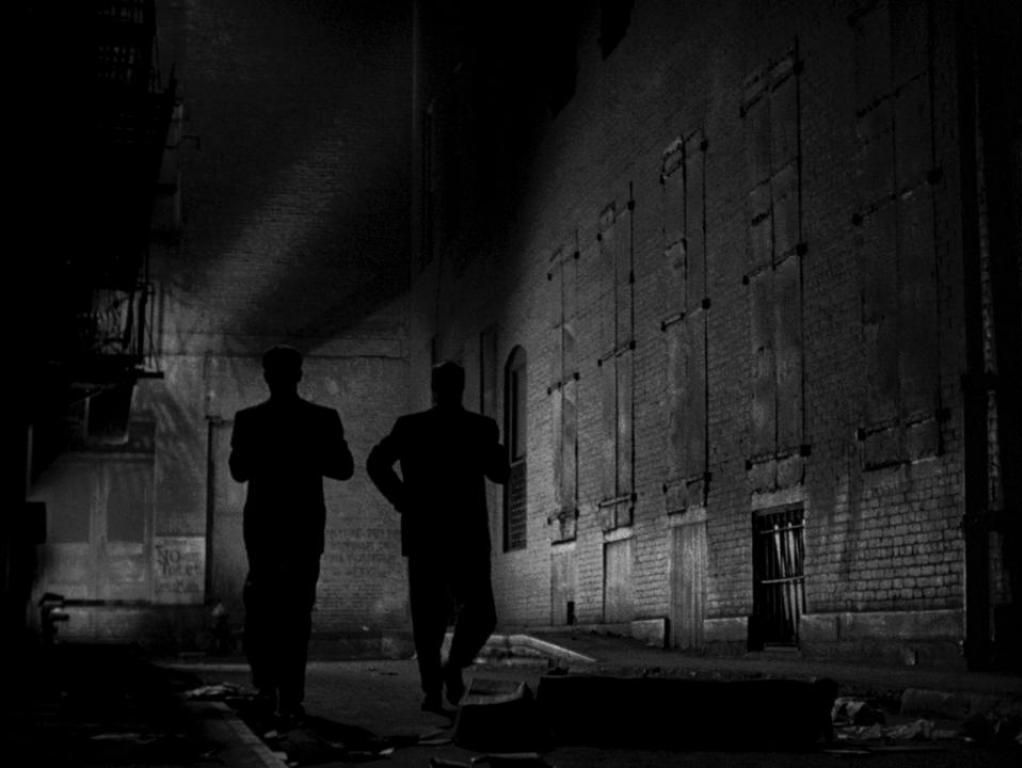 Noir City: Chicago, a collaboration of the Music Box and the nonprofit Film Noir Foundation, has provided similar rare opportunity for eleven years for any devoted local cinephile to feast upon the greatest manifestations of the genre, and on the big screen of a theater where some of the titles might even have played on original release, with nine double features for 2019 to darken the doorstep of your dreams, most shown on 35mm. The Criterion Collection once encouraged “film school in a box” as the best way to describe their library; this selection can be your “film school in a coffin.”

Since 2005, the foundation has facilitated or financed eleven restorations and twenty-two freshly struck 35mm prints. Revenues from ticket sales, the foundation reports, “encourage studio film archives to strike new prints of films that are at risk of disappearing from public view, either through neglect or scarcity.” Once those gems are returned to circulation, “the chances exponentially increase that they will be reissued on DVD, available in pristine, affordable form for future generations of film lovers.” 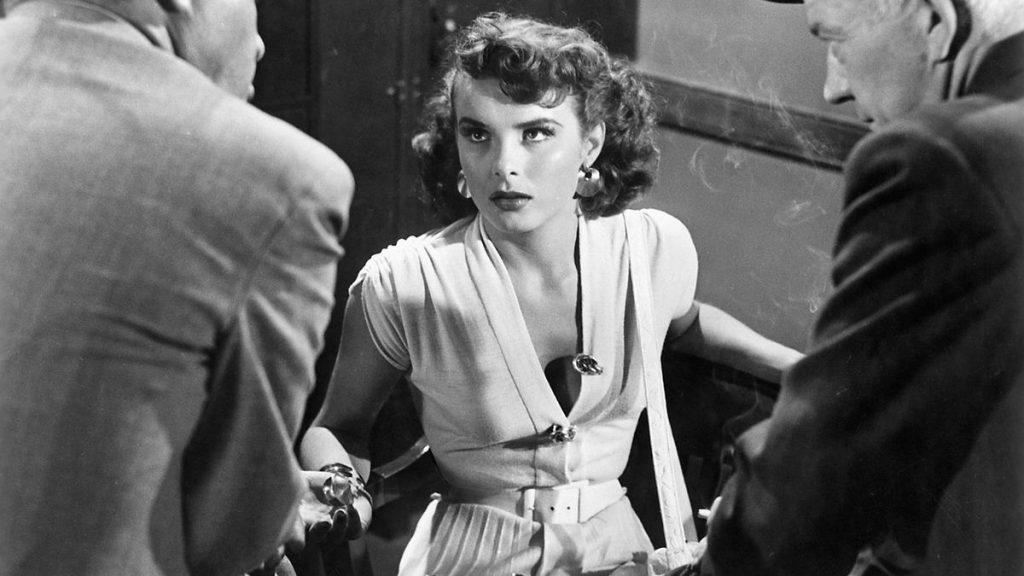 Aside from the glorious range of imagery, of light and location, of geometry and camera movement, there are terrible lessons in love and punishment for a formative young filmgoer. (That was me.) Plus, the lingo sparkles and spanks: the fanciful oratory of noir’s cirque du soliloquy lies atop the spider webs of fate and fortune and the bold monochrome of disillusion and paranoia that electrifies even the most weary characters.

The hard-boiled are tenderhearted when they have a few things on their mind, things they have to get off their chest. “It’s crazy how you can get yourself in a mess sometimes and not even be able to think about it with any sense,” the protagonist narrates in Stanley Kubrick’s “Killer’s Kiss,” “and yet not be able to think about anything else. You get so you’re no good for anything or anybody. Maybe it begins by taking life too serious. Anyway, I think that’s the way it began for me. Just before my fight with Rodriguez three days ago…”

Some words punch beyond the years in which they first were spoken. Dirty dealings between Mexico and the United States spark in Orson Welles’ “Touch of Evil”: “This isn’t the real Mexico. You know that. All border towns bring out the worst in a country. I can just imagine your mother’s face if she could see our honeymoon hotel.” Even “Kiss Me Deadly,” with Ralph Meeker as a perfected jughead troglodyte, has contemporary resonance: “I’ll make a quick guess: You were out with a guy who thought ‘no’ was a three-letter word.” And let’s not neglect the purple patois of that pulp popinjay Sam Fuller, from the thriller “Pickup on South Street,” where gangsters are selling secrets on microfilm to the Soviet Union: “So you’re a Red, who cares? Your money’s as good as anybody else’s.” The world spins, but some things have not changed.

It’s a dark, deadly, beautiful world that refuses to die: see you in the shadows. (Ray Pride)