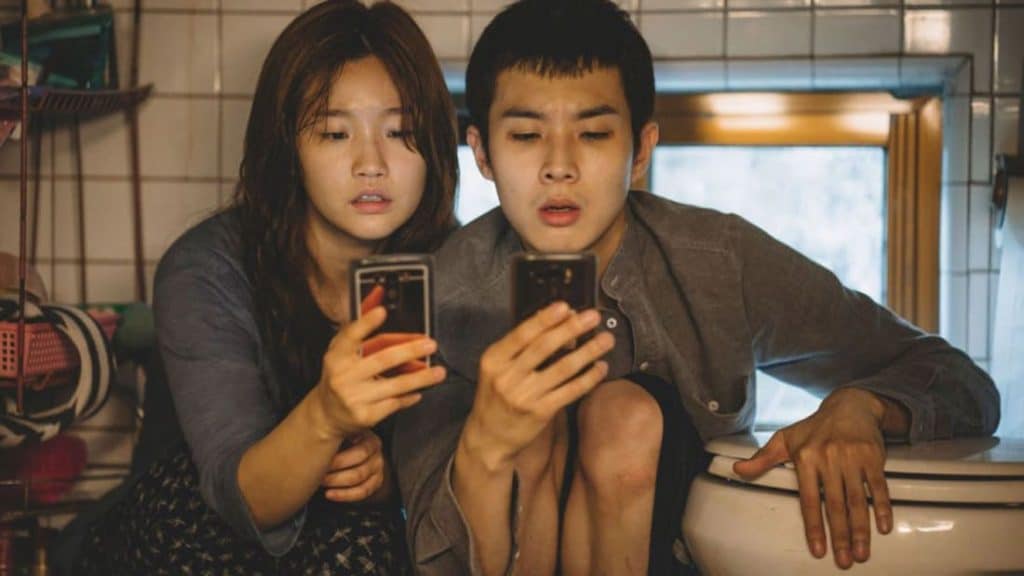 Two immediate reactions to Bong Joon-ho’s “Parasite” as the credits started to roll:

But, in the meantime, uh, wow? San Francisco Chronicle movie reviews for decades have featured instead of stars The Little Man, a figure in a cinema seat who rises to increasing states of excitement. The Little Man never goes hog-wild.

“Parasite” is so good, good enough to get The Little Man up on the roof and threaten to jump if you don’t see Bong’s bravura entertainment on a big, big screen.

Even an appreciative knowledge of that fine filmography is no preparation for the wry, razor-edged comedy of “Parasite,” which I will describe in only the broadest terms. (Go see it; go see it.)

Two families meet: one poor, another, on the bright and shiny surface, extremely well off. An elegant post-modern home is a battlefield in waiting. (Or has it been one for years?) “Parasite” is blunt about what it’s about: class. And yet Bong doesn’t preach. He doesn’t make broadsides. He makes brilliant satires of the stakes of money or the lack of it. (For many years under a dictatorship, South Korea was until very recently an extremely poor nation.)

Bong is a carpenter of atoms: each element of behavior, performance, décor, splash of color, sound of squish, is calibrated and constructed and will not fall. The performances are brilliant, soft and hard, and Bong is adoring but unsparing. Describing even an instant of any of the work by Song Kang-ho, Jang Hye-jin, Choi Woo-shik, Park So-dam, Lee Sun-kyun, Cho Yeo-jeong, Jung Ji-so, Jung Hyun-jun would be a crime against the unfolding delight of Bong’s dense, yet effortless, delicious thriller with very large teeth, smiling generously at its own grace. “Parasite” is confident, sweeping widescreen entertainment. 131m. (Ray Pride)