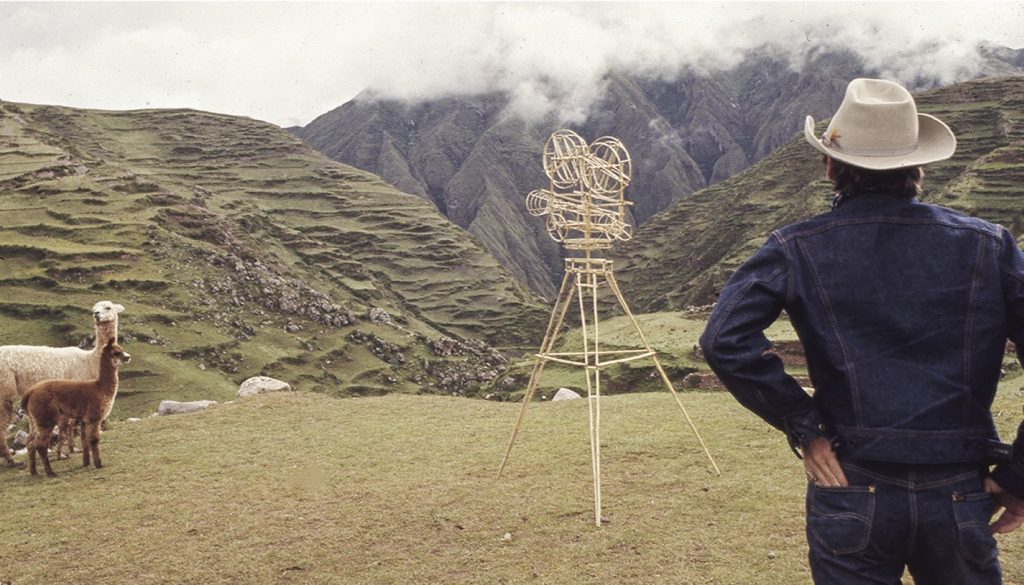 When you’ve seen enough movies in enough places, in drive-ins from childhood and city palaces in adulthood, do you remember the places as well, if not better than the films themselves? The edifice as much as the onscreen evidence? I do. (You should be able to remember what’s around or behind the flatscreen in your living room.) I’m not Marilu Henner, I don’t remember the exact seat and what she said and what I said and if the Dots were juicy-fresh. But I remember the seat I chose, best for the movie in that particular space.

The memory of dreams projected, played out in spaces: my own dreams I remember and photographs I take are often that frame within frame: the scene, also seen.

Remembering where you were in the theater is a strange passion, and not the same as being surrounded by ephemera, the collection of stills and pressbooks and posters, the graven images in worship of the bright, transient graven images, nor touching film or projecting film.

In the gorgeous, obstinate delirium of Dennis Hopper’s “The Last Movie,” a filmmaker’s journey atop mountains in Peru with crew and natives in tow, the local citizenry want to “make movies,” too, and enact rituals with a camera and tripod they fashion from wood. They had no notion of a finished film (which “The Last Movie” pretends not to be), but only of incantation, repetition, séance.

No longer a whisper of a rumor of a film, a digital restoration of “The Last Movie” shows in November at Siskel. It was a grail when I first encountered it in college, a film that our film society was told had disappeared from the face of the planet, or at least from the Universal Pictures film depots.

We asked the right person the right questions, a practice that led to the most memorable screenings those years, and a few days later, a 16mm print arrived, a couple of twangy reels in a battered hard-cardboard carton belted with woven green straps.

Its notoriety was intense. We mostly gorged on noir and movies of the 1970s. We didn’t want to wait to spec the print in the tiny screening room before its weekend midnight screenings, we decided to hold it, touch it, place it on a nearby flatbed editing table to decipher the reported mysteries of the movie that supposedly included single, flash frames. (I heard that print never made its way back to the warehouse.)

That “screening” of those reels once they were dredged from a depot in Atlanta or Dallas or maybe just Chicago, is a 360-degree hallucination in memory: the room, what was on the wall, what we were wearing. (The faces we made at each other when strange and beautiful things began to happen.) We studied the strangest bits of it on the flatbed, the way we did all of Tex Avery’s cartoons: show us your carnal mysteries! The images that are engraved in memory are luscious tableaux, striking close-ups: still photographs of a place where a happening took place.

From a stack of recent Blu-ray reissues, I can pick the place where I first saw them one-by-one.

Belmondo in Jean-Pierre Melville’s “Le Doulos” (The Film Center’s old black box theater, once on Columbus Drive, front row.) Melville had his own studio for a time, and recycled bits of sets, especially one particular stairway, through multiple 1960s movies. With the sort of sense of place I’m describing, it’s a small but genuine hallucination to see fate befalling yet another character in the same window or hallway.

Elliott Gould and Christopher Plummer in the fevered revenge thriller, “The Silent Partner” (Biograph Theater, Lincoln Avenue, ran for months, saw it three times, fourth row center; the owner, Larry Edwards, was in a spirited give-and-take about real estate in the lobby that first Sunday afternoon.)

“Bob le Flambeur,” Jean-Pierre Melville’s dour lark of gamblers by night in now-fallen Montmartre in Paris (The Fine Arts, Michigan Avenue, all the way to the back, dead center; the big-cheese art-house of its time.)

And that visceral, even primal evocation of childhood fears in a Brit’s fictive American South that still somehow resembled mine, Philip Ridley’s long-missing “The Reflecting Skin” (1990). (One of the three private screening rooms at Cinecenter, inside a high-rise on Elm Street.)

Siskel and Ebert previewed most movies there. Irv Kupcinet was still alive and snoring. Kupcinet and others invited nightlife performers who were in town, including semi-regular Carol Channing, who would try to whisper when explaining plot details to her slightly deaf consort. (“Yes, he’s hiding in the closet” in a stage whisper in her drawn-out delivery was, like all her murmuring, indelible.)

A few minutes into the screening of “The Reflecting Skin,” the shimmering weirdness of Ridley’s grandiose Gothic was not just mounting but already in full display: children, gathered around a toad on a Southern country dirt road, fought over the right to inflate and explode the unfortunate animal. “You always get to blow! I never get to blow!” one boy yells.

I looked to the left of the small screening room, where the then-seventy-year-old songwriter and succinct schmoozer Sammy Cahn, a regular when performing at the Wellington Theater, was, as always, enjoying the use of the courtesy telephone. Cahn was taken by the onscreen goings-on. “I’ll have to get back to you,” the ace lyricist of “It’s Magic,” “I Fall In Love Too Easily” and “Call Me Irresponsible” said, delicately placing the receiver down and moving to a middle row seat directly in front of my middle row seat in an audience of more than ten. The movie grows darker and darker in bright summer sun and Sammy Cahn slid, slid, then slouched to watch the entirety of “The Reflecting Skin,” framing my first encounter with it.

The lights came up: “Now what kind of sandwich does that require?” Sammy Cahn said, a smile across his face.

The DCP restoration of “The Last Movie” shows at Siskel on November 17-18, alongside Nick Ebeling’s “Along For The Ride,” a portrait of Hopper’s longtime right-hand man, Satya de la Manitou.