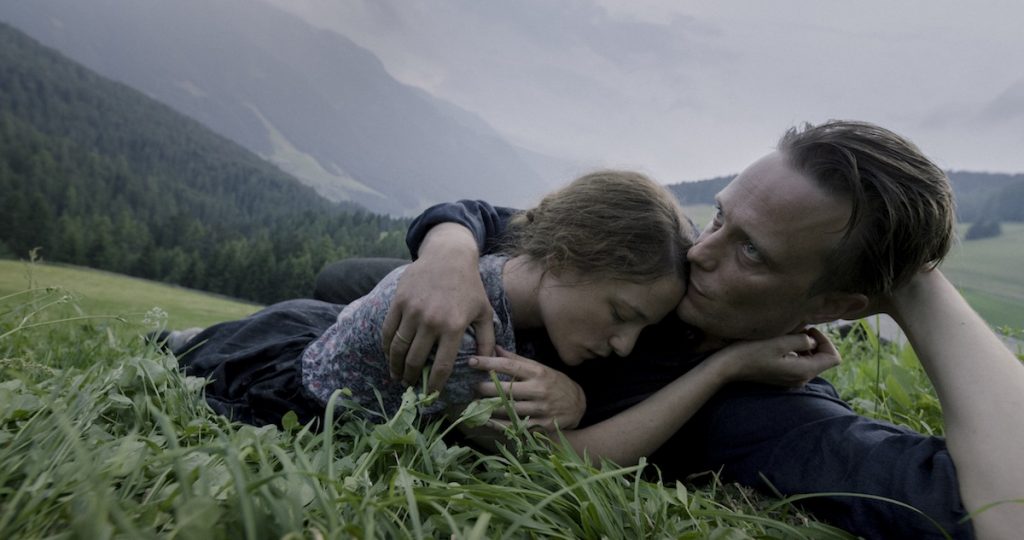 Terrence Malick’s ninth movie, “A Hidden Life,” is a lulling bulwark. Even at nearly three hours, it passes like the sun across the sky and clouds across the Alps, warming, falling, brutally assured. It is timeless and it is timely: Malick’s philosophical concerns run deep and wide, but “A Hidden Life,” wrought from true correspondence and which begins in 1939, stays to one course within its hymn-poem form: it is right to do what is right in the face of massive social wrong. (Malick prefaces his screenplay with words by Kierkegaard: “The tyrant dies, and his rule is over; the martyr dies, and his rule begins.”)

In the mountain town of St. Radegund in upper Austria, among 500 other villagers, peasant farmer Franz Jägerstätter resists: he will be executed for treason if he refuses to salute Hitler and fight for the Nazis. Franz refuses to take an oath to Hitler, who we see in prefatory newsreel footage before we see the village, the villagers—and the townspeople are confused: just say the words, Franz. The world will go on its way. We know what’s in your heart, it’s no compromise.

Malick shoots digitally in natural light, capturing an agrarian past (of only eight decades passed) in wash and glow of ordinary daily tempest; high up, the clouds visit, pass, part. Franz and the other farmers work the sky itself, the selfsame sky that lowered in the black-and-white square of newsreel footage of Hitler skimming from the sky and onto the land and then ranting before a chanting, avid arena crowd.

There is murmur and wonder in voiceover, as in other late Malick, but the style will be new and seductive and haunting to a larger audience that never wandered toward “To The Wonder” and certainly not “Knight of Cups” and “Song to Song.” I’ve steeped in the two most recent creations, as well as “Tree of Life” in its iterations, and what seems familiar in the wash and sweep of Malick’s imagery and pacing would be fresh and vital to viewers, swaddled as it is in the beauty of the surrounding village, caught across a few well-chosen weeks, as in a lifetime of canvases and frescoes by artists including eighteenth-century painter Caspar David Friedrich.

There is further daunting beauty in the clumsy grace of elemental physical compulsion, how Franz (August Diehl) and his wife Franziska (Valerie Pachner) remain in awe of touch and breath and gaze; hoping to divine, define the other: touch, burn, pull away, touch, touch again. Fail. Fail again. Touch. But all that surrounds Franz, the world etched and stitched and woven by the camera (shot by world Steadicam adept Jörg Widmer, who collaborated on the evolving visual style of Malick’s five previous features), in the embrace of wide angles and wide frames that grasp the land and reach to the sky, cannot convert the man who knows only that he must do right. The couple’s three small daughters tag behind, dawdle alongside, learning a world.

The villagers grow angry: “Pride! That’s what it is, Pride!” Franz’s moral stance brings opprobrium upon the entire village. Attention. Needless attention. Heedless attention. We hear Hitler’s voice again, cadenced, raving, distant, resting upon the hillsides as dusk’s last fingers of red and orange are lost to charcoal night. “Your mother will die unconsoled” is a further oath the townsmen and women find. Simple words are spoken: “I need you” is the plainest and truest phrase as the couple looks into each other’s faces. “You can’t change the world, the world is stronger.” And once Franz is imprisoned, awaiting judgment, or rather, sentence: “Nature has not noticed the sorrow that has come over people.”

“Save yourself and think what you like,” Franz is told as the sheet of paper is passed by a lawyer over a rude wooden table to be signed. He is not convinced. The world passes and passes again, with Franz and without. With Bruno Ganz, Matthias Schoenaerts, Maria Simon, Tobias Moretti, Karin Neuhäuser, Ulrich Matthes. 173m. (Ray Pride)

“A Hidden Life” is at River East, Evanston Century and Landmark Century and will go wider January 3, 2020.

This is gorgeous writing, the last line got me.