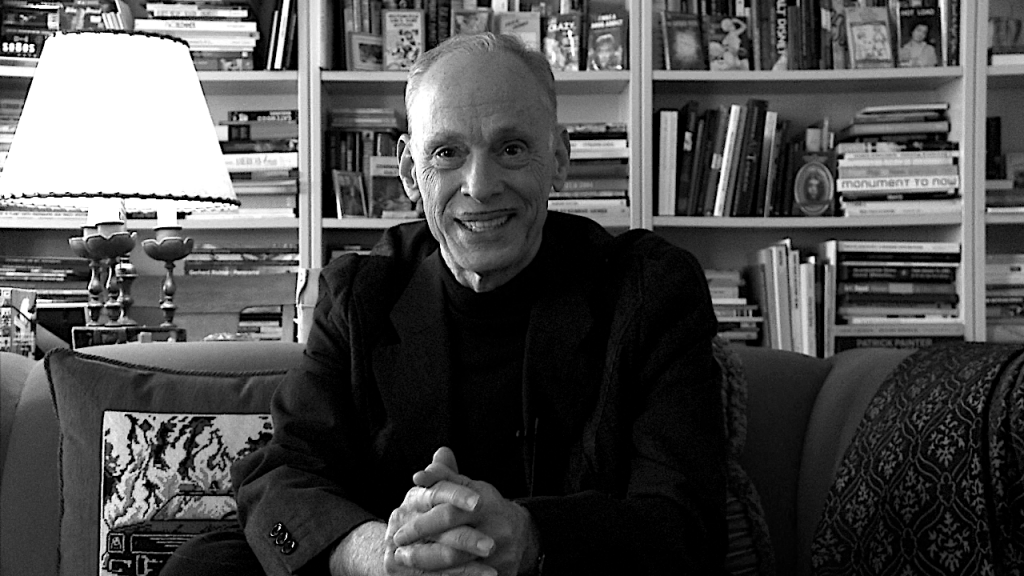 Portland filmmaker James Westby has worked on “At The Video Store,” his documentary playing this weekend as part of the “Stranger Than Fiction” series at Siskel, for a while: I knew that because he had interviewed me while on a Chicago jaunt to visit Odd Obsession (in its former Milwaukee Avenue storefront) and other local outposts, good lord, four-five years ago? In an idiosyncratic personal essay film, Westby visits many of the last (or lasting) edifices and interviews a range of observers including John Waters, Nicole Holofcener, Thelma Schoonmaker, Todd Haynes, Gus van Sant, Lance Bangs, Penelope Spheeris and Bill Hader. A Chicago booking was set while I was still wondering whether a shred of my monologue made the final cut, and Westby and I had an exchange about how the film outlasted many North American video rental storefronts. (I’m moderating the Q&A after the Saturday showing.)

When did this all start? 2012. I shot a short interview with my friend Marc Mohan. He had a joint here in Portland called Video Verite that was about to go out of business. It was just a thought to shoot it sorta for the archives, as it were. Some months later, I interviewed Mike Clark from Movie Madness and then my friends—co-workers at both Videorama, a combo shop that had a gym built into it, and First Stop Video, which later became a Blockbuster. Videorama was a heady mix of jocks and nerds.

What was your thesis? The M.O. was mostly to celebrate my friends and co-workers behind the counter and the nice folks I met along the way. But also to get people renting again, and to advocate for the film-school aspect of the well-curated video store, which is presently the only way to really become a proper movie nerd. People must know this. And I also wanted to make a film that felt kinda like it was made by children, free and loose and full of youthful energy. I had been making a lot of little comedy films with my daughters, and continued doing so concurrently with shooting “At The Video Store.” The esthetic of those movies definitely informed this one: just turn on the camera and shoot. So, in a way, to make a movie feel like it was made by children. Which it kinda was. My daughters were almost always with me when I would shoot B-roll and ended up all over the film. They are the main extras and my daughter Olive plays the anti-Redbox activist. They all go to Movie Madness [at Portland’s Hollywood Theatre] with me every week. 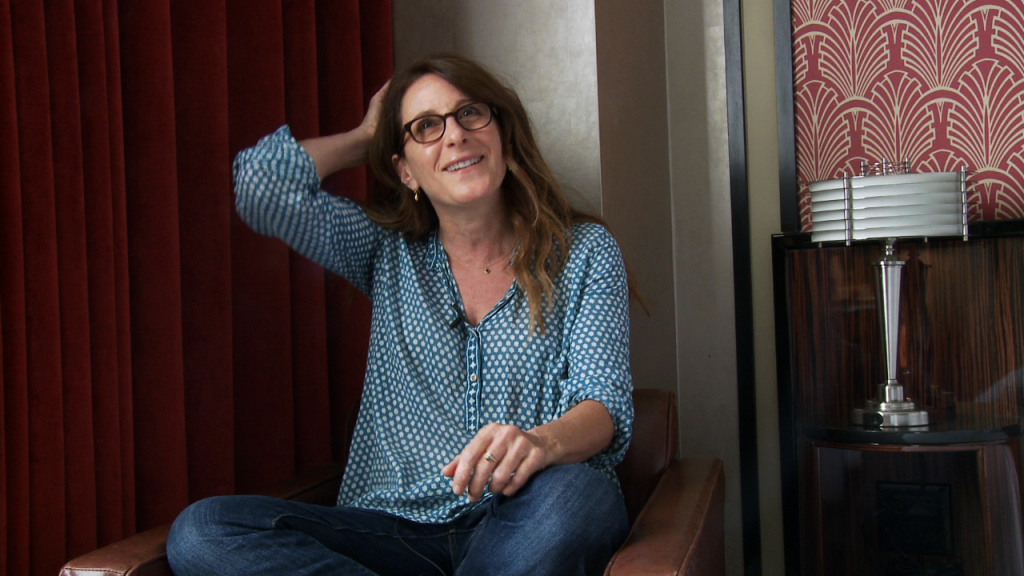 Did it shift multiple times? Did any intermediate iterations seem like you were almost there? After I cut the initial talking-head interviews together it wasn’t BORING, but just pretty normal. I would write a subject-appropriate song and film a little lo-fi music video for it, then throw that in. There was one cut where I narrated the whole thing, as if it was trying to be “Goodfellas” or something. That version was really awful. Inspired by Stacy Peralta’s Bones Brigade videos, which were pre-“Dogtown and Z-Boys”—scrappy movies that I grew up with—they usually included dumb little comedy sketches, songs written specifically for them, and so on. I even did a little mini-re-creation of my beloved First Stop getting taken over by Blockbuster.

In addition to having worked in nine different video stores in my life, I also have the dubious distinction of having directed Hollywood Video’s final training video, of which I use big sections in “At the Video Store.” Six months after the training video was shown to Hollywood Video employees, they went out of business—spectacularly!

So the movie was made up of scraps of all sorts of things. I’ve been filming for so long that I shot a lot of my own archival footage!

Did the scheduling of interviews have a lot to do with your extended production time? I know you were aiming to get John Waters for a while, your last get so the film was got. Not really. I am always trying to make a living with commercial projects while making my own stuff, until this one, always narrative films. “At the Video Store” is this movie that’s like a little art project in my basement that I kept poking at. Gave it up several times, once for almost an entire year. Ran out of money. Jumped back in when I would get an idea.

Danny Peary, the legendary writer of the “Cult Movies” books (and my favorite, “Guide for the Film Fanatic”) has a brother named Gerald Peary—you know this!—and Gerry got me John Waters’ email, which led to him—which led to Video Americain in Baltimore, where Waters filmed scenes for “Serial Mom.” Barry and Annie Solan of Video Americain are the heartbeat of this movie.

Bill Hader, I just called his agent once I found out that he used to frequent Alan’s Alley in Chelsea and they got right back to me. 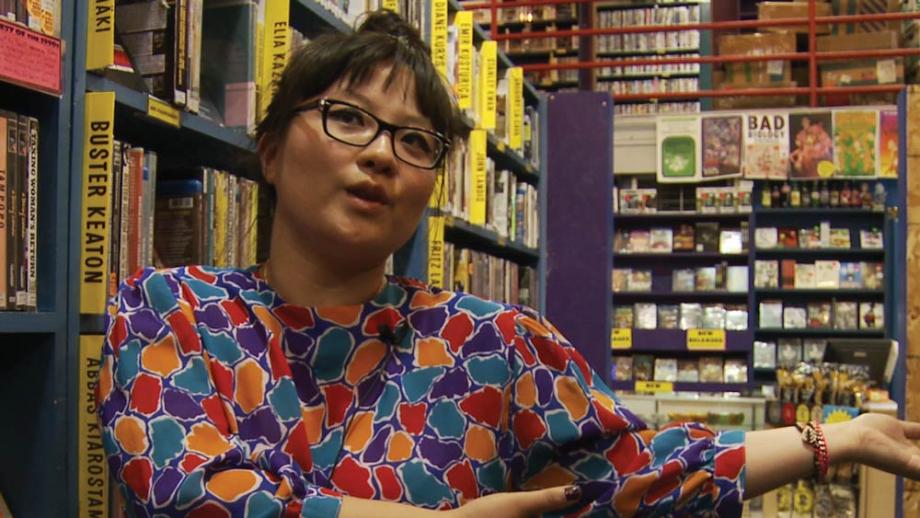 Did you learn something different in every location as opposed to every interview subject? Pretty much everyone in the film says streaming sucks and physical media rules. Those ideas are certainly represented here, but it became more about the nuances of the characters in the movie.

What is your favorite response by anyone in the film, well-known or not? Don’t know if it is my favorite, but the most memorable moment during a Q&A was when I showed the film to the entire Boston University Film andTV program at the end of 2019 and out of the 150 or so students in the audience, only ten or so had stepped foot in a video store. Many of the kids I spoke with afterward, though, claimed to really want the video store experience after having seen the movie. So I liked that part a whole lot.

Any special comments on Odd Obsession for the Chicago crowd? I know I only filmed at the old location, but Odd Obsession had the best smell of any store I can think of, that dusty old grandparents’ house smell. And such an artfully cluttered but wonderfully curated store. So many unique little signs and notes everywhere, not to mention the Ghanaian film posters and unique merchandise. As [founder] Brian Chankin says in the movie, “I don’t have a Cult Section because I feel like all my movies are cult movies.” Or something like that. I sure hope the current location has as good a smell.

“At the Video Store” plays Friday-Saturday, January 24-25 at Siskel. Newcity film editor Ray Pride conducts the Q&A after the Saturday showing. After that screening, Odd Obsession hosts an afterparty.