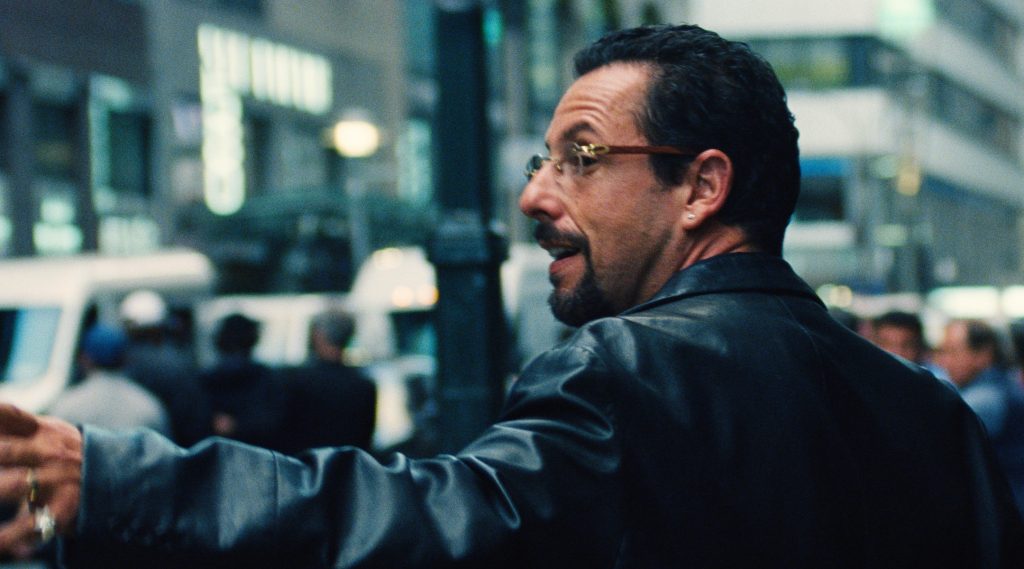 “Uncut Gems” contains an ideal role for Adam Sandler (naturalistic but wildly expressive) that is also, among so many other things, an ideal tribute to the late Jerry Lewis. Ten years in the concocting and confecting, Josh and Benny Safdie’s “Uncut Gems” is its own beast, nearly made many times over, including with Harvey Keitel, the result of over 150 drafts, by the Safdies’ witness, and it is also a dense conurbation of  the streets of New York City that they worship and the many movies that they love.

A24 had presumed it would make its mark on this year’s Oscars (broadcast Sunday, February 9) and scheduled an expansion to more theaters weeks into its run. The Safdie’s picture didn’t get a single nomination, but the rerelease for this weekend stayed in place, as well as its near-$50 million gross noted as the distributor’s highest-grossing movie to date. [Update: February 8’s Spirit Awards, chosen by voters of a different subset of the industry, chose the Safdies as directors; Ronald Bronstein and Benny Safdie as editors and Adam Sandler as best actor.]

It is a singular howl of manic compulsion as Howard piles implausible atop implausible dare, cheat and bet, built step by step upon each piece of work the brothers have completed since their early feature, “Daddy Longlegs” (2009). The movie’s 135 minutes are a worthy bolt of uninhibited yet highly refined mania that infuses and bursts cinematic influences not limited to Robert Altman’s “California Split,” the Coens’ “A Serious Man,” John Huston’s “Treasure of the Sierra Madre,” James Toback’s “Fingers,” Karel Reisz’s “The Gambler” (written by Toback, based on his own conniptions with addiction), Martin Scorsese’s “Mean Streets,” Ulu Grosbard’s “Straight Time,” William Friedkin’s “The Exorcist” and man-at-the-end-of-the world “Sorcerer” and Stanley Kubrick’s man-at-the-end-of-the-universe “2001: A Space Odyssey.” And yet, in an interview with critic Matt Zoller Seitz in the film’s press kit, Josh says, “’2001,’ arguably one of the greatest movies ever made, was weirdly very inspiring in making this movie—the concept of the universe existing in each of us. We are actually the aliens. We are all these vessels for human wonder. We are all these individual monoliths. We all have these crazy stories to tell.” The Safdies’ well-documented love of New York street life is key as well: each and every face in each and every frame! It is a feat of romantic empathy.

Howard Ratner is a jeweler in Midtown Manhattan’s Diamond District. In his early fifties, he deals and gambles, he lies and spiels, he gambles everything that makes his life worth living each and every day. There is beauty in the fathomless ugliness that keeps him alive, Shakespearean drive in skunky places. As his heart pounds, the sound design alternates between busyness and isolation, and as with “Uncut Gems,” Daniel Lopatin’s score is manic melodic mayhem, sardonic and surrealist and emphatic and empathetic, even astral, in a catch-and-release run of hooks and grooves and sonic digression.

Admiring the role (and Sandler’s consummate performance), writer-director Paul Schrader commented on Howard’s resemblance to a notorious film industry figure, with “his nonstop jittery talk, his sexual compulsiveness, his gambling addictions, his Jewishness, his boasting… his incessant hustling.” Schrader also has Howard Ratner to lights: a manic compartmentalizer in middle age who is a different man to his family, his employees, his customers… to anyone he knows. He wants to please. He wants to be pleased. He’s a gambler, each breath in, each breath out. 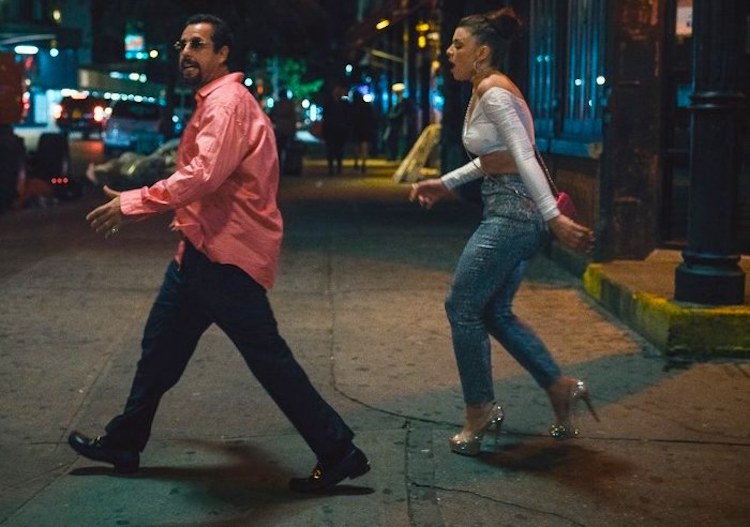 “Nobody’s beneath him,” Josh Safdie says of Howard the day after a Chicago screening where the audience was pummeled into grateful submission, and some watchers into mortal awe. “Nobody’s above him. To him, everyone’s at the same place, and he’s able to inspire that kind of impossible thinking among other people. There’s real mysticism in capitalism.”

Uncut Gems, first lines of the end titles track: “I still believe in your eyes / I just don’t care what you’ve done in your life”

Hustlers. Fuck-ups. People who overreach, compulsives, gamblers, addicts. I loved it because it’s not afraid of ugliness, and of loving it. pic.twitter.com/WIfOfAD0J8