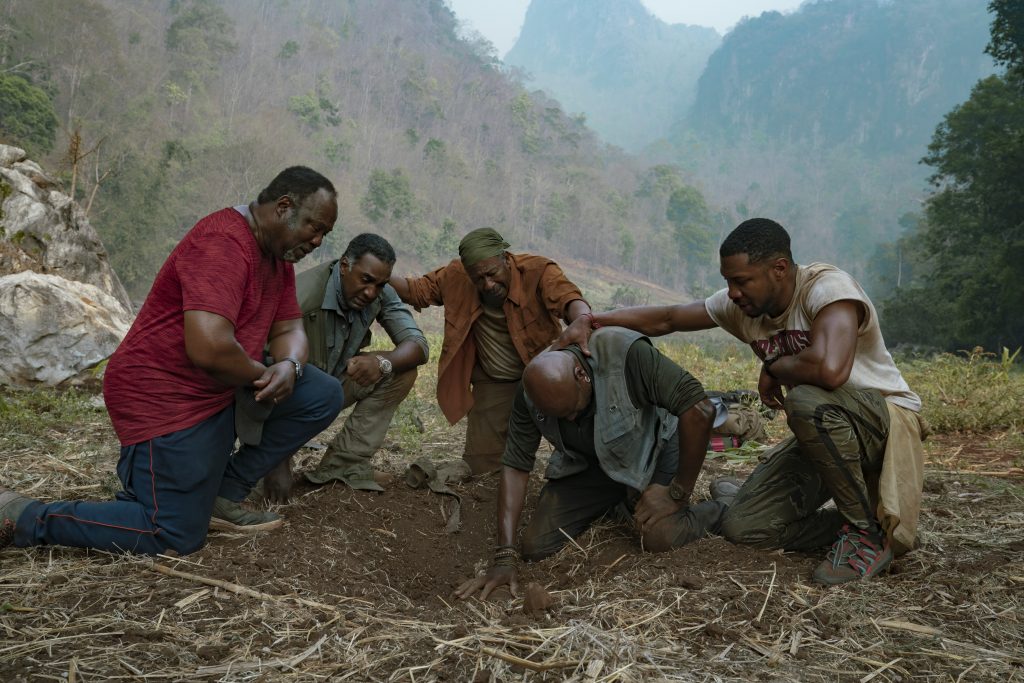 Across 154 minutes, parceled for duration and patience and emotional weft and heft, Lee hangs his concerns about right here, right now, the right things, on the scaffolding of a decades-delayed heist caper: a kicking cousin of John Huston’s “Treasure of the Sierra Madre” that also functions as a ruminative bucket list for its characters and a river of riveting, righteous polemic. Four African-American veterans, soldiers from the Big Red One, the 1st Infantry Division—Paul (Delroy Lindo), Otis (Clarke Peters), Eddie (Norm Lewis), and Melvin (Isiah Whitlock, Jr.) return to Vietnam, ostensibly searching for the remains of their squad leader (Chadwick Boseman) but in fact hoping to unearth bars of gold they’d left behind eons before. “No disrespect to any film that’s been done before about the Vietnam War,” Spike Lee says in the film’s press notes, “but we wanted to do this through the perspective of the Black soldiers. [Co-screenwriter] Kevin [Willmott] and I felt that the premise was fantastic. We knew that we had not seen brothers like this in a Vietnam film.”

Among the large cast, Delroy Lindo’s performance is nonpareil, seething greatness, from the micro to madness: he plays a PTSD-shaken MAGA man, red hat and all, walking and talking his nightmares without apology and with riveting ferocity. 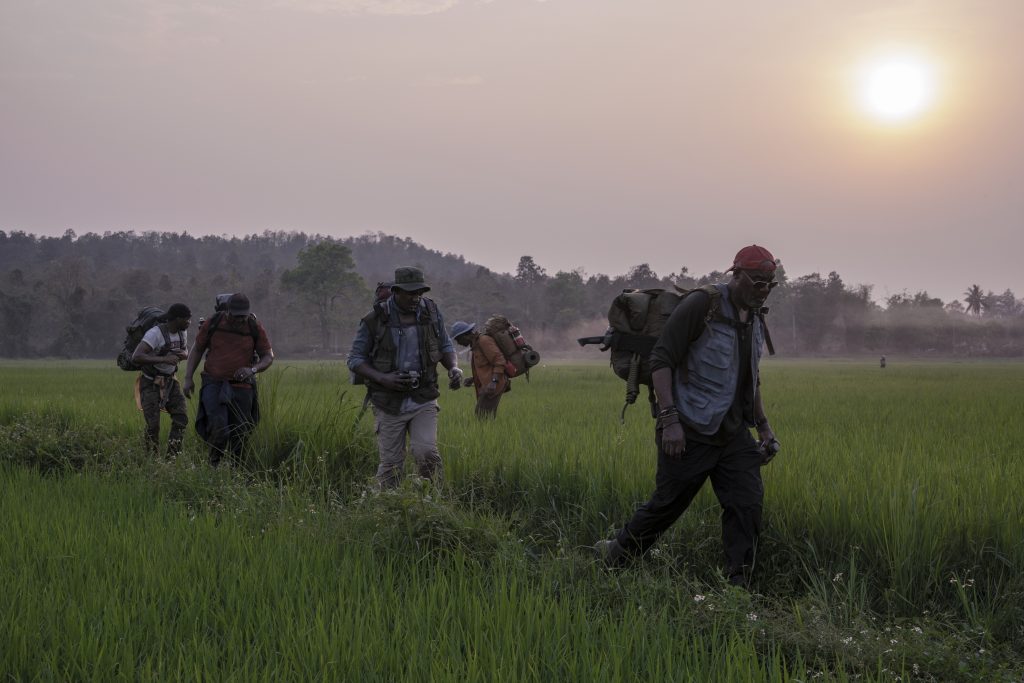 The eclectic, fluent montage is relentless, a kaleidoscopic attribute of many Lee films, but especially vital after the news footage that ends “BlackKklansman.” When Lee inserts explosive bits of historical material, he provides the dates and, most empathically, the names of victims, whether those murdered at Kent State, or the on-camera killings of Viet Cong. (Lee’s alternation of color footage and a black-and-white still by Eddie Adams of the 1968 point-blank assassination of Nguyen Van Lem by a brigadier general is sudden and icy.) Footage of Angela Davis from 1969—“If the link-up is not made between what’s happening in Vietnam and here, we may very well face a period of full-blown fascism very soon”—resounds a little bit later when a character casually observes, “Negroes better wake the fuck up with the quickness, man.” When the prospect of great riches gleams in front of them, another character stops the action to note “We ain’t ripping off shit… We was the very first people who died for this red, white and blue,” describing the death of Crispus Attucks in the 1770 Boston Massacre. (The site of his death was occupied this week by National Guardsmen.) The rationale extends to “We repossess this gold for every single black boot that never made it home.”

Both welter and wonderment, the arsenal of filmmaking techniques crackles and pops. Lee’s keenest forebear is Spike Lee himself—oh, the verbiage, a plethora, a pulchritude of “motherfuckers”—but there’s the scent of unabashed kino-fist Sam Fuller raised exponentially: what could be crude exposition is instead hortatory, confrontational, righteous, raw, randy. There’s a hint of Jonathan Demme’s control of emotional notes, as well as the fragmented consciousness of the most driven of Oliver Stone’s movies. (The flashbacks contain a magnificent coup de theatre that is the opposite of Martin Scorsese’s de-aging in “The Irishman”; strange at first, it becomes thrilling as but a single character, dead now decades, retains eternal youth.)

Trump gets punches, “the Klansman in the Oval Office”; “President Fake Bone Spurs”: characters speak openly and freely without the baggage of layers of studio executive notes. “War is about money. Money is about war,” a man holding a gun enunciates. “Every time I walk out my front door, I see cops patrolling my neighborhood like it’s some police state. I can feel just how much I ain’t worth.” That was then. This is now. This is now. What a raucous, bittersweet, glorious, unforgiving film. (The soundtrack features six songs from Marvin Gaye’s “What’s Going On” album; the Spotify playlist includes the score by Terence Blanchard and commentary by Lee.) 154m. (Ray Pride)