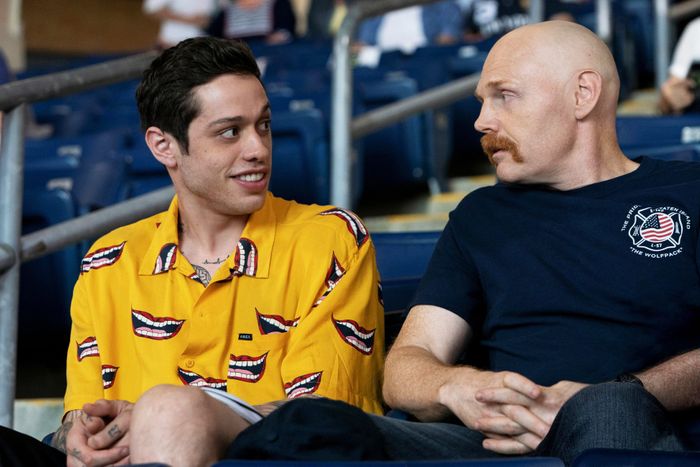 The life of comedian Pete Davidson inspired Scott, the twenty-four-year-old, living-at-home, self-destructive, long-grieving, mentally and emotionally unbalanced man-child protagonist of Judd Apatow’s punishingly long and tonally erratic “The King of Staten Island.” It’s been seventeen years since the death of his beloved fireman father on the job (parallel to how Davidson lost his own). “There’s something wrong mentally, I’m not all right up there” is his heartfelt excuse to get out of a formal relationship with the childhood friend he’s fucking. “I’m scared of myself.”

Talk of depression and anti-depressants and staying stoned is out in the open: “That’s why I smoke weed all the time, it slows it all down,” he says, describing the movie’s slowed pace that suits his inertia and indolence (not to be mistaken for tenderness). He’s too doped and dopey to succeed as an antihero; he’s one of the least detailed of Apatow’s roster of slacker dumbfucks. (But when he tosses off a response to “You‘ve been smoking too much [mimes inhaling]” with an offhand “I think I’m just stupid,” you hope-hope-hope, you hope against hope for goodness and even greatness.)

Davidson’s squirmy performance style suggests the unlikely prospect of an unlikable Steve Buscemi playing the Joker. (Lingering shots of a torso madly splattered with tattoos is troubling, too.) There are piercing conversational throwaways that serve as insight and as rimshot: “I don’t see the problem with sitting in the corner, okay, There’s some people that go to the party and dance and there’s some people that sit in the corner, I’m the corner guy … but your brother” is a standout. The vitality of “King of Staten Island” comes from the actors Davidson is surrounded by, including Marisa Tomei in aviators as his frustrated mother and widow of his father; Bill Burr, Pamela Adlon, Bel Powley, Kevin Corrigan, Maude Apatow and Steve Buscemi. It may not sing, but it zings when it zings. (Tomei and Burr have excellent chemistry as a pair of humans brushing up against each other in the middle of their lives.)

Apatow’s ambitions have heft (and lush, syncopated profanities and obscenities), in personal and societal observation and in self-excoriating performance, light years beyond the brutal madcap of “Cable Guy” (which he produced in 1996) and “Freaks & Geeks” (produced 1999-2000). Detailed depictions of working-class communities come along too seldom. Apatow atomizes the bond and banter between groups of friends approaching sex, nearing forty or just at the end of their rope. Andrew Sarris anatomized a class of classical Hollywood directors in 1968’s “American Cinema” under the rubric “Strained Seriousness.” Those seriousness people included John Frankenheimer, Stanley Kubrick and Sidney Lumet, but it’s not hard to see the genuine heart of Apatow’s less-than-attained movies falling into that sorting bin. I sit through a movie with this jumble of elements and I want the shit to be great. When it’s not… it’s painful. The climax of the film includes an act of physical scarring that is unspeakable, attesting to Scott’s terrifying mental illness. The bit is nervy and nauseating. Yet the community survives, trauma and all. 137m. (Ray Pride)