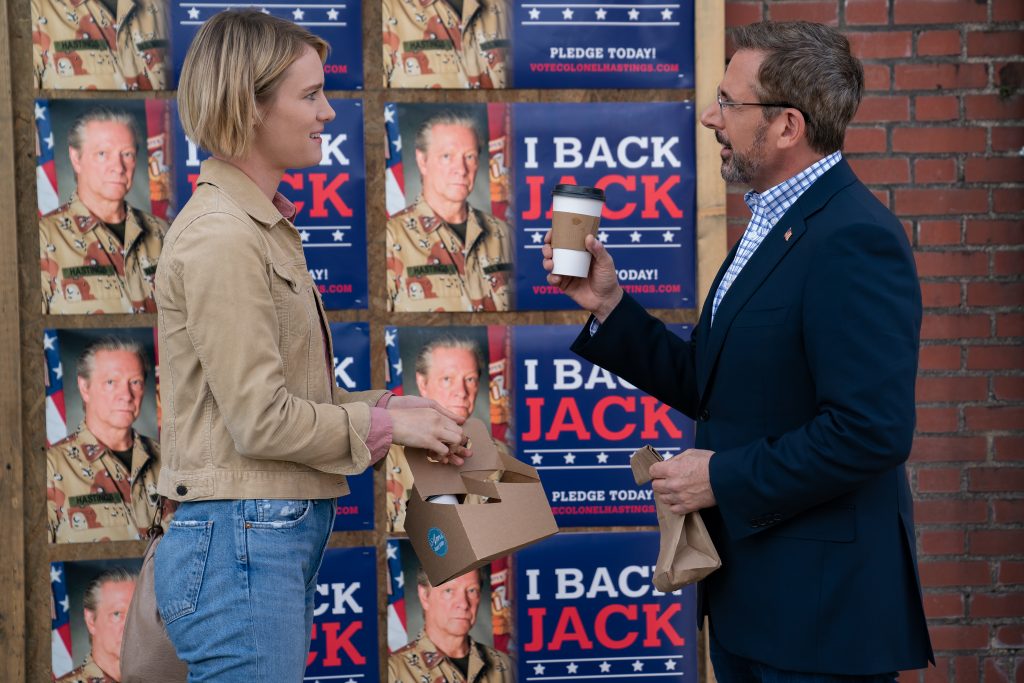 “Irresistible” could be considered a disappointment if anyone had expectations for Jon Stewart’s sad sophomore outing as a feature writer-director. There will doubtless never be another such toothless film with “RESIST” smack-dab in the middle of its miserable title. Stewart’s audition for the New York Times opinion pages of the James Bennet era is a comedy about a political consultant descending on a fictional small town in Wisconsin to redeem himself (or his business) after his 2016 electoral catastrophes.

Describing the genesis of his glib picture in an earnest conversation published in, yes, the New York Times, Stewart plucked out notorious, ancient Democratic establishment loser Bob Shrum and “these guys who are viewed as the consiglieres of their parties. These older white guys who have failed almost at every turn and are still brought in as the old wise man. ‘Tell me, when you were with Dukakis, how’d you come up with that brilliant tank photo idea?’ Those guys are always wrong! But that whole system has its own mass and momentum and has very little to do with its reputed purpose, which is to serve the public good. So the idea was to satirize that, to get people to step back and go, ‘Participation in this corrupt system is inherently a corrupting process.’” (For more on the baleful Shrum, soak Jeffrey Toobin’s 2007 New Yorker takeout, “The Shrum Curse.”)

But you know what? That passage is the film in a thumbnail! And the movie inflates those few stab-stabs into 101 minutes of screen time. A single line from “Irresistible,” “You make millions funneling tens of millions into this election economy” is more succinct still. 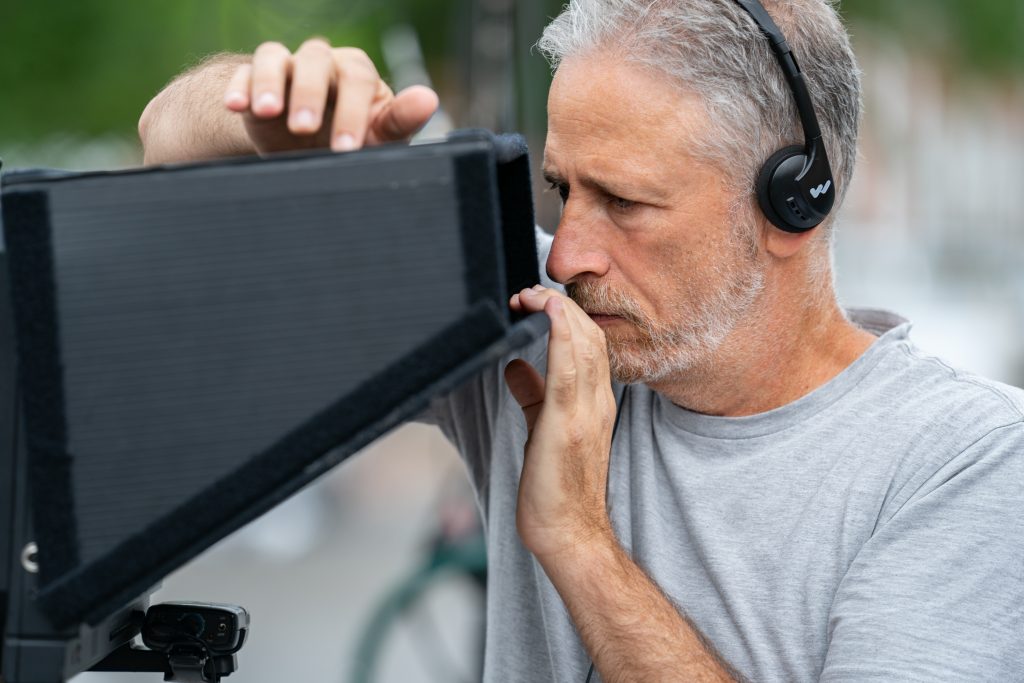 Arriving from D. C. in smalltown Deerlaken, Wisconsin, which title cards declare as “RURAL AMERICA, HEARTLAND, USA,” consultant and all-round wheezing weasel Gary Zimmer is in search of a Marine veteran who made a speech at the city council—“The Corps taught me that a chain is only as strong as its strongest link”—that is posted on YouTube to internet acclamation. (“Hero Marine stands up for Immigrants” is the video caption.) The great and ever-salubrious Chris Cooper plays Colonel Hastings as a damp if sullen squib who intermittently flashes his eyes to indicate signs of life. Zimmer wants to draw the man he takes for a naïve veteran into his electoral orbit for the upcoming mayoral election. “This square-jawed paragon of Americana is our goddam key back into Forbidden City… A man who makes Joe the Plumber look like Dukakis in mom jeans and an Easter bonnet, in the reddest of counties in the great now-swing state of Wisconsin, is a Democrat!” Zimmer exults to his unimpressed young staff. (Hastings is characterized as more than a country bumpkin in a passage of him driving his pickup truck and listening to “Rhinestone Cowboy” as we glimpse boarded-up storefronts, then switching to an episode of “Fresh Air” with Terry Gross and a guest discussing sexual content in show tunes.)

Zimmer, played by Steve Carell in full go-fuck-yourself-I’m-a-shithead-did-I-already-say-fuck-you?-Well-fuck-you mode, is matched by Hastings’ daughter, Diana, introduced with her arm up the backside of a cow. (Diana is played by Mackenzie Davis in the short hair and striped shirts of a 1980s Mary Stuart Masterson character, reducing the lithe, pansexual fury she displayed in “Terminator: Dark Fate” to the quizzical expressions of a house cat.) Consultant Faith Brewster (Rose Byrne with blonde tincture and the rotten costume changes of Kellyanne Conway) drops into town for the incumbent mayor. The pair’s filth-lite banter hails distantly toward the coupling of Republican Mary Matalin and Democrat James “Snakehead” Carville. “You know how I knew you were here?” Brewster says up in Zimmer’s face in a local café window, a diner for schmucks. “Your pussy tingled.” Replies Zimmer, “You are a twisted fuck, Faith, and you don’t know Jack.” “It’s good to see you. You look fat,” she says in parting, then licks his upper lip and all up his face. (I fucking love “You are a twisted fuck, Faith.”)

There’s less culture-clash substance in this fish-into-water tall tale than in Kevin Costner’s “Swing Vote” (2008), or Jay Roach’s political assays for HBO, or the clutch of crisp, if innocuous movies that Alan Alda made for a brief burst in the late 1970s. (There are also meretricious variations on Bill Forsyth’s “Local Hero” (1983), which admirers of that masterpiece may well rue.) Stewart provides too much explanation for the average viewer and little insight for anyone who pays a flicker of attention to the wreck of electoral politics. It’s much more demure “Shouts and Murmurs” than the RIOTOUS POLITICAL COMEDY it may have been intended as. “I was just being witty and cynical,” Zimmer says, no self-awareness, as the quips motor away, not even at the level of the surface scratchings of the New Yorker’s foul pundit A*dy [email protected]@w*tz. Zimmer busies himself with condescension to the peculiar locals—is this how Stewart sees small towns or is something more textual, more subtextual afoot?—percolating Clinton-style triangulating horseshit, but with a dash of modern psyche-slivering campaign tricks.

Handed little blue cards with a speech for his campaign announcement, Hastings murmurs, “Wow… I quote Patton… and Jesus” as Zimmer stabs a flag pin to his lapel. “Can’t go to the prom without a corsage!” Zimmer also bursts out in dated pop culture references, including “Bueller…,” “Attica, Attica!” and the de rigueur “I’m mad as hell and I’m not going to take it anymore!” (Who’s speaking? A 1970s-style god’s homely man like Bob Shrum or Jon Stewart through his stick figures?)

Bobby Bukowski’s camera moves around static settings now and again to suggest narrative momentum. The score, credited to Bryce Dessner of The National, is dreadful, with plinking gee-tar and gee-whiz solo piano draped across dead spots. (Please stop him. Smash his fingers, smash his hands.)

A fundraising scene in a rich couple’s New York City mansion, which is called “an inciting incident” in books that anatomize screenwriting, haplessly echoes Tom Wolfe’s 1970 “Radical Chic & Mau-Mauing the Flak Catchers,” with dubbed-in off-screen dialogue tacking toward “Tom Friedman had a great line” and variations on, “The man is literally evil.” Then there’s the Colonel’s own cod-Jimmy Stewart speech: “Sometimes we get comfortable in our little ideological huddles… And we forget to reach out.” Afterwards, Zimmer touts Hastings as “the real deal, it is like a Bill Clinton with impulse control, like a churchgoing Bernie Sanders with better bone density.” That’s one of Stewart’s better teleprompter-cue card-style cut-ups (which tip toward Dennis Miller-style overload). These aren’t jokes, they’re aggravated tweets. With Topher Grace, Natasha Lyonne. 101m. (Ray Pride)