“Good morning! It’s June 16, 2020, and it’s a Tuesday. Here in L.A., thick gray clouds. Very gloomy. No wind. Sixty-three degrees Fahrenheit right now, around seventeen Celsius. All this should burn off by around ten and we should have golden sunshine and the high around seventy-five degrees, twenty-four Celsius, Have a great day—everyone!”

Seventy-four-year-old David Lynch, wizened in quarantine, returns to a stir-crazy daily routine from a decade ago, a terse weather report from a horizon he’s lived with for decades, one that seldom disappoints in its sameness. Reporting from the workshop building of the compound he designed and built before “Lost Highway,” in which it was a location, Lynch smokes and rasps against morning haze with statements of sameness and agreeable positivity. He’s working wood and catching the big fish.

Meanwhile, elsewhere, outside, beyond the fortress, outside of isolation, catastrophe mounts.

Which catastrophe? Which plague? Pick a plague, pick any plague. I will now leave out so many. I started on the back of some index cards, keep it simple, make it stark, what challenges are there for the movie industry, not the ragged rattling of the entire American enterprise, let’s stay to just the big machine that’s choked and stopped, the system of making movies, showing movies, proffering parable and allegory and wish fulfillment, improving on representation, increasing diversity, but all the while getting lost in the intangible specifics of vast, reflected dreams?

Make your own succession of thousand-word lists, the end of the world as we know it in a succession of threaded tweets. This world tears a deck of index cards into shreds, drains Sharpie after Sharpie.

Have the movies returned with a vengeance since I wrote this? The smell of popcorn instead of war-crime tear gas? The soft whir of projector exhaust instead of burglar alarms across the way? Christopher Nolan’s palindromic 7/17 release date for “Tenet” moved to the thirty-first, and may move farther in the hours to come. (The trailers model a protagonist who makes leaps through time wearing an oxygen mask, as well as an immense theater undergoing what could well be the 2002 terror attack on Moscow’s Dubrovka Theatre in which at least 170 people were killed.) Could a movie inhaled by a mass audience in IMAX, 70mm and 35mm take minds off pandemic, the invisible agent of social control? From streets insurgent with mass protest after barefaced, unashamed on-camera murders by police? Curfewed blocks after attacks on property? Police unions that denounce the citizenry their members are sworn to serve? The sky-high geysering of centuries of anger?

Release doesn’t mean loss of control, abandonment of focus. Where is Dionysian release?  Sport and music and theater and movies, which require the assembly of celebratory strangers: defunct? Can any of that “phase four” be revisited or reinvented, let alone restored?

Will there be drive-ins under the cold, cold stars, in fields near the city and in urban parking lots on the hot, humid nights of August? Will all y’all repose in a “high-touch”-proofed environment with individually wrapped eats and garnishes, steeled, crouched six or eight feet away in the dark from our masked fellows?

How do we rest the eyes from death-scrolling, doom-scrolling, mind drooling through digital windows onto what’s outside and how circumstance is readily exploited by forces malign? Movies? Films? Perhaps?

So many lists, fevered and fanciful ones about movies by theme and history and righteousness, of concentration and of diversion, so many more lists than we’ve already blinked at over the past decade. 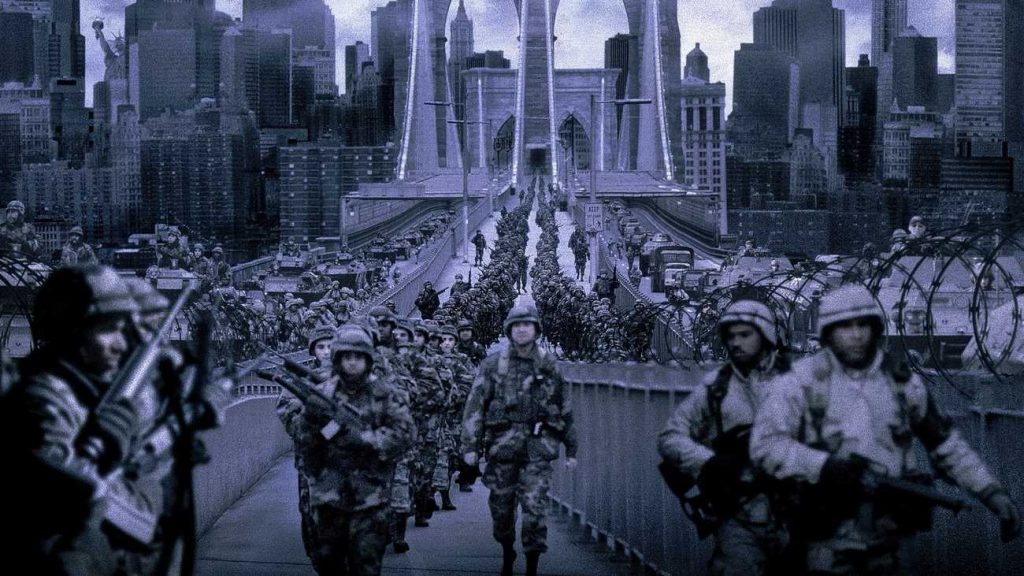 Lean back and remember, a kaleidoscope of imagery turns and turns again, the unthinkable of social breakdown, the shot-countershot of cautiously envisioned apocalypse peopled with B-story personal drama: the military man who populates the horizon of Manhattan with armed vehicles, then fills the bridges and the memorable one-sheet of 1998’s “The Siege” (three years before 9/11)? There’s a Trumpian vista there, writ small in Lafayette Square as soldiers were dispatched to gas peaceful protestors to clear the way for an inept photo op with the President holding a Bible, handed him by his daughter, as if it were a rat on a string. There were no words, no sound effects, no music, just botched theater. Bruce Willis’ bad man was brighter.

Revolution from the streets instead of against the streets? Gillo Pontecorvo’s 1966 “Battle of Algiers” with back streets alight to a martial beat. Or “Miracle Mile” (1988), as nuclear devastation approaches a star-crossed couple, as crisp as diamonds, as lost as love. There is chaos on the street and then the rocket, the sky. The stars look down.

None of these fragrant, manufactured memories are what I saw today. Yesterday. Every day. The new everyday. We’re all on saber edge: watching, but what do we see? How much dare we search out and hope to see? What is going on out there? What is going on in here?

Nothing’s going to happen in the garden of Zoom to match “Look out, Haskell! It’s real!” from Haskell Wexler’s 1969 metafiction “Medium Cool,” shot in the summer of 1968 against a backdrop of the Democratic Convention. We could summon fact from documentaries like Ava DuVernay’s “13th,” and Raoul Peck’s “I Am Not Your Negro,” pungent chronicles of what’s gone wrong so long.

Today, what’s out there is so real, you won’t believe your eyes. It’s past the middle of the month and past midnight as I type, and on Twitter, correspondents have lost track of the count of the hanging deaths of young Black men from the past two weeks—is it six? Is it seven?

Brute Steve Bannon (once a distributor of high-end art movies and later a shabby, failed maker of filmed essays) counseled Donald Trump to “flood the zone with shit”: when things are going bad, that’s good, pitch in a terror or two to make a sated or stunned nation forget the day before, even the morning it woke to.

Can mayhem and madness and malice be reduced to simple narratives that reassure (or perhaps reinforce) in the form of serial entertainment or feature films? Narrative is atomized in an endless cycle of news bulletins. What form of story can bring meaning together, to stitch sensation to reason?

There is one story that divines the fate of the smaller stories, the character of collapse or the dream of rebuilding: in a little over 120 days, we will face the greatest fear of those who would bring wickedness down on us all. That story begins Tuesday, November 3 and will resound (but not resolve) when the final votes are tabulated a few days or weeks later.

Very gloomy! Have a great day—everyone!