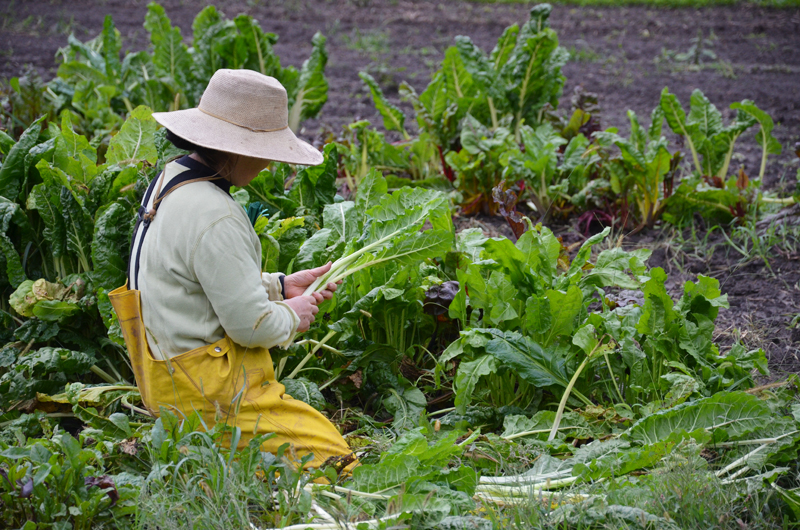 Ines Sommer’s wistful yet pungent “Seasons of Change on Henry’s Farm” took six years to observe and array yet arrives at a moment, mid-pandemic, post-derecho, right in our laps, right in the farmers market. “Food is fundamental” is a key phrase as we consider what lies ahead for sustaining not only agriculture but also our now-hiccupping supply chains locally and at scale.

Henry and Hiroko Brockman have maintained Henry’s Farm, a biodiverse family enterprise, for over twenty-five years in idyllic-seeming Congerville, Illinois. The farm yields 650 varieties of organic vegetables each year. Henry knows the soil, the plants, the microclimate of his work. The Brockmans consider the sustainability of the farm while taking a year’s sabbatical in Hiroko’s native Japan, leaving their former apprentices in charge. A lot of unexpected changes happen, though, including severe weather that strikes the land and the crops. The Brockman’s system is shaken.

Are there any elemental shifts across six years of production that occur to you? Did you start with the larger theme, and look for a farm and farmers? What did you discover that set the film toward the narrative we see now at this rigorous feature length?

I entered this project sideways. One of Henry’s former volunteers proposed a five-to-ten minute short about Henry’s farm. I agreed to do it because of my longstanding interest in urban ag and organic farming and it seemed like a fun short doc to make… Ha! I truly took this project into a completely different direction and time dimension!

When I started filming, the setting was more beautiful than I expected and I was struck by seeing Henry walk the fields with his notebook in hand, always writing things down. His approach to farming seemed to beautifully combine science (data collection) and art and that intrigued me.

So I thought if I film just a bit longer, I’ll find out more about this approach and then some of the themes of the film started to bubble up via observation: the intense physical labor involved in farming; the rewards of working with nature; the deep knowledge that’s required; generational farming as it’s expressed through Henry’s kids and the interns (who all have liberal arts degrees—something I didn’t expect); the almost spiritual aspect of the work that both Henry and his daughter Aozora describe; and more. And as an immigrant to the U.S. myself, I also identified with Hiroko as never feeling entirely part of the culture here, and I treasured our chats in her kitchen.

When Henry decided to take a sabbatical early on in my filming at the farm, that completely surprised and intrigued me and I decided to follow where the story wanted to go. It is one of the great joys of unscripted, noncommercial documentary making to allow yourself the freedom to improvise and not just follow a predetermined script or message. Each turn in the story posed new challenges in editing and especially the pivot to honestly acknowledge the impact of climate change was challenging to depict. But this is where Henry’s thinking and approach to farming went and I wanted to acknowledge that truthfully and not end up with a romanticized and sanitized look at organic farming that ignores that even if a farmer does everything right, there’s no escaping the world and global challenges all around us. 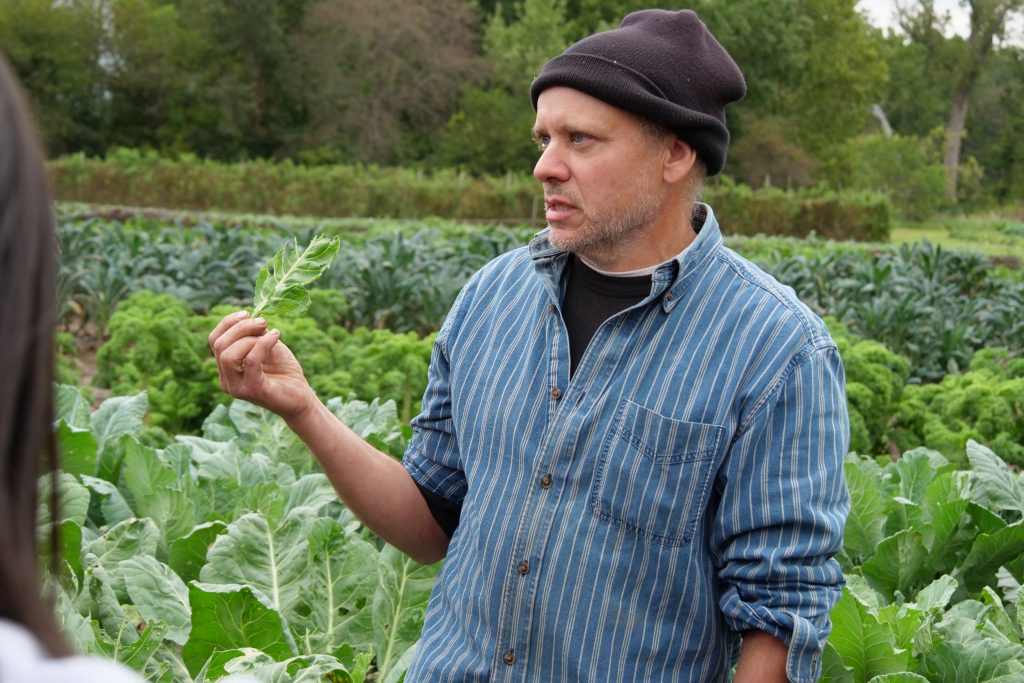 A lot of coverage of art right now is, of course, caught up in the moment, but without any longer view. But there’s a whole set of quandaries looking at “Seasons of Change,” some about the longitude of documentary shooting and editing, with the extra layer of the film about the family’s work also being about duration and the long-tail pursuit of sustainable farming as climate change starts to wreak havoc small and large.

Your question prompts me to think about the relevancy of work that takes longer to complete, which often ties in with financial resources. If I didn’t have to work a day job or have small, intermittent funding support, I could release films a lot more quickly and react to current circumstances. Long-format work that’s more durational in nature therefore has to include aspects that make it relevant beyond the next news cycle. It’s challenging to get that timing right.

As a veteran observer and participant, what insights do you have with your feature on the sustainability of documentary production and distribution? Or are you taking bumps in the road as they come?

There are recent studies about the sustainability of documentary careers and if I recall correctly, only twenty percent of doc filmmakers can make a living from this work. Docs that focus more on entertainment value, celebrities and true crime do much better financially. While a lot more viewers seek out docs on streaming platforms than in the past, it’s a limited buffet in terms of topics, approaches and styles. There are certainly exceptions in terms of high-caliber, artful docs finding recognition and exposure (such as “American Factory”), but for indie docs that are less conventional, it’s a different story, because the way we can earn some money back through distribution is very limited. If we go for a food or restaurant analogy, it’s comparing fast-food chains to a small neighborhood restaurant.

Did you have a distribution plan beyond Siskel set before things changed?

I’ve chosen a somewhat unorthodox approach to presenting the film so far. Before our upcoming Chicago screening at the Gene Siskel and while the film is still playing festivals, we did some sneak previews in Illinois communities outside the Chicago area, which included Springfield, Bloomington-Normal, Eureka, and a super-fun outdoor screening on the farm itself. That was a highlight! It involved me setting up a projector and speakers and projecting on to the door of the big packing shed that we see in the film. The “screen” (the door) was about five feet away from where some of the opening shots of the film were recorded. It was one of the weirdest perceptual loops I’ve ever encountered as a filmmaker to have the site of filming and showing the work overlap in this way. There was an audience of about a hundred, all seated on folding chairs and straw bales.

Before the pandemic hit, we had booked an Illinois screening tour and are now working on moving some of those events online. This ties in with my interest in community-based events that create a more participatory public space for people to gather, experience a film together, and have a discussion not just with the filmmaker, but also with each other. I enjoy showing my work in festivals and theaters, but I also want other, alternative forms of presentation and exhibition and audience engagement to flourish.

In terms of distribution that goes beyond this very DIY approach of mine, I think the film will do well in educational distribution, but I haven’t had a chance to reach out to distributors yet. The reality is that doc filmmakers who work on the margins like myself typically have other day jobs, so that always creates time conflicts and limits the scope of what I can pursue.

Sometimes a film or its making is described as “teachable”—in that there’s something hiding just beneath, or gratefully put aside out of frame by its makers. Rather than what another filmmaker might learn from your experience, what did you learn to do differently?

Working on this film has solidified some of my personal preferences when it comes to the filmmaking process. I’ve directed many commissioned projects and have also worked on other filmmakers’ projects that require clear messaging, what the story will be about, and just the right casting of doc subjects as “characters.” This is a fine and productive approach to doc filmmaking.

I can work well in that mode, but when I pursue a personal doc project that relies heavily on my own free time and labor, I am allowing myself more freedom: I tend to follow where the story leads; I’m open to shifts in the participants’ thinking and decision-making to avoid reducing them to “characters”; and I embrace learning things that contradict what I first thought about a situation, leading me to a deeper and often surprising understanding of a situation.

I also treasure having creative collaborators: my co-producer Terra Brockman is not only Henry’s sister and founded a non-profit supporting organic farming, but she’s a wonderful writer whose book “Seasons on Henry’s Farm” sold me on making the short doc in the beginning. And working with gifted doc editors like Melissa Sterne and Liz Kaar who can help a director find the right moments in the observational material to tell the story are crucial.

Have you become a small-scale expert on sustainable farming and production and food supply chains? What sort of movie might someone else make that would encompass what you’ve observed or considered or learned but could never fit into a compelling narrative?

Biggest benefit: working on this film inspired me to grow my own vegetables!

The experience also highlighted how detached we are as consumers from understanding how our food grows. There was a lovely moment in the rough cut that we had to cut where Kazami, Henry and Hiroko’s youngest son, recalls with laughter how his college roommates were freaked out by seeing traces of soil on store-bought celery. He responded by saying: where do they think the celery lives in? This anecdote showed so clearly how our connection to growing food has been distorted and interrupted. Probably three plus generations ago, most of us would have had some family connection to farming in one way or another. It would be great to see a character-driven, engaging doc about that gap because the fragility of our food system during the pandemic has only become more evident. I have lots more ideas when it comes to films about agriculture and rural topics that I can imagine pursuing, but I’ll keep those to myself for now.

“Story,” of course, evolves. And so did the climate! With the evidence and shifting factors of climate change right there before your eyes, and under their hand, how have you, as someone who’s been at this trade for a while, how did “Henry’s Farm” change you?

The fragility of our food systems is much more apparent to me now than it was when I started making the film.

“Seasons of Change on Henry’s Farm” starts streaming Friday, August 14 via “Film Center from Your Sofa,” with a Q&A with Sommer, Brockman and co-producer Terra Brockman, moderated by filmmaker Kyle Henry, on Sunday, August 16 at 5pm. Details here.