An elegy to the brimming life of a long-lost friend, Werner Herzog’s “Nomad: In the Footsteps of Bruce Chatwin” is comprised of eight chapters of circumlocution and circumnavigation, visiting serenely composed landscapes where the British writer found inspiration. Herzog has portrayed platonic bonds between men before, notably in “My Best Fiend,” his depiction of how he and his onscreen alter ego Klaus Kinski drove each other to madness and beyond, but there is tenderness, even wistfulness to his remembrances of the elegant, handsome polymath who died over three decades ago. He refers to his friend several ways, but most often, “Bruce Chatwin”: “Bruce Chatwin was searching for strangeness.” Herzog himself searches for journeys, especially by explorers, and in particular, explorers who see the world and confront it with bold, fearless passion. He and Chatwin were destined to meet.

“Chatwin was a writer like no other,” Herzog narrates. “He would craft mythical tales into voyages of the mind. In this respect, we found out we were kindred spirits; he, as a writer, I, as a filmmaker.” He sets off on his wan “erratic quest” to find similar “wild characters, strange dreamers and big ideas about the nature of human existence.” When he knew he was dying, Chatwin summoned Herzog, offering him the gift of the fine, brown leather rucksack that had accompanied him on all of his travels. (Another sturdy good that Chatwin’s name is attached to is the Moleskine notebook, of which he filled scads.)

Both men’s imaginations bloomed on walkabouts in unusual or unsung landscapes, each restless and peripatetic. Both have sought what the filmmaker has famously called “ecstatic truth.” In one of his handful of prose works, “Of Walking In Ice,” Herzog kept a diary of a three-week walk he took from Munich to Paris on a pilgrimage to his friend, the film historian Lotte Eisner, who was very ill. (Herzog believed that only his journey could save her.) The entries in that small volume teem with the kind of ineffable sincerity, cosmic intensity and reckless awe of Herzog’s voiceovers to his documentaries. “I took a jacket, a compass, and a duffel bag with the necessities. My boots were so solid and new that I had confidence in them. I set off on the most direct route to Paris, in full faith, believing that she would stay alive if I came on foot. Besides, I wanted to be alone with myself,” Herzog wrote.

In “Nomad,” a documentary crew, of course, accompanies Herzog yet he is not alone while seeking fragments of his friend’s consciousness. Except for small turns of phrase, Herzog is a keeper of the flame of Chatwin’s voice in “Nomad,” even as he provides but a handful of glimpses of the man himself. The filmmaker makes no attempt to mimic the writer’s outrageous tales sculpted in the most mandarin of English prose. He peers into landscapes from South America, the site of Chatwin’s most popular fabulism, “In Patagonia,” to Australia, where he followed aboriginal songlines, and the landscape of the Black Mountains of Wales that the writer loved most. There is little bluster, only the melancholy of hoping to find the soul of a friend who is no longer physically present. “He was the Internet at a time when, technically, it did not exist,” Herzog murmurs. 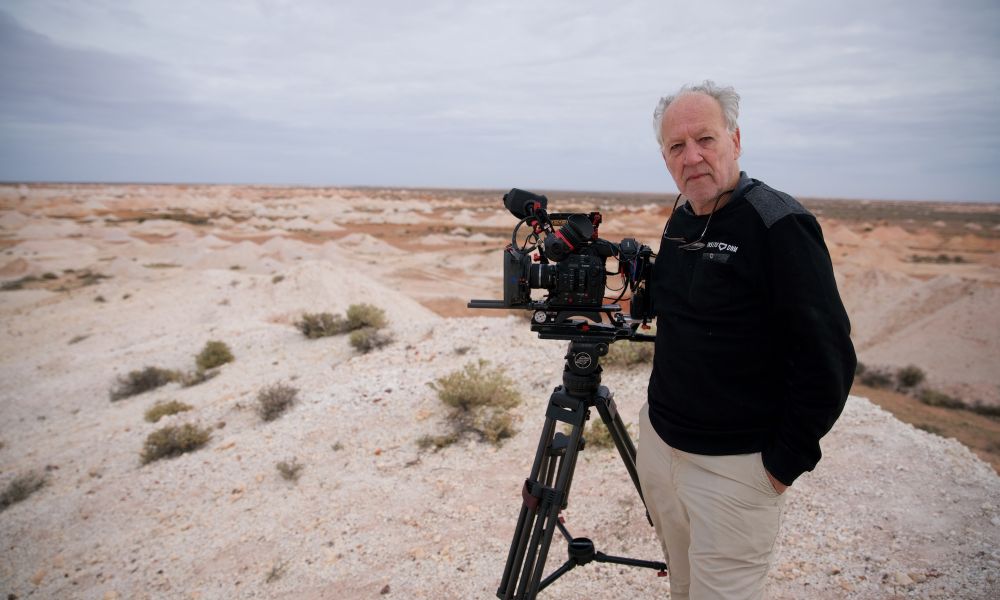 There is no attempt to adapt Chatwin, to be Chatwin, to become Bruce Chatwin: there is the elder Herzog, allowing memories of the writer’s sterling prose and unquenchable wanderlust to wash over the viewer as he replicates their shared love for “the sacramental aspect of walking.” Theirs is a love told in fragments and tangents, stories atop stories, unraveling in the wild places that fostered his books as well as locations since domesticated by tourists drawn by Chatwin’s mesmerizing voice.

Herzog speaks with Chatwin’s widow, as well as his biographer, Nicholas Shakespeare, who observes, “Bruce didn’t tell half-truths. He told a truth-and-a-half. He embellished what was there to make it even truer.” That’s a certain siren song to the ears of the filmmaker who famously declared war against “merely superficial truth, the truth of accountants.” Herzog’s ecstasy is muted in “Nomad,” but its intimacy is vast, and is no less “truthful” than any entry in his vast and always necessary filmography. While fragmentary, “Nomad” should seduce a fresh generation of viewers to seek out Chatwin’s seductive, lapidary books, which are still in print.

“Nomad” opens Friday at the Music Box as well as its virtual cinema.