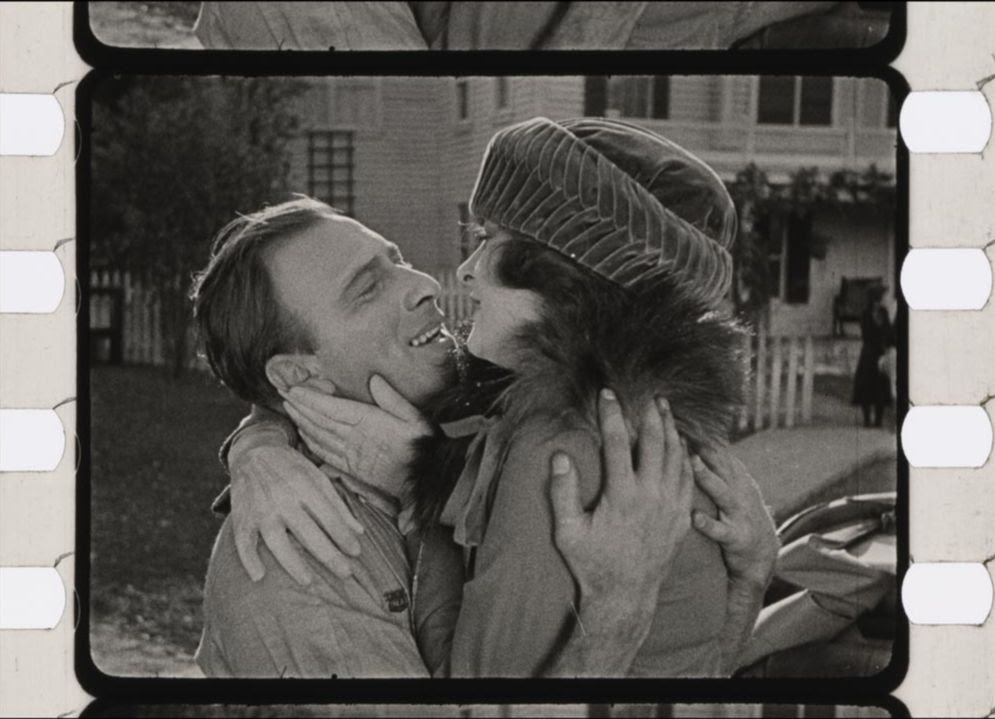 ”That was a great story.”

Bill Morrison, maker of magnificent movie deliria from century-old footage, such as “Decasia” and “Dawson City: Frozen Time,” was one of the former Chicagoans knee-deep in film archives that I checked in with after the news release that the Chicago Film Archives, via archivist Olivia Babler, had unearthed “The First Degree,” a wholly lost five-reel 1923 Universal rural melodrama by Edward Sedgwick, whose work includes Buster Keaton’s 1928 “The Cameraman” (as well as ten features in 1923 alone, including eight Hoot Gibson Westerns). Morrison got the news in a roundabout way, after the fashion of his hypnotic films, partly because of baseball.

“I think I caught it earlier than most,” Morrison tells me, crediting the White Sox. “When Michael Phillips posted his article in the Chicago Tribune because, as a longtime Chicago sports fan, I habitually check the Trib upon getting up in the morning.” He spread Phillips’ early coverage of the 1923 Universal release, “The First Degree,” right away. “I posted a link to the article on my Facebook page that morning and it was ‘liked’ nearly a hundred times and shared twenty-five times from that page alone. So I guess people were ready to hear some good news of this nature. God knows we’re all sick of bad news.”

My first thought, as always with increasingly rare discoveries like this, was how modern, digitally native movies—that would be almost everything made, especially independent and low-budget films—are endangered and future generations will never experience this kind of excitement (or raised eyebrow). A 2013 study by the Library of Congress states that seventy-five percent of feature films made in this country between 1912 and 1929 are denoted as “lost,” with only fourteen percent extant in the form of complete 35mm copies. That survey notes that Universal destroyed its silent film negatives in 1948, leaving the studio with the poorest survival rate.

As for today’s movies, the amount of effort that’s required to “up-res“ each time technology advances or digital media decays, the likelihood of survival diminishes. Digital formats lack the stability of a nearly one-hundred-year-old nitrate artifact. But digital preservation, as Morrison and film curator Dave Kehr of the Museum of Modern Art, pointed out, is a whole other blessing. 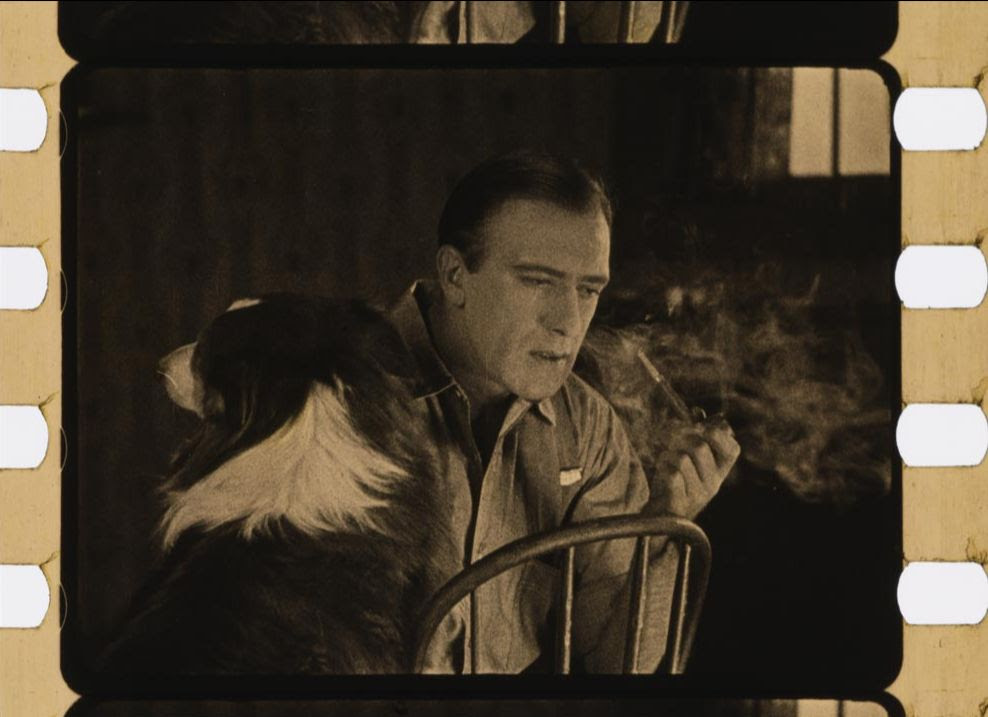 No future cine-spelunker is likely to find a legible hard drive as a digital equivalent to a mismarked can in a Czech asylum or a long-buried Yukon swimming pool or a complete print of “Metropolis” in a Buenos Aires archive or a bequest, as happened here, within in a batch of prints from a Peoria film services company, buried within sixty-one reels of 16mm film and fifty-eight reels of 35mm. Among the miscellany: a live performance of a country-and-western swing band, sponsored films including one promoting eating meat, an industrial film for a Sears, Roebuck line of varnish, U.S. government films to promote better farming techniques, not to overlook “a small number of soft-core erotic shorts mainly showing scantily clad women dancing.” The Chicago Film Archive’s director of film transfer operations, Olivia Babler, telle me she identified the five, tinted nitrate reels of “The First Degree” as unique—a “lost” film—in June, while selecting films to be inspected, scanned and digitized on their Kinetta Archival Film Scanner. (The movie was scanned in July.)

Morrison’s interest in the aleatory character of silent images, distressed and detourned, building upon their intrinsic magic, suggested that his ears would perk up, much like the unlikely cache he mined in “Dawson City,” and would provide at least a modest rush. “The rush I experienced with the discovery of an unlikely cache of films as was uncovered in Dawson City in 1978? I was twelve years old that summer, living in Chicago, and probably didn’t hear about that discovery for another ten years. Every frame I ‘found’ of the Dawson City collection had previously been salvaged and optically restored by professional archivists. A logbook compiled by librarians served as my road map. And while not everything or everyone had been identified or contextualized, their work made the work of future researchers like myself possible.” 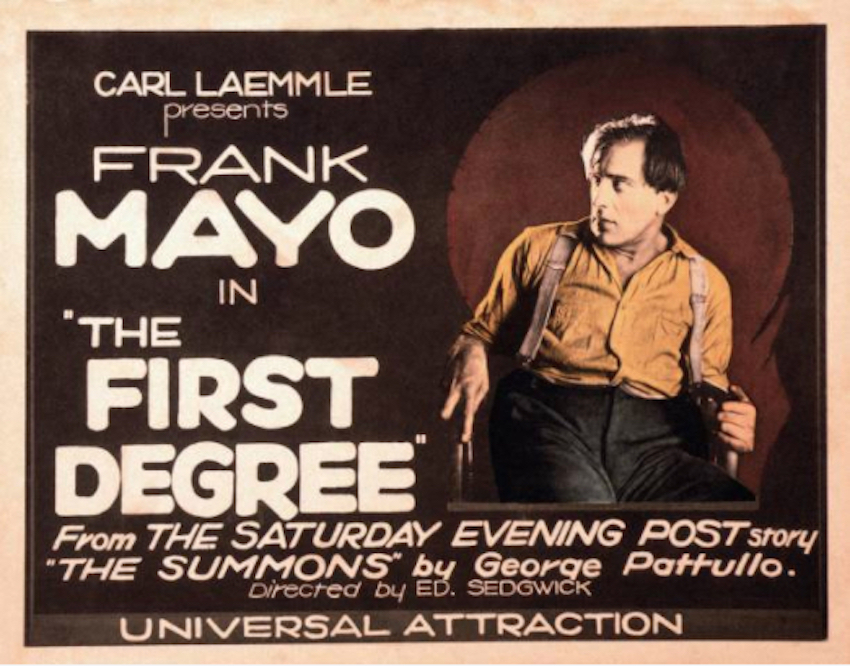 A poster for “The First Degree”: public domain via Chicago Film Archives

The legwork of others and advances in technology have blazed a path for archivists and filmmakers alike. “I think what this story has in common with some of the ‘discoveries’ I made in the Dawson collection is that both archives had recently installed a hi-res digital scanner. I started working with the Dawson collection in 2013. I was maybe getting through twenty titles a day looking at reference 35mm prints on a Steenbeck [flatbed editing machine] in Gatineau, Quebec. Library and Archives Canada installed a scanner in January 2014, and after that I was able to order films scanned and loaded onto 12TB drives, and therefore access at high speed a great volume of material that had seldom been watched.”

Ample, virtuous technology awaits those with resources? “Say what you will about the instability of digital media as a preservation platform, it is an incredible tool for accessing and disseminating ancient images, and indeed, for spreading stories of their discovery,” Morrison says. “I think the lesson here is that there is a wealth of material hiding in plain sight in our archives and libraries. We are now able to safely access and view reels that were previously unviewable or would damage the film to try.”

Curator Dave Kehr, a reformed film critic who began his career at the Reader, says that “so few American feature films exist from the silent era that any find is automatically important. ‘The First Degree’ may not be a masterpiece—but let’s wait and see!—though it will still be of interest to film scholars as an example of a bread-and-butter ‘programmer’ from the period. Universal made dozens of films like this each year to keep theaters supplied in between what they called their “Jewel” and even “Super-Jewel” productions, with bigger budgets and bigger stars, like ‘Foolish Wives’ or ‘The Hunchback of Notre Dame.’”

Studios considered their output ephemeral. “Because few of these films were considered important at the time, not many were preserved and hardly any survive. We might wish that this were one of the Universal programmers directed by John Ford, like ‘The Girl In Number 29,’ a 1920 feature also starring Frank Mayo that isn’t known to exist. Only two other of Mayo’s thirty-four silent features appear to survive, so at the very least it will give us more of a sense of the screen personality of a minor but significant star of the 1920s.”

“I’m not sure where you are going with your latter-day film preservation question,” Kehr says. “There are still significant issues with the stability of digital files, though promising new technologies are coming on line all the time. For restorations, though, digital technology has been a blessing. We can now get excellent results from badly damaged material, in ways that would have been unthinkable with photochemical techniques.”

Plus, the romance of the unearthed artistic artifact. “These surprise discoveries are always exciting, mostly because they hardly ever happen. Most finds these days are made in the archives, where many preserved films are still waiting for the attention of scholars. A good example of that was ‘Lime Kiln Club Field Day,’ a 1913 feature with an all-Black cast, very likely the first, that was found as unedited rushes in the Museum of Modern Art’s Biograph collection, and reassembled by my colleagues Ron Magliozzi and Peter Williamson.”

Still, Morrison concedes the joy of discovery. “There is an undeniable great romantic thrill in stories about lost films found in barns and mines and in wrecked ships, which you can see in my recent short, ‘Sunken Films.’” But he cautions that “the lion’s share are probably in collections that have simply yet to be scanned. And librarians will find them if we give them the tools and resources to do so.”

Updates on the work of Chicago Film Archives: chicagofilmarchives.org