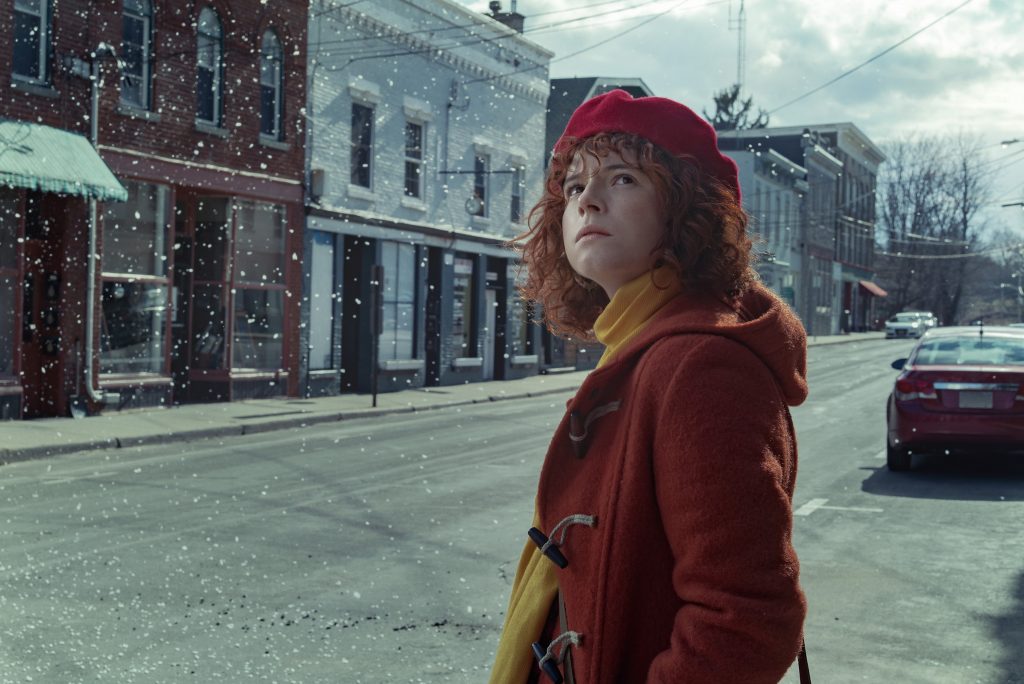 Prolific, too, he has said in the run of interviews promoting his seven-years-in-the-compiling, runamok dreadnought of a novel, “Antkind” and for his first feature as director since 2015’s “Anomalisa” (co-directed by Duke Johnson), “I’m Thinking of Ending Things.”

It’s a beautiful thing, the shape of a skull imagined from inside: the crenellations held fast within the brainpan, deflecting inside that small, unyielding echo chamber, crashing cascades and rivulets run along the river of thought. Both movie and novel comprise unique but recognizable nervous breakdowns. The pain falls mainly in the brain.

“Is an unexpressed idea unoriginal?” is a torturous venturing in “I’m Thinking of Ending Things,” which is a lucid marvel in capturing performances that transform potential mind-melt into the gift of presence. What’s on a young woman’s mind in the face of driving snow and a too-loving, seemingly ideal near-stranger behind the wheel? Maybe ending it. Maybe not ending it. “Maybe it’s human nature to keep going in the face of this knowledge, the alternative requires too much energy,” her interior monologue unwinds. “Decisiveness. People stay in unhealthy relationships because it’s easier. Basic physics. An object in motion tends to stay in motion. People tend to stay in relationships past their expiration dates. People stay in unhealthy relationships because it’s easier. It’s Newton’s first law of emotion.” 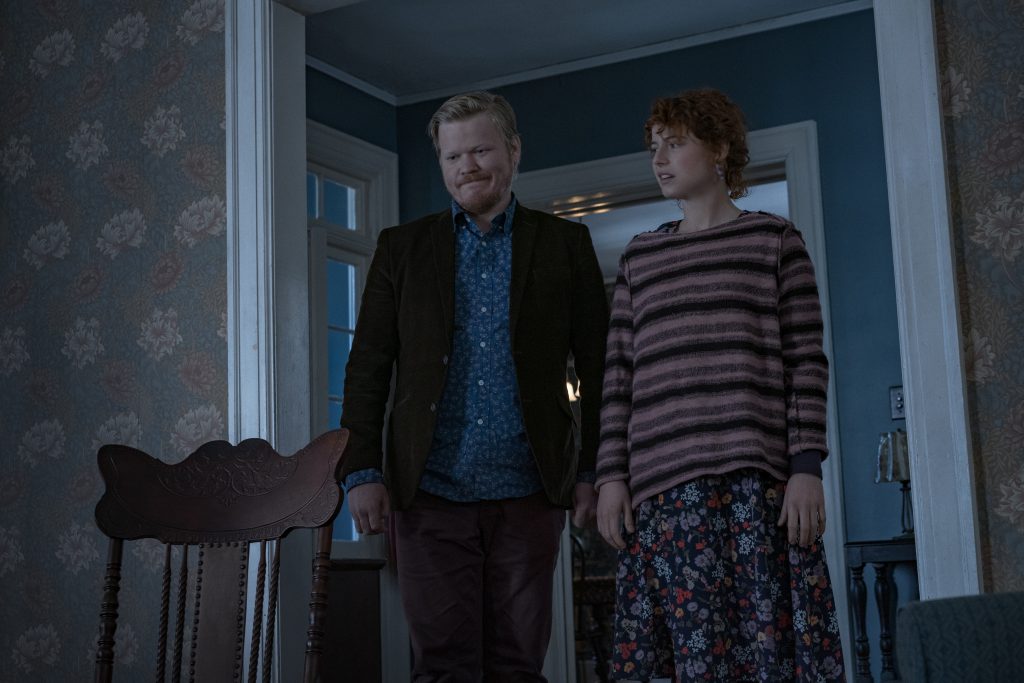 In these moments, Kaufman’s two-and-a-half hour feature runs rings around the Brobdingnagian blunderbuss of his slab of a novel, which like the film, taps the chemistry of the beautifully exploding mind. In the case of “Antkind,” it’s that of a comprehensively despicable rat-fanatic and his fever dream of art and ego, bluster, meta-fictional disarray, Philip K. Dick-style mania, and the wreck-and-wrack of entertainment on the barren plain today. (Sometimes there’s the swim, but mostly the sea.)

Netflix would have you going into “Ending It” thinking “Nothing is as it seems when a woman experiencing misgivings about her new boyfriend joins him on a road trip to meet his parents at their remote farm.” There is a deeply inflected kaleidoscope of stuff that one might cite, a veritable plethora that adorns and elevates the source material, Canadian writer Iain Reid’s tricksy 2016 novel. Art and its scent is evident everywhere in Kaufman’s visual strategies, echoes but not truly homages. Alain Resnais’ time and memory fractures; dramatizations of the climactic scene of “A Beautiful Mind”; Pauline Kael’s review of John Cassavetes’ “A Woman Under The Influence”; lightly lugubrious Swedish comic director Roy Andersson’s constructed horizons, palette deracinated and dimmed, gray to green to dun; “Fight Club”; all within a ragingly boldface ET CETERA. But overall it’s Charlie Kaufman, it’s all that other stuff, but it’s all him, like Ingmar Bergman movies arriving as Ingmar Bergman movies after the influences of all the Scandinavian dramatists, plus the Swede’s youthful heyday making Swedish soap commercials for early television. You don’t need a primer for Kaufman, only an attention span and a willingness to be tested. He got there, and that’s a journey, but he’s here, and he’s all Charlie.

Even more Charlie-Charlie is that first novel, published this summer. It swamps where “Ending It” eddies in its 131 minutes. Let’s dip into “Antkind” for just a jot. “I’m nervous, jittery,” his protagonist writes, a film critic consumed with jealousy and enough subjectivity to sink a submarine. “Too much coffee? First Starbucks, then Dunkin’ Donuts. Of course Dunkin’ Donuts makes the better coffee. Starbucks is the smart coffee for dumb people. It’s the Christopher Nolan of coffee. Dunkin’ Donuts is lowbrow, authentic. It is the simple, real pleasure of a Judd Apatow movie. Not showing off. Actual. Human. Don’t compete with me, Christopher Nolan. You will always lose. I know who you are, and I know I am the smarter of us.”

“I sit in the dark and wonder how I have arrived here,” B. Rosenberger Rosenberg later muses, crunchily. (Is he Jonathan Rosenbaum at the crux of J. Hoberman?)

This passage, can serve as, yes, synecdoche for the enterprise. “There is little doubt that a cabal (I do not choose that word lightly) of film theorists runs the industry. Don’t publicly question their critiques if you hope to climb the ‘sprockets’ to success; they will destroy you. I once had the audacity to call Richard Roeper to task for his Fresh Tomato ranking of ‘Memento,’ which he deemed an ‘ingenious exploration of how memory defines us all.’ It is, of course, nothing of the sort, but rather a one-trick pony gimmick fest that reveals, through its paucity of ideas and pseudo-noir (yawn) mannerisms, that both Christopher Nolan and his pool boy Richard Roeper are intellectually bankrupt and emotionally callow. That this ‘movie’ has received any notice at all, let alone overwhelmingly positive notice, is just more proof (as if any more is needed!) of the corruption within the community of film critics. Memory, were one to give it even an iota of thought, would be revealed to be the most complex area of study available to the human a ‘the profound simplemindedness of “Eternal Sunshine of the Spotless Mind.”’ Had Kaufman actually read Pope’s poem, as I have many times (my senior thesis decimates [sic] Pope for his outrageous misogyny), he would have known it is perhaps the single most wrongheaded title for this bit of sci-fi puffery.”

This is not the end of that passage, the warp and weft is 720 pages and so many detours and pile-ups and so much honk-honk-honking along the narcissist’s mental turnpike. 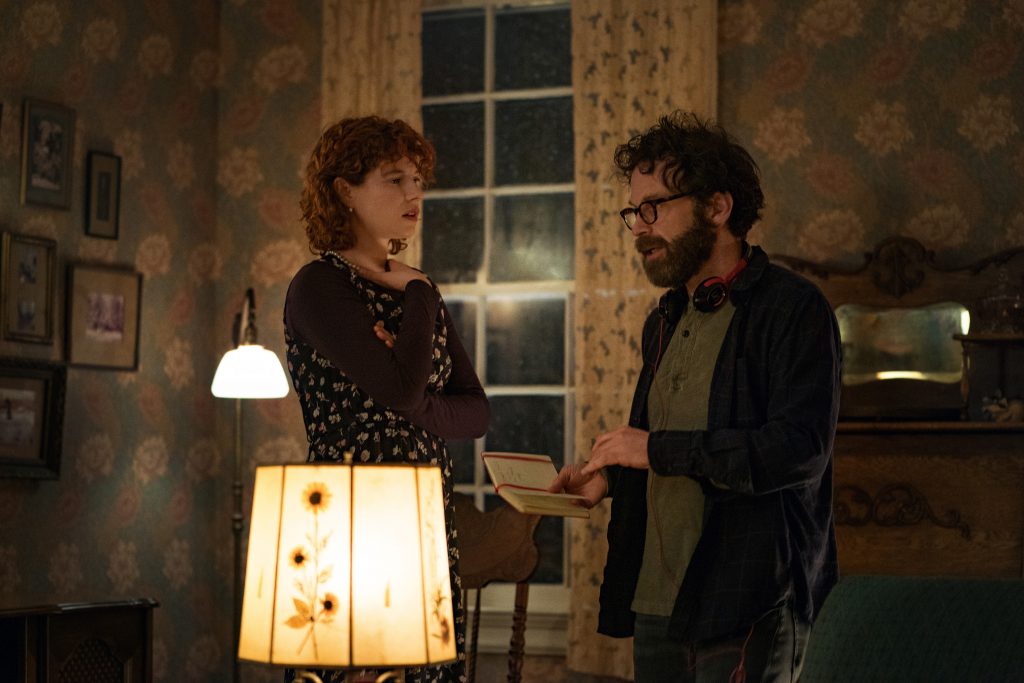 Charlie Kaufman as Director in “I’m Thinking Of Ending Things”

Picking up without a breath: “My investigation into film and memory, ‘You Must Remember This’ (Rutabaga Press, 1998), dances circles around these two (and frankly all) memory films. In it, I perform the experiment of recounting as accurately as possible a film (‘Beloved’) I had seen only once. The preternatural accuracy of my retelling had less to do with my near eidetic memory (true eidetic memory is a myth!), but rather with how I view movies. I am a truly conscious viewer, perhaps the only truly conscious movie viewer in the world. My book then proceeds to explain my method of viewing and acts as a manual for the student of cinema who hopes to achieve a success similar to my own. That I take the business of watching movies with such seriousness is why I am perhaps a tad vitriolic in my disdain for the disingenuous, the vulgar, the tawdry, and the pretentious in films.”

Those passages are typical of “Antkind”’s years-in-the baking cake, bringing two possibly apocryphal Joycean anecdotes to mind, not of the Irish writer’s prose, but first of his wife wearily answering the door to a caller, “Ah, Jim’s in the back, writing his chop suey!” and Joyce’s own beguiling harrumph about the stream-of-sentient-languages “Finnegans Wake”: “It took me seventeen years to write the goddam thing, you can take seventeen years to read it.”

But let’s move on from this twenty-first century “The Life and Opinions of Tristram Shandy, Gentleman.” Let’s get back to the work of major moment. In “I’m Thinking of Ending Things,” Kaufman’s words have faces, his ideas have voices, notably Jake (Jesse Plemons) and “the young woman” (Jessie Buckley). Much of the telling takes place in a car moving within encroaching dark. “That’s why I like road trips, it’s good to remind yourself that the world is larger than the inside of your own head, y’know…”

All the linguistic lubrication that blots “Antkind” is present, but captured by the human face, the aching voice. Matter-of-fact, melancholy keening. It’s a sinister little miracle. These two actors, framed and lit by cinematographer Lukasz Zal (“Ida,” “Cold War”), close-ups that suggest layers of being, and so, so much Buckley moving from woozy congeniality to tipsy top of the morning to multiple intellectual streams, ticking along with a rhythm both assured and lavishly lackadaisical, so much meta on the way to meet his parents (shape-shifting David Thewlis and Toni Collette). While Plemons is both genial and ominous, Buckley’s character warns with an injection of glee, “I’m not a metaphorical-type gal” and that she is taken by the “vague, in-my-head stuff.”

Their banter reads as baleful on the page, but is vividly spoken. “Viruses are monstrous,” Jake says. “Everything wants to live, Jake,” the young woman replies. Like some screenwriting cads insist, dialogue is in fact “interior monologue, revealed.”

David Thewlis twinkling decrepitude as Jake’s father, radiating dumb cunning, craned and crook’d and crass, says “I like paintings that look like photographs. I couldn’t do that in a million years. That’s talent…” Monstrous belittlement reigns, rather than the implausibility of any given patch of authorial agency.

And Father smacks around notions of perspective and empathy with “How can a picture of a field be sad without a sad person looking sad in the field?”

And at table, over a dinner of suspect ham and massed jug wine and rubicund Jell-O molds, Mother pronounces: “I LIKE THE COLORS.” It is horrible; it is delicious.

It unfolds and unfurls before us, our unsuspecting eyes and ears: and that’s not to mention a dozen other white-capped tributaries, not limited to an ongoing tribute to the musical “Oklahoma.”

The words contract, expand, glisten, detonate, seep into the years. Memories murder. The snow falls, swirls, falls some more. “I’m Thinking of Ending Things” does not relent, a way alone, along the mind’s riverrun.

“I’m Thinking of Ending Things” is on Netflix.