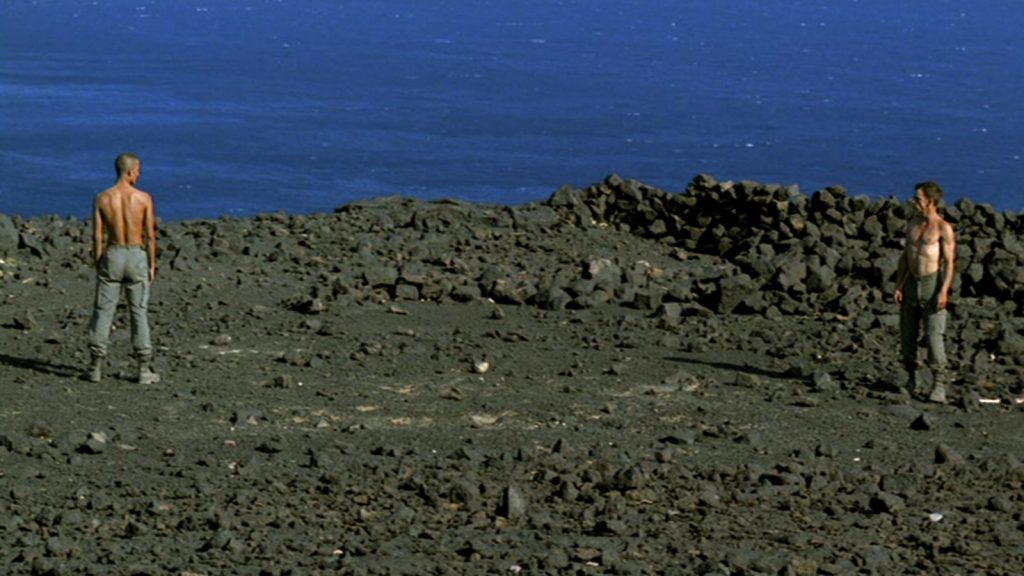 Man’s fate as elliptical dance musical: Claire Denis’ plaintive yet emotional alchemical “Beau Travail” proves, along with the rest of her dreamy filmography, that movies don’t need words. “Beau travail” (a title which Denis was reported to despise) is inspired, sketchily, by the goings-on in Herman Melville’s “Billy Budd, Sailor.” (The score includes pop songs as well as drawing on Benjamin Britten’s “Billy Budd” setting.)

Under the blinding desert sun of Djibouti, Sergeant Galoup (the brooding, mug-faced, ceaselessly acrobatic Denis Lavant from “The Lovers on the Bridge,” “Bad Blood” and “Holy Motors”) runs his isolated community of French Foreign Legionnaires with crisp command. A recruit, Sentain (feline-featured, cool-eyed Grégoire Colin) upsets Galoup’s equipoise. He envies the attentions Sentain receives from his commander, Bruno Forestier (Michel Subor, who bears the same name in Godard’s 1963 “Le Petit Soldat” while playing a deserter). Whatever conflict you anticipate, coiled or simmering, violent or homoerotic, is instead a drenching of mood and inchoate myth.

We are given motion, gestures, enactment of anachronistic ritual. Raptures and vicissitudes shadow and sinew. The soldiers work, strain, sweat; we are immersed in the routines of these stripped-bare Sisyphuses as they are weighted with inexorable fate. The procession of tactile imagery is mesmerizing. Denis has journeyed so far from her child’s-eye African adventure, “Chocolat” (1988). But from her 1994 “I Can’t Sleep,” when Denis first made Paris truly her own, she anatomized a neighborhood through collisions, disjuncture, overlaps. The narrative was elusive, a solution just beyond grasp, elusive, forever mystifying. But it was never infuriating, merely redolent of how cities work, how neighborhoods function as small towns that indicate with secret signs, languages. 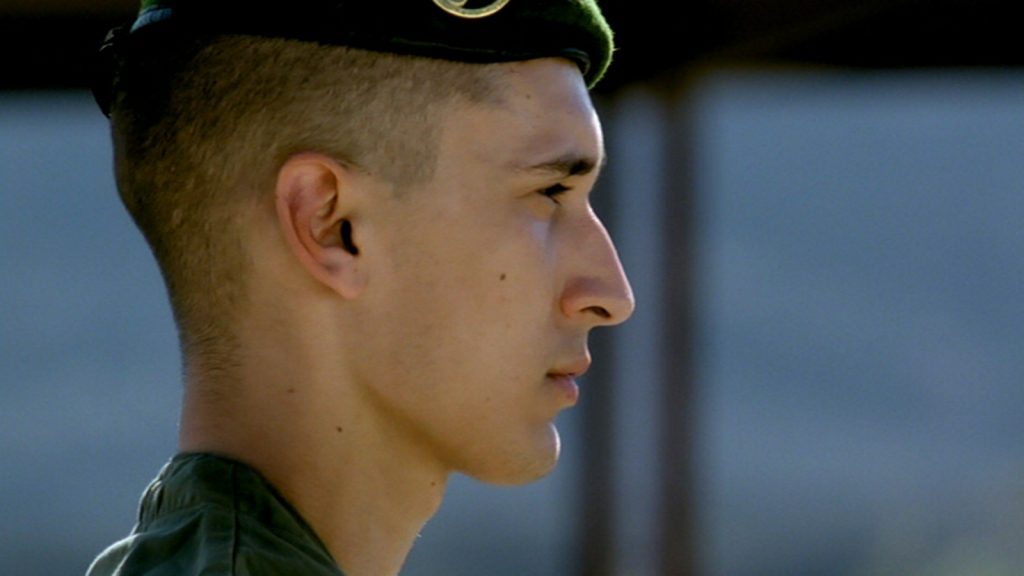 With 1996’s “Nénette et Boni,” Denis went a step farther, dispensing with most plot. Denis was content to examine the ripple of the bare shoulders of a young man (Grégoire Colin) as he fantasizes about an employer’s wife, to move without hesitation into his sex dreams as if they were real. Denis and her customary, brilliant cinematographer Agnès Godard are happy to watch rippling water, light through a window. The same attention to flow, her willingness to find rhythm and free-associate through montage, continues to this day in films like “The Intruder” (2004), “35 Shots Of Rum” (2008) and “High Life” (2018). 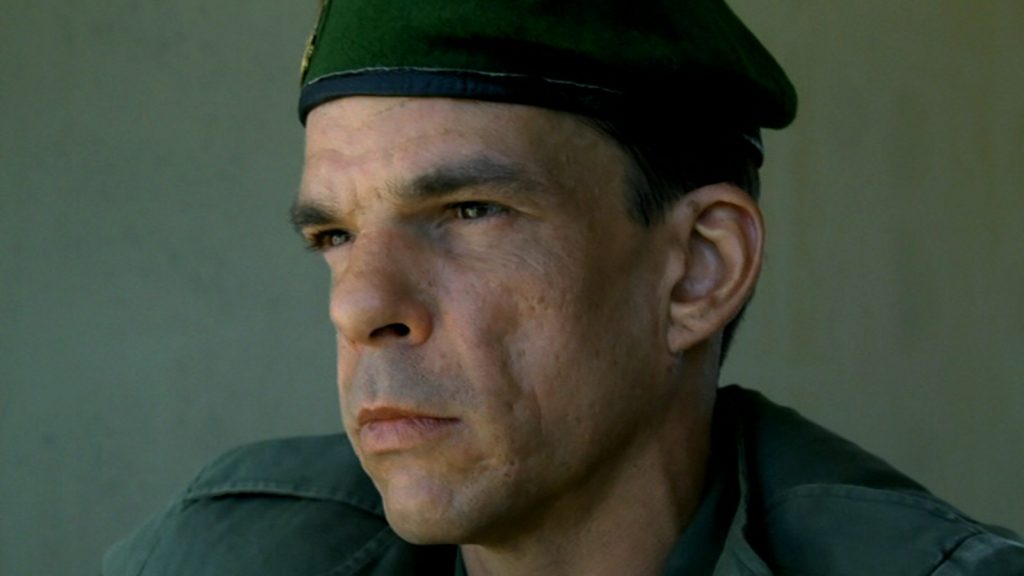 Denis’ work is lyrical, largely through limning unanticipated detail and gesture. It’s like watching clouds pass. Denis’ eye, abetted by Agnès Godard and editor Nelly Quettier, is exacting. Their touch is as delicate and engaged as the fingertips of the blind bringing together the features of a face. Is this drama? It’s certainly cinema. (After I reviewed the film on its first U.S. release, I got pull-quoted on the New Yorker Films video release: “A MASTERPIECE! Exquisite… Mysterious… Magical!” When I showed it to Denis while she was promoting “High Life,” she laughed and laughed.)

And in her near-wordless sketching of these shreds of story, Denis is also attentive to sound. The best filmmakers hear the world as well as see it. There is much drawn from Benjamin Britten’s “Billy Budd,” his opera of the Melville novel, but Denis understands the power of francophone disco. The film opens with a dance scene at a club, where flashing lights and mirrored reflections dart off the dark faces of several African girls—kissing at the camera in rhythm to Corona’s “Rhythm of the Night” and its lyrics, their gleeful smooches matching a sudden burst of silence. It’s like the heart-flutter of Galoup watching the faces, smoldering, admiring their abandon, keeping at a distance. Tragic feeling wrought by a dance song, prompting a maddened dance. 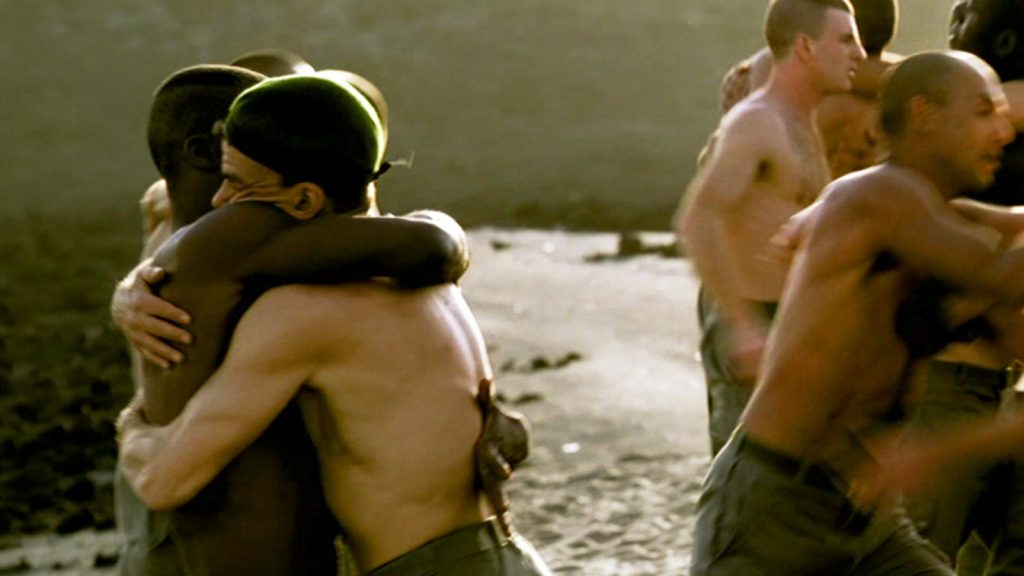 Not every movie could, or should, be like this—stubborn, obstinate, melancholy, laconic, cryptic. But it’s hard to resist Denis’ work, the haze of portent. Some words should be urgently whispered, saved for raptures, spoken only at the risk of casting doubts on one’s judgment or sanity.

“Beau Travail” is exquisite, mysterious and—at the instant its astonishing, cathartic, heartbreaking, climactic scene cuts to black—small perfection. A man’s life in all its torment and reserve, its blasted potential and its grand thirst for physical release and spiritual transcendence: it is there in the most unlikely guise. It is the rhythm of a heartbeat.

Among extras on the Criterion release, Girish Shambu contributes a supple essay. “While the male bodies of ‘Beau travail’ have occupied a central place in both its iconography and the conversations it has sparked, far less has been said about the position and function of women—all of whom are Black African—in this film. They appear in scenes at the disco, dancing with the legionnaires as equals; as craftspeople, like the rug maker who also rescues and tends to the abandoned Sentain; and in groups that bemusedly observe on the street the exotic spectacle that is the legion. In one surprising shot that seems to float above the flow of the narrative, Rahel (Marta Tafesse Kassa), who is Galoup’s Djiboutian girlfriend, holds the viewer’s eyes in a long and direct look, the picture of calm self-possession. Even though women take up a minority of the screen time, their gaze (along with that of the filmmaker herself) plays a crucial role by turning them into witnesses. As Jonathan Rosenbaum has noted, women form this film’s Greek chorus: they provide an ironic and critical frame in which to view the presence of the legion and its men in Africa.” Also: a genial but bizarrely edited conversation shot in early pandemic between Denis and her great fan Barry Jenkins: four angles are intercut; two within their homes as they speak via computer, and the online images. Godard provides commentary on selected scenes, and there are latter-day interviews with both Colin and Lavant.