The widest release so far this year that I know of a sharp, sterling short film traveling under color of another art form—with 2.9 million views by mid-September—dropped on June 17 via filmmaker Nia DaCosta’s Twitter account, a trailer for her film, “Candyman,” told in shadow puppetry of jagged relief, mussed by a score like haunted, broken childrens’ tunes. The visual style should be familiar to Chicago theatergoers who have witnessed a decade of ambitious and idiosyncratic work by the ensemble called Manual Cinema.

“’Candyman,’ DaCosta wrote on Twitter by introduction, “at the intersection of white violence and black pain, is about unwilling martyrs. The people they were, the symbols we turn them into, the monsters we are told they must have been.” The pedigree of the Jordan Peele production comes with its own expectations, from the incisiveness of work he’s directed (“Get Out,” “Us”) as well as co-produced under the Monkeypaw Productions banner (HBO’s “Lovecraft Country”) as well as taking on the gentrification of the Cabrini-Green real estate ten years after the demolition of the project.

While Manual Cinema—the Chicago-based performance collective, design studio and film and video production company founded by Drew Dir, Sarah Fornace, Ben Kauffman, Julia Miller and Kyle Vegter—can’t squeak a peep about their work until the Universal release sees daylight—scheduled to open sometime in 2021—the work, weirdly, wordless, worries up a world all its own. (There is also a story-driven trailer that visits the new film and revisits imagery introduced in the 1992 original by Bernard Rose.)

CANDYMAN, at the intersection of white violence and black pain, is about unwilling martyrs. The people they were, the symbols we turn them into, the monsters we are told they must have been. pic.twitter.com/MEwwr8umdI

It’s the sort of Chicago story you like to hear—a burst of assured, quietly bravura artistry, an arrival that took a decade of diligence, not entirely in the dark, but built in the warmth of community and collaboration. (The group’s artistic impulses and instincts began to coalesce at University Theatre at the University of Chicago.)

While we haven’t spoken for this article as the embargo stands, I interviewed group members Drew Dir, Sarah Fornace, in 2018 for their Court Theatre world premiere of their “Frankenstein,” a mega-meta production that allowed audiences to witness silent movie-style effects both as beautiful finished images within a layered narrative, mimicking the nesting-doll structure of Mary Shelley’s novel and her life, but also in the making as technicians worked their craft on the stage beneath the dream as it was dreamt. (Partial credits for their work with “Candyman” include puppetry designed and produced by Manual Cinema; director for Manual Cinema and storyboard artist, Drew Dir; line producer and lead puppeteer, Julia Miller; puppets and sets designed by Lizi Breit and Drew Dir; and puppet fabrication and lead puppeteers Drew Dir, Lizi Breit and Sarah Fornace.)

Fornace related that the group had “Frankenstein” on their mind for a while, as director Drew Dir admires James Whale’s 1931 film, as well as being a “big fan” of Universal monster movies. (Fittingly, “Candyman” is a Universal release.) “I grew up watching them over and over,” Dir told me, “so it’s like a film adaptation that I know really well and really love. So the idea of being able to work with the cinematic heritage of Frankenstein in our own theatrical medium sounded like oh, yeah, I would like to spend a couple of years living in that.”

While creating their own style onstage, their thoughts also encompassed other forms of “cinema,” as well as philosophy. I mentioned the parable of Plato’s cave, and Dir concurred. “Totally. I think that story of Plato’s Cave also describes a movie theater, how early cinema was. For us, these stories are very much like campfire stories, especially the experience of shadow puppet stories, but drawing that and the modern movie theater closer together and make the experience of cinema as intimate and personable as a campfire story.” 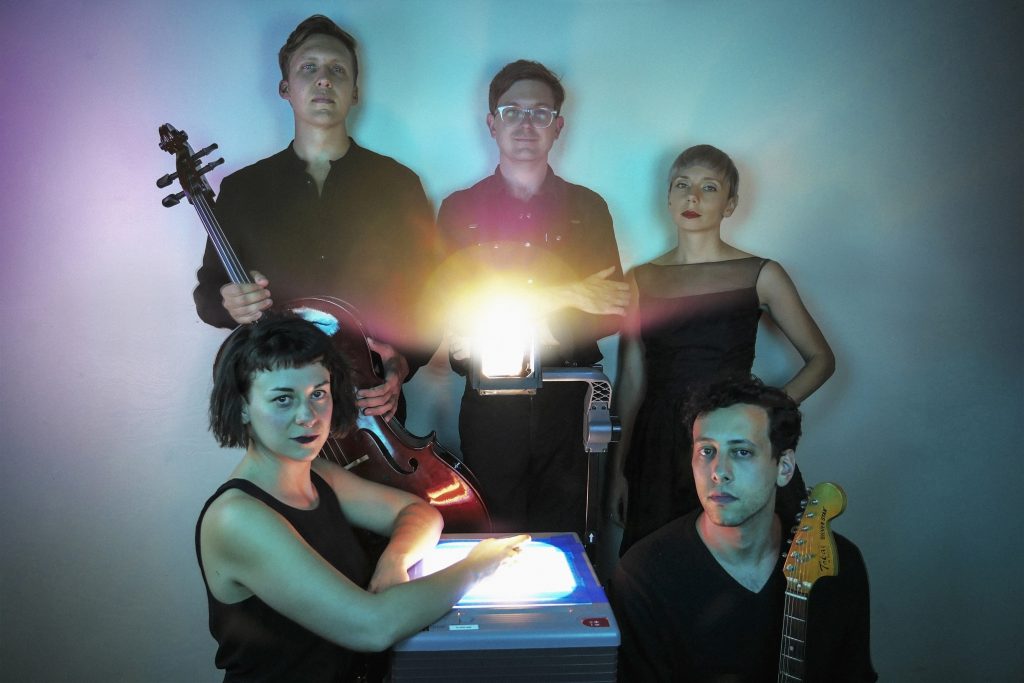 Which is where we arrive at the coming attractions for “Candyman”: the campfire story, shadows and shorthand, sound and portent. “One of our other artistic directors, Julia Miller, got everyone together the first time to do a short shadow puppet piece,” Dir said of the group’s post-teenage origins. “All of us had little to no experience with putting together something like that. So the first couple of years of working in the medium were a lot just about discovery.” They were inventing a style, a form, but weren’t sure what they were doing at first. “Few people had done this kind of work before, so we spent a lot of time just learning what kind of stories you could tell, what kind of images you could make, simply how to use it as a medium.” Dir said that Manual Cinema is still figuring it out all the time, “experimenting with what this medium can do.”

Read about the ten years of Manual Cinema at manualcinema.com