Remembering memories of remembering: that’s the nested nature of a good filmmaker memoir. Worthy memories are caught on film, and in so many cases, the stories that were delved and mined and detonated wisp away as lives go by.

Of course, there need to be more simmering and explosive other stories, less-etched lives of the phalanx of workers who are necessary to make most movies; the inattention of publishing may be as much at fault as criticism and scholarship. (Tell-alls and show-hows could use the contrast of why-nots and what-should-have-beens.)

In the best of the books we have, from Josef von Sternberg to Derek Jarman and beyond, the work that has been made is experienced in amber, further refracted if the film artist has the late-career opportunity to recollect, as well as the necessary zeal to tell stories from fresh perspective can flare mightily or more commonly, tamp last, deadly embers.

The finest efflorescence of the auto(biographical) impulse in this cloistering season was Karina Longworth’s “Polly Platt: The Invisible Woman,” her “You Must Remember This” audio adaptation and expansion of the incomplete memoir on the foundered directorial career of Polly Platt, who excelled as writer, producer, mentor and mind, who was much more than the maudlin muse who first supported the ambitions of the terrible infant Peter Bogdanovich. It’s terrific, and titanic.

Summer brought Oliver Stone’s autumnal “Chasing the Light,” a sweet, earnest rebuke to the seventy-four-year-old filmmaker’s late fiction like “Snowden.” Stone writes clearly about the particulars of his youthful ambitions and rocketing fortunes, the intrigues of getting movies done under twentieth-century film finance, his own fears and failings. “My life after that would never be the same. I’d work for real studios, with real money. I’d go on to have an up-and-down career like most of us, each film widening my view of the world as I went; actually, the films were shock absorbers, marching me through decades of an intense, almost insane American experience… The constant strain of a dog-eat-dog film business geared to make money can wear any good soul to the bone. The movies give, and they destroy,” Stone writes in gentle rat-a-tat-tat. “This is a story about making a dream at all costs, even without money. It’s about cutting corners, improvising, hustling, cobbling together workarounds to get movies made and into theaters, not knowing where the next payday is coming from—or the next monsoon or scorpion bite.”

Dramatic and melodramatic, analytic and relentlessly self-shredding, Stone pleases his perceived audience with a salutary amount of gibes, a squint-eyed menace at those who cross him. As one of the costly writers on what became “Top Gun,” Stone recalls that hit’s co-producer. “Don Simpson would die, bloated and prematurely, of heart failure at fifty-two in 1996; it was reported that he was sitting on a toilet in his mansion, alone, reading James Riordan’s 1995 biography of my life when he keeled over. I do hope he was at least enjoying himself. I always felt a certain kinship in his dancing eyes for the madness of this life.”

Reviewers get a shaggy nod, too. “Most were generally negative” about “Scarface,” he writes, “and sometimes cruel, separating their cult-like devotion to De Palma, who had a semi-Hitchcock status with them, from Pacino and myself—that violent writer. ‘A De Palma Movie for People Who Don’t Like De Palma Movies’ read the title of Pauline Kael’s review in The New Yorker… Her review typified a new kind of self-conscious film criticism, and it ruined a lifetime of going to the movies for me. A sort of super-fandom wherein the critic, putting himself or herself between the movie and the audience, reveled in his or her subjective, specialized knowledge of the filmmaker, as opposed to just watching a movie without knowing who made it—as when we were young. The audience, for the most part, might not know who directed it, and it shouldn’t matter. A film exists on its own merits—no cheating allowed (reviews, money thrown at it, promotions, etc.).” 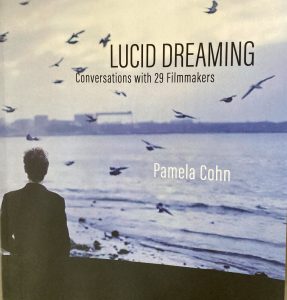 Most films in our world suffer from no promotion. Pamela Cohn, an arts journalist, curator and festival programmer, accrued a raft of pungent profiles (often featured in BOMB and Filmmaker), as “Lucid Dreaming,” of makers of lesser notice (but not of lesser note) whose work may be known to the most informed and the most involved of what comprised the festival circuit until spring of this year.

Writing as a non-scholar, Cohn says that she hoped to “capture a sort of zeitgeist moment in nonfiction moving image as it reflects the world around us in very special ways, encompassing the socio- and geo-political nature of the critical impulse, activism, notions of beauty, sonic espionage and borders both mobile and immobile.” The prose is wiry and the queries spiked: Cohn brings out the best verbiage from makers of vivid, visceral, uncompromising work, in ways that look directly at our moment, not back (and perhaps, by fortune, not forward).

Always looking forward even as he leans backward, the British writer-director John Boorman is chiseling stone earnestly and gainfully at the end of his career, and his “Conclusions” is a flinty, yet funny-to-riotous take on his decades among film folk while getting away with mad-as-a-rat movies like “Point Blank” and “Deliverance” and “Excalibur.” Boorman co-edited a splendid long-running film journal, “Projections” (snap up any of the thirteen volumes you find online) and has written earlier memoirs including “Money into Light” and “Adventures of a Suburban Boy.” Still, “Conclusions,” as Boorman journeys down his many rivers toward his eighty-eighth birthday, is brisk, melancholy entertainment. He is the vivid storyteller, elegantly daubing details.

Boorman has told his fine-feathered anecdotes down to bone, toward compacted comic asperity, but that’s no complaint. “There is a story I have often repeated of a dinner with Lee Marvin on Venice Pier. Lee got very drunk, and I insisted on driving his car,” Boorman recalls. “We struggled over the keys, and when I eventually prevailed, to save face he would not get in the car but climbed up onto the roof, refusing to come down. It was late at night, but he lived only a few miles down the Pacific Coast Highway, so I drove carefully along it. I was pulled over by a cop, who moved over to my window, looked up and said, ‘Do you know you’ve got Lee Marvin on your roof?’”

Smallest asides bloom into ready lesson. “’The General,’” he writes of a small, late great picture, “had street scenes, and I cringed at red and blue cars and orange-garbed street workers distracting from the action. I opted to shoot in black and white. One could argue that film was at its purest when shot on that early, flammable, silver nitrate stock. When it caught fire, it produced oxygen, so it was almost impossible to put out. Safety film lacked the silky blacks and snowy whites and luminosity of silver nitrate. The color stocks that followed were over-saturated and garish. The more film struggled to simulate reality, the further away it got. Film, at its best, offers a parallel, contiguous world as real and as unreal as a dreamscape. Film is metaphor. ‘Point Blank’ was my first color film, and I struggled to deal with color in a noir film that cried out for black-and-white. I decided to shoot each scene highlighting a single color, moving through the spectrum from greys and blues up to the final scene in dark red. This unity gave power to the scenes. Too many colors drench the retina and dissipate the impact.”

Voice that sings and soars, yet the tale is told before you know it: memoirs ought to be more than birth and some muddle in the middle on a clumsy course toward the precipice of death. Boorman shames many from this volume’s first words, with a preface that is introduction and ending alike, spare, earned, luscious: “In old age, words escape me. If I wait patiently, they float up, and I recapture them. If that fails, I am obliged to go down to the cellar, where they languish, and drag them back up. I note that water is starting to seep into the cellar. I fear some words will drown and be lost for ever. The quest for harmony of word and image has been my life. Sight loss is making the world look like late Turners. While I still can, I hasten to testify.”