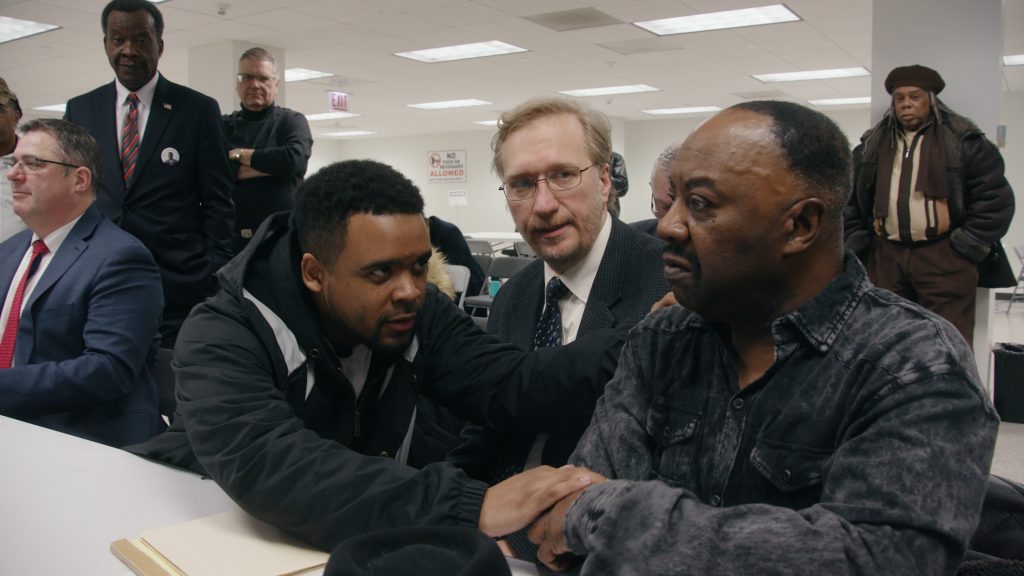 Rickey Hendon loses his temper after attempting to withdraw his challenge at a signature challenge hearing.

Roger Ebert’s best advice to writers was about flow: don’t preen, don’t vamp, don’t overwrite, don’t clear your throat when you tell the story: from start to finish, tell it like a story you’d tell at the tavern on the corner, to a friend or a stranger, jump right in, don’t let them go, stop when you’ve said enough.

Steve James’ films flow. With recurrent collaborators like producer Zak Piper and David Simpson, who co-edited the masterful five-part, five-and-a-half-hour series “City So Real” (subtitled in its first episode as “The American City at a Crossroads”), James and his crew take the 2019 Chicago mayoral election as an armature to drape a teeming telling of a twenty-first-century American city. The stories, as within the seemingly effortless current of earlier work like “The Interrupters” and the ten-and-a-half-hour “America to Me,” would present themselves.

After all, James and his crew were graced these many years ago on “Hoop Dreams” (1994) by catching sight of two of their key protagonists on one of the earliest days of scouting. “America to Me,” a year in the life of Oak Park and River Forest High School, had a central location with largely predetermined rituals, but a city is a city is a city and Chicago is Chicago.

“City So Real” could not be a snapshot, it would have to be a mosaic, a weave of many neighborhoods and thousands of faces, of twenty-one mayoral aspirants after Rahm Emanuel ran from office after details that had been withheld about the Laquan McDonald killing emerged and the man who shot him was taken to trial. So many stories. Class, race, geography. So many desires, hope, fear, rivalries, love, so many aspirants, so many bullshitters; so much bloodsport in politics and real estate and faith, too: in community and the possibility of change. 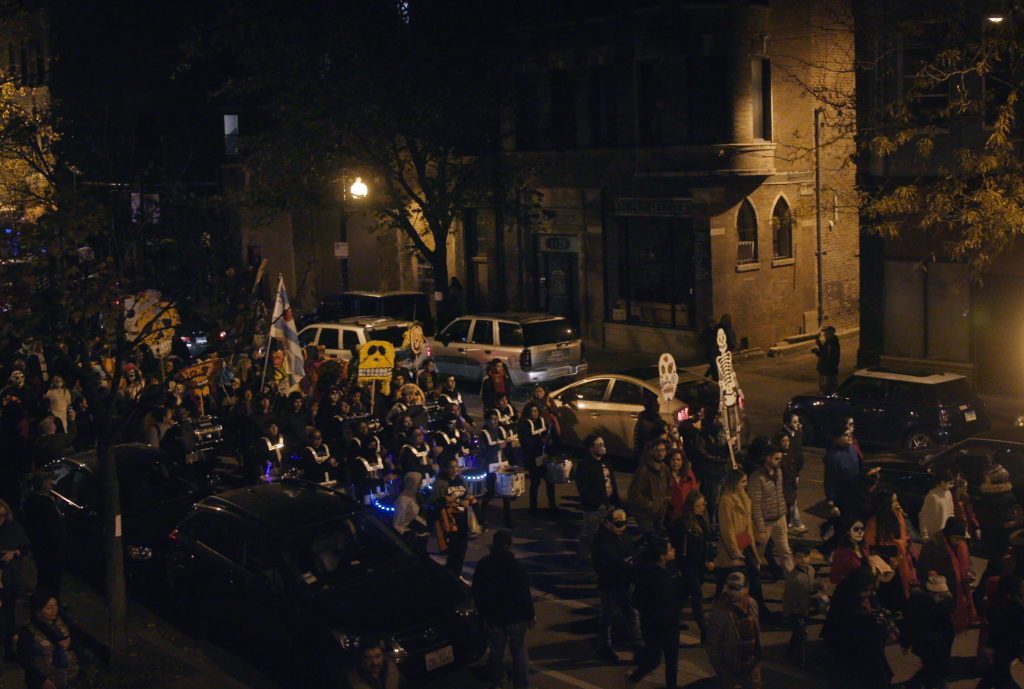 The Day of the Dead march in Pilsen.

If you were to adequately describe the felicity of small moments and the grace of the larger movements in “City So Real,” you would have in hand a lyrical novella atop a steely framework. Lines of poetry, stanzas of beauty. (I have about sixty of them pinned to a page like so many exclamation points.) Or, you would have this supremely confident epic, two tempestuous years of Chicago’s life caught in less than six hours. James’ craft is quiet like a river, but with a mighty source: patient observation, sharply seen and cleanly displayed. On the surface, you could bask in the illusion of elevated journeyman work: the frames are taut and telling, angles apt. But there are turns, echoes, subterranean rhythms, always. (And lingo and swears.)

There are many great city symphonies, but James leaned upon a single filmic predecessor, from 1963, by French filmmaker Chris Marker. “We were inspired by ‘Le Joli Mai’’s serendipitous approach to capturing the city,” James says. “We made a commitment to being as open as we could be to where the story—or even a given day’s shooting—would lead us.” While he had long wanted to make a film like Marker’s classic, it was this moment of upheaval, with the possibility of generational change that kicked into relief. Marker’s film “is set in Paris in 1962, as the French were just getting out of the war in Algeria. There was a lot of political turmoil in the air. I was blown away by the way in which Marker, who’s really a cinematic poet, went about making this film. It was an eclectic mix of interviews and beautiful images of Paris, very much in the spirit of Cartier-Bresson photographs.”

James has always tended to the longitudinal, in duration of observation and in the length of the finished work. But with “America to Me” and “City So Real,” he has arrived at his métier: what Mike Leigh described as “a piece of string.“ The great British writer-director said he never knew more than an impulse of what his narratives would become as he accrued bits of behavior in long discussions with his actors. Ideally, they would attain feature-length, but Leigh cautions his backers “A piece of string is as long as a piece of string.“ 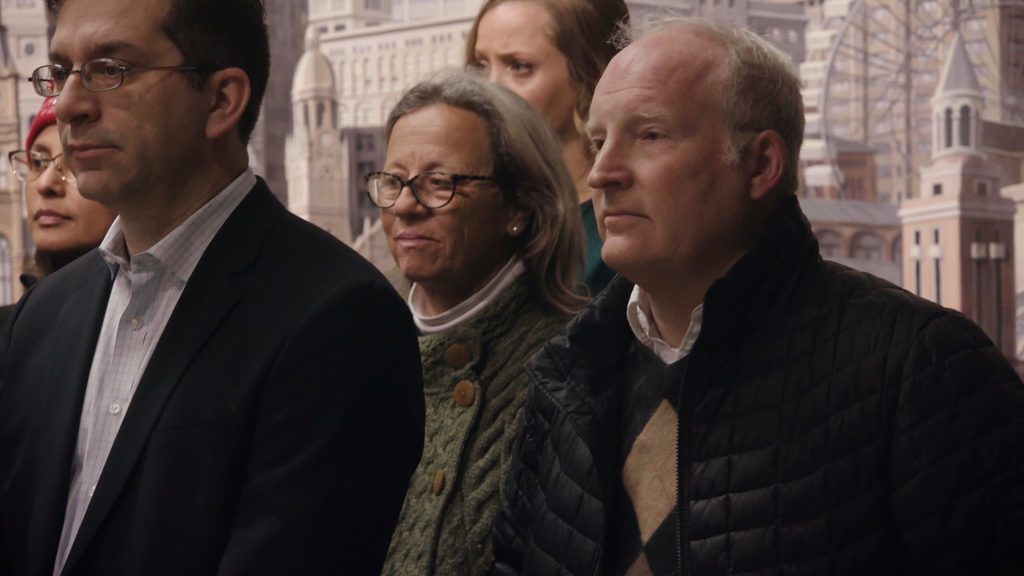 The Hideout’s Katie and Tim Tuten at City Hall.

The most trying snip of string in “City So Real” follows weeks of hardball wrangling between candidates’ seconds and the electoral bureaucracy, going signature by signature on ballot petitions, a prickly process of drudgery and absurdity: process is process yet there are rewards by the end. But it becomes a central element, aggravating like a stone in a shoe. The obstinacy and antiquated idiocy of the civic governance of Chicago is captured in toe-to-toe, head-to-head disputes over the veracity of signatures and even the very identity of citizen after citizen. 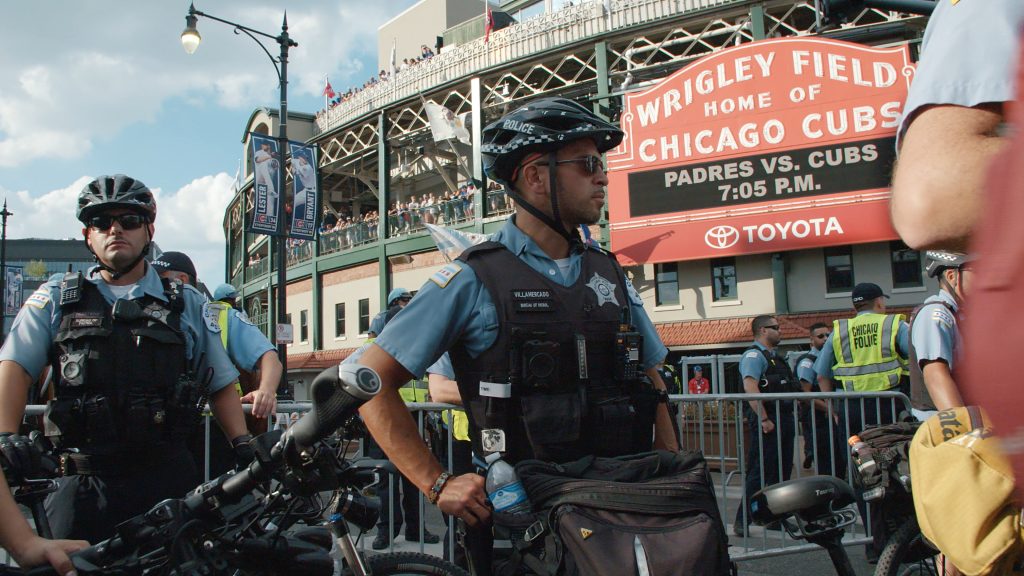 Police outside of Wrigley Field during a protest.

“City So Real” had its first public exposure at Sundance, a James custom that is followed by a return to the editing room for fine-tuning. But in this case, nips, tucks and niceties led to much more than a coda: a further eighty minutes, which locked picture only in mid-October, dropped right into the lap of now.

The fourth hour ends on election night, with a few seconds as Lori Lightfoot wins the runoff, followed by a shot of a Fullerton bus, heaving elephantine in the bruised light of early night, leaving behind dim outlines of a neighborhood corner and storefront neon as doubting voices chorus doubts about the governability of the city.

What comes after that genteel, inconclusive conclusion? 2020 is what comes. A spring and summer of pandemic, the shooting death of George Floyd, unrest, protest, a faltering economy, failing businesses, and the figures and faces of the previous hours, present and persisting. (And so many hopeful faces of the young, the very young and the younger still.) 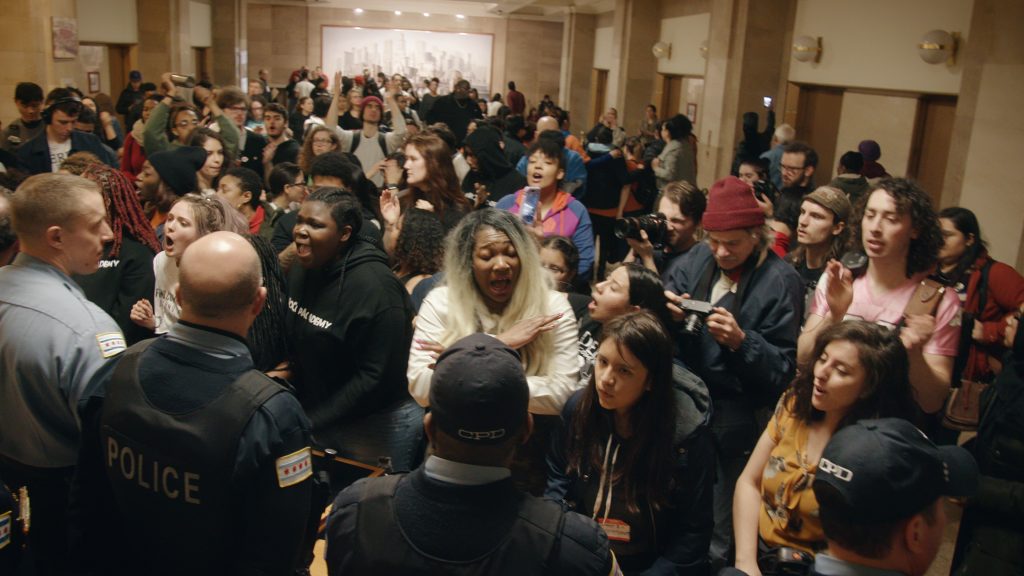 The title is credited to co-executive producer Alex Kotlowitz’s slim 2004 “Never A City So Real: A Walk in Chicago,” which hails from a notorious Nelson Algren fistful: “Yet once you’ve come to be part of this particular patch, you’ll never love another. Like loving a woman with a broken nose, you may well find lovelier lovelies. But never a lovely so real.” Kotlowitz adds, “An imperfect place, Chicago is America’s city: it dreams America’s dream.”

Do dreams flow like rivers or rivers flow like dreams? The montage of James’ work is the galvanic force, its urgent flow that cannot be taken for granted. Look here, look there, and here we are. 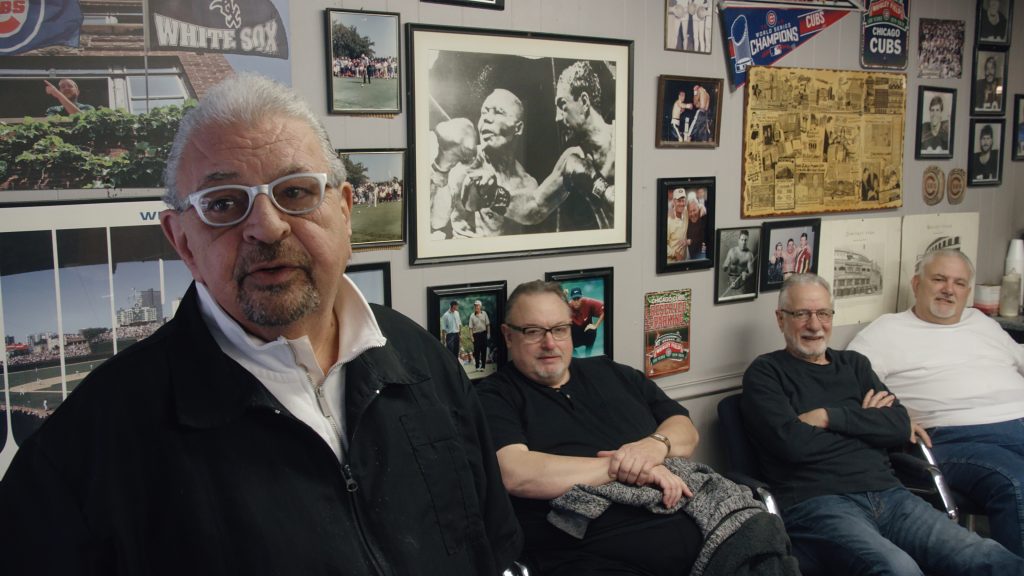 Joe and his clients in Joe’s Barbershop.

A Tribune critic at a “salon” dinner at Christie Hefner’s high-rise aerie looks at the raking rows of glistening light that tail off to dim horizon, that indelible, lavish view. “You look out the windows of this beautiful apartment, you say, okay, is this city going to live up to its destiny?” A dramatic, hopeful note that is dashed by another guest, an elderly former bank president who crashes with a Cassandra chorus: “Look, I don’t want to offend anybody at the table and I really don’t wanna go back to the days when Harold Washington was mayor. Maybe some people do, I don’t know… You could even get to anarchy and I don’t wanna see that.”

But the editing is richly roundabout rather than puzzle-pieced. James moves from that statement to developments in the trial of the man who shot Laquan McDonald. “City So Real” returns to the streets and street corners. Talk-talk-talk. The talk is talked. Some people think talk will bring Chicagoans together.

“You always try to educate people into compliance,” Lightfoot says of a sudden sunny day that broke bright directly after lockdown. “No amount of talking was going to change behavior, so the next day we shut down the Lakefront.” Of protests near her Logan Square house, Lightfoot says, “My family didn’t sign up for that. People can protest… they can come to any publicly available meeting or gathering that I’m at but it feels very different when it’s your home. My daughter is old enough now that it’s impossible to shield her from everything, but I never want my daughter to be afraid in our house, our house has to be a sanctuary for us all.” James moves back to the youth-quaked street; no pause to savor, or even to underline the clangorous irony of Lightfoot’s presumed privilege.

“City So Real” is a feat of observation, but also of listening. It expects you to listen, too: very closely. Listen to the great city. Listen to this great film.

All five episodes of “City So Real” have a commercial-free debut on National Geographic Channel on October 29, and stream on Hulu from October 30.