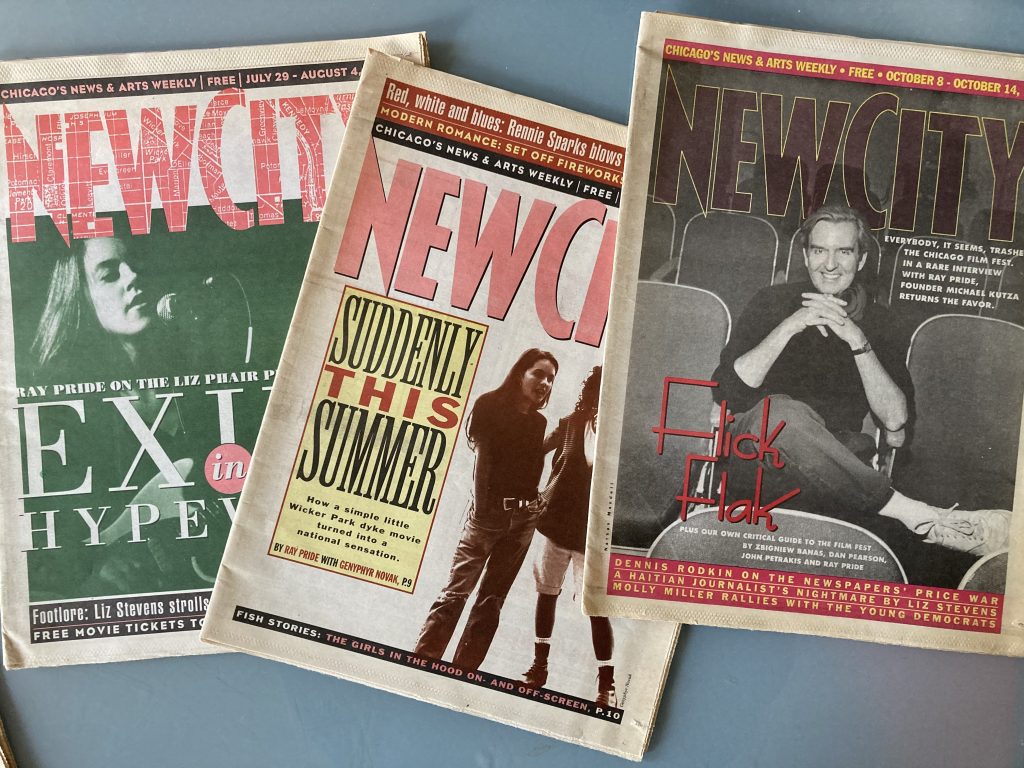 Before becoming Newcity‘s film critic in late 1992, I had contributed freelance pieces to the then-alt-weekly, as well as the Reader and other local folds and bursts of newsprint. I had freelanced since reviewing movies for my college daily, and advance screenings were both work and occasion, even in years before an assured weekly perch. In retrospect, the milieu could have been carted whole from the 1940s or the 1950s. The elders were that old, particularly a generation of publicists. The waning took a long while.

I remember what I saw besides seeing the film, behind the scenes of the seen as much as thousands of movies since. At the Lake Street screening room and its Erie Street predecessor, movies on a busy week might screen at 10am, 12:15pm and 2:30. Letters would be sent, phone calls made, tins of film would be messengered to the screening room door, sometimes with fake names to keep potential pirates off the scent. If producing movies is “money into light,” as filmmaker John Boorman put it, distribution then was celluloid into tins.

Smelly pizza in styrofoam cartons. Gallons of coffee parceled in cardboard. The same pre-screening jokes in ritual profusion. Triple features with rapid exoduses and returns from the 7-Eleven on ground level. There was an ecosphere of publications and screening rooms and secret screenings, and while there wasn’t so much hierarchical pecking order as one might think, you didn’t sit in Ebert’s seat in the back or Siskel’s off to the side of him. WGN’s Roy Leonard would find a genial place ever-approximately in the middle. College critics from diverse backgrounds, young women and younger men, cycled through. 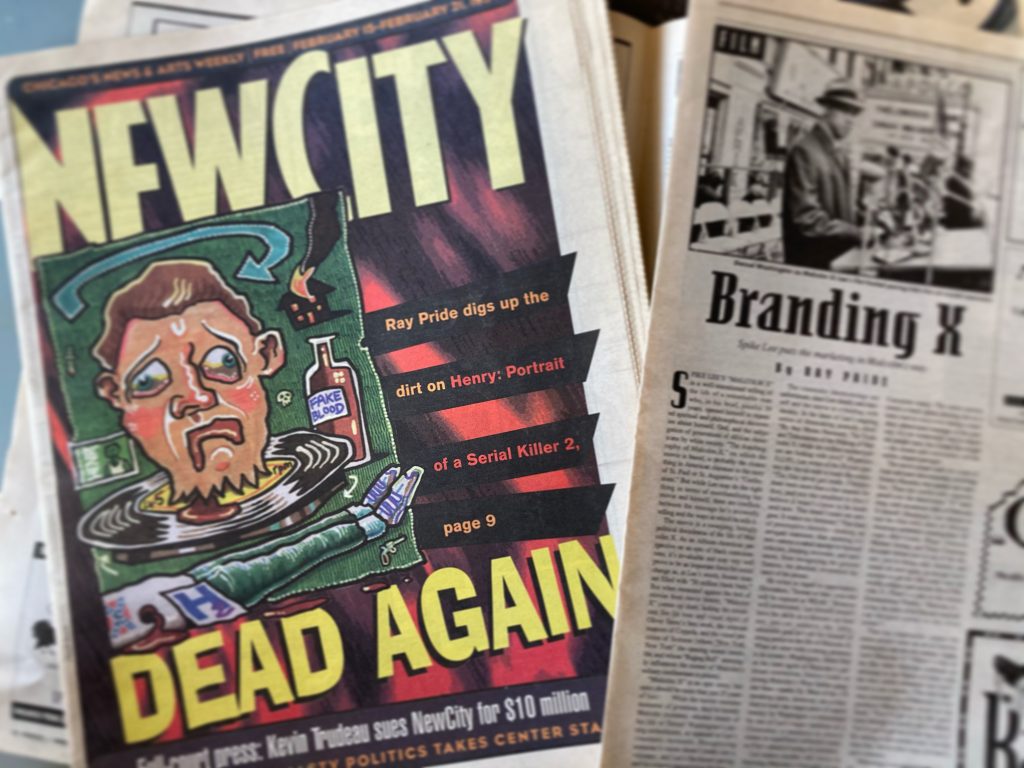 It was the last watering hole, in elephant terms, if not tippling terms, for legendary publicists like the late, calculating curmudgeon Frank Casey of Warner Bros., whose plentiful grudges played out on his fingertips like a blind man in a brothel in a nineteenth-century novel.

These were the true temples, ratty rooms in side alleys or tucked inconspicuously inside office towers yet with sound and image equal to the rooms on studio lots. The dark priests and priestesses gathered. (Or at least many have seen themselves in that role.) New York City and Los Angeles have had their own programming and screening-room culture and lore, which the canniest of filmmakers knew how to leverage. Reviewers were shown brand-new prints, freshly struck and run through the gate of few if any projectors. I know instances of where filmmakers inquired which screenings Siskel & Ebert would attend, who then asked the studio to slip in one of the handful of prints struck from the negative of the film (rather than the internegative from which hundreds of release copies would be struck). Those were the optimum conditions; the couple that I’m aware of were bright and clear like a hallucination, at twenty-four frames-per-second what Peter Jackson claimed for his sixty-frame-per-second “Hobbit.” (One of these clandestinely privileged screenings led to a major Chicago reviewer praising the filmmakers’ unexpectedly vivid work.)

Film programmers had their own tricks when booking the 1970s Varsity, Sandburg and Parkway theaters (Evanston, Division & Dearborn and Clark & Diversey, respectively) and the 1980s Music Box, when they were booking double features on an often-daily basis. The best element I ever observed or eavesdropped on was the cabal-level secret knowledge of every last single 35mm print in circulation, the reels that could be booked, rather than a take-or-leave-it single print, from a handful of urban depots around the country: “I took a reel five from the Atlanta print of ‘Rebel Without a Cause,’ and reel two from Boston, I settled for the local reel four.”

There were a lot of movies. There were a lot of good movies when they were on 35mm film. It was a fertile time for movies, especially specialized ones, only recently just dubbed “indies,” from 1992 through 9/11, in the time after the release of “sex, lies and videotape” by fledging biz bully Miramax in 1989. This market was in a go-go era, including for advertising, particularly for a paper like Newcity. An eleven-by-seventeen issue of seventy-two or ninety-six pages of this publication could have ten or twelve pages of movie ads.

After the suspension of business and fun after 9/11, that era ended and never recovered. The delicate business today is not the survival of media that might lavish glances on forms of audiovisual entertainment and occasional art, but of the knife-edge economics of showing movies. Playhouses and movie theaters anchored neighborhoods, from earliest days and into the 1980s when Newcity came on the scene.

A cinema provides the “bang-on affect”: tickets eagerly bought to “No Time To Die,” the forever-upcoming James Bond production doesn’t mean just a recouped investment by Danjaq LLC, EON Productions and MGM and other financial partners, it’s theater owners and theater workers, it’s the hardware stores that sell the lightbulbs and the vendors who sell paper towels and popping corn to the movie theaters. The projector beam does more than shine on the heart of storytellers; they’re even now often the heart of communities.

And beyond reviews to write and read and the institutional memory of those within associated industries, what would be lost? Conversations that never rose from throats to air: neither here, nor there. One of the great, recurring themes of Fran Lebowitz’s long-running oral history of Fran Lebowitz, and Fran Lebowitz’s role in the history of New York City is that of being not only a survivor of the AIDS holocaust of 1980s New York, but a surviving flâneur, connoisseur and witness. There were generations of writers and performers, composers and musicians lost, but also the audiences, the warm, witty, knowing presences and human memory, the eyes and ears of group endeavor.

Stories are still being fashioned and shared and streamed in the foreseeable future but in that format, in this moment, they are not shared in physical space, cities old or new, downtowns of hamlets and burgs. Storytelling glows with promise. But community? The impulsive and whimsical and habitual things that bring us together, in a shared out-of-home, out-of-body experience? Where’s the love and the lore?

Within that notion of community bound by commerce and shared experience and shared space, there is the personal spark we each can bring. Film festival programmer and longtime friend and colleague Dimitri Eipides, who passed in January at the age of eighty-two after decades in the field, including long sojourns with the Toronto International Film Festival, and recently Reykjavik, and especially his decades with and atop the Thessaloniki international film festival, said in one of his many short, modest yet hortatory notes across the years, “Let’s do it together. The times we’re living in demand it more than ever. And even if someone may find such an idea excessive, I have no doubt that cinema can help: When you walk out of a movie, everything may be the same. But perhaps you’ve changed. Sometimes, that’s enough.”