Searchlight Pictures’ “Nomadland” expands its theater reach while debuting on Disney sibling Hulu; its reception from critics’ groups continues, with nods last week from the Toronto circle (adding to a lengthy roster including the National Society of Film Critics, Boston and London) for best film, director Chloé Zhao and a flinty Frances McDormand. McDormand’s Fern is on the road in a timely yet timeless American West, lyrical and foreboding, twilight in theme and falling light. A big-screen picture with small-screen heart, “Nomadland” expands upon Zhao’s expressive vocabulary of illumination and moment she established in her earlier Westerns, “The Rider” (2017) and the Sundance-developed “Songs My Brothers Taught Me” (2015).

“Demonlover” dabbles in and finally rests in paranoia and dread in its closing scenes. “It’s a movie that adopts the perspective not only of an ADDled teenaged boy but of the internet itself: a jangle of warring narratives fueled by chilly greed and cold-hearted lust. Or a dream shared by a dozen European satellite channels on an icy night,” I wrote on its original release. “Talk about a matrix unloaded! Assayas’ gentler films like ‘Summer Hours’ are fine, but his freak-outs are best.” The friend I saw it with at the time, who has since become a producer, said she found it to be the most “loathsome” film she’d ever seen, yet we talked about it for hours afterward, asking, essentially, whether a film that broaches the limits of pornography can avoid the taint of becoming pornographic itself?

“Most of the movies I watch don’t make sense for me, so I didn’t feel like I was falling outside of the usual categories of cinema or filmmaking,” Assayas told Cinema Scope magazine after the film’s 2002 Cannes premiere. “It was the beginning of the twenty-first century, and I thought it was a pretty good moment to start from scratch, ask myself how I could make something that would be as close as possible to what attracts me esthetically, as close as possible to my perception of the forces at work in our modern world but would be coherent with the questions I have on what cinema is, meaning in terms of making movies but also in terms of watching movies—what the experience of cinema is in today’s society, and questioning the rules of cinema and the rules on which cinema is based,” he told the magazine. “It’s also about asking myself why in mainstream films I can’t have the freedom of adventure, the freedom of movement that, I don’t know, Radiohead have when they are making their recent records, or Don DeLillo has when he’s constructing some of his novels. In music, in theatre, in literature you have people who have been breaking these rules for ages, and connecting to wide audiences, so I thought that movies deserve the same.” Available via the Gene Siskel Film Center, February 19-March 18.

In an online tribute to Barbara Scharres, Chicago Tribune film critic Michael Phillips offered a paean to the recently retired programmer’s four-plus decades at the Gene Siskel Film Center at the School of the Art Institute. The pair looked back, but also forward as the doors of the two-auditorium Film Center remain shuttered for the foreseeable future.

Phillips holds out hope for a return to the before-times rather than a future comprised only of streaming and virtual presentations. “Just the sensory experience of watching a bunch of films this way, on the laptop versus, y’know, the way you and I have known it for years, you longer than me, you more than just about anybody would know because you’ve covered festivals as well as programming.”

“Well, it’s sort of a shabby experience. It’s hard to keep your mind on it,” Scharres concurs. “I was seeing maybe four or five films a day at the virtual Rotterdam. Sitting there looking at your screen and having all the distractions of your home ambience around you, even when a film is really good, it’s hard to concentrate on it when you’re going just one after another and still sitting there in that same chair, looking at your little screen.”

Scharres compares the festival-in-your-lap experience to going to Cannes and its Palais theater, with “one of the biggest screens in the world” and high-end sound. “It’s an incomparable experience. Those films leave an impression on you that’s entirely different.”

“I’d like to think there’s enough people who know what the other way was and will want to get back to it when it’s safe,” Phillips says. “There’s nothing like seeing the image thrown up by this womb of darkness to focus your attention. It’s got to be a neurological thing as much as it’s an esthetic thing. But a lot of people will never go back, the couch is simply too comfortable.”

Scharres, an optimist, says, “I think the experience of seeing films in theaters is going to last.” 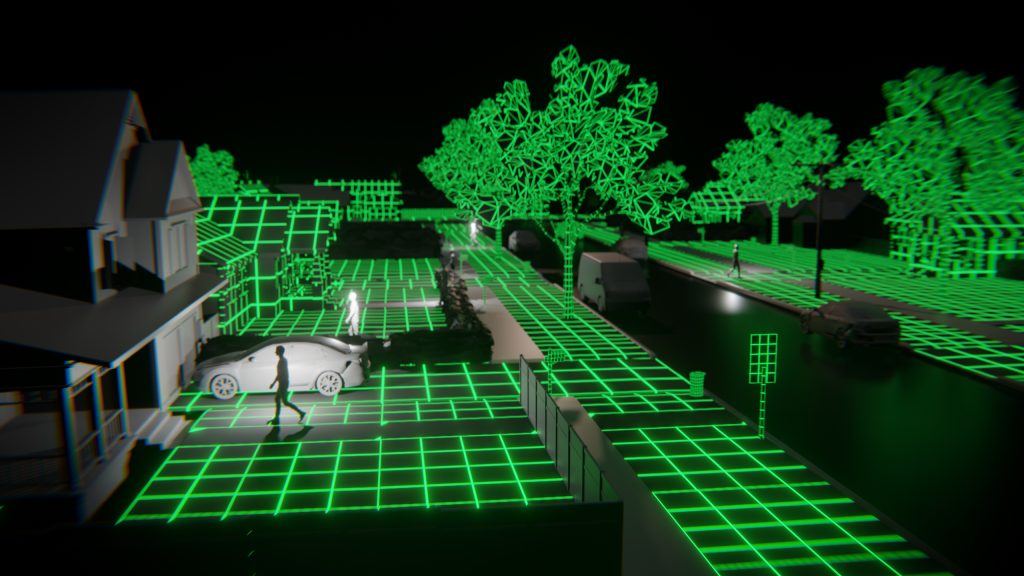 Rodney Ascher hears voices: the voices that resound in the heads of their humans and create echo chambers of strange and stranger beliefs. “Room 237” works on a similar level to “A Glitch In The Matrix.” Is the twenty-first century just a simulation? Or consciousness itself? And how do you explore and explain that concept to yourself and to others? The voices rise but never chorus. “A Glitch In The Matrix” is available at the Music Box and Facets.

“‘Space Sweepers’ just hit Netflix, the most epic Korean sci-fi movie ever made,” tweeted “Mandy” screenwriter Aaron Stewart-Ahn, “about broke-ass junk pirate losers versus the one-percenters relocating to Mars. Hang on ’cause it’s disorienting at first but becomes unexpectedly hilarious & heartrending. I fucking loved it.” Stewart-Ahn’s sugar-rush enthusiasm should be matched by anyone discovering the pulp punch knowing little or nothing about its joys. “Yeah, ‘Space Sweepers’ is messy & overkill at times but finally a sci-fi film with its own goddamn look & future,” he went on. “It’s closest live-action has ever come to ‘Cowboy Bebop,'” he tweeted later. “LOL at ‘Space Sweepers’ future Jeff Bezos’ dumpster Earth & his hideously square Mars in 2092.” (Plus, the characters cheerfully swear—a lot.) “People talking about how [the movie] looks so expensive is exactly why art direction & shot design & even great characters are as important as ‘CGI.'” Stewart-Ahn posted, sealing the deal. “Reported budget was $21 million. You could make fifteen of these for one ‘Transformers’ sequel.” “Space Sweepers” is on Netflix.

These are the ways the world ends: Richard Kelly’s long-rumored Cannes-debut 160-minute cut of “Southland Tales” is included on the Arrow Video Blu-ray; both it and the theatrical release version (at 145 minutes), which Kelly considered unfinished in many ways, are 2K restorations.

A future-facing apocalypse satire-thriller-musical shot in 2005, set on July 4, 2008 with a deconstructing America on the edge of nuclear mayhem, makes many dicey and not-so-dicey predictions of things to come, not limited to Dwayne Johnson becoming a big, large star. From the intelligence that crafted “Donnie Darko,” it’s a mad, maximalist B-movie hallucination for the ages. “Southland Tales” is on Arrow Video.

Alan J. Pakula’s “The Parallax View” gets the Criterion treatment: alongside “Klute” and “All The President’s Men,” two other pictures he made in the 1970s with cinematographer Gordon Willis, the Warren Beatty-starring thriller a resonant testament to the lasting, seething sensation of paranoia. “The Parallax View” is on Criterion.

Steven Soderbergh’s directed at least thirty-four features and has recut and restored earlier films he owns, but the one he’s wholeheartedly kicked to the curb is the light but not lackadaisical “The Underneath,” (1995), which was available only as an extra on the Criterion “King of the Hill” Blu-ray. Kino Lorber has just issued a handsome rendition of Soderbergh’s brightly lit and colored thriller, a remake of Robert Siodmak’s 1949 film noir, “Criss Cross,” drawn from the 1934 novel of the same name. There’s no Soderbergh participation, but there is a commentary by critic Peter Tonguette, who wrote an essay for the Criterion “King of the Hill.”

Steven Soderbergh on “The Underneath” (2014)

Soderbergh thought he was caught in the amber of formalism and set off on the eclectic career that’s exploded in the decades since. The reaction is similar to Steven Spielberg’s on reaction to the slickness of “Hook”: I can do this in my sleep, but how can I make things faster, rougher, better? Soon, “Schindler’s List.” And for Soderbergh, the ground zero of “Schizopolis” (1996) and soon after, “Out of Sight” (1998), “The Limey” and “Erin Brockovich” (both 1999).

Soderbergh and I spoke before “The Underneath” was released, so he knew I liked the film and its patternings: He teased me a couple times after that: “Oh, here’s that guy, the guy who likes ‘The Underneath’!” While also on display in many of his movies, there’s an exemplary scene of the producer-director-editor-cinematographer’s recognizable decorative subjects: women’s feet. There’s a bit of play in Peter Gallagher’s lap in the front seat of a car in a parking lot that takes its fair time to crease and emboss, even embarrass the receptive brain. “The Underneath” is on Kino Lorber Studio Classics Blu-ray.