One of America’s largest markets, Manhattan and the boroughs, after months gone dark, reopens movie theaters March 5, with restrictions similar to those in Chicago. Will moviegoing be back by summer? Fall? In countries whose governments took actions to contain the virus—Australia, New Zealand—the answer appears to be yes. China’s box office has been breaking records for months as eager audiences rush back to the great indoors; China helped push Pixar’s “Soul” (on Disney Plus in the United States) across $100 million in international theatrical box office. Time Out London looks forward to worldwide moviegoing with a subjective and London-leaning list of “The Fifty Most Beautiful Cinemas in the World,” slotting the Music Box Theatre as twenty-eighth.

When asked by Dave Itzkoff in a New York Times profile at the end of February of the pals and “clown princes” why it was finally time for the Zamunda- and Queens-set sequel to the 1988 original, directed by Craig Brewer (“Dolemite is My Name,” “Hustle & Flow”), King Akeem Eddie Murphy and Semmi Arsenio Hall offered cheerful palaver; Murphy says he misses mingling in the world and Hall ripostes, “I can’t wait for those times to come back. The only problem with Starbucks is, Eddie’s a big tipper. When I go back alone, there’s always this look… I leave $5. Eddie will leave them a Rolls-Royce tire.” With James Earl Jones, Shari Headley, John Amos, Louie Anderson, Wesley Snipes, Leslie Jones, Tracy Morgan, Jermaine Fowler, Bella Murphy, Rotimi, KiKi Layne, Nomzamo Mbatha and Teyana Taylor. Amazon Prime, March 5.

Wildly eclectic director Doug Liman follows up January’s quarantine-set heist thriller “Locked Down” (HBO Max) with the long-in-the-works if not long-in-the-tooth adaptation of the first volume in the young-adult “Chaos Walking,” trilogy, “The Knife of Never Letting Go,” a $100-million-plus production that began shooting in 2017. The story of a young woman crash-landing on a planet where there are only men and all their thoughts are visible would seem to be the kind of material that brings out the best and wonkiest in the eccentric filmmaker, as in “Jumper” (2008) and “Edge of Tomorrow” (2014), but the succession of reshoots, postponed release dates and mid-pandemic theatrical release aren’t promising. (An early pass at the story was written by Charlie Kaufman.) With Tom Holland, Mads Mikkelsen, Daisy Ridley, Demián Bichir, Cynthia Erivo, Nick Jonas and David Oyelowo. Liman’s got a big comeback planned after this and the no-profile “Locked Down”: he and Tom Cruise are preparing a picture to be shot at least partially in outer space. Opens Friday, March 5. 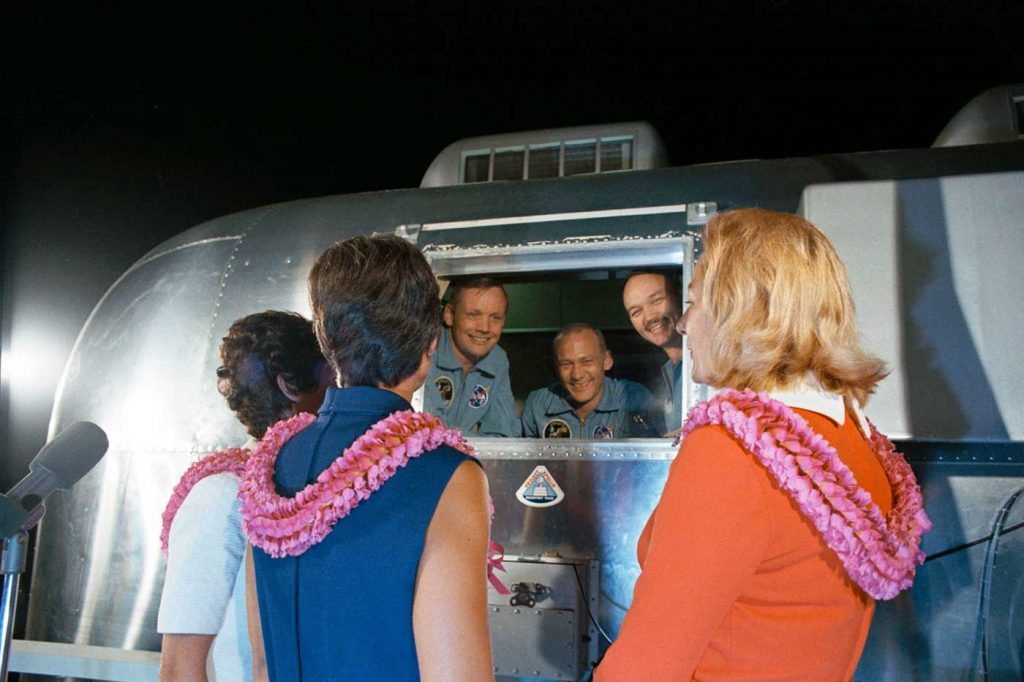 A taut cautionary tale for Liman and Cruise: CNN has the television premiere of producer-director Todd Douglas Miller’s “Apollo 11: Quarantine,” which debuted last month in IMAX showings. The twenty-three-minute short, produced mostly under quarantine conditions, is a sequel of sorts to Miller’s archival marvel, “Apollo 11,” 2019’s highest-grossing documentary. Working largely with the same archive of pristine 70mm footage from NASA and the National Archives as with “Apollo 11,” “Quarantine” illuminates the twenty-one days after the crew’s return from the moon and the fear felt of what Buzz Aldrin, Michael Collins and Neil Armstrong might have brought back with them from space. CNN, Saturday, March 6, 8pm. 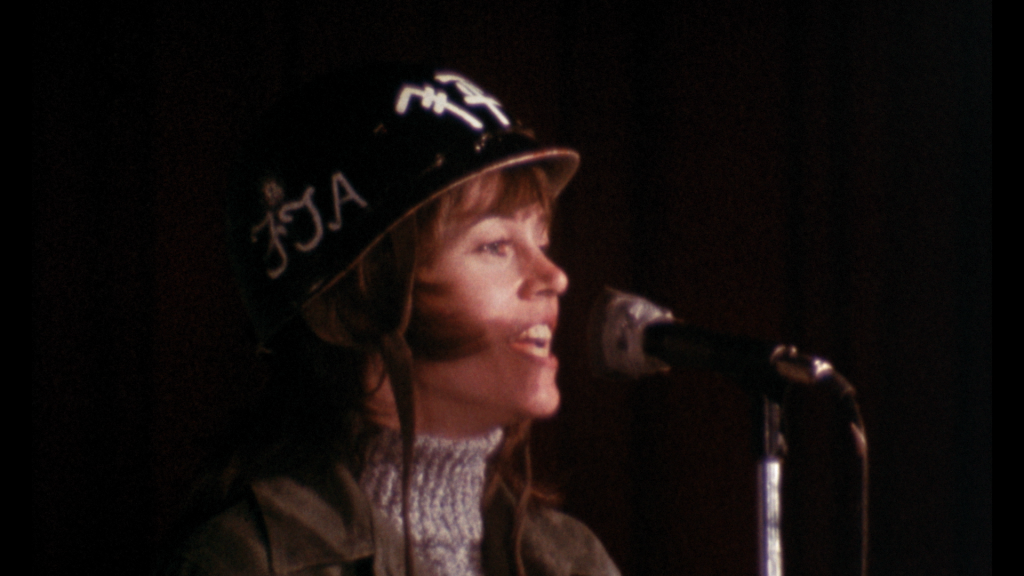 Kino Lorber releases Francine Parker’s long-unseen, restored “F.T. A.” (“Free The Army,” or “Fuck The Army”), the Donald Sutherland-Jane Fonda-led 1972 anti-authoritarian satirical revue that toured Southeast Asia as an answer to antediluvian entertainer Bob Hope’s long-running U.S.O. pageants. The title is a riff on the Army’s “Fun, Travel, Adventure” slogan: The Army tried to limit the tour’s access to soldiers, which added another tagline to the mix: “The Show the Pentagon Couldn’t Stop!” Jane Fonda provides a new video introduction. Another Golden note: IndieCollect’s 4K restoration was partially financed by the Hollywood Foreign Press Association. Streaming via Facets, starting March 5.

“A Shape of Things to Come,” from Lisa Marie Malloy and J. P. Sniadecki (#14  in the 2020 Film 50) is, per Sniadecki, “an unsettling vision of eco-terrorism” and “postmodern borderlands Western, speculative fiction” that follows Sundog, an elderly herbalist-hunter-homesteader who lives off the land in the Sonora Desert. Sniadecki says the film raises “provocative questions about humanity’s relation to the environment, and to itself, amidst the specter of global collapse.” Siskel Film Center, streaming from March 5.

Writer-producer-restaurateur Eddie Huang makes his directorial debut with “Boogie,” a coming-of-ager about Alfred “Boogie” Chin, a promising Queens basketball player who works against everyone’s expectations as he dreams of playing in the NBA. His parents demand he earn a scholarship to a good school, but high school is tough and he makes a new girlfriend. With Taylor Takahashi, Taylour Paige, Pamelyn Chee, Pop Smoke. Opens in theaters, Friday, March 5.

Another of the Siskel Film Center’s lecture series continues with weekly installments of “World Cinema of the 1940s With Jonathan Rosenbaum.” This week: Rosenbaum’s take on the Val Lewton-produced atmospheric horror greats, “I Walked With A Zombie” and “The Leopard Man” (both 1943). Viewers stream the movies ahead of time; sources can be found here. Tuesday, March 9, 6pm, Siskel.

Chicago filmmaker Deborah Stratman’s “Vever (For Barbara)” (2018) is featured on MUBI on International Women’s Day, on a double feature with Lynne Sachs’ “A Month of Single Frames,” films made with unused footage by experimental filmmaker Barbara Hammer. (Stratman is part of the Film 50 Hall of Fame.) MUBI.com, March 9.

Five features by distributor-producer-writer-director Jeff Lipsky surface as “The Jeff Lipsky Collection” on Kino Now, including 2019’s “The Last,” “Twelve Thirty” (2011), “Molly’s Theory of Relativity” (2013) and “Mad Women” (2015). Lipsky’s films can be prickly and tricksy, but in telling and idiosyncratic fashion.

My favorite of the bunch would be 2006’s “Flannel Pajamas,” a misery-of-relationships story of a misjudged mixed marriage filled with bold performances starting with a ten-minute blind date scene, and especially by Julianne Nicholson, who performs a coruscating, unvarnished, sexually explicit monologue while wholly exposed. Lipsky, as I wrote in a review of “Twelve Thirty,” can be given to “long skeins of prose that only sturdy talent can bring to blood.” Kino Now, starting March 5.