Richard Jenkins and Shane Paul McGhie in “The Last Shift”

Opening night, Sundance 2021, streaming to hundreds of homes around the United States instead of a single Park City screen in front of a rapt audience, “CODA,” a family dramedy rooted in the lives of children of deaf adults, was the festival’s dream-maker and stream shaker, plucked by Apple for a record $25 million. This is the golden dream, the torrid, terrible lottery ticket so many hope to grasp, even if they can’t or won’t admit it, when they submit their dreams and wares to sales festivals around the world (which also have included Cannes, Berlin and Toronto).

Undercurrents between the men ripple and rise to revealing effect. “The Last Shift”’s producers include the Bona Fide team of Ron Yerxa and Albert Berger (“Election,” “Little Miss Sunshine,” “Nebraska,” “The Peanut Butter Falcon”) and Lipschultz, with a roster of executive producers including Lance Acord and Alexander Payne. Payne admired the script enough to help it in the thickets and underbrush that comprise finance and production of independent movies. Berger, who in his youth co-owned Chicago’s Sandburg Theater art-house, was joined by longtime partner Yerxa in a rare interview with the Bona Fide team in the Los Angeles Times a couple days before the Sundance debut of “The Last Shift,” the shingle’s ninth entry at the festival. “Our overall impulse is not to be didactic or pedantic, not to have a theme that’s pounded in,” Yerxa said of their approach, which is fulfilled by the quiet ambition of Andrew Cohn’s feature debut. “We want to have films that reflect some kind of progressive ideas, a view of what might be possible in life. It may be a drop in the bucket, but at least it’s a drop.”

I spoke to Illinois native Lipschultz about the dream of Sundance, a year after Sundance, for the Illinois-shot, Midwest-set film, which pushed through cloud after cloud even above and beyond the pandemic’s transformation of how movies were and were not shown in theaters in 2020. How relative is any kind of success coming out of that marquee festival, or for that matter, any festival that doubles as a market?

Their film premiered on January 27 at The MARC Theater, one of Park City’s larger venues, Lipschultz recalls. “It feels like that was about five years ago, so frankly it’s hard to recall much about the evening except that the audience seemed to love the movie and the hors d’oeuvres at the after-party were delicious.”

The movie didn’t sell during the festival, but before the vast and disruptive implications of the pandemic kicked in, it was acquired by Sony Pictures Worldwide Acquisitions, an arm of Sony Pictures, which slated a theatrical release in September of 2020. Scattered theaters were open around the country, and the small picture opened on 871 screens, a wildly large number these days for a movie of this size. In the before-times, this would indicate extreme confidence on the part of a distributor, but the fact was that expensive, star-driven or tentpole product had been withheld from release, the studios measuring the waves of theater openings and closures. Still, even with reduced capacity in the locations where it played, “The Last Shift“ ended its fall run with a domestic gross, according to IMDB, of just over a million dollars.

The active production process had begun less than two years earlier. Lipschultz credits Sam Bisbee at Park Pictures for financing “some late-stage development in putting a budget together while we kept looking for the rest of the money to close out the budget, which, was, y’know, low seven figures, let’s say. By the time Richard Jenkins and Ed O’Neill were attached, I think that was just after Thanksgiving and Christmas of 2018,” which would be less than a year before Sundance would notify filmmakers of its selections for the 2020 event.

“Once we had the shiny names of two wonderful actors, we started dialing for dollars. So between the time we started looking for money and when we secured the entire budget, I think by March, we had all the money to make the movie.” He also credits the State of Illinois and the film office. “We worked with them for a tax credit as well, which was essential to making this movie. They were really wonderful and the process was smooth and straightforward. The film is set in Michigan, but the fact is that Illinois has a comparable look. That tax credit plus the great crew base in Chicago was essential to our deciding to shoot the movie here, not to mention that both Albert and I grew up here.”

“The Last Shift” has familiar contours, its story toying with genre in its tight, ninety-minute running time. “Yes, it’s a movie that starts very much by playing with the tropes that are in a very durable sub-genre of race buddy comedies, I guess you could call them. ‘Driving Miss Daisy’ fits in there, more recently, ‘Green Book.’ ‘The Upside’ with Bryan Cranston and Kevin Hart. That said, I don’t really like those [particular] movies for a lot of reasons. They’re very well-intentioned, but in execution, leave a lot to be desired. The story of ‘The Last Shift’ very gradually but clearly over time, felt a lot more authentic and by virtue of that, also felt a lot more incendiary.”

“Look, there are a lot of things that drew all of us to the project,” he says. “Close to the top of the list was the way that Andrew captured a slice of Midwestern Americana that you don’t see, that you don’t see done particularly well, in an authentic fashion, in most cinema. Alexander Payne’s work is a rare outlier in how authentic it is in place and the vernacular. What separates this film is that it very much straddles two disparate but interwoven communities of white Midwesterners and Black Midwesterners and how those two communities work together and are unfortunately at odds.”

“The Last Shift”’s history illuminates a factor overlooked in the confoundment and consternation of the first pandemic year: the economy of attention. How awareness is stoked, at a festival, afterward, as a film hurtles toward release and through the cascading of successive revenue streams across the windows in a movie’s economic lifetime. Were there good reviews? Confused reviews? Any reviews at all? If a film plays at ShowPlace ICON unaccompanied by these familiar forms of cultural consciousness, has it played at all?

What’s important about a comedy-drama built on behavior and observation and stirring political undercurrents is awareness, how it’s prepared, positioned and ultimately put on sale. When movies are dropped into an endless scroll of video-on-demand choices, how do any stand apart? The theatrical release of “The Last Shift” lacked the accustomed advantages of orchestrated publicity, even as tickets sold across the land, and some reviewers reportedly saw a preview copy that was inadvertently defective, missing much of its score. 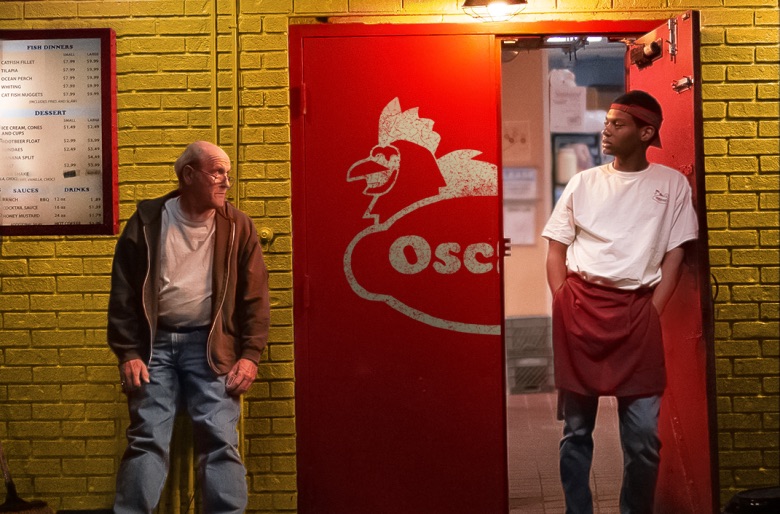 The creators of “The Last Shift” got to celebrate its reception and its Sundance reviews, and in the larger scheme of things, with a satisfactory deal that included a theatrical release, is a success in these erratic, volatile times. “It’s so hard to know,” Lipschultz says, generalizing about how features are received at festivals. “Festival exposure can determine the trajectory of ninety-five percent of independent films. The dirty secret of indie filmmaking is that simply getting into Sundance, Cannes or TIFF or Venice, or Berlin, or wherever, does not in any way, shape or form guarantee you any kind of critical success or success with distribution or making revenues with sales at the box office, let alone your film making even a portion of your budget back.”

That elemental fact constitutes a brutal shrug. “It’s this extremely bittersweet, almost tragic thing that happens to most of the films that premiere at these festivals, unless it’s a gargantuan Oscars title premiering at Telluride. These films, you get in, the filmmakers and producers are so thrilled to be part of the percentage of submissions that were accepted at an A-list festival, particularly if you’re a first-timer. You think, this is how it starts! This is where the paltry salary I got paid for making this film turns into enough money to buy a vacation home or put my kid through college. That does happen! A couple of times a year. Your odds of getting in are insanely low and then your odds of breaking out are even lower. When you really boil it down, I think it’s four percent of submissions to these festivals get into these top-tier festivals and then thirty percent find a successful life after that? It’s tough to gauge: conservatively, fifty percent of movies at Sundance every year lose money for their financiers. You know the money isn’t why we make these movies, but the people who put money into them certainly expect it back or want it back. The sales are really tough to predict. More often than not, it’s an unpleasant surprise.”

Lipschultz considers the experiences others had coming out of Sundance 2020. “I know people who had really well-reviewed movies last year, who still do not have distribution and are trying to figure it out. That’s out of Sundance; these are English-language movies, made in America. It’s really tough. There’s a real wake-up call that first-time or second-time producers get. Months can go by. That deal can be for no minimum guarantee whatsoever, meaning you could just be handing your movie over to a distributor, which has to recoup all their costs plus a premium and interest before money starts to come back to your financiers. Sooner or later, every producer has a movie that just utterly shits the bed as far as sales go. That happens a lot more often than anyone wants to admit. It did not happen with this movie. It took time but we ended up in a very healthy place financially with it.”

“The Last Shift” is available on video-on-demand, DVD and Blu-ray.