“History Is Made At Night”

What first appears a fallow week for film openings still holds a raft of holdovers via virtual cinema at venues including Siskel, the Music Box and Facets. There’s a good chance we won’t see a return to the art-house logistical straitjacket of showing a couple of movies on a couple of screens: when the communal experience returns, the on-demand convenience may not just linger but flourish.

New pictures include the art chronicle “Bill Traylor: Chasing Ghosts”; the Tibetan “Looking For a Lady with Fangs And A Moustache”; and an awards-season run of magical Irish animation “Wolfwalkers” onscreen at the Music Box.

Melissa McCarthy and Ben Falcone’s nominally Chicago-set “Thunder Force” is on Netflix. Jennifer Reeder continues her “Unknowable Women In Film” discussions with Chantal Akerman’s methodical “Jeanne Dielman, 23, quai du Commerce, 1080 Bruxelles,” and Frank Borzage’s goofy, giddy, sublime, super-serious 1937 “History is Made At Night” is restored and on Blu-ray in a form as bright as its heart.

Jeffrey Wolf’s “Bill Traylor: Chasing Ghosts,” presented by Sam Pollard (“MLK/FBI”), documents the life and pioneering art of a man born into slavery on a rural Alabama cotton plantation around 1853, and who only started to draw and paint in his eighties after a long life as a sharecropper and odd-jobs man who wound up alone and homeless. Traylor made a thousand drawings and paintings between 1939 and 1942, and “Traylor witnessed profound social and political change during his life spanning slavery, Reconstruction, Jim Crow laws, and the Great Migration,” the filmmakers write. “The transcendent surprise is while Traylor kept to himself leading an unassuming life, he was nurturing a remarkable creative gift that would not be expressed for decades.” Archival footage and photography alternate with period music, spoken word and tap dance as well as Traylor family members. Streaming via Facets and Music Box Direct.

Apple TV Plus’ fantastical and fantastic Irish animation Oscar contender “Wolfwalkers,” by Tomm Moore and Ross Stewart, opens via GKIDS at The Music Box for an onscreen run prior to awards night, April 25.

Tibetan-Bhutanese writer-director-lama Dzongsar Jamyang Khyentse Rinpoche, also known as Khyentse Norbu, whose features include “The Cup,” returns with the vision-driven “Looking For a Lady with Fangs And A Moustache,” about a man in his thirties searching for the perfect location for Kathmandu’s first European-style café.

Melissa McCarthy and Octavia Spencer in “Thunder Force.” This is “Chicago.”

Sort-of Chicago-set “Thunder Force” is the fifth Melissa McCarthy comedy from writer-director-co-producer-co-star Ben Falcone, who is also McCarthy’s husband. McCarthy and Falcone were in the Groundings comedy troupe, and “Thunder Force” plays in that messy kind of pen, even if the characters and situations aren’t actually holdovers from twentysomething devising and improvisations. The desultory comedy comes out of estranged childhood friends McCarthy and Octavia Spencer developing superpowers and joining forces in a world of sketch-comedy supervillains, known as “Miscreants.” And from being set during a Chicago mayoral race. It’s kindly but pitiable, like a confused but amusing kitten you hope will grow someday to be strong—even fierce. With “Thunder Force,” I spent my time waiting for authentic Chicago locations versus faked Chicago locations. There are a lot of not-Chicago locations: these aren’t even the Quad Cities of not-Chicago locations. But there’s at least one thread of late 1980s-style location work: second-unit establishing shots of El trains passing past apartment buildings that stand only a couple feet away. But there are Old Style cans! And signage! Da Bears! It’s an entire world! Now, could we get a burst of “The Super Bowl Shuffle”? (Yes.) The drab, dispiritingly paced “Thunder Force” may work as wallpaper in other ways, depending on the moment and your needs. With Bobby Cannavale, Pom Klementieff, Kevin Dunn, Melissa Leo and Jason Bateman as “The Crab.” 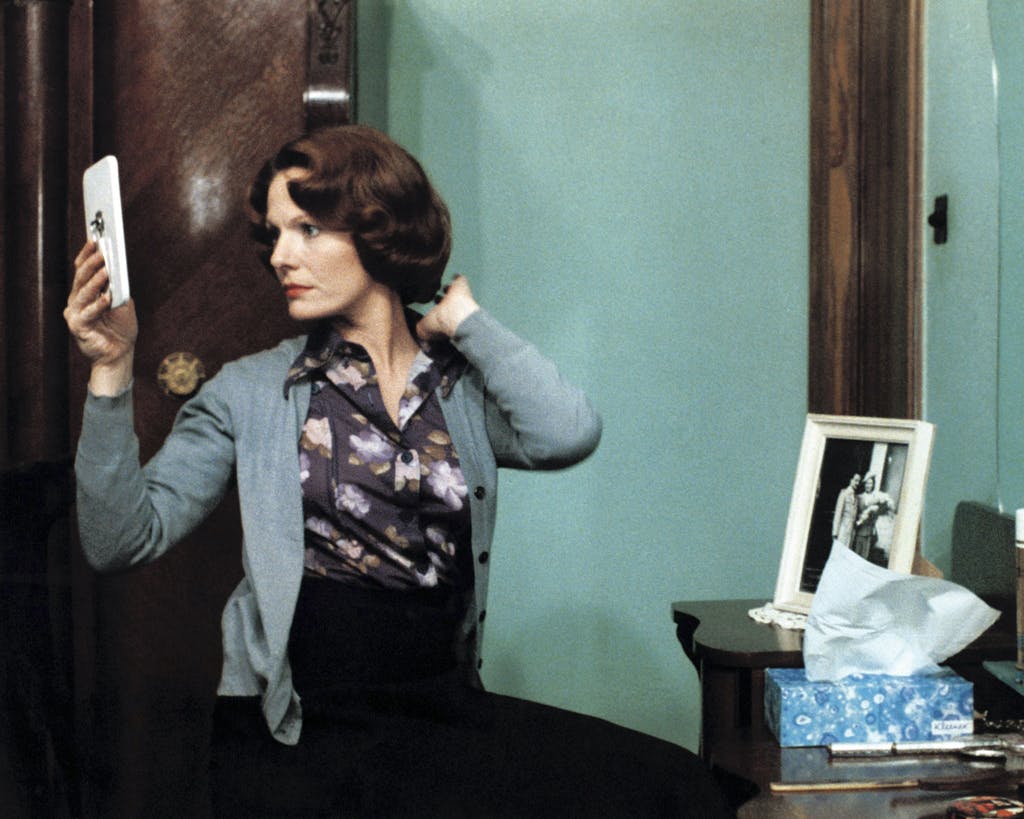 The Siskel Film Center’s Talking Pictures lecture series features the second of Jennifer Reeder’s selections for “Persistent Resistance: Unknowable Women In Film.” (Coming up: Agnès Varda’s “Vagabond.”) The Chicago filmmaker and educator will discuss Chantal Akerman’s methodical, chilling masterpiece “Jeanne Dielman, 23, quai du Commerce, 1080 Bruxelles,” following the clockwork routines of a Belgian housewife, observed in near-real time. “It observes the woman in a loving and generous way, doing the things she has to do every day,” actress Delphine Seyrig said of her character. “The way she cooks, the way she stands over a sink. It has turned out to be quite unbearable to watch. Nobody has really had to watch three-and-a-half hours of housewife-ing before. It is a very important film. We went very far with the details of the character. I hate to feel ugly, and I did feel ugly. She was so trapped, it was like being in jail.” Advance rental sources are listed here. Tuesday, April 13, 6pm.

“History is Made At Night”

Aside from exhaling one of the greatest titles of all time, Frank Borzage’s sublime, dizzy romantic comedy-film noir-melodrama-miracle play, “History Is Made at Night” (1937), set in Paris and Manhattan, contains some of the most jaw-dropping, agile shifts of tone I’ve ever seen within classical Hollywood story construction. I’ve always been shocked to revisit this tip-top among favorite films and find that its absurdities and peaks of emotion remain ever-effervescent: this digital restoration is dizzying revelation: visually, it’s a lost, elevated world far from the beatdown editions that existed until now, even on 35mm.

Shipbuilder Bruce Vail (Colin Clive, of louche lapels and simian lope) is pathologically jealous of his wife (Jean Arthur) and plots to prevent a divorce; the plotting leads her into the arms of another man, Paul, (Charles Boyer) and cantilevered contrivance prevents the newfound pair from sharing more than a single night together, heavy with promise. It would be criminal to describe the sweet reveal about one character’s identity, but I’m fond of any movie that has a character coo casually, “The reason I kidnapped you…”

Boyer and Arthur seduce as adults who play and burble in almost gnomic iterations: “Ask him to ask me to dance”; “I’ve told you what I couldn’t tell you”; “Ask him not to ask me.” Paul’s cohort Cesare (Leo Carrillo) and his pidgin malapropisms feel antiquated until you recognize the almost Zen sense/nonsense of the bulk of his banter: “It’s better late than sometime, eh?” But these two romantics, willing to give all for love are beautifully embodied by Boyer and Arthur, especially Arthur, angelically agleam, an actress who seems always a breath or a giggle away from sudden joy or mere transcendence. Extras include a 1958 audio interview with Borzage and an interview with critic Farran Smith Nehme about the director’s obsession with romantic love. Criterion, $40. Streaming on the Criterion Channel.