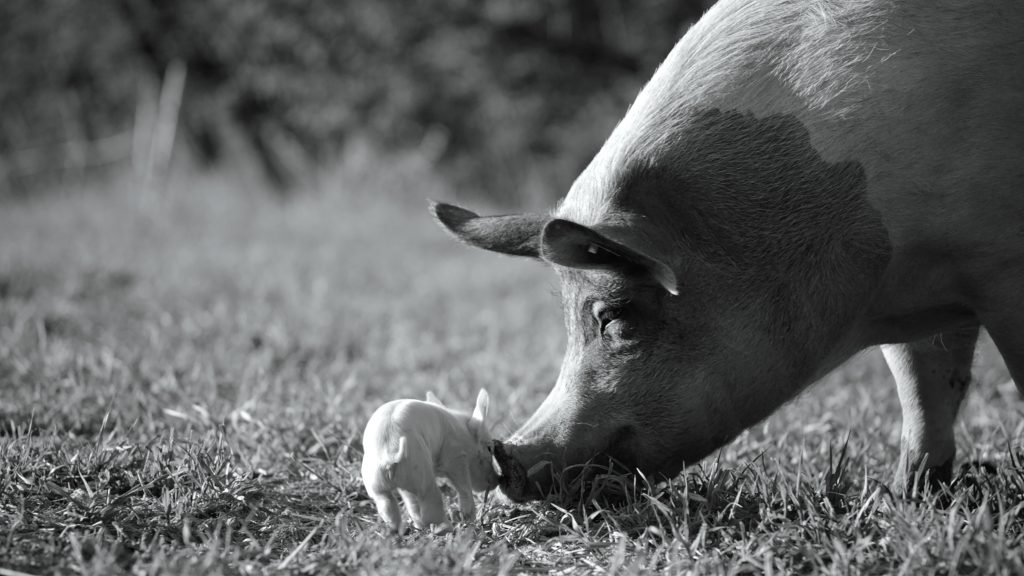 Gunda and one of her piglets.

Kossakovsky’s documentaries include 2002’s “Tishe!” (Hush), a documentary of dour simplicity, catching moments shot across the course of a year of a small sweep of the street below his St. Petersburg apartment. Intention; observation; duration; distillation. Documentary essence.

Before the power of his new film, “Gunda,” his fevered, fervent work includes glories like “¡Vivan las Antipodas!” (2011), one of the last decade’s most dynamic documentaries, a richly detailed, ruddy pill that makes unlikely connections on our planet, where Kossakovsky aligns locales as if sticking poles through the earth itself. Simmering Shanghai opposes rural Argentina: engines of Chinese urban commerce roar while the most rustic of sunsets drapes the middle of nowhere while ranchers laugh at elusive jokes. Patagonia and a rugged lake area of Russia meet; New Zealand is shot through to Spain; Botswana connects to Hawaii. The sweep is absurd and thrilling, and at times conveyed through the camera literally turning itself upside down and sideways.

The child of the former Soviet Union sketched “Ten Rules For Documentary Filmmaking,” which aligns in plainer speech with Werner Herzog’s gnomic “Minnesota Declaration”: “Don’t film if you want to say something—just say it or write it. Film only if you want to show something, or you want people to see something. This concerns both the film as a whole and every single shot within the film.” Kossakovsky wrote, “You need your brain both before and after filming, but don’t use your brain during filming. Just film using your instinct and intuition.”

“Where The Condors Fly,” a documentary on the making of “¡Vivan las Antipodas!” is an eye-popping snapshot of the Russian master’s filmmaking and personal habits, with glimpses of him Skyping from bed, crumpled into a mass under the sheets and crawling around as he sets up shots, self-operating jib arms and gyro mounts, davening behind camera, offering offhand impatience: “Good is not enough! I just want people happy for two hours.”

Through a windshield, he observes a picturesque passerby on a muddy road: “This is cinema. But not good enough for my film! There are too many films. If you must make something, it must be more than film!” But why? “I fucking must do it, that’s how it is.”

But there are successes: “Dogs do it for me, wind goes in the right direction, everything helps me.”

What has he been thinking in the decades of work while he dreamt and eventually fashioned his earthy masterpiece, “Gunda”? The rumpled man brought to tears by his own work answers: “Endless beauty.”

Wintonick told me of another dream project that the Russian explained to him, its pitch and proposition taking the smallest parcel of a napkin on the table before he and Viktor Aleksandrovich Kossakovsky. A three-letter pitch, a pitch for a submersion into the essence of life: “H. 2. 0.”

That was “Aquarela” (2019), globe-strapping again and shot in a high-frame-rate process of ninety-six-frames-per-second, of the sort that was spoiled for a larger market by Peter Jackson’s “Hobbit.” Kossakovsky coursed sea and brook, the confidence of rural idiots driving atop frozen lakes, assuming it will forever hold the weight even in a warming world, the cracking of ice, the calving of frozen massifs, beauty that shears majestically, violently into tragedy: a water world, not a people planet, white and blue and wet and nerve-wracking and destruction-wreaking. He mostly did away with words, applying intermittent bursts of metal by Finnish symphonic metal band Apocalyptica to his foreboding, aching portrait of life’s most basic essence. 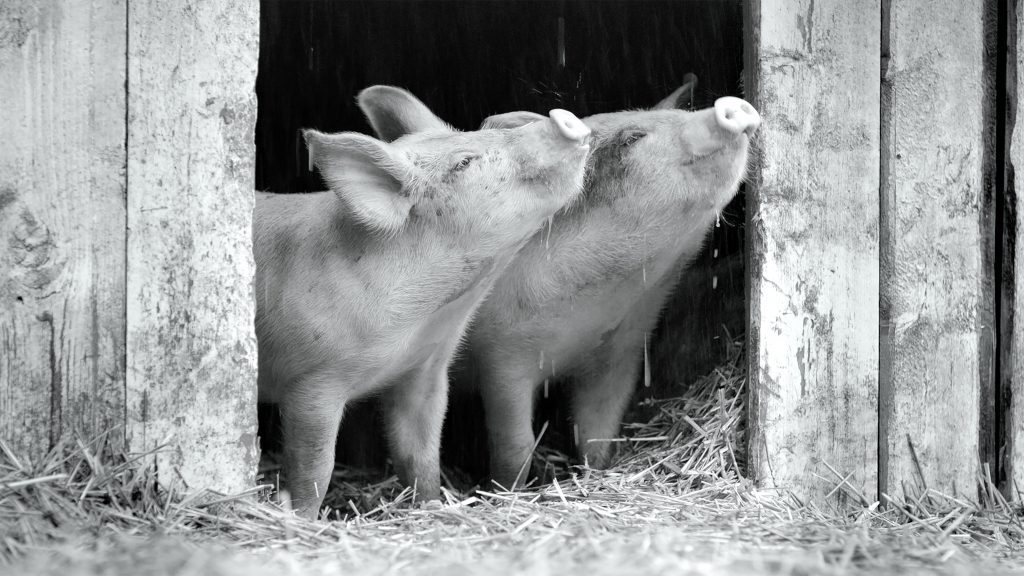 “Story is important for documentary,” he wrote in his conversational manifesto, “but perception is even more important. Think, first, what the viewers will feel while seeing your shots. Then, form a dramatic structure of your film using the changes to their feelings.”

And now “Gunda” and Gunda: the sow. Kossakovsky elevates the levels of his empathy machine while returning to confines. He contrives the textured story of field and the farm and the barn: seriously big pig, her newborn, soon thriving brood; waves of glaring yet cold-eyed cattle, the glory of a curious and curiously mobile one-legged chicken. There’s a purity in the results of “Gunda” that is parallel to that provided by Werner Herzog’s gimlet eye: look into nature, and let nature look back at me. (No abyss, this.)

“I have always wanted to make a film about the creatures with whom we share the earth, a film about animals as living, feeling beings in their own right,” Kossakovsky wrote for the release of “Gunda,” which is both monochromatic splendor and elemental sensation. “I wanted to make a film without patronizing or humanizing them, without any sentimentality, and without vegan propaganda. As the film I had in mind is not about dolphins, elephants, pandas or other cute animals we love to love, it was impossible to finance. I tried for almost three decades until I finally met [a Norwegian producer] who took the risk… We were unbelievably lucky to meet Gunda in the Norwegian countryside on the very first day of our research trip.” 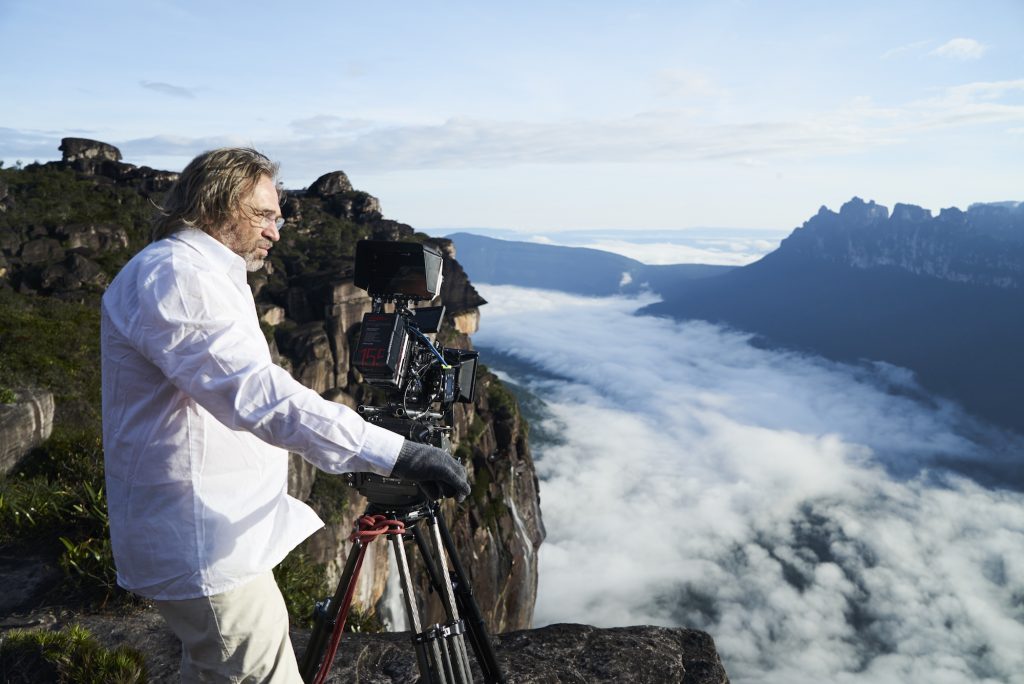 At the very start, we see Gunda and her litter that pops, ready and eager to suckle. Kossakovsky observes a farm made by human hand but without humans, only in evidence, not presence, tracking animals up close at their scale and pace with no rush, no worry in this world. Go with instinct, mother pig. He’s long thought this through, the swirl of this impassioned project. Unseen digital cameras encircle field and farm, but move with the elegance of dance in concert with its subjects. Light dabbles and stipples the fauna and collaborates with field and foliage, often in shallow focus in silvery and precise images. Layer upon layer of sound provides “musical” accompaniment, a dream of nature. (The dense, even narcotic sound design is by Alexandr Dudarev.)

Each aspect of “Gunda”’s is constructed yet expressive, pressing the animals upon us in a microcosmic land beyond time in a modest ninety-three minutes that still suggests an eternity. Dolly shots at ground level, in close, emphatic and elegant, quietly dazzle, camera in splendid motion, simplest sight and sound ingeniously orchestrated. “I want people to see these animals as sentient beings and to encourage them to think about the possibility of their consciousness and selfhood,” writes Kossakovsky.

He looks into their eyes and spies fate, but what do the pigs and chickens and cows find?

Fate, too. “Gunda” is gentle, but spiked with the despair of existence. Confusion, finally, reigns, no matter how much instinct or patterning fashions their world; ours. The man who wears white knows.