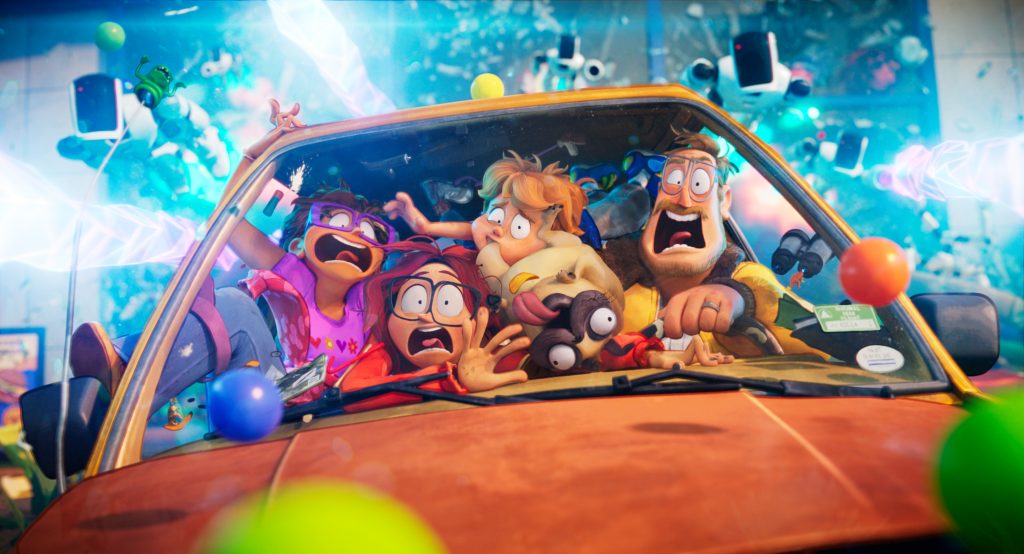 “The Mitchells vs. The Machines”

Sony Animation production “The Mitchells vs. The Machines” (a meh title for a fine family film shot as super-meh “Connected”), took the Netflix route for a worldwide release on April 30. The “Fury Road”-paced mix of the “Vacation” movies and the vast post-Apocalyptic survival genre is directed by Michael Rianda, written by Rianda and Jeff Rowe, produced by Phil Lord and Christopher Miller. Lord and Miller’s steady hands are evident, with the style and pacing and unstoppable comedy very much in the smart, hyper-accelerated style of their productions, “The Lego Movie” and “Spider-Man: Into the Spider-verse.” So much to see, so much to miss, so much to catch on a second go-round, which I expect will be just as genially convulsing as the first.

Field of Vision premieres “Utuqaq,” the latest short by gifted international filmmaker Iva Radivojevic. An adept of image, sound and editing, Radivojevic follows four researchers on an expedition to drill ice cores in subzero temperatures; the star, as it should be, is ever-shifting Arctic ice. The haunting, taunting imagery is narrated in Kalaallisut (West Greenlandic) by Aviaja Lyberth. The twenty-seven-minute short is embedded here.

AMC Theaters are showcasing their Dolby rooms with a 4K edition of Edgar Wright’s “Scott Pilgrim Vs. The World,” that was completed in 2020 for the tenth anniversary of the release of his third feature.

1-2-3-4! Starting April 30, #ScottPilgrim is levelling up onto #DolbyCinema screens! Get tickets now to see #ScottPilgrim exclusively in Dolby Cinema at @amctheatres: https://t.co/Jiy4OoY6vQ pic.twitter.com/jaDImCQert

“There’s a feeling you’re watching this wish-fulfillment daydream,” Wright told me in 2010. “And also I tried to make the fights work like production numbers in old MGM musicals, which is bust out into the big song-and-dance routine and then the story continues through the fight and then they go back to dialogue at the end. It’s just about the technique of expression rather than the fact that, ‘Holy shit, he just killed a man!'” He and Michael Cera laugh and Wright’s hair falls into his eyes. “That was definitely something that when reading the first book, and there’s a fight at the end, the biggest challenge in adapting was, ‘Wow, how do you pull off that tone on the big screen?’ My approach was to just present it as matter-of-fact.” Kubrick said you have seven minutes to set a world, and of ” Groundhog Day,” Harold Ramis said, man, if we explained it, there was some kind of curse, he’d lost a bet, it would stink. “That’s true,” says Cera, nodding. “Yeah, absolutely,” says Wright. “It came up. We did about five test screenings with this film, and after the first test screening, it came up, we have to explain the fights. And I was like, that would just kill us stone dead if we did. When we did this in ‘Shaun of the Dead,’ it’s the same thing like in ‘Night of the Living Dead,’ the original George Romero film, they never explain why the zombies are there. Because you figure the people on the ground, with those kind of chaotic news reports, they don’t know, either, so why should the audience? It’s more scary, the not knowing. It just happened.”

Before “F9” hurtles from the old world into the new one in theaters June 25, Universal’s got a unique come-back-to-the-movies-please-yes-please-please “Fast Fridays” promotion, with eight weeks of free screenings at hundreds of theaters of every previous “Furious” picture reminding you of the ups and downs of one of the world’s most successful families. More details here. “The ‘Fast’ films are all about family, and Universal wanted to find a way to thank our huge family of ‘Fast’ fans around the country for their passion and loyalty over the past 20 years,” Jim Orr, Universal’s president of domestic theatrical distribution is quoted in a release. “We’re grateful to our theater partners for their help in making this screening series possible and we are delighted to welcome audiences back to theaters to experience the wild ‘Fast‘ ride all over again. And we cannot wait to blow everyone’s minds with the release of ‘F9’ on June 25.”

“Anybody who has a phone can make a movie. The downside is nobody can make a living.” Writer-director Paul Schrader, whose latest film, “The Card Counter” (with Oscar Isaac, Tiffany Haddish, Tye Sheridan and Willem Dafoe) will be released this year by Focus Features, is exceptional at many things, including popping off on Facebook. (One late-night political emanation involving the former president and “John Brown’s Body” led to a morning-after visit to his apartment by the FBI.) A recent reflection on changing economics of the feature film form in the present streaming age prompted the New Yorker’s Richard Brody to give his friend Paul a jingle. “My friend film critic Richard Brody asked if we could have a conversation on the record. I said, sure, why not? I blink and he’s published this tome,” Schrader posted in reaction. Brody asks if a lack of resources for filmmakers today offers a kind of “freedom.” “Well, there’s a lot of freedom. The film that I took forty-two days to make when I started I now make in twenty. ‘First Reformed’ was twenty. My new film, ‘The Card Counter,’ is twenty,” Schrader tells Brody, his rasp readily imaginable. “And the quality is the same. You just move much, much faster. Everything is cheaper. Everything is faster. So the upside is that movies that could not afford to be made are now being made. Anybody can make a movie. Anybody who has a phone can make a movie. The downside is, although anybody can make a movie, nobody can make a living. Because in the sixties, if you got to make a movie, you made a living. You got a salary. Today, you can make a movie without getting a salary, and you can make a five-million-dollar movie for fifty thousand and lose fifty thousand. And so, so many of these young filmmakers are… they’re making films they weren’t allowed to make before, but they’re not making a living, and they’re not getting the kind of distribution… I mean, you see it all the time, films that are just being thrown out the car window hoping somebody finds them and watches them.”

Which gives film critics a role again, one hopes.

Yeah, if they can find somebody to pay them.