The dour, serene, dapper, disheveled cornucopia of moments in Roy Andersson’s “About Endlessness” is presumed by some to comprise the final feature from the seventy-nine-year-old Swedish master behind “Songs from the Second Floor” (2000) and “A Pigeon Sat On A Branch Reflecting On Existence” (2014). The 2020 documentary “Being A Human Person” illuminates depression and drink, his exacting process and a deep wariness: one moment finds him sat, as if for good, cane by his side, in the midst of Goya’s “The Black Paintings” in a Madrid museum, the Museo del Prado. “There are so many sides—beautiful, brutal sides—to being a human being,” he reflects in their face. (Goya is a much sharper comparison than to Monty Python, which is common in commentary about Andersson.)

The minimalist melancholy of “About Endlessness” is essential Andersson, plus more, even at a brief seventy-six-minute runtime. The tableau-style filmmaking of his sketched-in work effaces the depth of his craft, where the planes and angles of his naturalistic yet set-bound world are calibrated with computers, hand improvements and then scene-shop exactitude for maximal precision and premium comic result. Alison Willmore has placed his work as precisely and succinctly as anything I have read (or could write without eons of revision): “Andersson’s films tend to get labeled as black comedies, and while that speaks to their ferocious deadpan, it doesn’t begin to convey how strange and singular and spectacular they also are. The four features he has made this millennium take place in a reality that feels purgatorial—the colors are muted, the cast members are given an exaggerated pallor, and the backdrops are intricate sets observed by a camera that’s often static. While there are characters with ongoing arcs, most sequences exist as standalone vignettes.” Andersson’s questions about faith and existence persist, and his tribute to the mastery of great artistic works in centuries that came before sings loudly, too. He says what he has to say and no more and no more is required. Andersson’s despair is as heartening as deepest love. Flight is taken. “About Endlessness” is available through the Siskel Film Center and begins via Facets and the Music Box, starting Friday, May 7.

The third film adaptation of Alfred Döblin’s 1929 novel “Berlin Alexanderplatz” is a three-hour mouse next to Rainer Werner Fassbinder’s 1980, fifteen-hour miniseries, but roars with contemporary verve. A widescreen story of an undocumented African immigrant hoping to make his way in the neon-drenched metropolis, but jobless, stateless, is soon drawn into the ineluctable, inevitable netherworld of crime. “Berlin Alexanderplatz,” from Kino Lorber, via Music Box Virtual Cinema, starting Friday, May 7. 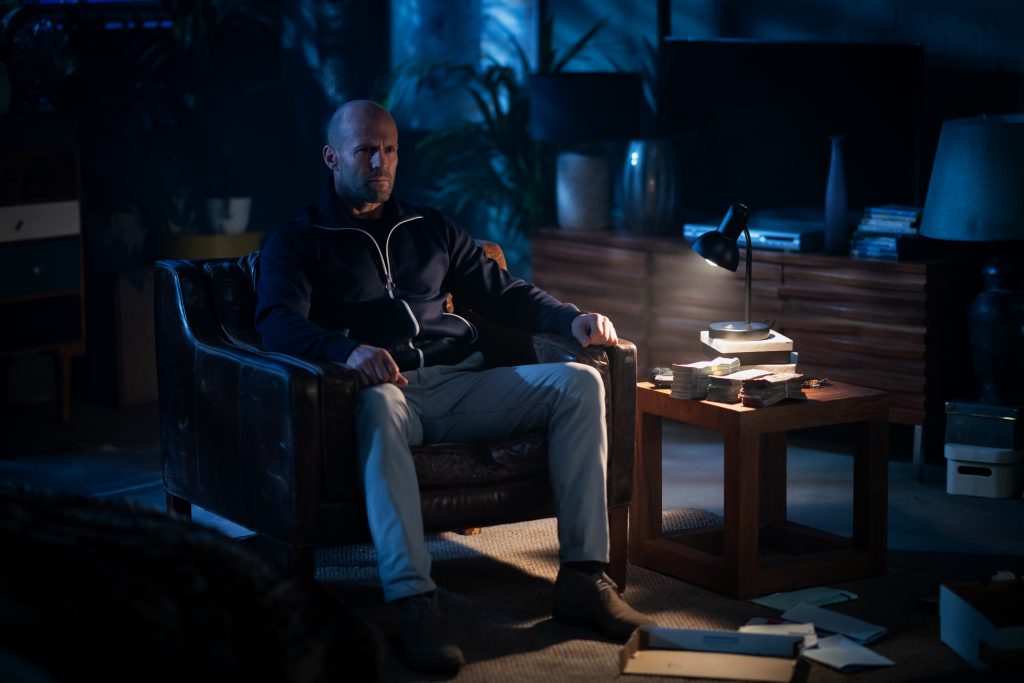 Jason Statham in “Wrath of Man”

Guy Ritchie’s “The Wrath of Man” returns to the world of hard men, crunchy verbals and spiv togs, familiar from the films of Matthew Vaughn, erm, the early movies of Ritchie himself. It’s under review embargo, so here’s MGM’s summary of the remake of the 2004 French film “Le Convoyeur” (Cash Truck), directed by Nicolas Boukhrief. “H, a mysterious and wild-eyed new cash truck security guard (Jason Statham) surprises his coworkers during a heist in which he unexpectedly unleashes precision skills. The crew is left wondering who he is and where he came from. Soon, the marksman’s ultimate motive becomes clear as he takes dramatic and irrevocable steps to settle a score. Statham is flanked by Holt McCallany (Bullet), Jeffrey Donovan (Jackson), Josh Hartnett (Boy Sweat Dave), Eddie Marsan and Scott Eastwood. “The Wrath of Man” opens in theaters, Friday, May 7.

Ivo van Aart’s Dutch revenge satire “The Columnist” picks apart social media obsession as a miffed columnist (Katja Herbers, “Westworld”) “is plagued day and night with death threats and vitriol from internet trolls, with the comments arriving in droves, as she obsesses over every one of them to avoid her looming book deadlines. However, when the man next door joins in on the digital harassment, this kindhearted single mother becomes a ruthless serial killer, and, her writing is improved—even as Anna (Claire Porro), her rebellious teenage daughter, conducts a high school campaign for free speech.” A tempting synopsis, but then we’re sold: “Equipped with hate in her heart and a bag full of gardening tools, Femke throws morals and caution to the wind in her bloody quest to give online bullies what they deserve.” “The Columnist,” virtually via Facets, starting Friday, May 7.

“The Big One: Heist Films At the Music Box,” pulls it off on Southport May 7-13, including Jules Dassin’s “Rififi” in a new 4K restoration; twentieth-anniversary 35mm screenings of Steven Soderbergh’s “Ocean’s Eleven”; Steve McQueen’s “Widows” and Michael Mann’s 1995 “Heat” lights up the big screen at the Music Box (on DCP).

“Heat” is a love story, a story about what men will die for and what they believe they live for. It is about the sordid bloom of the sprawl called Los Angeles, the color of dusk and twilight across an unnaturally brilliant sanguine desert and a sadness you would not want to put a name to for fear of lacking the language. There are cops and there are crooks and there are the women they try to love and the women who try to love them back. There are also things called good and evil, but no one truly ever talks about them. They move forward, letting their actions represent their life-learned morality. Mostly there are the pale shadows that flicker in Southern California just before dark: are we as real as the shimmering light, are we as unreal as the plans we make for ourselves and the steps we take to realize them? As Mann’s large cast of primary characters-workaholics all-cling desperately to whatever sense of purpose they’ve managed to construct for their actions, his telling is pellucid, lapidary, patient, unapologetic. This is the way we live today, Mann convincingly argues, as well as lie, cry, fight, love, fuck, fuck up, say hello when we shouldn’t and fail to say good-bye when we should. Mann surveys the damage, and while the pictures are pretty, no one stops to drink them in. “The Big One: Heist Films At the Music Box,” May 7-13.

Amazon Prime debuts “The Boy From Medellín,” by Oscar-nominated filmmaker Matthew Heineman (“Cartel Land,” “City of Ghosts,” “A Private War”), an up-close portrait of J Balvin, the “Prince of Reggaeton,” one of the biggest international music superstars in the week leading up to a sold-out stadium show in his hometown of Medellín, Colombia. “But as the performance draws ever closer,” prompts the Amazon release, “the streets explode with growing political unrest, forcing the Latin Grammy-winning musician to wrestle with his responsibility as an artist to his country and his legions of fans around the globe. As the public pressure of the approaching concert heightens, behind the scenes Balvin also continues to deal with the anxiety and depression that has plagued him for years.”

In the Siskel Film Center’s Talking Pictures lecture series, Sergio Mims (Film 50 2019) continues his “Images of the Black Male in American Cinema” with Norman Jewison’s Sidney Poitier-starring 1967 groundbreaker, “In The Heat of the Night.” Monday, May 10, via Siskel.

The Atlantic goes long on how the moviegoing experience cannot survive post-pandemic, if decades of corporate contempt toward ticket-buyers persists. “It might seem obvious, but theaters depend on frequent moviegoers, defined as those who see a movie at least once a month,” reports Shirley Li. “In the U.S. and Canada in 2019, they represented about eleven percent of the population, yet accounted for forty-seven percent of all tickets sold. Chains with loyalty programs—AMC Stubs or Cinemark Movie Club—that offer rewards for regular moviegoers will ‘reignite,'” Mark Zoradi, CEO of the global theater chain Cinemark tells Li. “Doing this subscription program was very important, and we’ve stepped up our digital and social-marketing efforts… We think of ourselves not as a theater exhibitor owner, [but] as a very modern retailer, like a Target or a Starbucks.” To that end, executives want to change the way you think about theaters; they want frequent moviegoing to be the norm, not the habit of a dedicated minority. In the post-pandemic era, they see Hollywood’s backlog of blockbusters and audiences’ pent-up need to leave home as unique advantages. Therefore they consider other social settings, not streaming services, as their primary business rivals going forward. “I think we’re an out-of-home experience competing with bars and restaurants and nightclubs,” Alamo Drafthouse’s Tim League tells Li. “Folks who watch a lot of streaming also go out to theaters a lot, and I feel comfortable that that’s not going to be the end of cinema.”