Theaters are opening, capacity increasing, and the choices of what to watch, onscreen, in virtual cinema bookings, streaming and online, pile up. Barry Jenkins’ epic “The Underground Railroad” lands on Amazon at its full, valorous ten-hour weight; a restoration of Melvin van Peebles’ no-longer-rare debut feature “The Story of A Three-Day Pass” illuminates the screen at the Music Box; and “Saw” begets “Spiral,” a sideways sequel starring Chris Rock and Sam Jackson; and Timur Bekmambetov’s digital nightmare “Profile” makes the infinitesimal fateful for a twentysomething journalist and Guy Ritchie returns to his roots with the “Toff Guy Production,” “Wrath of Man.” Plus: the launch of Oak Park-based Art Verité and two online takes on the next chunk of the future announced by the keepers of the Marvel Cinematic Universe.

“Just look out at the sides as you speed through,” the train conductor says as his prospective passenger hesitates, “and you’ll see the true face of America.” “The Underground Railroad” is May’s film feature: “The magnificent, magical, brutal and tender ‘The Underground Railroad‘ is less crafted and shaped than it is gently hewn. It is about a dream of escape, precipitated by a literal yet fantasticated railway, and the journeys that dream permits, into a pre-Civil War America of the imagination, but it is also a river, comprised of streams and rivulets of generations of blood. It takes place ‘then,’ but also now, and forever. Sometimes a waking nightmare, it becomes a futurism of dreams, a Möbius strip of hope. Physical passages and eras blend without fuss, with sublime ease.” Barry Jenkins’ ten-hour-plus intimate epic is an adaptation of Colson Whitehead’s National Book Award and Pulitzer Prize-winning novel,  Read the review here. Streaming on Amazon Prime from May 14. 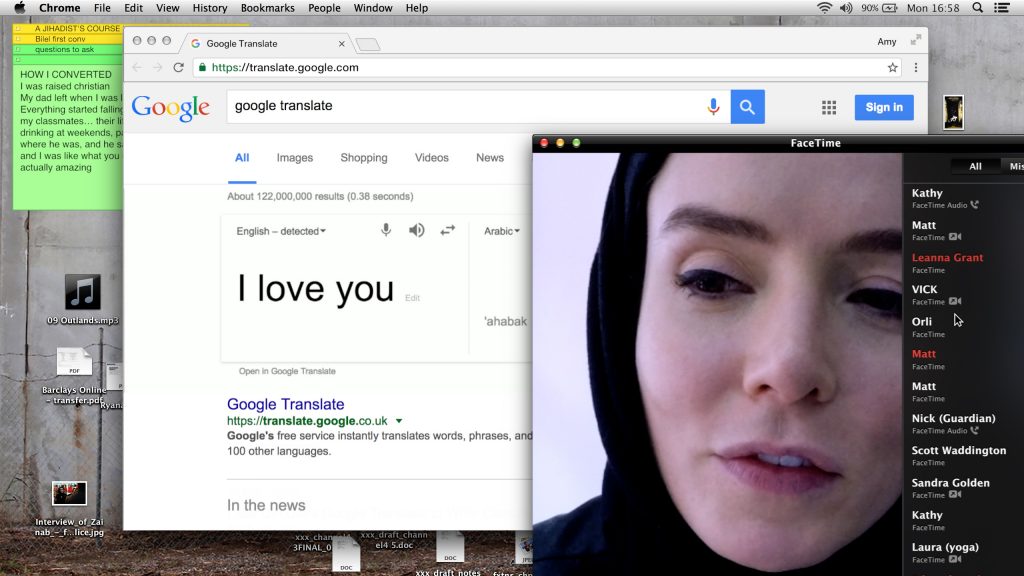 “Profile” premiered at the Berlin Film Festival in 2018, but its compact tale of the seduction of a London journalist calling herself “Melody Nelson” as she hopes to recruit an online Isis recruiter still packs melodramatic punch and swarms with detail. Russian-Kazakh director-writer Timur Bekmambetov has produced uncanny thrillers that take place both within the confines and world reach of a computer screen, including the dare-glitch project of “Unfriended” and the stark web of “Searching,” which he calls “Screenlife.” Previewing “Profile” on a laptop while watching the journo’s laptop in full screen, with the same browser and chimes and beeps from websites and the computer made for an uncanny simulacrum, although the earlier pictures played in an expansive fashion on the big screen. The effect is chilly and thrilling in its fierce commonplace, the rapid-fire of breadcrumbs that we, the movie and “Melody” accrue in a given session, with only the occasional slip in the matrix: misspellings like “Your Adress” on a Facebook sign-up screen. (The ache of a squeaky chair as she taps; the rush of trains and sounds of humans outside the apartment, outside the frame, are portioned out judiciously.) Moments of formal headrush are matched by emotional entanglement as her life outside the screen threatens to collapse as her story catches fire. She breaks a mass of protocol with nearly every breath, each keystroke. Infinitesimal details could change her life, or potential death. “Profile” opens Friday, May 14.

Melvin Van Peebles’ first feature, “The Story of A Three-Day Pass” (1967), coming four long years before his incendiary breakthrough “Sweet Sweetback’s Baadasssss Song” (1971) was a stylistically audacious film in the path of the French New Wave: an African-American soldier (Harry Baird) stationed in France is promoted and given a three-day leave to Paris, where he’s swept up in a romance with a white woman (Nicole Berger). Little seen in recent years, “Three-Day Pass” is shown in a 4K restoration. Opens Friday, May 14 at the Music Box.

“Spiral: From The Book of Saw” is the latest variation on  the “Saw” series, reportedly fashioned from an unlikely pitch thrown out by Chris Rock, who plays a detective “working in the shadow of his father, an esteemed police veteran” (Samuel L. Jackson) and with a rookie partner (Max Minghella) who “take charge of a grisly investigation into murders that are eerily reminiscent of the city’s gruesome past.” In theaters Friday, May 14.

Marcia Jarmel and Ken Schneider’s “Los Hermanos (The Brothers)” documents virtuoso Cuban-born musicians in “a story of family separation, hopeful reunion, and future uncertainty [that] resounds with the ongoing relationship” between Cuba and the United States. Music Box Direct, starting Friday, May 14.

Guy Ritchie’s twelfth feature, “Wrath of Man,” “A Toff Guy Production,” is another of those perennial Ritchie return-to-roots movies in the vein of “Lock, Stock and Two Smoking Barrels” and “Snatch,” fixing on bunches of criminal men (and occasional women) hoping to fix fate via violence and “verbals.” “Wrath” opens oddly and with faux-spunky dialogue—”Did he survive the hostile territory of Hot Betty and the menopausal MILFs?”—but as chapters of the movie break chronology and perspectives on an armored car heist gone wrong proliferate, the meanness of the characters is purged by the lean rage of Jason Statham’s cool customer. What was simple paint-by-numbness takes on Statham’s compact grace—trim, stylish, steely—as he strides through fallen worlds. (It’s an icy reduction of “Heat.”) The look of the picture simplifies, too, and the doomy doings share the inexorability of the anxiety-inducing sawing, awwwwwing and cawing of Chris Benstead’s strings-heavy score and clean sounds like the warm jangle of bullet castings ejecting, shot by shot. Sordid and violent, “Wrath of Man” is a proper parade ground made for Statham to promenade within. With Holt McCallany, Jeffrey Donovan, Josh Hartnett, Eddie Marsan, Scott Eastwood.

Oak Park-based Art Verité launches with a small but growing library of films focused on art, artists and their work for collectors, universities, lawyers, museum and insurance companies around the world. (Founder Jane CH Jacob has led Jacob Fine Art for many years as well as a NYC symposium on art fraud.) The library intends to address knowledge gaps in art law and art business and to “challenge the status quo in the art world.” Of the Art Vérité films, Jacob says in a release, “We believe that by bringing together all of the best authorities in the fields of art and the law that we can change the way that the rights of artists and the integrity of art history are protected.” Find more about the ten films to date and the subscription platform here.

The recent preview of Marvel movies to come, celebrating a return to in-person moviegoing from the company behind the Disney Plus juggernaut stoked enthusiasm online, and one of the warmest reflections came from Jemele Hill, a contributing writer to The Atlantic:

At this point, I think the only thing capable of bringing us all together are Marvel movies. It’s one of the few things that actually makes me miss being around people. https://t.co/MVxeZvFQIe

A media pundit on Twitter (who will not be named) posted a contrary view, which they took down only moments after posting: “If you want a vision of the future, imagine four Marvel Cinematic Universe films and six Disney+ miniseries every year – forever.” Yikes!