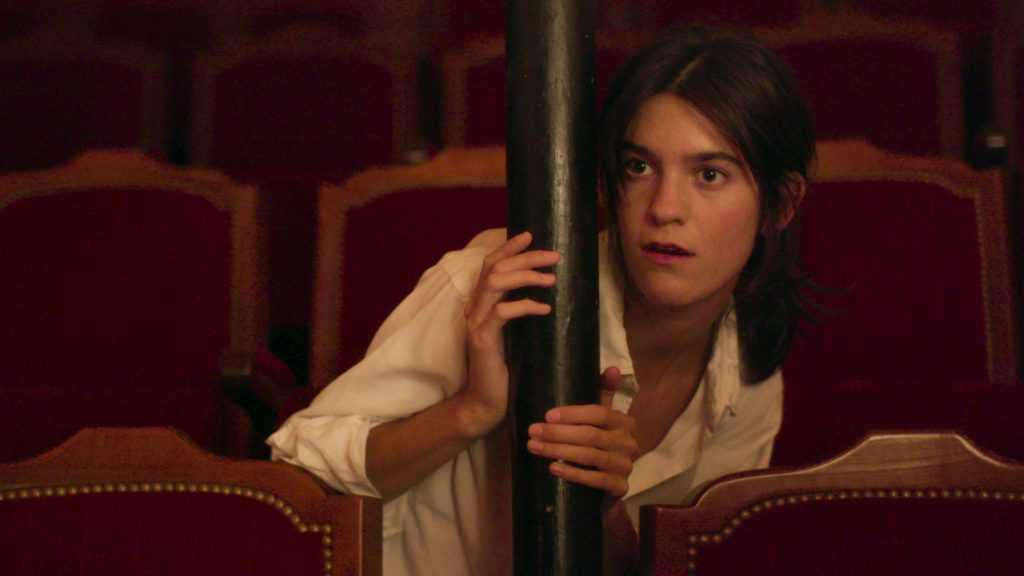 The Logan Theatre joins the screens alight in Chicago on Friday. Theatrical grosses for the second weekend of May weren’t impressive: theaters are increasing capacity, but there’s still a reluctance: either to the untested waters of moviegoing, or to the pictures on wider release. (Then again, there’s the sudden news of AT&T throwing out WarnerMedia in a many-billion-dollar spinoff-merger with Discovery Networks that has the industry reeling.) Barry Jenkins’ ten-hour “The Underground Railroad” (Amazon Prime) remains the deepest dive of May, a fount of sorrow and beauty being discussed as a masterpiece, and there’s more about it below. (Newcity’s extended review is here.) Zack Snyder’s “Army of the Dead” arrives on Netflix, as well as adolescence tale “Spring Blossom,” a French director-starring role by debut filmmaker Suzanne Lindon via Music Box Direct. Two French classics arrive on Blu-ray, Olivier Assayas’ “Irma Vep” and Jacques Doillon’s “Ponette,” and one of Chicago’s best film writers memorably faces the stardom of Angelina Jolie in HBO Max’s “Those Who Wish Me Dead.” Plus the four features of  Palestinian filmmaker Elia Suleiman will stream for free in the U.S. for ten days.

Familiar territory, at least in a century of Gallic films, Suzanne Lindon’s brisk wisp, the naturalistic “Spring Blossom” (Seize Printemps), posits a sixteen-year-old student, Suzanne (Lindon), who is attracted to a thirty-five-year-old actor she sights outside a theater on her way to school: Voilà, obsession. (Lindon reportedly wrote the script at age fifteen.) Atmosphere and moment-to-moment presence within comfortably bourgeois Montmartre-centered settings are what matter to the then-twenty-year-old writer-director.

A brief connection is made, discarded, and the primary business of being a sixteen-year-old among sixteen-year-olds again takes hold. Lindon, the daughter of French movie mainstays Vincent Lindon and Sandrine Kiberlain, fills her widescreen frames in with effortless simplicity in a movie barely over seventy minutes long. Lindon also manages multiple literal musical passages in that brief running time, while demonstrating a keen eye for elemental gestural choreography between characters.

Did not make it to the theater to see the one-week run of Zack Snyder’s two-and-half-hour mercenary-heist-undead comedy-thriller “Army of the Dead,” which streams from Friday, May 21 on Netflix. Best observation from a reviewer who did comes from film writer Luke Y. Thompson, succinct on Twitter: “Zack Snyder movies about putting together a team to open a big metal box and fight a giant gray guy plus all the zombies he’s created: 2 for 2 this year.”

“Those Who Wish Me Dead” is an able contraption of contrivances and poses of sharp-ish action, suggesting that there could be a whole equal to its disparate pieces, with striking fractions of elemental radiance from Angelina Jolie besting the current-laden plot. I defer to Angelica Jade Bastién at Vulture for an apt, intent look at Jolie’s power: “It’s those green eyes, which can go from communicating anger to desire imperceptibly. It’s her famous pout, which can devastatingly unfurl vulgarities and compliments with equal aplomb… It’s her physicality, which is forceful in a way that belies the thinness of her frame, and the overwhelming burst of charisma she brings to the screen. Yet, for all her screen presence, Jolie doesn’t guarantee a good movie. For every film of hers I adore (like her directorial effort ‘By the Sea’), there are countless others that don’t rise to the level of her stardom or skill. It’s frustrating to see one of Hollywood’s most fascinating stars often cast in lackluster work. Which is why it was so thrilling to see her given a proper vehicle onscreen again.” In theaters and on HBO Max for twenty-four more days.

“The Gaze” and “The Underground Railroad”

“The historical record has systematically erased them, but even imagistically, there are very few portraits,” Barry Jenkins writes of the hour-long film he created with cinematographer James Laxton and composer Nicholas Britell alongside “The Underground Railroad.” “There are very few photos of our ancestors. Here I am with all these tools, all this equipment, all these people. And then there were all these wonderful actors and especially the background actors, our advisers who were literally giving my ancestors a body and voice. So in addition to making the show that was in front of me, I would sometimes stop filming the scenes and just turn the camera on our actors.” Stillness and swell: the film immerses and enraptures. “A few of those images have made it into the show, but we have hours of them. So I created this thing called “The Gaze.” Because every time I have a conversation like this, certainly not with you, I end up talking about the white gaze. Why has no one ever asked me about the Black gaze? I’ve got to make sure I’m not making this from the white gaze.”

Jenkins talks to Nikole Hannah-Jones of “The 1619 Project” at the Hollywood Reporter: “We’ve seen these images, unfortunately, of our ancestors lynched during Jim Crow. It’s always the aftermath and someone suspended above a crowd. Oftentimes these people were looking at us, the white gaze… there’s a certain brutality and horror in the fact that these people are so proud of what they’ve done. But I feel like we don’t get the other side of it. We haven’t seen what it’s like to suspend a man by his wrists and separate his flesh with the whip. It’s not just that the whip is hurting that man. It is doing things to his flesh… When we filmed it, it’s visual effects. There’s no blood, no fire, the guy’s in a harness — wonderful actor… Visual effects-wise, we could have taken it much farther. It’s onscreen for the briefest of moments… I wanted to give this man agency, because typically in these films, when these things happen, people are responding to acute trauma, they’re screaming in pain, or begging for their lives. In this case, he speaks to his fellow men and women who are forced to witness. He says, ‘No more masters, no more slaves.’ And then to the brutalizer, he says, ‘God damn you.’ I thought, ‘If I can just give this man some agency, maybe I can unearth something else in this moment that we aren’t often privy to, but I have to do it.'”

Jenkins talks about the responsibilities of historical image-making as well as of making raptures to the Los Angeles Times: “I didn’t want CGI for the trains and tunnels. It has to be real. I want the audience to see what I saw as a child. It’s so important that the actors can walk into a tunnel and they can get down on their knees and touch the rails. Can you imagine what my ancestors would have felt if they walked into one of these tunnels and they saw the track and the light approaching and a Black conductor shouting, ‘All aboard!’ It would have been mind-shattering. I wanted to create that.”

Palestinian filmmaker Elia Suleiman is making his filmography free online to U.S. audiences for ten days, beginning May 21. “His work is barely known here, which is an enormous shame given his major status in world cinema,” reports producer Marie Therese Guirgis. “He’s often compared to the great French filmmaker Jacques Tati. His films are cinematically ingenious, intellectually sophisticated, ideologically nuanced, often funny and moving, and just spectacularly smart and wonderful.”  Most of Suleiman’s films aren’t available on any streaming platform, but the Arab Film & Media Institute will stream his four features, “Chronicle of a Disappearance” (1996), “Divine Intervention” (2002), “The Time That Remains” (2008) and “It Must Be Heaven” (2019). Reservations here. 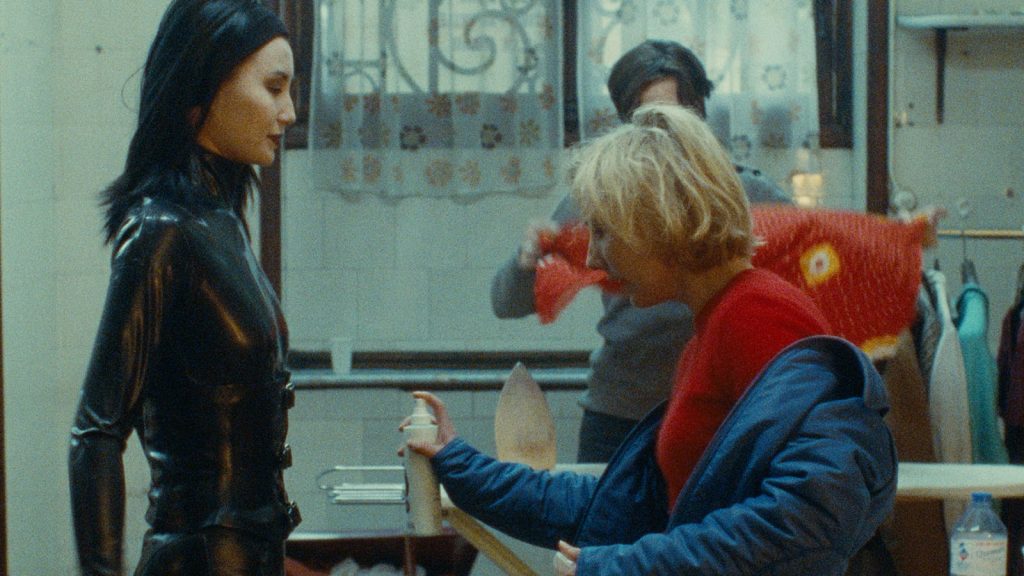 Cut-up and cacophony: Olivier Assayas’ “Irma Vep” (1996), new to Criterion Blu-ray, is breezy yet dense with detail, a punk-inflected meditation on film history as well as a bright comedy about work, lust and latex. Hong Kong’s Maggie Cheung plays Hong Kong’s Maggie Cheung, called to Paris by ill-faded film director Rene Vidal—Jean-Pierre Léaud, a veteran of many films by Truffaut, Rivette and Godard, who remains a mainstay of French cinema himself—who wants her to star in a modern-day remake of Louis Feuillade’s 1915 silent serial, “Les Vampires,” a favorite of the Surrealist movement to come. But Léaud, a troubled soul in his own life, plays a director who’s losing his mind (much as Rivette had a breakdown during a troubled period in the 1970s). Other members of the crew hover over nimble Maggie, such as the wonderful Nathalie Richard as a bisexual costumer who must keep Cheung’s latex catsuit limber and shiny. Assayas litters his script with asides about that now-lost mid-nineties, late-twentieth century era of filmmaking. He also layers the brisk collage with crisp slabs of pop music (Sonic Youth’s “Tunic (Song for Karen)”; Luna’s French-language cover of Serge Gainsbourg’s “Bonnie & Clyde.”) On one hand, “Irma Vep” is another installment in the perennial saga of monstrous egos and conflicting agendas on a film set. It’s also the swink-fwacch, swink-fwacch sound of latex as Cheung slinks dexterously through a corridor toward a jewelry robbery. By movie’s end, the players of all the backstage intrigue are the gang of bandits from “Les Vampires”—battling, bickering, hypnotized, hypnotizing—the film crew are the true vampires. This edition is a new 2K digital restoration to Assayas’ liking with 5.1 surround audio and includes a new interview with the writer-director; interviews and behind-the-scenes footage; “Musidora, the Tenth Muse” (2013), a documentary on the actor who originated the role of Irma Vep; “Les vampires: Hypnotic Eyes” (1916), the sixth episode in Feuillade’s silent serial; and “Cinema in the Present Tense,” a June 2020 address on the state of cinema by Assayas. Criterion Blu-ray; streaming on the Criterion Channel.

Jacques Doillon’s “Ponette” seems so small and then it is shattering beyond relief. “Ponette” aches with emotion. It’s a revelation, distressingly alive, great and gravid with grief. Four-year-old Victoire Thivisol received the best actress award at 1996’s Venice Film Festival for her performance as a child of utmost self-absorption. After the death of her mother in a car crash that occurs before the film begins, Ponette chooses to live in her own world, fashioning her own mythology from the information she is given. Thivisol embodies this overalls-wearing, wrist-in-a-cast, full-pout-mouthed believer with heartbreaking emotional authenticity. To a father’s blunt “Mommy is dead,” what more is there to say than “No! She’s flying with her magic mirror.” She is not obstinate. Simply, she believes, and patiently awaits her mother’s return. Doillon is patient as well, fashioning from many close-ups and a child’s natural impulses a transcendent portrait of sorrow and loss, of the bewilderment the world has to offer. His interest lies in the burn, confrontation, the aftermath. (The face, the shout, the slap.) There are other subtleties beyond Doillon’s loving regard for Thivisol, such as, in an early scene, leaving the hospital in a car with her father, we see the landscape rushing forward with the rear-view mirror revealing similar greenery spinning vertiginously away from us. In a field, a boy and a girl play clumsily at kisses and comforting. Ponette rages at her doll, then comforts it. She hears that her mother is with Jesus, then waits for the pair to visit. She waits. She waits. We watch, grateful, mesmerized, moved. (Sean Baker nodded to “Ponette” on Twitter recently: “If I had to name one feature film that was an influence on ‘The Florida Project’ above all others, it’s this film.”) Kino Classics Blu-ray, releases May 25.