The hot-weather sensation of early summer is the musical canvas of “In The Heights,” from director Jon M. Chu and writer-composer Lin-Manuel Miranda and writer Quiara Alegría Hudes on the big screen at the Music Box. A satisfying slow simmer marks the restored second feature of Korea’s Hong Sang-soo, “The Power Of Kangwon Province” and Thomas Morgan’s documentary “Tomorrow’s Hope” traces the aftereffects of Educare, a preschool education program on the South Side of Chicago. The Doc10 nonfiction showcase brings its ten-film array to the Davis Theater and the ChiTown drive-in; and the Onion City Experimental Film & Video Festival has both virtual and live events for its thirty-first unspooling.

Another feature held back by its studio in hopes of audiences getting a big-screen kick, like “A Quiet Place: Part II”: Warner didn’t go straight-to-streaming with the hot-weather hullabaloo of Jon M. Chu’s “In the Heights,” a full-on, widescreen musical at an ample 143 minutes, adapted by Quiara Alegría Hudes from the stage production written by Lin-Manuel Miranda and Hudes. (The movie also escaped multiple trash deals for earlier film adaptations, including one connected to the notorious Harvey Weinstein, famed for malicious interference.) With Anthony Ramos, Corey Hawkins, Leslie Grace, Melissa Barrera, Olga Merediz, Daphne Rubin-Vega, Gregory Diaz IV, Stephanie Beatriz, Dascha Polanco and Jimmy Smits. At the Music Box Friday, June 11 and on HBO Max for thirty-one days from theatrical release. 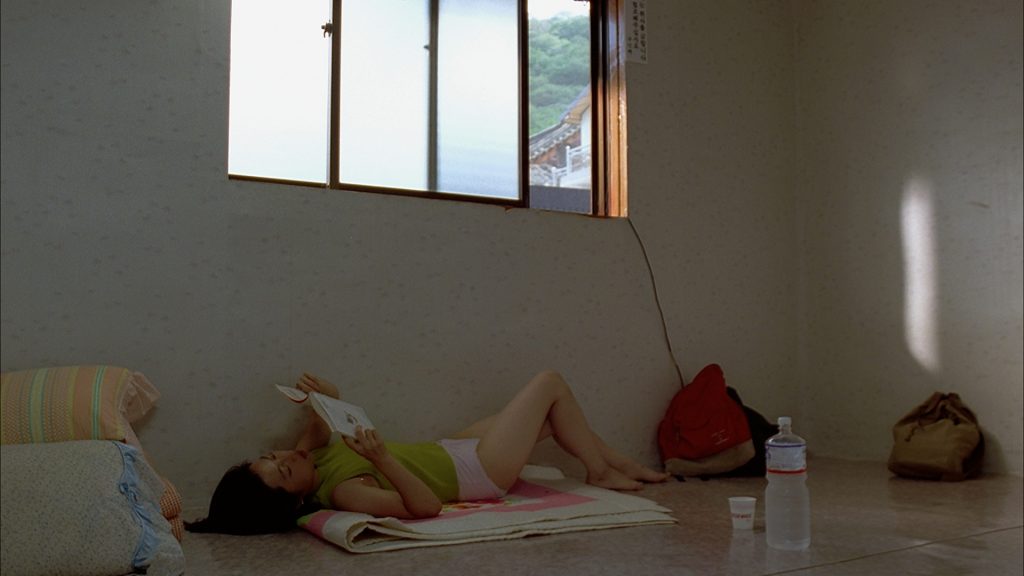 “The Power Of Kangwon Province”

South Korean director Hong Sang-soo has signed at least twenty-five features, and the SAIC graduate had already made his mark with his cannily constructed second feature, 1998’s “The Power of Kangwon Province.” Two stories take place in the same geographical location, a mountainous area in the northeast of South Korea. We learn more about the involved-not-involved man and woman in each portion, but also the potential for scary serendipity: Hong’s geometry is always fateful but hardly heavy-handed. Hong’s precision, all these films later, still makes his increasingly confined, intimate stories into the glories they are: man, woman, miscommunication, soju, and ever, “carnal ignorance.” (Plus a murder investigation, by the way.) The world of Hong is our world, too. This is a new digital restoration with new and improved English subtitle translation. Film Center From Your Sofa, June 11-July 8.

Thomas Morgan’s documentary “Tomorrow’s Hope” is a portrait of educators, students and parents on Chicago’s South Side. Three high school seniors were in the Educare preschool’s first class, and the film looks toward the continuing effects of early childhood education, “exploring the continuing effects of early childhood education as they navigate their way through difficult circumstances.”…”While the Educare Early Education Center is going strong,” the distributor advises, “we learn about its utterly harrowing yet remarkable early stages as ‘the Beethoven Project’ located within ‘Forgotonia’ – a name the film’s Portia Kennel uses to describe what was at the time the largest housing project in the world.” Streaming virtually via the Music Box from Friday, June 11.

The intensely curated and distilled nonfiction showcase, Doc10, returns, in its ten-film, single-weekend format Thursday, June 17 through Sunday, June 20, to the Davis Theater and the ChiTown drive-in. There’s more to tell with movies like Morgan Neville’s “Roadrunner: A Film About Anthony Bourdain,” and Bing Liu and Joshua Altman’s “All These Sons,” about the paths of violence in Chicago. Opening night, at the drive-in, is a pre-release preview of Ahmir “Questlove” Thompson’s “Summer of Soul,” which took the Grand Jury Prize and Audience Award at Sundance. “In the summer of 1969, just one hundred miles south of Woodstock, The Harlem Cultural Festival was filmed in Marcus Garvey Park. But the footage was never seen and largely forgotten – until now… With candid footage of the people who came to listen and never-before-seen concert performances by B.B. King, Nina Simone, Mavis Staples, Stevie Wonder, and more, ‘Summer of Soul’ is both a vibrant music film and a vital snapshot of an inspiring moment in time,” writes Doc10. More here.

Chicago Filmmakers presents the thirty-first Onion City Experimental Film & Video Festival June 9-13, both in person and online (where the films are available worldwide with a donation). In addition to virtual offerings, Chicago filmmakers Kera MacKenzie and Andrew Mausert-Mooney [Newcity Film 50] will world-premiere their experimental doc, “Make a Distinction”  an outdoor screening at Chicago Filmmakers. Filmmakers is also working with Roman Susan Art Foundation to host a pair of events, featuring an outdoor looped projection and reception next door to their storefront in Rogers Park. The virtual screenings can be watched at any time between Wednesday, June 9 and Sunday, June 13. The sixty films in competition, programmed by Zachary Vanes, as well as live filmmaker Q&As are listed here.