Have you been inside a movie theater? What did you go see? And if you haven’t been, are you just not ready? I asked over a hundred local film people that have appeared in the Film 50 rankings their feelings in mid-June about sinking into the dark with strangers.

“I caught a member’s revival screening of ‘Clue’ in the Music Box garden,” says Jim Vendiola (“Library Hours”). “It felt like a nice, intermediate stepping stone—the communal cacophony of laughter and shared enjoyment, while maskless in the open air.”

“While I considered going to see ‘Godzilla vs. Kong’ in the theater—because, uh, Godzilla—I ultimately decided to wait for 35mm,” says Cine-File managing editor Patrick Friel. Friel is getting while the getting is good: “My first two back have been ‘Playtime’ and ‘Days of Heaven’ and I plan to see four more of the 35mm Music Box series. It was very good. Felt nice. A relief. Don’t know if there will be many screenings on film coming up, so, taking advantage now.”

“I have not been back in the theater, but I think I’m ready,” says Lori Felker (“Future Language”). “I just need to figure out what to do with my four-year-old. And maybe I’m waiting for ‘Zardoz’?”

“I haven’t been back!” says Northwestern University associate professor Aymar Jean Christian. “I have barely done anything indoors and in public for the whole year. I’m enjoying the day-and-date releases and the flexibility that offers, but I will make an attempt, only for the right film. If I hadn’t already seen ‘Zola’ at Sundance—it would’ve been that!”

“In September, I met up with someone at Longman & Eagle, and after we spent a few hours having drinks and conversation, we went our separate ways,” relates Chicago Underground Film Festival artistic director and Kuma’s Corner manager Bryan Wendorf, who was taken by impulse. “I was making my way home, and I turned and saw ‘Tenet’ on the marquee at the Logan Theatre. I immediately made a beeline and bought a ticket! I haven’t been to another movie since, but I’ve been vaccinated for months and am more than ready.”

Deborah Stratman (“Optimism,” “The Illinois Parables”) says her “last cinema-going pre-pan” was Bong Joon-Ho’s “Parasite.” “I’ve not been back to the dark palace,” she relays, “but last night watched Matt Wolf’s doc ‘Spaceship Earth’ projected in our friend’s side yard—Biosphere 2 as viewed from Biosphere 1—and will be outside again for MacKenzie/Mausert-Mooney’s ‘Make a Distinction’ at Onion City. I’ve been grateful for all the online festival access this past year, but I’ll take a plush seat with big sound and a massive screen any day over home viewing. Here’s to more of that soon.”

“The most disappointing aspect of watching films at home for the past year has been the cinema landscape becoming even more fractured,” says Michael Smith (“Mercury in Retrograde”). “Movies that should have been theatrical releases became available only as virtual screenings and failed to capture the zeitgeist. They became just another audiovisual option and it seems like, as a result, everyone has been watching different things. Great movies need to play theatrically in order to truly matter.”

“I forgot what it feels like to go to the movies and I don’t know if I miss it,” says James Choi (producer, “Saint Frances”). “Access is winning over experience for me. The moviegoing experience outside of special events like festivals just doesn’t feel like a priority. But watching movies and the films being produced now are as exciting as it’s ever been.”

“The last movie I saw in a theater was ‘First Cow’ at the Landmark on Clark, well over a year ago,” says freelance film critic and teacher Jonathan Rosenbaum. “Since then, having forsaken cable TV for the more selective pleasures and possibilities of Hulu on my laptop, I’ve also been scouring YouTube and its lesser-known Russian equivalent, ok.ru, which often has better prints, even or especially when it comes to Hollywood oldies. Firmly believing that capitalism isn’t necessarily a victimless crime, I continue to enjoy the free viewing made available by various means, which compensates somewhat for having been suckered into buying some of the same movies two or three times—VHS, DVD and Blu-ray, successively,” Rosenbaum confesses. “I’ve also been discovering the rewards of discussing movies on Zoom—not only with frequenters of the Gene Siskel Film Center, but also, this past spring, with some very smart film critics in Croatia. And I’m even looking forward to theatrical screenings in Bologna, at Il Cinema Ritrovato, and in Paris in late July and early August.”

“I just saw Joe Dante’s ‘Matinee’ on 35mm at the Music Box,” says Michael Smith, “my first theatrical experience of 2021, and I wept tears of joy. It’s about going to the movies at a time when the end of the world seems nigh, so it couldn’t have been more appropriate.”

“My first going-back-to-the-theaters experience was taking my ten-year-old to the Music Box to see ‘Godzilla vs. Kong,’” says Kris Rey (“I Used to Go Here”). “It was incredible. The film was great, but more than that was the experience. I knew being in a movie theater was something I’d missed, but I didn’t realize how badly I had missed it. I’m planning to see more movies in the theater in 2021 than I ever have before. Can’t wait.”

“My first in-the-theater-with-an-actual-audience-of-strangers experience was ‘Touch of Evil’ at the Music Box,” says Rebecca Lyon (projectionist, Chicago Film Society, Music Box). “And I actually had feelings while watching it, which is more than I can say for when I watch stuff at home. It was on film, which always just feels a lot more alive to me. And big! That’s a film where it needs to feel like Orson Welles is going to eat you up. And some lady yelled at a guy for being on his phone.”

Tom Palazzolo, self-described “emeritus underground sixties filmmaker”: “I’ll be returning for the popcorn and to watch Jim Sikora get into fights with audience members at the Siskel. Jim doesn’t like to be told to be quiet while watching a film.”

Filmmaker Shayna Connelly (“A Memory Palace of Ghosts,” “Bananas Girl”) says that “movie theaters are one of the places I’ve missed most during the pandemic, but I’m not ready to go back yet. Even fully vaccinated, the idea of being captive in an interior space that isn’t my house is overwhelming. That said, ‘A Quiet Place 2’ is calling my name, which means I’ll make a concerted effort to get comfortable enough to go back. I don’t want to watch that one in the living room with my kids interrupting me every five minutes.” 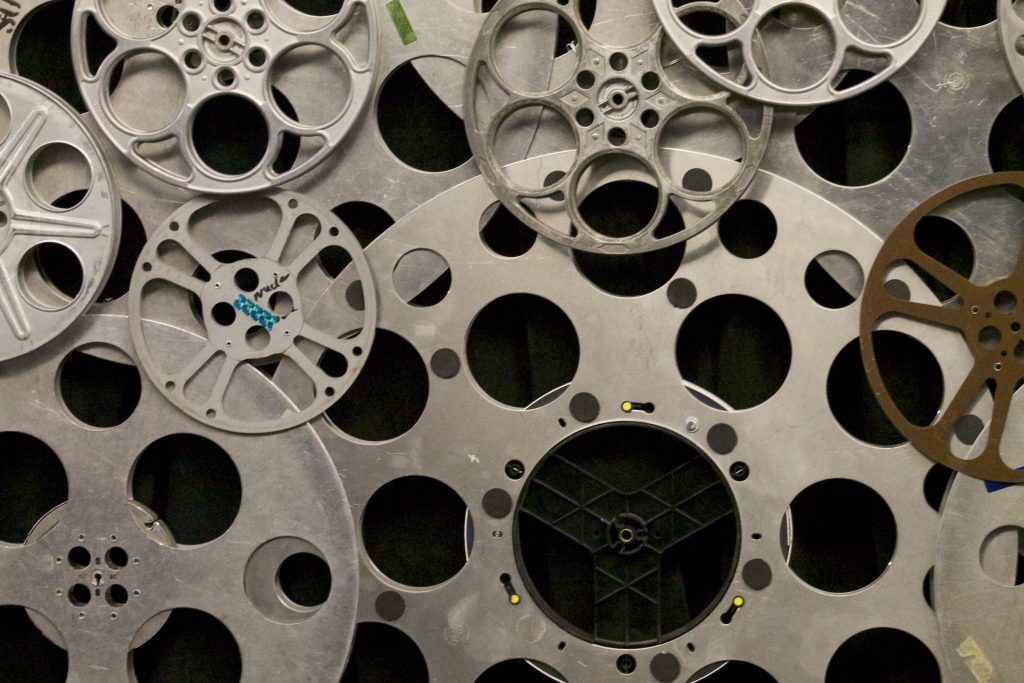 “Things felt sort of tense last summer and they aren’t now,” Rebecca Lyon says of attending shows now at the Music Box. “I’ve seen a lot of familiar faces, gotten a lot of side hugs from people that don’t normally do hugs. I’m definitely ready to return to theaters where I feel comfortable and know the layout.”

“I’m happy to be returning to screenings with audiences,” says Spencer Parsons (“Bite Radius”). “I’ve seen ‘Rififi’ and ‘Godzilla vs. Kong’ and ‘Candyman,’ and ‘Candyman’ was best because of the crowd. I had just seen ‘Candyman’ at home for the umpteenth time to teach it in a class, but the real-time crowd reactions made it a much richer experience. It’s a movie that gives and gives, or I wouldn’t have seen it so many times, but the laughs and gasps and even the negative comments and groans drew my attention to a wider range of details in the film.” Other people brought it to life. “I’ve always been devoted to that crowd experience, but I was forcefully reminded of what I take for granted. When I watch a movie at home, I’m a dutiful student. When I see a movie in a theater I’m a human being, surrounded by other human beings. It’s like that Emerson thing—the difference between a ‘reader’ and a ‘man reading.’”

“I’m still leery of sitting in a large space with an unknown and potentially unvaccinated crowd,” says Laura Harrison (“The Limits of Vision”), but a return to theatergoing would be really nice, of course!” “There are still many films playing at virtual festivals and cinemas,” says Jiayan “Jenny” Shi (“Finding Yingying”). “I will only go to theaters when we are out of the pandemic mode completely.”

“I went to the Music Box to see Jacques Tati’s ‘Playtime,’ thinking that it would be a lightweight, joyous experience,” says Kyle Henry (“Rogers Park”). “It had the opposite effect. Socially distanced, wearing a mask, sipping on my soft drink, I was just really sad from all the trauma of the last year-and-a-half, and really the last four years, and sitting in one of my former safe spaces just brought up a lot of emotions. I walked out halfway through, then walked around the Southport neighborhood and did some deep breathing and cried a little.” The feeling may pass, Henry thinks. “I’ll go see films again this summer in theaters, so perhaps this was just a first response, but I don’t want to see the theater as a compartmentalized space of delusional retreat. Yes, joy is important, but I found a lot of joy in long hikes over the pandemic in forests. I’ll support art-houses like the Music Box and nonprofit theaters like Siskel Center and Block Cinema, but I don’t want to participate in a return to the delusional spectacles of the big box movieplex that I think are partially responsible for lulling us all to sleep and getting us into so many of the problems of the twenty-first century in the first place.”

“I had spent the last year telling myself that watching movies at home was better,” says Sara Chapman (executive director of Media Burn Archive). “I had a comfy couch, cats, could pause whenever I wanted. I guess I was just telling myself what I needed to believe. My first movie in the theater was ‘Nobody,’ which I saw about a week after becoming fully vaccinated. I was unprepared for how great it would be to watch a midnight movie with, if not a full cheering crowd, at least like, a dozen cheering people. Even just sitting in the dark theater and watching trailers was pretty overwhelmingly amazing.”

“Haven’t been in a theater since March 2020,” says Tim Horsburgh (former director of strategy at Kartemquin), “but I can’t wait to be in a Chicago theater with a huge crowd seeing Ashley O’Shay’s ‘Unapologetic,’ and then the film’s participants Bella BAHHS and Janaé Bonsu tearing the roof off. Kartemquin missed a whole year of in-person Chicago premieres, so this will be like a homecoming. Also absolutely can’t wait to see my kids enjoy ‘Minions’ and ‘Ghostbusters’ in a theater. That’s going to bring so much joy.”

Alex Thompson (“Saint Frances”) says “I have to see ‘A Quiet Place Part II’ and I will go back to the theater every chance I can, every day, if there’s reason to, to see anything. Popcorn, loud noises and air-conditioning is my baseline joy right now.”

Or, as local filmmaker Eric Marsh put it on Twitter, posting a Music Box lobby marquee as proof-of-movie-life, “I just fucking live at the movies now. Never leaving.”