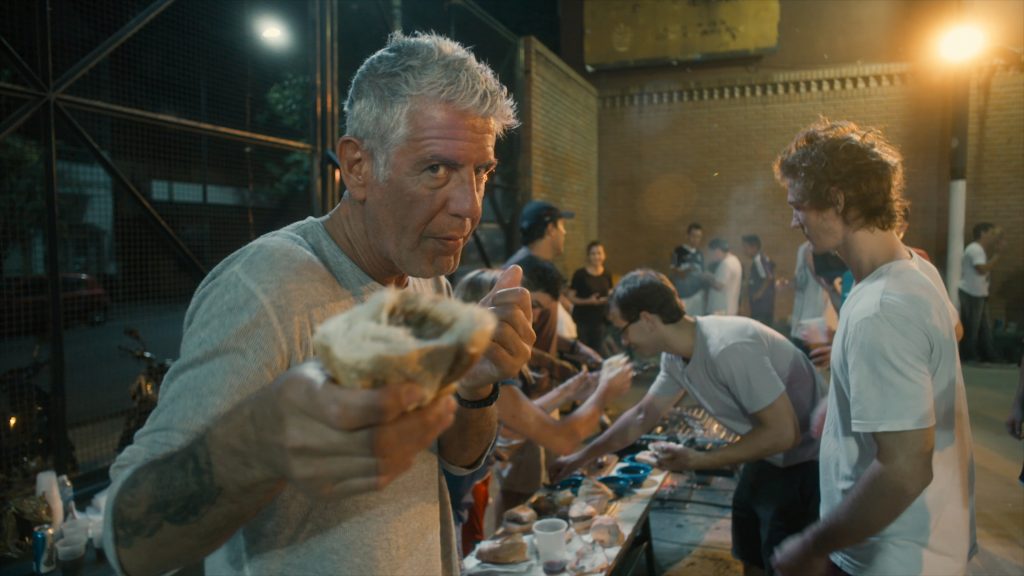 “Roadrunner: A Film About Anthony Bourdain”

This week at the movies, we’re traveling with with Anthony Bourdain in Morgan Neville’s “Roadrunner”; snuffling with Nicolas Cage in “Pig”; ducking what were they thinking with branded cultural product “Space Jam: A New Legacy”; metering the urban circle of spoken-word Sundance sensaysh, “Summertime” and watching the moves of dance process doc “Can You Bring It: Bill T. Jones and D-Man in the Waters.”

“Roadrunner: A Film About Anthony Bourdain,” like Morgan Neville’s earlier “Won’t You Be My Neighbor?” (2018) that properly esteemed Fred Rogers, captures a complex, beloved cultural figure drawn from the base of electrons left behind in the form of telegenic presence, and in the case with Bourdain, a battery of B-roll footage and outtakes that roll into the thousands of hours. Neville makes an intimate epic of Bourdain’s late-booming success as chef, writer, raconteur and empathetic-in-the-instant interlocutor, as well as the hurt, heart and soul not far beneath the surface, along with a vein of his hardly hidden mania and jangle along the way. Bourdain is a vivid presence: he’s right there, he’s right here. He was always narrating his own life, at least the experiential particulars he shared as an eventual profession. The best thing to say about Neville’s compact, dense yet feather-light attainment is that it sings and it stings and stands alongside memory of vigorous Bourdain passages such as the immortal: “Eat at a local restaurant tonight. Get the cream sauce. Have a cold pint at 4 o’clock in a mostly empty bar. Go somewhere you’ve never been. Listen to someone you think may have nothing in common with you. Order the steak rare. Eat an oyster. Have a Negroni. Have two. Be open to a world where you may not understand or agree with the person next to you, but have a drink with them anyways. Eat slowly. Tip your server. Check in on your friends. Check in on yourself. Enjoy the ride.” Opening Friday, July 16 in theaters, including the Music Box. 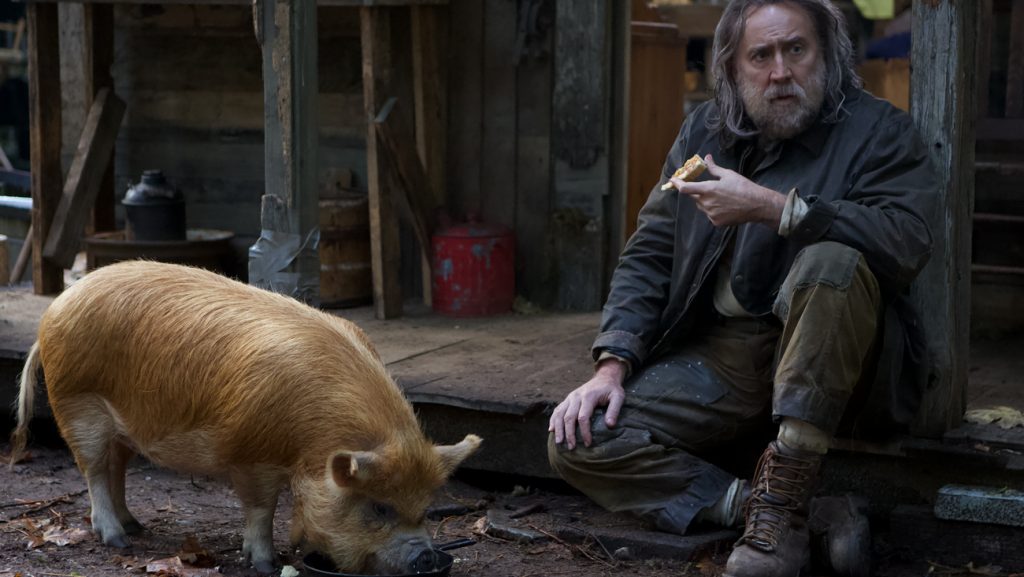 Have we not learned, do not mess with Nicolas Cage? Then now we shall learn, in “Pig,” do not mess with Nicolas Cage’s partner, a gifted truffle pig. Michael Sarnoski’s debut feature is an atmospheric revenge thriller with a Pacific Northwest farmer seeking the return of his stolen pig in Portland. Sounds absurd? Such premises grow fascinating movies. Dare you threaten John Wick’s dog? Honor the pig as well. The farmer had his reasons for leaving, some of which we learn as Cage graces another mid-career surprise. At the Music Box, starting Wednesday, July 14.

With a trailer that plays like highly accomplished satire—think “James L. Brooks’ ‘Shining!’”—Carlos López Estrada’s hyperkinetic, collaborative chain-narrative “Summertime” arrives in theaters bearing a spate of wildly enthusiastic reviews from its 2020 Sundance premiere. Nearly thirty young spoken-word poets, crafting their own material, traverse a Los Angeles day, and while “Summertime” shares that fashion of canvas from Richard Linklater’s twentieth-century-Austin-underground-figures-take-the-street “Slacker” (1990), López Estrada’s form is far from the asperity of that film’s cool gaze (and nonexistent budget). With constant motion and relentless declamation and its leaping from theme to theme, as well as bold colors and bolder sentiment, the mercurial “Summertime” will be sublime to a particular audience—poetry-scene youth who, like theater kids, deserve affirmation in those years that flush and rush and blush before the discovery of authentic voice. Youth is always overlooked and underestimated; talent, one prays, given a proper showcase, may someday shine. As a mentoring soul in “Summertime” puts it, “All I ask in return is that you fly.”(López Estrada’s previous feature was “Blindspotting,” set in another city but also bristling with political concerns.) Landmark Century, starting Friday, July 16. 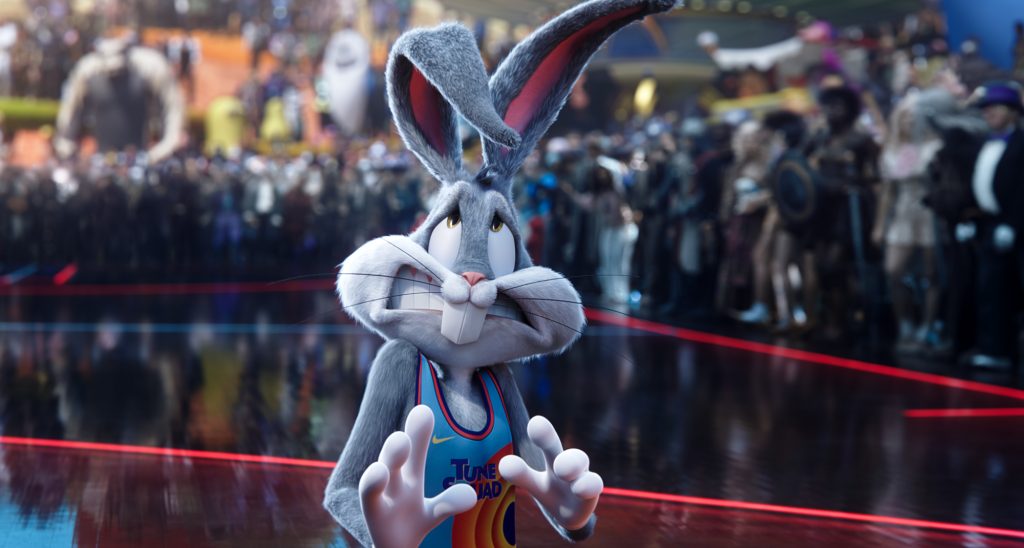 Previewed after deadline, “Space Jam: A New Legacy” by director Malcolm D. Lee (“Barbershop: The Next Cut,” “Girls Trip”) comes from a screenplay with the longest credit block in memory: “Screenplay by Juel Taylor & Tony Rettenmaier & Keenan Coogler & Terence Nance and Jesse Gordon and Celeste Ballard; story by Juel Taylor & Tony Rettenmaier & Keenan Coogler & Terence Nance and Terence Nance [sic]; based on ‘Space Jam,’ written by Leo Benvenuti & Steve Rudnick and Timothy Harris & Herschel Weingrod.” (Ampersands indicate work done adjudicated as done by a team.) Of the final product, Warner Bros. writes, “When LeBron and his young son Dom are trapped in a digital space by a rogue A.I., LeBron must get them home safe by leading Bugs, Lola Bunny and the whole gang of Looney Tunes to victory over the A.I.’s digitized champions on the court: a powered-up roster of professional basketball stars… The ready-for-action Tunes destroy convention, supercharge their unique talents and surprise even ‘King’ James by playing the game their own way.” Other live foils include Don Cheadle, Khris Davis, Sonequa Martin-Green, Cedric Joe, Jeff Bergman, Eric Bauza and Zendaya. Starts July 16 in theaters and on HBO Max for thirty-one days.

Rosalynde LeBlanc and Tom Hurwitz’s “Can You Bring It: Bill T. Jones and ‘D-Man in the Waters’” anatomizes the creative process that led to choreographer-dancer-director Bill T. Jones’ 1989 ballet “D-Man in the Waters,” an important work of art to come out of the AIDS crisis. “As a group of young dancers in the present reinterpret the work, they deepen their understanding of its power: exploring what is at stake in their own personal lives in order to commit and perform it successfully.” LeBlanc and Hurwitz collage interviews and archival material with footage of the recreated work. Virtually via the Music Box from July 16.