Releases scheduled for theaters this week include the heartwarming Sundance sales smash “CODA“; the stomp-and-romp Chilean musical “Ema“; Jennifer Hudson’s impersonation of Aretha Franklin in “Respect“; the claustrophobic horror of “Don’t Breathe 2,” and matinees return to the Music Box, including the necessary inside baseball of the history of film distribution in “Searching For Mr. Rugoff.” Also: the expansion of the Chicago International Film Festival’s Industry Days with the Chicago Industry Exchange and CIX: Lab; producer Mike Medavoy on Terrence Malick, whose “The Thin Red Line” is streaming on Hulu; and super-producer Jason Blum, opposing the shifts in compensation for filmmakers in light of the Scarlett Johansson-Disney fracas. Blum supports Johansson and other above-the-line talent, like himself, who participate in profit under the long-established model that Disney appears to hope to burst. But Blum’s taking a flat fee, against his own philosophy, for producing the soon-to-shoot $400 million Universal-Peacock “The Exorcist” trilogy.

“CODA,” Sian Heder’s 2021 heart-warmer opens on screens as well as worldwide streaming. It’s a remake of “La Famille Bélier,” a 2014 French box-office success. The American setting finds seventeen-year-old Ruby, the only hearing child of deaf adults, or CODA, in a Gloucester, Maine fishing family, has the makings of a musical prodigy. With Marlee Matlin, and fellow deaf actors Troy Kotsur and Daniel Durant, and Emilia Jones. The Hollywood Reporter cover-storied the film as a “breakthrough in representation”: “Buoyed by its $25 million record-breaking Sundance sale, ‘CODA’ is primed to become a new cornerstone in what is shaping up to be a watershed moment in disability representation in Hollywood. ‘To have a hearing actor put on a deaf character as if it was a costume, I think we’ve moved beyond that point now,’ says Matlin. ‘We’re talking about a new generation of viewers.'”Opens Friday, August 13 in theaters and globally on Apple TV Plus.

Pablo Larrain’s movies find their own syncopation (and sometimes hysteria): “Neruda,” “No!”,” “Jackie,” and now “Ema,” a feverish, widescreen horror musical of adoption gone awry, lust and destruction as a dancer’s life spirals down, down, down.

Chilean-American composer Nicolas Jaar provides a gulp and a thump of a score that whole-heartedly suits a dance musical that embraces polymorphous potential and the capacity for chaos. Design and colors and bold, unlike the American standard of teal and teabag exemplified by Marvel product. “Ema” is a searing and seductive melodrama with much music, and performances that are both calibrated and raw by Gael Garcia Bernal and especially Larrain’s incandescent lead, the furious Mariana Di Girolamo. Hello, fire. Hello, chaos. Opens Friday, August 13 at the Music Box.

Chicago-born Jennifer Hudson performs as Aretha Franklin in “Respect“; considering Franklin’s notorious protectiveness of her image and irascibility toward work that disappointed her, such as the filming of her 1972 church sessions in the documentary “Amazing Grace,” it’s a wonder she approved her early life settling into the biopic template. In theaters.

Donald Rugoff was one of the legends of the mid-century distribution and exhibition of art-house movies in the United States, but is mostly forgotten, known mostly via handed-down stories from those who knew him or worked with him. That is, at least until Ira Deutchman’s feature doc, “Searching For Mr. Rugoff.” His New York City theater chain was called Cinema 5—hear the incantation: the Beekman, the Gramercy, the Sutton, the Paris, the Plaza, the Paramount—and his distribution company of the same name thrived on both taste and innovation (especially in bold promotions). Rugoff’s titles included “Gimme Shelter,” “Swept Away,” “Monty Python and the Holy Grail,” “Scenes from A Marriage” and “Z.” Deutchman, later a distributor of import himself at films like Fine Line, had worked for Rugoff, and “Searching for Mr. Rugoff” looks for the man and the motivations behind the exceptional taste and even more exceptional personal mayhem. Music Box, Sunday, August 15. 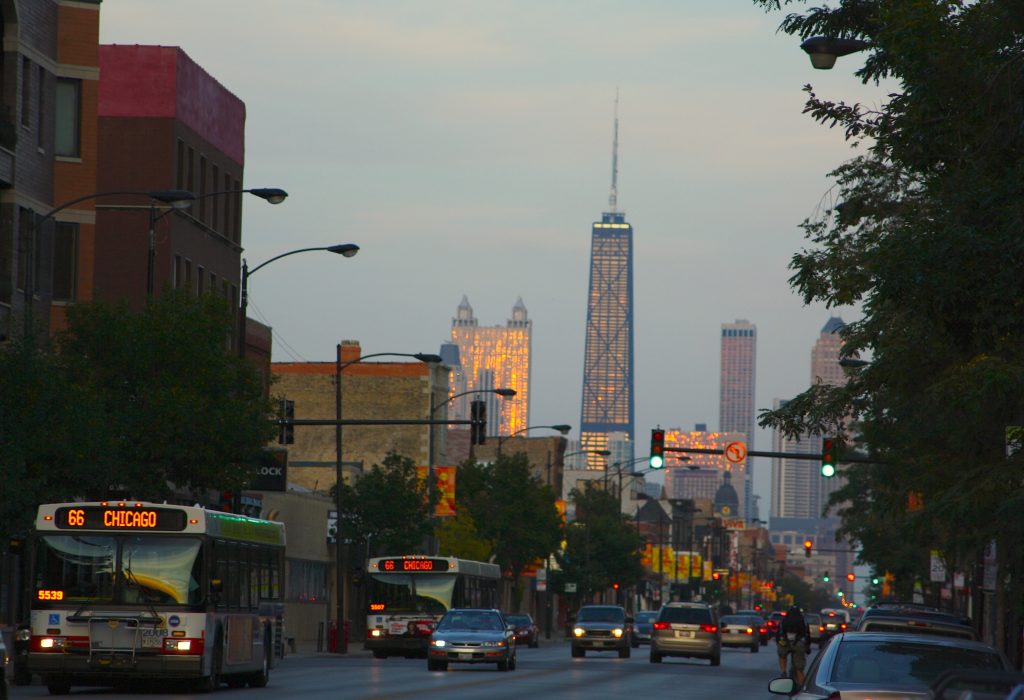 After hearing about the launch of the Chicago Industry Exchange (CIX), the new name for the Chicago International Film Festival’s year-round industry programming, along with the launch of a yearlong creative development lab, CIX:Lab, I emailed CIFF and Industry Days senior programmer Anthony Kaufman to ask why this is the time or the opportunity to move into this venture? And does it logically grow out of Industry Days, or is it a light-year leap toward something else? “The decision to launch a creative development lab came out of a few specific needs, hopes, and learnings after working at the Chicago International Film Festival and running Industry Days for the last seven years,” Kaufman tells me. “After watching dozens of dozens of indie films made in and around Chicago, I felt like the community could benefit from more script development, film development and knowledge of how the industry works, as well as building bridges to the coasts. There’s a strong history in this city of filmmakers making movies in a DIY way, and learning successfully through that process, and eventually finding careers by being prolific.

“But I think the entertainment industry is different now, and that kind of career path is much harder to pull it off. There’s so much exciting talent in Chicago, and specifically diverse talent and people of color,” Kaufman says. “I feel like it makes sense being in Chicago and a significant film institution in this city to help a diverse body of filmmakers reach their potential. And the industry is hungry for these types of stories and these types of filmmakers, and we should be a part of showcasing them and nurturing them. The Lab came out specifically from a grant from the National Endowment for the Arts, which I think also wants to be part of promoting change and equity. This really is a natural outgrowth of Industry Days, which takes place at the Festival every year. But I never felt like we could do enough for the filmmakers with a four-day conference. By being able to focus on projects for an entire year, it’s a much more substantial way to work with key emerging talents. Panels are great, and we’ll be doing a bunch of talks again this year that I know will prove inspirational and important to people, but it’s really exciting to be able to work with filmmakers for months.”

Terrence Malick’s 1998 war epic, “The Thin Red Line,” a chamber hallucination on a vast canvas, and his return to filmmaking after a nearly twenty-year vanishing act, is on Hulu. How did a recluse like Malick, someone out of studio circles for two decades, get to make such a contrary, liberating picture? At the time of the film’s release, I asked producer Mike Medavoy, once agent to both Steven Spielberg and Malick, to trace their personal history: “I met Terry somewhere around 1967. I was in Monte Hellman’s office, I was reading upside down, as a good agent will do, a treatment on Monte’s desk. After like two paragraphs, I turned it around and looked at it. It was really well-written. I found him at the American Film Institute. I wanted to be his agent, he said he’d let me know. The next thing, five of my friends are calling and asking who this Terry Malick is who’s calling and asking about me!”

While Medavoy conceded that Malick is difficult, the veteran producer also saw him as a protected species. “It’s obvious to anybody that this is a really profound mind, this is somebody that feels deeply about humanity, deeply about religion, y’know, feels deeply about life. He was an Oxford grad, taught philosophy at MIT. Really well-read. A guy who goes off and watches birds.” Is that what he did for twenty years? “I don’t know the exact reasons why he decided not to make films. I’ve asked the question and the answer was, ‘I didn’t intend to stop for twenty years.’ I don’t know if it’s true or not. I’ve come to the simple fact that I don’t care whether he wants to work. All I know is if the guy says to me, ‘I want my privacy, I don’t live here, I don’t want to be part of this,’ I accept it.”

Sony, the film’s original financier, expressed concern over Malick and the $52 million budget. Did Medavoy have worries? “I’ve done 300 movies and I would say that the really good ones took a lot of courage, the really bad ones didn’t take any courage at all, just a matter of stupidity. You should have been there, taken a gun and given it to me, told me how to use it. The great ones were all turned down, ‘Cuckoo’s Nest,’ ‘Platoon,’ ‘Dances with Wolves.’ You can go on and on. I wanted to do a Terry Malick film. This was the opportunity for me to do it. I look at filmmaking a little differently than other people. I am like somebody who facilitates someone else making a film. You go with that vision. He made the movie as he saw the footage evolve. In the final analysis, once you’ve made a decision to back someone, that’s it, you’re stuck. But I’m proud of this movie. It will outlive me. There are unpredictabilities about Terry, but my own sense of what Terry is? He’s a philosopher.” (Malick, who will be seventy-eight in November, reportedly has multiple movies in post-production.) “The Thin Red Line” is streaming on Hulu.

Disney continues to take a hard line on its contract with Scarlett Johansson over compensation for box-office flop “Black Widow,” which does not bode well for future compensation by studios and streamers for those who are nearer to the back of the line for compensation. Innovative producer Jason Blum talked about this in plain terms with Kim Masters on KCRW’s “The Business” as well as about his own compromise in taking a flat fee without residuals for an “Exorcist” trilogy directed by David Gordon Green (who collaborated with Blum on the “Halloween” retread and “Halloween Kills,” opening September 8.). The trilogy is targeted for theaters, but could wind up just on NBC Universal’s nascent streamer, Peacock. “I’m being a hypocrite because I took the deal that I think is bad for movies,” Blum told Masters. “But this is the model, this is what we’re stuck with. I’m not gonna fight it, I’m gonna take advantage of it.” He agrees with Johansson’s lawsuit, believing that the consolidation of studios into a fistful of huge streamers will hurt everyone in the industry, and by extension, the movies themselves. “I think Bill Gates or Sumner Redstone said, ‘Content is king.’ Michael Eisner said it a lot after that. And in a world where everything we see is being controlled by four steamers, I think it’s very safe to say that content is no longer king. Distribution and data are king. And that’s not good for anybody except the streamers.”