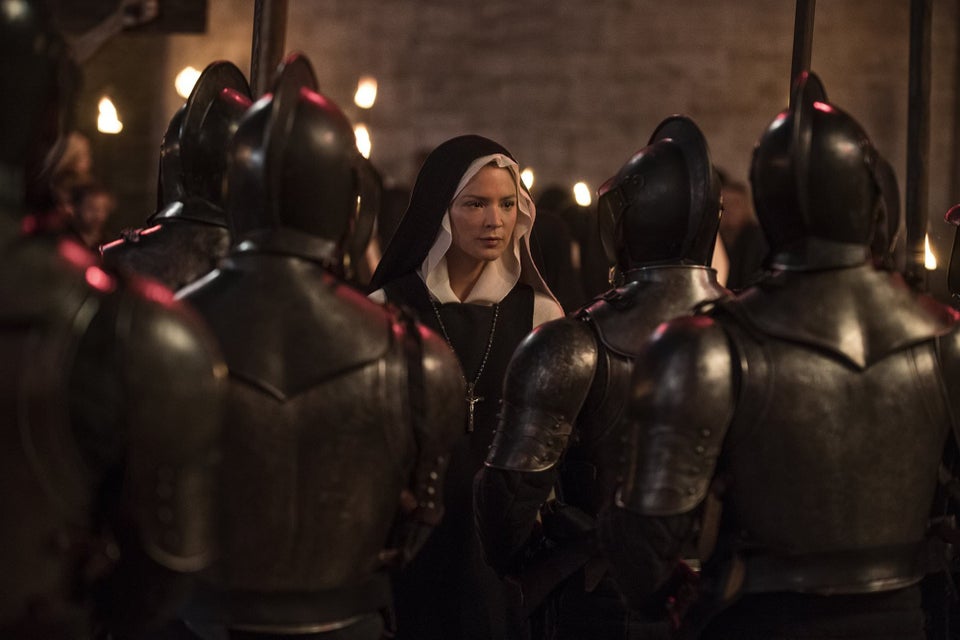 “Benedetta,” a film by Paul Verhoeven

“I just got a check from Spotify for nine cents.”

Blondie musician Chris Stein tweeted that in response to the breaking news of the Walt Disney Company’s open warfare against producer-actor Scarlett Johansson over her lawsuit to correct her compensation for the movie “Black Widow,” the release of which mid-pandemic was a fiscal catastrophe. What had been wrought on the music industry years ago is now setting the film industry on fire. Johansson has been an actor most of her life, and at the age of thirty-six, could continue in “the industry” for many more years.

But the question, more than what Johansson chooses to do with her professional life, is, what, now, today, in the immediate future, and for years to come, is “the industry”? Chicago is an expanding apiary of beehives of frantic production of product, but what will this industry be able to yield beyond hundreds of episodic series each year?

The perception has taken hold by huge corporations that movies are no longer creative endeavors by creative teams, released through a succession of windows that provide revenue for decades (with residual returns to their creators), but product to momentarily affect the stock price of an enormous entity, with creamy bonuses to the highest echelon of the corporate suite. Warner Bros. is releasing its entire 2021 calendar simultaneously to theaters that are open and on HBO Max in the United States for no additional cost to subscribers. (Subscriber counts for HBO Max have soared, relatively.) Disney has released movies that cost upward of $100 million or $200 million, like “Jungle Cruise” and “Black Widow,” to Disney Plus subscribers for an a la carte fee, like a heaping side of bacon, or tofurkey, at the breakfast buffet.

Johansson’s attorneys argue that this wasn’t the deal, that wasn’t the world in which “Black Widow” (and her compensation) was produced. More to point (or points) is the likely slashing of incomes for everyone who works in the industry, not just the most visible figures like Johansson or directors who have challenged the abrupt imposition of new compensation models, like Denis Villeneuve (the upcoming part one of “Dune”).

A highly visible war by a star against Marvel-Disney will trickle down to how movies of any budgetary level are made and how the industry will or will not be sustained. Netflix, which began to buy out residuals when it first ramped up its production levels to the multibillion-dollar streaming river it is today, constructed a first model, in which there is no backend compensation, which unions and other representatives had earned and fought to preserve for decades, but higher pay up front, down to what’s paid to performers who had even a single onscreen line in an episode of a series.

“It’s a huge sea change for everyone,” Kim Masters wrote in the Hollywood Reporter in early August of the epic skirmishes in the fiscal firmament. “You’ll still get a huge payment up front. It’s just not going to be huge home runs any more. And with time, those fees will get smaller.”

Masters’ story appeared the day after a report leaked, via a passage skimmed from a podcast appearance by composer Carter Burwell, that Ethan Coen of the Coen brothers producing-writing-directing team is not just quitting the business, but had already stepped aside months ago. Why, Burwell was prompted, did Joel Coen write and direct the forthcoming “The Tragedy of Macbeth” alone? “Ethan just didn’t want to make movies anymore.” (The duo, however, have “a ton of scripts they’ve written together that are sitting on various shelves,” Burwell said.)

If a film professional on top of their game like Ethan Coen wants to give it a rest, what “industry” is possible in coming months and years at any level? Johansson, you’d think, did “Black Widow” more for money than abject love of the material. When you can’t even run with the bucks…

“It’s an impossible business now,” a genre director I know texted me on the Coen news. “It’s all Marvel and us weirdo hobbyists.” They reflected that even the low budgets exacted by filmmakers like the Coens holds its own host of issues, “all the trouble that goes with that budget. By the late nineties, accepting a low budget stopped being a protection. So many filmmakers their age and older just seem tired of the fight it takes every time.”

What cheering examples are there, if any? Where could a new generation of visionary producers find inspirational examples of the emotional wherewithal to persist on the part of their talent? Can we learn from the elders when a mid-career maker like Ethan Coen turns away from the field? There are visible older directors who, whether through practice, obstinacy or highly skilled producers, persist. To pluck a few, Claire Denis (seventy-five) has had two larger pictures delayed and in each case has made a smaller film and doodled on Instagram; Clint Eastwood (ninety-one) has “Cry Macho,” a generational rodeo movie this month; coming soon is “Benedetta,” the nuns gone mad while cloistered during a plague parable from Paul Verhoeven (eighty-three); and frisky Paul Schrader (seventy-five), has, by his telling, twice been asked to stay off Facebook until his latest, minimally budgeted psychological thriller, “The Card Counter,” opens after its debut at fall film festivals. And on a different scale, Martin Scorsese, who is seventy-nine in November, is making a period epic that inspects events during the formation of the FBI for Apple on a budget that could bear a quarter-billion dollars. Am I looking toward shining lights or glimmering sunsets?

David Cronenberg, seventy-eight, who has not released a picture since 2014’s “Maps To The Stars,” is shooting “Crimes of the Future” in Greece even as wildfires rage through and around the green Hellenic extremities. (The leads of “Crimes” are Viggo Mortensen, Léa Seydoux, Don McKellar and Kristen Stewart.) Like another elder of his generation, John Waters, Cronenberg has said that he’s asked to work, at his age and achievement, on the budgetary level of Canada in the 1980s, but with half or fewer days in which to shoot. (“Crimes of the Future” shares its title with Cronenberg’s first feature from 1970.) In a start-of-production statement, Mortensen is quoted, “it feels like we’ve entered a story he collaborated on with Samuel Beckett and William Burroughs, if that were possible. We are being pulled into a world that is not quite like this or any other, and yet is one that feels strangely familiar, immediate and quite credible. I can’t wait to see where we end up.”

In an ideal world, Cronenberg will lightly dispatch a late-career masterpiece, a movie, a remnant of “cinema,” a provocation, not “product,” an essay of weight and style that will forever more be more substantial than an object of a certain length abandoned to the algorithm or a check from Spotify for nine cents. I can’t wait to see where we end up.