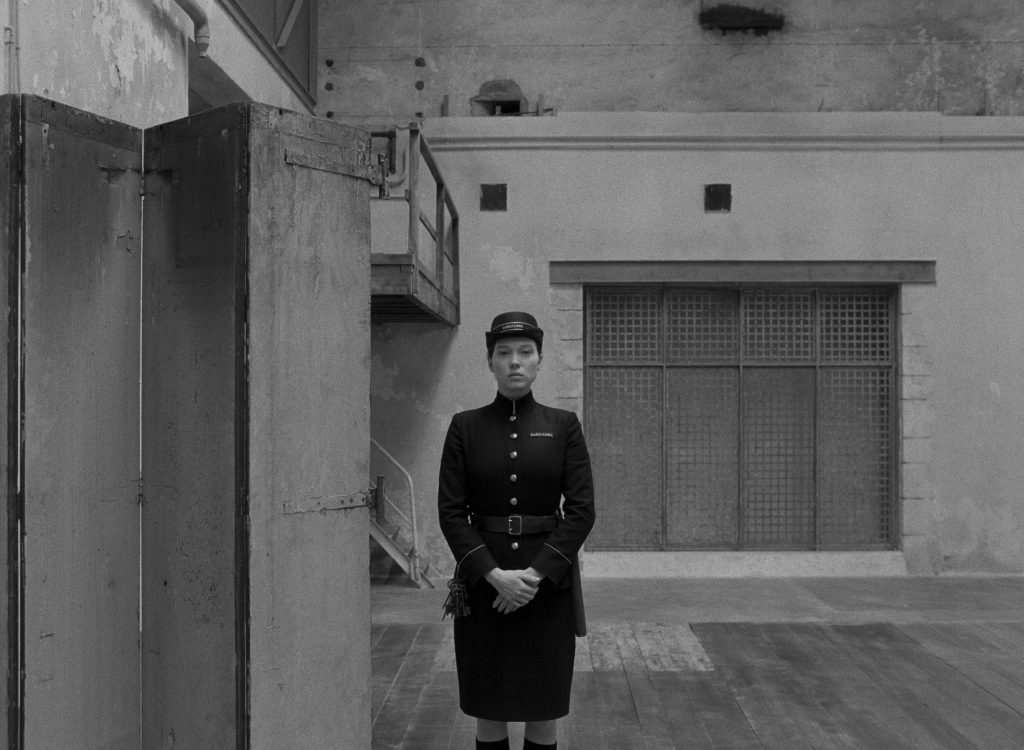 Léa Seydoux in “The French Dispatch”; costume by Milena Canonero

Wes Anderson’s long-delayed adult storybook “The French Dispatch” sails through the mail slot, as does part one of Denis Villeneuve’s intended “Dune” trilogy. Andrzej Zulawski’s beloved berserker of marital mayhem, “Possession” arrives via Metrograph Pictures and the Music Box in a 4K digital restoration; while a romance of another order is in a reissue of Michael Almereyda’s ethereal 1990s Lower East Side vampire tale, “Nadja.” Three notable documentaries: the frank, intimate “Introducing, Selma Blair,” about the actress’ confrontation with a diagnosis of MS; “Nuclear Family,” the intricate, deeply emotional three-part story of filmmaker Ry Russo-Young’s unusual family; and “Mothers of the Revolution” arrives, chronicling a historic women’s protest that began forty years ago. Plus: the second edition of the AfterImage Film Festival opens this week in St. Charles.

“Dune” opens in IMAX in cities other than Chicago that have multiple IMAX screens, as well as digital formats locally. A possible trilogy from writer-director Denis Villeneuve (“Incendies,” “Arrival”), its potential continuation could depend on how many viewers choose instead to watch on smaller home screens via HBO Max, where subscribers can watch as part of their regular fare for thirty-one days. (“Dune” opened a couple of weeks ago in multiple countries that would likely suffer from pirate copies after the American day-and-date streaming debut.) In theaters and streaming on HBO Max for thirty-one days. 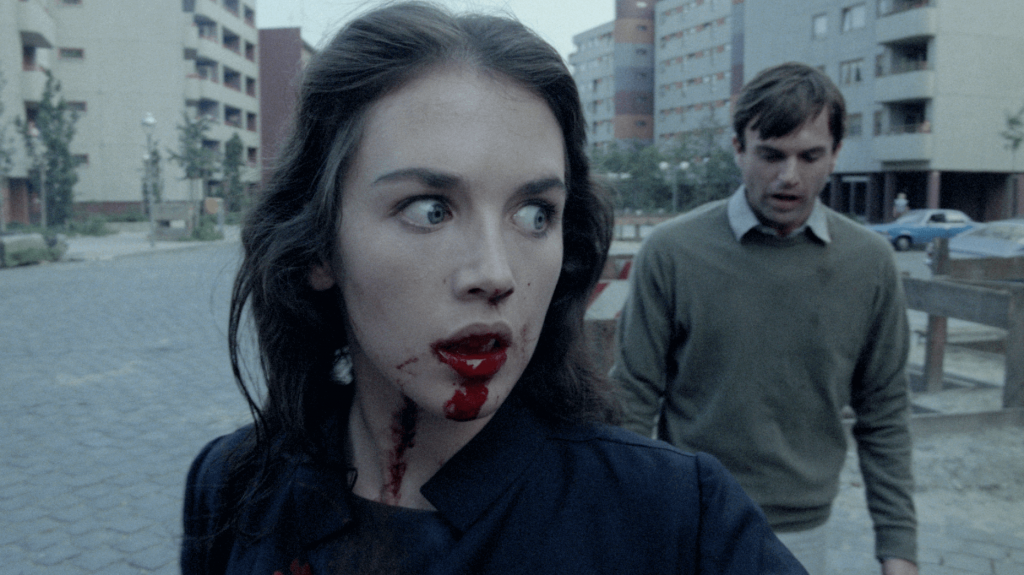 “Possession” (1981) is the vicious motherfucker: Either version of “Scenes From A Marriage”: only vamping. Seen in recent years in battered versions and an only modestly cleaned-up version, this digital version from Metrograph Pictures is the first since Andrzej Zulawski’s passing in 2016. (It’s drawn from a 2020 photochemical restoration.) A young Isabelle Adjani, a young Sam Neill, timeless marital conflict, blood, blood, and everlasting demons are here to play. Few movies attain shrieking madness and emotional horror of this order. See it with someone you’re not sure about. Opens Friday, October 22 at the Music Box. 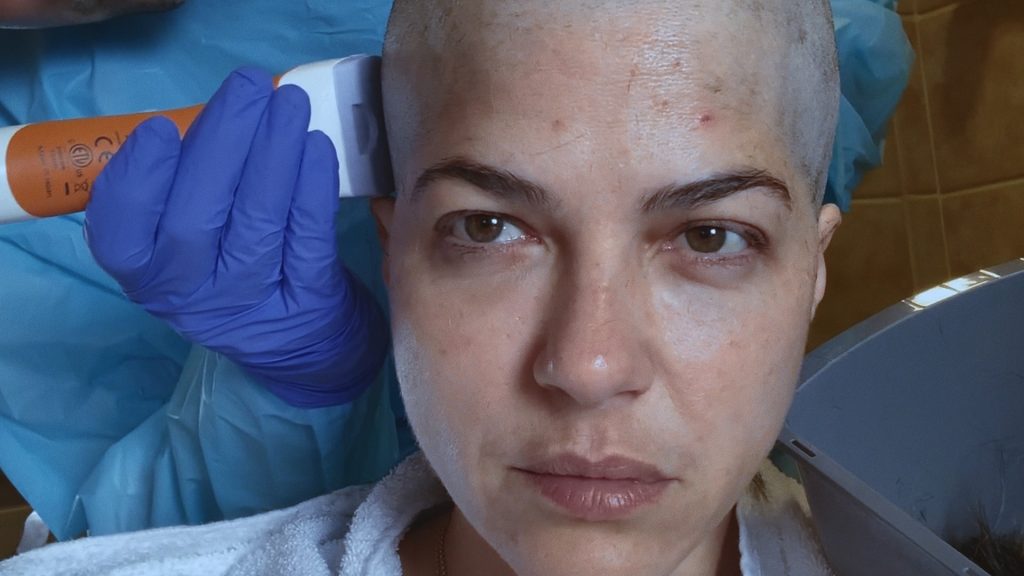 Three documentaries that pack heft and punch: In the intense, anecdotal “Introducing, Selma Blair,” we see the actress sharing her multiple sclerosis diagnosis and working through treatment and reflecting on how to proceed; both her voice-over and her apparent candor before the camera offer powerful moments. (And power.) The winning charm Blair embodies as a performer carries through: a vulnerable yet determined adult confronts chronic illness in a way that is open and uncommon. Theaters and Discovery Plus. 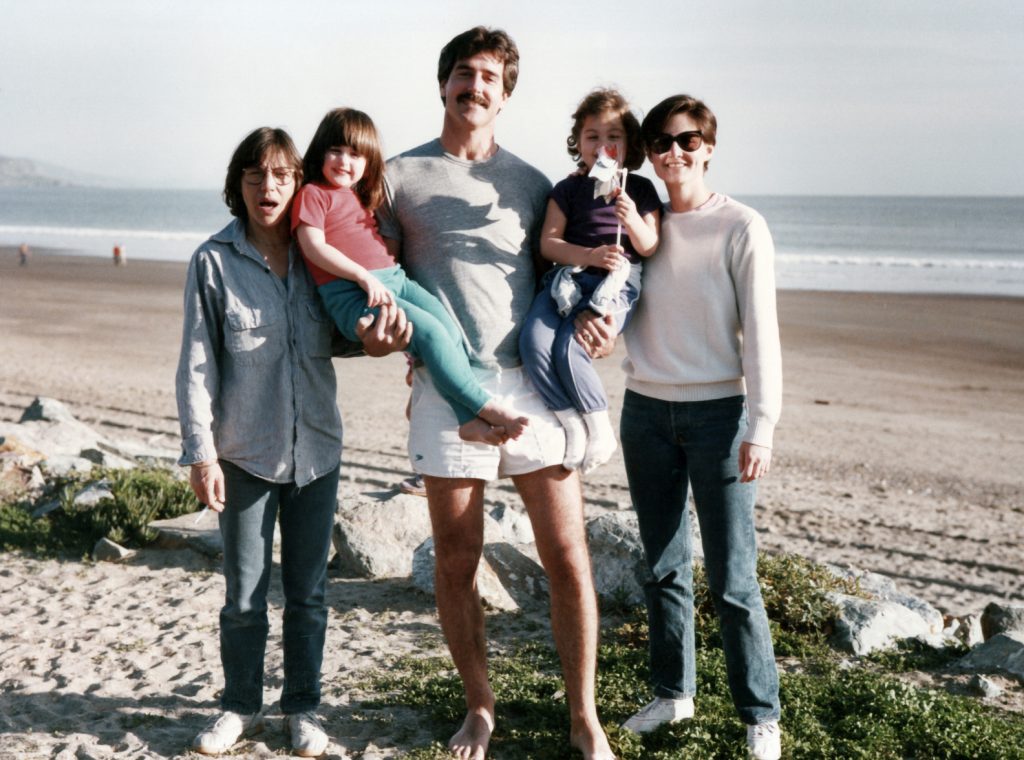 Ry Russo-Young’s “Nuclear Family” is an intricate, beautifully structured family portrait of an unusual family that had already been described when the thirty-nine-year-old writer-director was only a teenager, as the New York Times chronicled the 1990s legal battles that pulled at the child of pioneering lesbian mothers (Sandy Russo and Robin Young). I’m an admirer of Russo-Young’s work as a narrative filmmaker; this deeply personal three-hour documentary illuminates her origins, but also her sensibilities. There are facets upon facets of history and fate and life and the law to digest. (There’s an excellent interview, including transcript, with Elvis Mitchell from KCRW’s “The Treatment” here.) HBO Max. 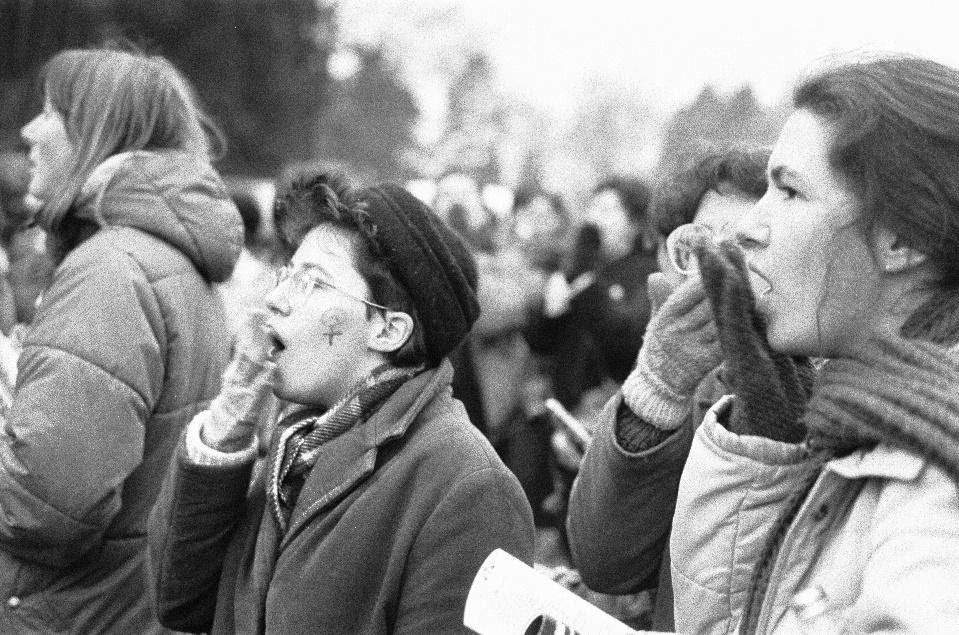 “Mothers of the Revolution”

Briar March’s stirring “Mothers of the Revolution” is a feature-length portrait of the women behind the Greenham Common Peace Camp, where, forty years ago, in September 1981, a group of women marched from Wales to Berkshire to protest the store of nuclear weapons at RAF Greenham Common. The filmmakers describe the march as “the world’s first and biggest female-only demonstration, preceded only by the suffragettes.” Narrated by Glenda Jackson, with interviews with key participants including Julie Christie, alongside archive footage, “Mothers of the Revolution” chronicles one of the longest protests in history. Available on digital platforms. 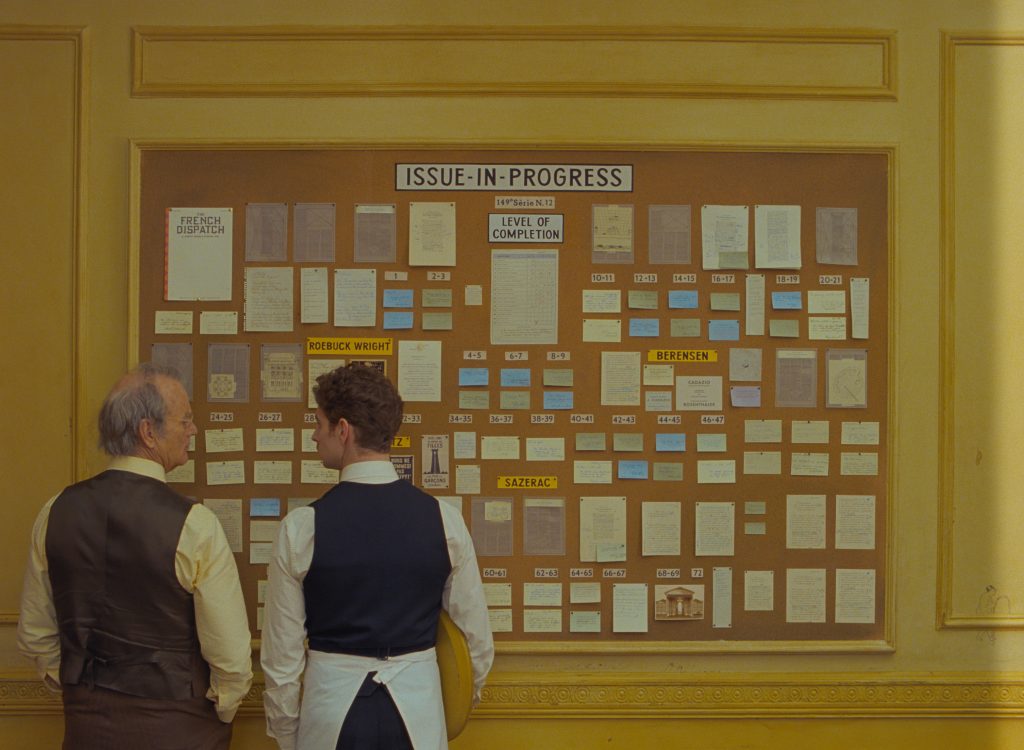 I had a rotten feeling from what little I knew of the tenth movie by Wes Anderson and I was prepared to loathe the portmanteau comedy-drama “The French Dispatch.” Cringing, even as the lights dimmed. But lo, but behold: I was swooning and smitten within minutes over by its relentlessness and its indifference to pleasing (but not to pleasure). It’s got the decadent scent of how I tend to misremember what critic Michael Wilmington wrote was the essence of Robert Altman’s “Short Cuts”: “Jazzy too-muchness.” Shot in the French city of Angoulême, a citadel of comics, or the bande dessineé, Anderson goes beyond the dollhouse or the pop-up book or whatever other things his bursting hothouse frames have been called, and lands straight on the drawing board and bounces rudely off and back again. There’s a compact volume of the early world of Dutch comics master Joost Swarte, “Is That All There Is?” which “The French Dispatch” evokes: “The French Dispatch” is an encomium to incunabula and marginalia and compulsive sketching and drenching details, all that and more. Its carapace is an evocation of the eccentric ways of the New Yorker magazine from its earliest era in the days of its founder Harold Ross and then its second longtime caretaker, the dour Mr. Shawn. The stuff that this movie is made from, however, moves rudely along, saying in its own way about Anderson’s bathysphere immersion into the history of the New Yorker and its eccentrics, fuck that noise. (Mr. Anderson has grown into a genial love of profanity, especially in its most abrupt utility when one is defeated or discontented.) There are footnotable elements by the fistful in every bristling frame, not limited to the history of French cinema: one person may recognize the Joseph Mitchell figure who doesn’t write snacking on a single, characteristically sound-mixed potato chip; another might suss the man at a gangster card table wearing the pale American hat as a flicker of French film master Jean-Pierre Melville, or maybe the black-and-white-to-color coup de théâtre of a jumpcut that’s a loving crib of the epilogue of Andrei Tarkovsky’s “Andrei Rublev.” Mais c’est rien, c’est de la déco!

The larger canvas, and it is large, and will not be described at length here, captures a range of inspired, bone-headed, loopy, naive, resigned attempts to live life in the moment, or merely to capture insolent beauty that is sometimes obstinate and sometimes stupid and always indelible. To take an integral element of every frame, consider the work of seventy-five-year-old costume designer Milena Canonero, who has shelved four Oscars (“Barry Lyndon,” “Chariots of Fire,” “Marie Antoinette,” “The Grand Budapest Hotel”) from nine nominations. The design of every single costume by principal players in this movie alone justify the movie’s existence: these are not ornamental but elemental. They function as fashion, as design, as desire, as characterization in an instant. A blink. And there is a lot of blinking to do. Not only does Canonero dress figures in period emulation and capture the performer’s form but also their character, as surely as a graphic artist can place a figure in their world with a flick of the wrist and few offhand lines. (I would like to see Canonero’s sketches, please.)

There’s a mid-1960s bratty French female figure poised against Timothée Chalamet’s silly mustache and curls of elevated hair that indicates silly but serious revolutionary zeal, played by Lyna Khoudri. It’s not, not just, that Khoudri is attractive and suits a melding of a good dozen or more actresses of the moment (including Anna Karina), and Yé-yé singers (like France Gall), it’s not just the way she stands at her average height or carries the weight of so many indicated icons: it’s that every single thing she’s wearing on screen is geometric perfection: parodic, yes, but perfect, too. A scooter helmet, a pleated plaid skirt, she’s a living caricature, a pen doodle, a welter of iconic gestures. (Even that segment’s allusions to Jean Eustache’s “La maman et la putain” are spot-on in their deshabille.) The city, Ennui-sur-Blasé, is fashioned from frame-upon-frame and box-upon-box and dimensional tricks that draw from so many artists, and yet it is the breath (and breadth) of the too-much cast—Bill Murray, Owen Wilson, Elisabeth Moss, Jason Schwartzman, Fisher Stevens, Griffin Dunne, Wally Wolodarsky, Anjelica Bette Fellini, Anjelica Huston, Jarvis Cocker, Tilda Swinton, Benicio del Toro, Tony Revolori, Adrien Brody, Léa Seydoux, Lois Smith, Henry Winkler, Bob Balaban, Frances McDormand, Timothée Chalamet, Lyna Khoudri, Alex Lawther, Rupert Friend, Cécile de France, Guillaume Gallienne, Christoph Waltz, Jeffrey Wright, Mathieu Amalric, Stephen Park, Liev Schreiber, Edward Norton, Willem Dafoe, Saoirse Ronan, Hippolyte Girardot—that lovingly pummels and beyond all the other peerless pyrotechnics, the costumes they posture within that kept my mouth agape and the eyes moist and in love. What a pile of garments! So much too much! In theaters. 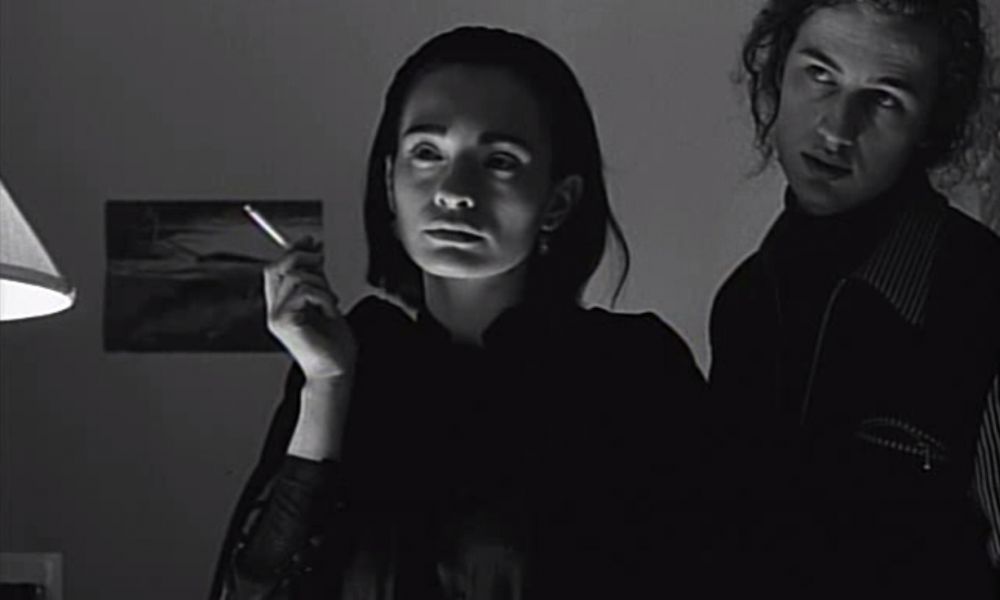 “Nadja” at the drive-in: Michael Almereyda’s little-seen 1990s vampire poesy is at the Music Box of Horrors. Almereyda told me at the time of its release in 1994, “‘Nadja’ isn’t really a horror movie. It’s about as scary as one of those rubber Halloween bats on a piece of elastic. There’s a kind of jokiness to it, a comic aspect that I embraced. The movie ends with a marriage, so in classical terms it’s a comedy. I hope there is a sense of mystery and a depth to it, but I never thought of it as a straightforward horror movie. I don’t even know how it could be mistaken for one.” But the recently prolific writer-director has the air of comedy about almost all of his work. Almereyda has an ear naturally attuned to the effect of music, and he’s also adept at fresh funny, conversational dialogue, filled with cross-purposes and hilariously cadenced. But when I spoke to him at the time of “Nadja”’s release, he was hesitant to separate the spoken word from the flow of a film. “My films are usually about miscommunication on some more-or-less obvious level. People are usually talking at cross-purposes, either contradicting themselves or each other. So when I think about dialogue, it’s really in relation to what’s happening in the movie and in terms of what actions are underway. I think of movies more in terms of directing; dialogue is not free-floating or autonomous. Movies have to do with simultaneous actions or events. Dialogue is a way of connecting the dots, but the real meaning, to me, is seldom in the dialogue. When people are saying something, they’re usually doing something else.” “Nadja”? It’s a portrait in black-and-white of a lost era on the Lower East Side of Manhattan, but it’s many other things, including dialogue drawn directly from a multitude of past texts and the sculptured face in shadow and light of the young Elina Löwensohn. More Almereyda here. Thursday, October 21, details here.

The nearest art-house theater is about thirty miles away, so even though we can’t program on a weekly basis like the Music Box or the Gene Siskel, we feel like the festival is helping bring indie film to an underserved area. For me, it was simply about finding a way to engage with the community. I don’t go to church, I don’t belong to a service organization like Rotary, so I thought: what do I have to offer? What do I know how to do? The simplest answer was: literally what I do every day for a living. When I moved to the area four years ago, I started volunteering with the Geneva Film Festival. The exec director—who had been running it for ten years—mentioned that he was ready to step aside and asked me if I’d like to run it. I said yes, with the caveat that it needed to be its own not-for-profit entity; it could no longer be tied to one town. Incorporating as a not-for-profit meant we could fundraise and grow—something that would have been impossible as the original Geneva Film Festival. With that, the GFF wound down and AfterImage began. (Classic Cinemas’ Charlestowne 18 Theater, St. Charles, October 21-24. Details here.)